When I headed off with a river otter as she went looking for lost human tongues, it helped that I was already heading her way — metaphorically speaking, that is. Increasingly over the past decade, I’ve been stripping the bindings off the history I grew up with. I’ve been absorbing the truth that when my great-great-­grandparents came to what is now southwestern Ontario in the early 1830s, they settled themselves atop an already settled civilization with its own language, customs, and ways of being.

I’ve been learning about that civilization’s creation myths, including the post-flood heroics of a muskrat who dove deep to retrieve a bit of submerged earth, with which to regenerate land on a turtle’s back. I’ve learned that for Anishinaabe like Lindsay Keegitah Borrows, from the Nawash First Nation, humans emerged from animal ancestors, such as otters, who became their clan totems, or dodems. 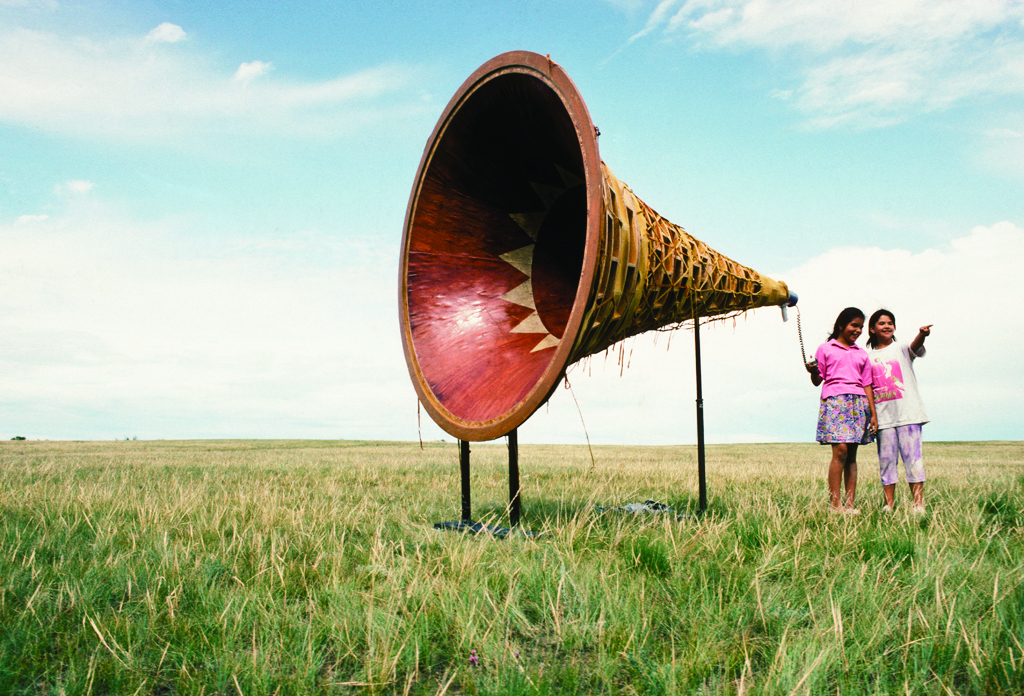 I have also read Eden Robinson, Leanne Betasamosake Simpson, and others from across Turtle Island. They’ve helped accustom me to fully sentient animals and mythological beings walking into stories replete with Cheerios and Spam. Through their work, I can now appreciate that the waters of lakes and rivers are conscious — even capable of texting. And so when the first chapter opened with Otter being borne landward on waves that “spread themselves thin to explore the crevices of the rocky shore,” I was ready to tag along.

I followed as Otter took her cues from the whispering “escarpment voices” and arrived at the Jones cabin near what Ontario’s official map calls Wiarton, on the Bruce Peninsula. (The author’s great-great-great-­grandfather Peter Kegedonce Jones was chief of the Nawash band in the mid-1800s. As a young man, he was also recruited as a supporter of William Lyon Mackenzie in the 1837 Rebellion, though he never saw action.) Otter looks through paisley curtains as young Jane (a figure much like the author) arrives for Thanksgiving with her grandparents, and she listens as Jane describes recent research trips exploring efforts to revitalize Indigenous languages around the world.

This triggers a rich discussion with Joseph (a seeming stand‑in for the author’s father, the respected legal scholar John Borrows), who retrieves a laptop from a table littered with old newspapers and copies of National Geographic. Online, he finds a 1988 Quebec language-rights case citing the importance of language for people’s ability to “structure and order the world around us.” As Otter continues to watch, another visitor enters the house. Siike, a kichi akiwenzie or “man close to the earth,” is an elder. He announces himself as part of the Otter clan, too. Only Otter can see him, though, as he takes a seat and proceeds to tell the story of how his tongue was stolen right out of his mouth. Siike has been searching for it ever since.

Looking over Otter’s shoulder, I sensed that I was entering a story within a story, a more mythical one than Jane’s day-to-day reality. Suddenly, Otter enters this level of story too. Upon hearing Siike’s story, Otter decides to help her human kin. She goes back to the water and dives in, heading first to Nunavut, then to New Zealand, and onward to New Hampshire, Minnesota, and British Columbia.

Borrows describes Otter’s Journey as “an invitation for readers to enter a world that colonialism has suppressed” through an exercise she calls “philosophical fiction.” A blend of Indigenous tradition and Western pedagogy, it reads on multiple levels. On the first level, it is an ambitious if somewhat surface survey of language revitalization and its relevance for the revival of Indigenous law and the possibility of Indigenous-­centred policy actions that could help restore balance to the world.

It begins in Canada, where, according to UNESCO, approximately ninety Indigenous languages are spoken, though three out of four of these are endangered. In 2016, Statistics Canada found that the percentage of Indigenous people able to speak one of those languages had declined to 14.5 percent, from 26 percent in 1996. That year, the Royal Commission on Aboriginal Peoples had recommended federal funding for language revitalization — funding that began two years later. Still, budget cutbacks and the lack of official recognition of Indigenous languages have hobbled success, including in Nunavut, where Otter heads after leaving the Bruce Peninsula. (She embarks on her journey before the tabling of Bill C‑91, the Indigenous Languages Act, in Parliament this past February.) In Iqaluit, an Inuit high school student helps explain the precarious situation: qualified teachers leaving the North, little involvement by non-­Indigenous students, and few immersion programs. Yet, as another Nunavummiuq tells Otter, “The land speaks Inuktitut.”

Immersion programs have proven pivotal to language revitalization elsewhere, including in Hawai‘i and in New Zealand, where Maori has been an official language since 1987. The 1996 census found that a quarter of the Maori population could hold a conversation in the language, a figure that held through 2001 but by 2013 had slipped to 21.3 percent. In her time in New Zealand, Otter attends a Maori Language Week event at a traditional meeting house. She learns details of what works best in language revival, such as the importance of socially integrated speakers and complete family involvement (the model is derived from the linguist Joshua Fishman’s work). Others talk about the ongoing integration of Maori and bilingual instruction in the school system, and web-­based advice on increasing language use at home, on vacation, and at work.

Efforts at language revival in Canada take many forms, sometimes similar: informal “language nest” socials on reserves; apps like the one developed in northwestern Ontario that offers audio recordings and syllabics in thirty categories of Ojibwe, Cree, and Oji-­Cree; formal initiatives like the BC College of Teachers’ certificate for Indigenous language instruction; and publishing programs, such as the University of Regina Press’s bilingual First Nations readers’ series.

Borrows doesn’t go into all these examples herself. She instead moves beyond an overview of language renewal to the “why bother” part of the story. She focuses on language recovery’s connection to reviving Indigenous law and its use, which can have tremendous implications for public policy. In her preface and introduction, she lays out key points: for example, legal concepts are often embedded in the workings of nature, in the meaning and morphology of language itself. She also notes that traditional Anishinaabe stories like “The Rabbits and the Roses” contain important legal principles. Because humans and non-­humans are part of a shared community with mutual responsibilities, the principle holds, not even flowers are to be exploited or mistreated. The language keeps alive an entertaining story as well as serious case law with the weight of legal precedent.

For the most part, though, Borrows lets the story unfold through what Otter sees and experiences. And this is where Otter’s Journey operates on a more mythical level.

A staff lawyer with West Coast Environmental Law in Vancouver, Borrows has engaged in scholarly research in concert with her clan’s dodem. The journey, she further suggests, parallels the post-flood creation story: residential schools and other colonial policies are cast as the latest inundation, with “black-­robed storms” having “deluged” and “submerged” languages, stories, and law for generations. So when she and Otter dive in — whether into the archive or into the water — they’re on a shared mission for everyone living on Turtle’s back, Indigenous and non-­Indigenous, human and non-­human.

When they come up for air in New Zealand, they see that the traditional meeting house, or whare rūnanga, has a mouth-like doorway through which one symbolically enters the body of a Ngapuhi ancestor. Inside, they stand in awe of an elaborately carved structure, as a huge mask on the wall seems to speak. “Your ancestors will help you learn the language,” it says. “Remember us, and you will notice that we are with you.”

Symbolically, the words and concepts that Borrows pulls from her research, and that Otter gathers from Indigenous communities, function as the necessary soil for a renewed world. Otter holds in her paws Inuktitut words like sila, which means weather, and also wisdom, intelligence, and the universe. She has collected Anishinaabemowin words like de, meaning heartbeat, which emerged from the first “feeling sound” in the universe. From this same word, dewe’igan, meaning drum, is derived, and so is dodem, meaning clan and kinship generally, as it combines do (meaning nourishment) with de. Dodoshim means breast, a woman’s breast.

As I read, I marvelled at the different world of meaning this precious soil suggests, as the words name not abstract concepts but life-­sustaining connections, to human and non-­human bodies, to the earth, and through all time. I glimpsed the significance of the traditional Gitxsan spirit song, the adaawk, which powerfully defines territorial claims. It was sung in a Canadian court in 1997 — a performance invoking a deep, and deeply felt, relationship to the land. And I could imagine such linguistic traditions spreading like fecund soil across this country, its nutrients seeping into public discourse. The challenge now is for non-­Indigenous readers to absorb these nutrients and to embrace what this implies for new legal orders and approaches to policy.

Borrows certainly takes a pretty fantastical approach with Otter’s Journey. But the fantastic can be “an extension of the possible,” as Daniel Heath Justice writes in Why Indigenous Literatures Matter, “not the impossible.” The format of Borrows’s book takes readers to that possible place. Story, particularly in oral form, is biased toward participation and identification. It brings us on a journey, takes us inside the experience of language and metaphor, even inside the mouth of an ancestor. As Borrows puts it, echoing what others have said about the wisdom of the spoken word, you become “an agent with the storyteller as you create your own understanding of his story.”

In places, Otter’s Journey is a difficult read, with weighty expositional detail that weakens the mythic alchemy of its premise. Still, Borrows’s characters (and we with them) are able to glimpse the possible: Animal kin renewing life on earth by recovering the languages that still speak an intimate relationship with it. Indigenous stories and legal principles teaching us how to keep such relationships in balance.

At a time of accelerating species extinction — the death of our kin, in an Anishinaabe world view — and of rising sea levels and other inundations of global warming, this book’s journey is well worth taking.

Heather Menzies has written ten books, including Reclaiming the Commons.