The Clean Body: A Modern History

In recent years, water shortages around the world have prompted calls to action, often directed toward the individual: take fewer and shorter showers, launder clothes less often. Increasingly, environmental crises may force us to reckon with our choices — our culture of consumption, unequal distribution of resources, and environmental destruction — but they also prompt us to rethink deeply ingrained ways of living, such as our hygienic practices.

Peter Ward would welcome this reflection. In The Clean Body: A Modern History, he promises to tell the story of the “cleanliness revolution,” offering cleanliness as a lens through which to view a society in transition, whether culturally, technologically, or scientifically.

As I began the book, though, I wondered if it would offer anything new. Writing compelling hist­ory, especially of the recent past, has its challenges. For one thing, there’s often little suspense. From our place in the present, we live in the aftermath of the narrative being told, with the consequences of what has already taken place, and therefore know with a deep familiarity its so-called end. With my hot running water, nearby laundry facilities, and private bathroom with shower and tub, I knew that my reality, one I appreciated if took for granted, would be the conclusion of Ward’s book. I worried it would be akin to trying to impress upon a teenager the impact of the cellphone: “We used to have to make plans in advance and decide on specific meeting places !” 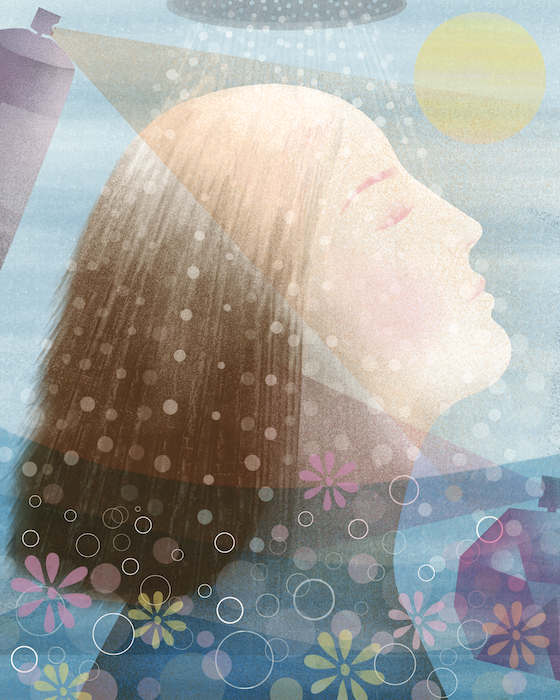 Thankfully, my worries were unnecessary. A professor emeritus of history at the University of British Columbia, Ward has produced an interesting, lucid, and elegantly written account of the development of cleanliness. Beginning in the mid-seventeenth century and ending close to the present, Ward focuses on the larger countries of Western Europe and the United States (with some mention of Canada) and charts how cleanliness, once the sole province of the individual, came to concern community, state, and industry.

It’s true that the general story Ward sketches will be familiar to most. In the past, there were limited opportunities to bathe, and these were almost exclusively available to the rich. The scientific and folkloric understandings of health and disease offered a range of (often contradictory) theories. People lived in crowded cities or laboured on the land, both environments rich with grime and few means of achieving cleanliness. Laundering clothes took a lot of time and labour, and women bore the brunt of this burden. Water management systems and indoor plumbing, along with technological innovations like the washing machine, came along and — well, changed everything.

Beyond this rough outline, though, is a world of engaging detail and persuasive claims about the role of cleanliness as a social construct, one that can tell us much about our habits, values, and material conditions.

Early on in The Clean Body, for example, Ward reminds us of an unsettling fact: France’s Louis XIV, for all his opulence and wealth, took but two baths in his lifetime. A worryingly feeble commitment to hygiene by today’s standards, the Sun King’s practices reflected seventeenth-century European norms, at least those of the wealthiest and most powerful. While nearly avoiding full-body bathing during his long reign, he nonetheless benefitted from a hygienic regime available to few: a morning rubdown by servants, a “ritual morning rinse of the hands in scented water and a wipe of the face every second day with a towel moistened with sprits of wine.” Most importantly, the king had the advantage of changing his linens several times a day, a fact Ward makes much of since, at the time, cleanliness wasn’t primarily demonstrated by clean skin, nails, and hair. “What mattered most,” he writes, “was one’s linen — the layer worn next to the skin — clean, white linen.” If cleanliness was conveyed through clothing, particularly the undergarments, then there was value in making that clothing visible. Over time, “white collars and cuffs crept out from beneath doublets,” while “white linen undershirts burst forth at the neck and peered through openings in jackets and cloaks” as the upper classes flaunted their claim to good grooming.

France’s Louis XIV, for all his opulence and wealth, took but two baths in his lifetime.

To be clean, therefore, was to engage in a performance. That’s also the case now in many ways. In his preface, Ward recalls a morning trip to the British Library, when, squeezed among bodies in a train car, he smells not the expected body odours or sweat but, surprisingly, coffee. “Someone with a more tutored nose than mine,” he continues, “might have parsed the bouquet de Hampstead Village more subtly, sensing perfumes and soaps, lotions and hair preparations of delicacy and refinement.” Put another way, his fellow commuters were somehow odourless, having “lost their scent.”

Cleanliness in the twenty-first century entails not only removing unpleasant odours and dirt but also introducing new, often artificial scents. Like those of the past, today’s hygienic regimes are informed by the scientific and medical understanding of the day, but they’re also a form of social theatre. Consider our air fresheners, dry shampoos, teeth whiteners, antibacterial gels, and perfumes. Consider too our daily showers, our frequently laundered clothes. To be clean may no longer require an artfully displayed undergarment or a team of servants, wine-soaked cloth in hand, but our practices are just as sociably legible. To be clean is to convince others you are clean. Indeed, some people now question whether this modern standard of hyper-cleanliness is actually good for us.

Much of The Clean Body’s history of cleanliness is a story about class. When bathing became a valued activity, the wealthy were usually the only ones who could afford to do it. In the mid-eighteenth century, bathing facilities began to sprout up by riverbanks, in seaside towns such as Brighton, and in spas, but these were costly and marketed as luxuries. Around this time, swimming gained popularity, but it was largely understood as more a recreational activity than a means of achieving bodily cleanliness. By the nineteenth century, however, bathing had been fully adopted as a bourgeois aspiration, if not universal practice, and the chasm between the clean monied classes and the unwashed masses only grew more ­pronounced.

Enter the state. Creating public baths and wash houses that catered to the poor, governments across Western Europe and North America pursued hygiene as a tool to reshape their citizens’ behaviour and moral standing. “English reform rhetoric,” Ward writes, “drew on common tropes about the impoverished: their misery and wretchedness, the links between their physical and moral degradation, and the pathway that cleanliness offered to improved habits, better health, higher levels of self-respect, and greater Christian observance.” Implicit in these goals was the belief that “regular bathing would direct the bather to more orderly ways: industry, thrift, sobriety, and personal ­responsibility.”

As Ward points out, thinking that hygiene would solve poverty was wishful thinking and “confused effects with causes.” If people were dirty, it spoke more to the inequalities that limited their lives than to their lack of moral fibre. Still, this line of thinking gained traction, and in an age of large institutions, such as schools, military barracks, prisons, and hospitals, there were increasing opportunities to use hygiene as a disciplinary instrument. It feels inevitable that a century or so later, fascism took up hygiene as one of its key political values. Indeed, cleanliness has often been employed to perpetuate racism and imperial visions of empire.

Cleanliness has often been employed to perpetuate racism and imperial visions of empire.

Ward discusses the soap trade’s artisanal origins in cities such as Marseilles and Naples and in the Castile region of Spain. He recounts how a handful of companies used novel marketing techniques to become wildly successful multinational corporations that continue to dominate the market today (such as the American multinational Procter & Gamble). As part of their marketing strategy, soap makers continually linked “cleanliness with purity and whiteness,” portraying soap “as a civilizing force, a tool of cultural uplift, a means to cleanse the unclean, even a way to whiten dark skins.” Cleanliness, Ward reminds us, has often been invoked in the service of hideous ideologies and damaging political programs, and his discussion of the soap industry’s courting of white supremacy, while brief, adds an important element to this ­discussion.

From the development of germ theory, to the systematic transformation of water management systems, to the introduction of the home bathroom and heated running water, to the development of the electric washing machine, much of The Clean Body is about major scientific discoveries, infrastructural change, and technological innovation. Ward offers a sweeping, multi-faceted narrative but makes time for the illustrative quotation or intriguing fact. In this work, you would be right to expect exhaustive descriptions of filth: there’s mention of the “dirt cap” left to form on newborn babies’ heads for its purported protective qualities, of the quantity of feces found in London in 1800 (70,000 tonnes) and one hundred years later (400,000 tonnes), of menstruation practices when underwear was still rare and the sanitary pad hadn’t yet been invented (messy!). One man laments being forced to bathe to gain admission to a poorhouse, saying it was “equal to robbing him of a great coat which he had had for some years.” Ward marshals the facts into a larger discussion but, importantly, lets the humans at the heart of his story shine through: we can appreciate their struggles and ambitions, even as we feel removed from them at our distant place in the present.

Or do we? As I read Ward’s book, I couldn’t help but draw parallels between the anxieties of the past and those of the present. For instance, the nineteenth-century cholera epidemics and the resulting fear of crowds called to mind recent measles outbreaks, which in turn made me think of faulty science and its proselytizers (anti-vaxxers, meet miasmatic-theory-of-disease supporters). The 1921 British parliamentary inquiry into the incredible market power of Lever (now Unilever) was reminiscent of today’s conversation over tech monopolies, and Ward’s discussion of advertising in the age of mass consumption almost made me feel nostalgic for a more innocent time when commercials simply capitalized on bodily shame and manufactured discontent.

Our environmental woes too are the logical conclusion to a history of growing consumption, of things as well as resources. As Ward writes, “Once an element of nature, [water] had become a commodity, an engineered product of the industrial economy, . . . its presence in everyday life taken utterly for granted.” If cleanliness has been the story of great change, then I was wrong to position myself at its endpoint. Ward’s book does close more or less with the present, but it’s clear our immoderate desire for spotless clothing, sparkling homes, and long, luxurious baths likely cannot last.