Art and Rivalry: The Marriage of Mary and Christopher Pratt

This is the biography of a ­marriage. It is a slender book, roughly 230 pages, not counting notes and index. Yet with a judicious instinct for the salient fact and a perspective born of sympathy and understanding, Carol Bishop-Gwyn creates something more expansive and profound than appearances might indicate. The marriage was that of Christopher and Mary Pratt, two painters very different in their approaches and styles — the author speaks of her “fire” as a contrast to his “ice”— and both icons in the world of Canadian art. His work is the more sombre in colour, with controlled and precise representations of the landscapes and architecture and signature objects of his native and beloved Newfoundland; these works reside in a distinctive universe somewhere between realism and abstraction. Her approach is decidedly less cerebral, more sensual and rooted in earthly and quotidian detail, represented in vivid colours in a photorealist mode, although darker and rawer subject matter eventually finds its way in.

The marriage of the Pratts spanned nearly half a century, yet for a number of years in the latter half of it, they lived apart. Thereby hangs the tale Bishop-Gwyn chooses to tell, a feat all the more remarkable for its success in that she and her husband, the author and journalist Richard Gwyn, were friends of the Pratts. It could reasonably be expected that occasions arose in the telling when discretion, so to speak, might become the better part of valour. Perhaps they did. But I’d say that Bishop-Gwyn has walked any such fine line with considerable poise and integrity. “There might be readers who will accuse me of trespassing in these private lives,” she says. “However, the Pratts have never turned down the opportunity for media attention. From the time when their children were all at home to as late as 2018, together or individually, the Pratts have agreed to the intrusion of journalists or film crews into their lives.”

Christopher Pratt was the scion of a prominent St. John’s family (one ancestor was the poet E. J. Pratt, a great-uncle). Mary West came from more sedate Fredericton gentry. Bishop-Gwyn suggests that this difference created an automatic clash of values: “Christopher would never be at ease in his in-laws’ home,” notes Bishop-Gwyn. “He’d grown up in a privileged environment too, but the cultured atmosphere of the Wests’ residence — the talk of music, art and literature, as well as their close connections to the heights of Maritime ­society — left him feeling inferior in their company.” The couple met as art students at Mount Allison University in Sackville, New Brunswick, in 1953. He, eighteen, had already indicated a degree of single-mindedness when he abandoned his pre‑med course and announced to his parents his intention to become an artist. She, also eighteen, had ambitions in that direction as well. But in the near term, she was mainly interested in catching Christopher Pratt and making him her guy. 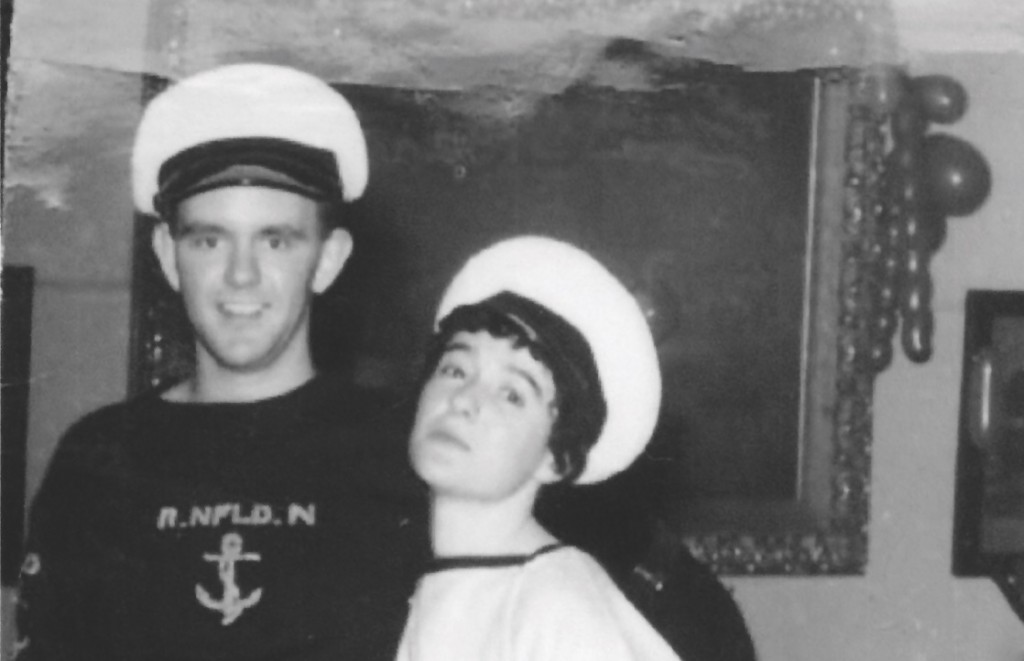 They married in 1957 and spent their honeymoon on board a ship bound for Britain. He was enrolled at the Glasgow School of Art, and she was tagging along — somewhat deflated to find herself expected to wash his underwear on the voyage. When Glasgow did not offer him what he’d hoped for, the young marrieds returned to Canada, first to courses at Mount Allison and eventually to St. John’s, where Christopher received a dual position as teacher and curator of Memorial University’s Grenfell Art Gallery.

An early sign of rivalry between them had appeared at Mount Allison, when the fine arts department kept his assigned self-portrait for its Owens Art Gallery but rejected hers. The self-portrait was a degree requirement. “She chose to portray herself in the kitchen, pouring liquid from a light-brown pitcher into a luminescent green bowl,” writes Bishop-Gwyn, whereas his “depicted him as a dour-looking man with arms crossed defensively, his eyes ­unfathomable.” Mary sent her portrait back home to Fredericton: “Angry at the rejection and jealous of Christopher’s acceptance, she instructed her father to destroy the work.”

Two instructors at Mount Allison who had expressed enthusiasm for Christopher’s talent were the painters Alex Colville, to whom Pratt would later be compared, and Lawren Harris, the son of the Group of Seven painter of the same name. It was the younger Harris who informed Mary that, in a marriage of two artists, only one of them could be a success. Rubbing salt in the wound, he suggested that in her case, quite evidently, that one would be Christopher. Fighting words. Words that must have reverberated in her mind as her own artistic efforts sought fruition.

The book seems neither gloss nor mere summary despite its compact nature. Rather, the arrangement of pertinent biographical detail within its spare framework heightens our sense of the impact of governing social assumptions. And the assumption when the Pratts married in the late 1950s was that the man was king, the one to be taken seriously. Regardless of any career ambitions she might have, the woman was also expected to manage the children and run the household. The Pratts raised four children, and two of them became artists. At forty, Mary also had twins: a boy, born prematurely, lived only a few hours, while the other infant was already dead. Her struggles can be seen as protofeminist, but this is to apply a zeitgeist label to a journey perhaps best defined in more complicatedly personal terms. Moreover, Mary understood her own role in creating this conundrum for herself. “The web was my own,” she once observed of her ­marriage, “and instead of the fly — I was the spider.”

“The emotional distances between husband and wife eventually proved insurmountable.”

While Bishop-Gwyn proceeds chronologically, she starts her book by foreshadowing a crucial inflection point in the Pratt marriage — one art historian described it as the beginning of “an awful Canadian melodrama”— and then returns to that point halfway through. In his mid-career, Christopher Pratt started to pursue two special interests. He took to purchasing larger and larger sailing vessels. And he turned his attentions to life paintings, an interest he had first hoped to explore at the Glasgow School of Art. The life paintings involved nubile young women from the local area. One of the earliest and most important models was Donna Meaney, a teenager who became both his muse and his lover. Donna had become part of the Pratt family as Mary’s helper and an au pair to the four children. The degree to which Mary understood this evolving relationship between painter and model created particular tensions the day Christopher gave to his wife photographic slides that he had taken of Donna as studies. He claimed he no longer needed them.

Mary pondered the motive behind this gesture. It seemed to confirm suspicions they were having an affair. Is that what he was telling her? Her rising anger found expression in her own paintings from these slides, which represented a challenge. She decided to portray the subject in a manner emphasizing the sensual aspect of the pose and not in the cooler and more cerebral style of her husband. She definitely got under his skin. “His irritation was understandable,” says Bishop-Gwyn. “Mary’s nude work was not just better than Christopher’s, but truer to life. With her superior ability to capture the complications of human flesh in paint, Mary had picked up her husband’s gauntlet. The artistic battlefield would be the body of the very woman who had usurped Mary in her husband’s erotic imagination.” The Donna paintings served as a benchmark in Mary’s development both as an artist and as a competitor with her husband for artistic recognition. Christopher was certainly well ahead of her in that last respect, two significant agents of his ascendance being the arts administrator David Silcox at the Canada Council and the art dealer Mira Godard. (Apparently, when Godard advised her client that “green doesn’t sell,” the client listened and concentrated on blue.) Within the fullness of time, however, Mary Pratt too had become a Godard client. Likewise, she would also be made a Companion of the Order of Canada and would receive numerous other honours.

In 1991, Christopher Pratt informed his wife that he no longer wished to have her around at their outport home-studio compound at Salmonier. Mary Pratt refused to accept his edict. She stayed. “Somebody’s up somebody’s down,” she would declare. “Marriage is not really easy; and with divorce acceptable in so many eyes — and so fashionable — it isn’t always the obvious thing to try to find happiness within a continuing ­relationship.” Ambitiously pursuing her artistic aims, she struggled to hang on to the marriage. Yet the emotional distances between husband and wife eventually proved insurmountable, especially after Christopher discovered a new soulmate in Jeanette Meehan, a local woman thirty years his junior who served as his underpainter. This divergence, though, was not allowed at first to completely tarnish the image of the Pratts as a kind of husband and wife “brand.” In the public eye, for a while, they remained a team, even after the fissures in the marriage started taking their toll.

“Life is not a rehearsal” was a favoured motto of Christopher’s. Indeed, though doubts and stumbles materialized along the path, Christopher Pratt’s single-mindedness in becoming a significant artist is obviously a principal theme of this story. But Mary Pratt’s struggle against several tides — including the traditional expectations of a wife and mother — makes her perhaps the more arresting and sympathetic character in these pages. Bishop-Gwyn is even-handed in her appraisals of the two, but it seems natural Mary should most engage the reader’s sympathy. She is also the more candid about her life and in her art. In their later years, Mary Pratt found a new romance with an American art professor, but that alliance lasted only a brief time. The real surprise occurred in 2015, when Jeanette Meehan, by then an artist in her own right, walked out on her marriage with Christopher.

Thus Mary, hobbled by a series of health issues, faced old age alone at her house in St. John’s, while Christopher, now single himself, continued his art in the splendid isolation of his studio at Salmonier. During Mary’s final illness — she died in August 2018 at eighty-three — Christopher paid daily visits. At one point, he is reported to have said, “You’re still a good old broad”— a comment greeted by her with uproarious and delighted laughter.

That remark and that response testify to the enduring ties that bind through the good times and the bad. Love is complicated. The Pratts, one feels, understood this truism very well.

John Lownsbrough is a journalist in Toronto and the author of The Best Place to Be: Expo 67 and Its Time.