Wars are not easy to explain, let alone understand. They rarely have been throughout history, and they are even less so today. Periodic spasms of violence — the brush fire wars beyond our shores that increasingly crowd our screens — have become more indecipherable than the conflicts our fathers, mothers, grandfathers, and grandmothers faced. Most people simply graze their newsfeeds; war becomes stripped of context and reduced to 280 characters, a caustic meme, or a reductive slogan. We chew it into some kind of easily digestible notion — reacting with routine outrage, more often than not — and spit it back out.

Compared with Americans, Canadians have an even harder time understanding why people shed one another’s blood. Our cousins to the south have long presented themselves and their wars with such grandiosity that, for us, a gag reflex takes over. Writing in the Globe and Mail in a 2007 op‑ed, the historian Jack Granatstein labelled this reflex our unfortunate “pacifist mentality.” In our minds, peacekeeping has become the only acceptable form of deployment for Canadian soldiers.

What Granatstein didn’t discuss in that op-ed, and what few other Canadian historians have examined, is the origin of this social revulsion. Does the quiet, simmering resentment in our souls have anything to do with the fact that we have often been called upon to fight the wars of other people? Our history is littered with examples: the Boer War, the First World War, Korea, and, more recently, Afghanistan. Arguably, the Second World War is an exception, for its indisputable moral clarity, if anything about war can be called moral. In the eyes of many, it truly was the good war. 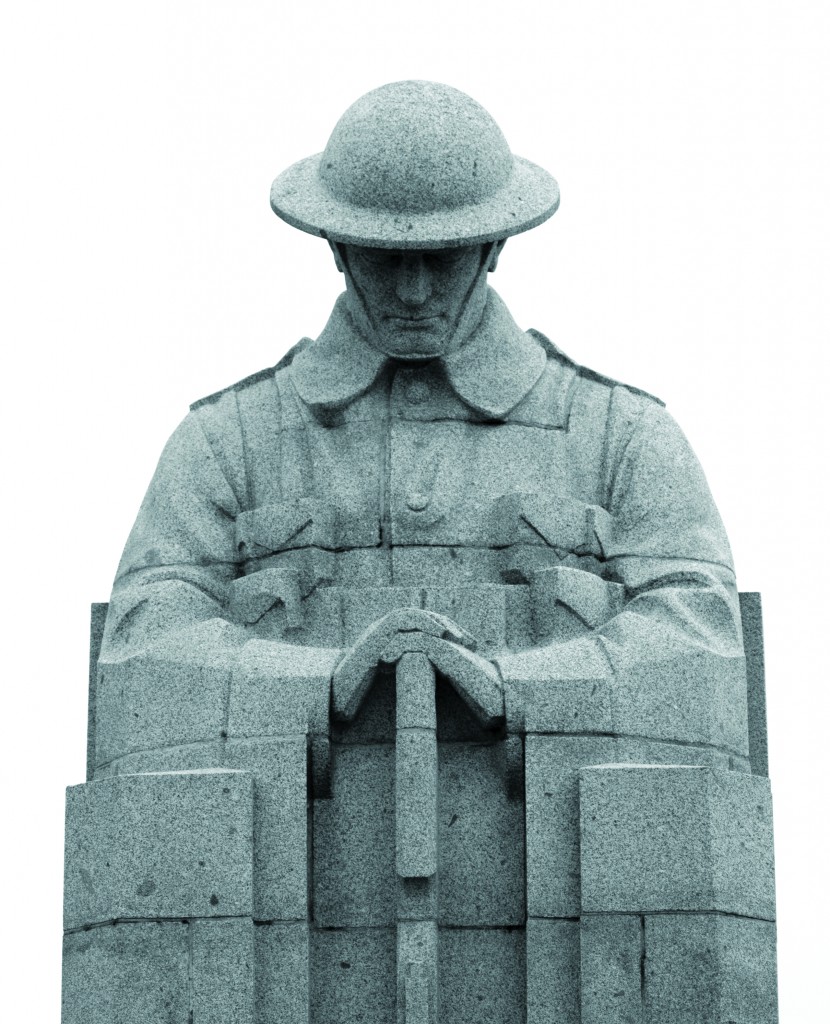 How do we publicly remember?
Image by St. Julien Memorial; Wikimedia Commons

It’s hard to know today how people of its time felt about the Boer War. It is so far removed from our national consciousness, it’s almost as if it happened to some other country. Both the First World War and Korea struggled for popular acceptance. We still venerate them on Remembrance Day, but in accepted political fashion, each is considered an unmitigated waste of life, although they were slaughters of differing magnitudes — wars without victory, peace without glory. In South Africa and Flanders, we were happily, if naively, doing the bidding of our British overlords. Korea appealed to our weary sense of duty to the newly created international order, which we helped forge at the United Nations.

But, as a country, we still haven’t decided how we feel about Afghanistan. As politicians from both sides of the aisle somewhat cynically explained a few years ago, our involvement in Afghanistan was a sop to the Americans after September 11, and a most important one after we refused to follow them into the disaster that was Iraq. Having held a ringside seat to the Afghan conflict and most of its searing social, political, and humanitarian aspects, I can say with extraordinary confidence that most people were eager to forget about that war even while it still raged.

Erecting war monuments in the face of ambivalence and skepticism is uncomfortable. But they are necessary — perhaps even more so when a war settles into a seemingly ambiguous place within the national memory.

Ambivalence, however, can occasionally be deceiving. We were given a visceral demonstration of this last spring, when the Department of National Defence mishandled the dedication of the Kandahar battlefield cenotaph. Superficially, senior officials appeared out of touch, perhaps even self-indulgent, creating a pageant for themselves. But the truth, as Oscar Wilde once said, is rarely pure and never simple. And so it is with the story of the cenotaph.

Because it was considered a soldiers’ monument, built by soldiers for soldiers, they had a sense of ownership over the elegant granite structure. It was their memorial to their fallen friends, and it had stood outside of their headquarters in Kandahar throughout their war, one that was fought with half-hearted public (and sometimes political) support, although the outpouring of grief over the casualties was unqualified. It was a given, therefore, that when the touching cenotaph was repatriated to Canada, it would stand not in a public place but somewhere secure, where they could see it.

Although unspoken, this understanding goes some distance to explain how gobsmacked many in institutional Ottawa were by the controversy that arose when families of fallen soldiers were excluded from the memorial’s opening in early May. Everyone in charge seemed genuinely surprised at the palpable public anger — and they tried to mitigate the slight with a do-over ceremony in August. That’s when Catherine Jane Byers, the mother of Private David Robert James Byers, told CBC News that she had written to National Defence to convey her fury. “We’re the ones that live with this every day,” she said. “We’re the ones that celebrate birthdays. See our grandchildren grow up without a father. That is our reality.” For the families of the dead and wounded, Afghanistan is not some abstract concept or political talking point or institutional pissing contest, which was how it was so often treated during the conflict. Rather, it is a deeply personal event, a war (even though federal government lawyers won’t call it that) with real, life-altering consequences for them and their loved ones.

What has likely not dawned on the denizens of Ottawa is that no one has bothered to explain to Byers, nor the legions of other family members with personal stakes, nor the nation as whole, what their sacrifice was all about. Initially, we were told it was about defeating terrorism. Then the narrative became one of helping the Afghans rebuild and getting little girls into school. With Afghanistan continuing to teeter on the brink of an extremist abyss, more than five years after the last Canadian troops left, and with the U.S. exhausted and the Trump administration scrambling for the exits, the desire for some kind of perspective is almost more evident today than it was when the caskets were coming home.

On the grey August day of the rededication, both the Afghan ambassador and, more importantly, the U.S. chargé d’affaires took pains to emphasize that Canadian sacrifices had not been in vain. In the absence of a declared victory, Governor General Julie Payette did what vice-regents do best and delivered an eloquent address that leaned on the Bible and the tried-and-true sentiment that the fallen had no greater love than to lay down their lives for their comrades and fellow men: “If these words have ­meaning — and I believe they do — then the men and women we honour today loved greatly. What they did was noble and their sacrifice was dear.” It was a well-worn if somewhat old-fashioned ­conviction, repackaged for the modern era and easily squeezed into a tweet. Words, however, are no substitute for a public monument.

“Beyond yearning for the immutable, one can find a healing quality in war monuments.”

There is something about bricks and mortar, something that helps us make sense of the senseless. After the horrors of the First World War, communities across Canada, numbed by the scale of slaughter and the loss of tens of thousands of sons, launched a building boom. Everyone knows The Response, the nation’s war memorial in Ottawa, but few remember that the iconic Peace Tower on Parliament Hill rose from the ashes of the great fire of 1916 as a tribute to the country’s war dead. Even fewer people realize that the dim interior lighting of Centre Block is a deliberate design effect by the architects John Pearson and Jean-Omer Marchand, who wanted to reflect both the sombre mood of parliamentary deliberation and the pall that hung over the nation. The Percival Molson Stadium, at McGill University, came into being with $75,000 from the estate of its namesake, killed near Vimy Ridge. Montreal’s Old Port Clock Tower was meant to honour sailors who had died. In the sweeping Signal Hill suburb of Calgary, you will find the imprint of war at Battalion Park, where the regiment numbers 137, 113, 151, and 51 are set in the ground. Made up of 16,000 stones, they were placed there by soldiers who trained for war in Europe. The original significance of these monuments may have been obscured in the long sweep of history, but their very permanence stands as an elegant counterpoint to the ephemeral lives by which they were inspired.

Beyond yearning for the immutable, one can find a healing quality in war monuments. Our neighbours appear to understand this, but we seem to have forgotten it or, as evidenced last spring in Ottawa, no longer appreciate it. For twentieth-century America, there was no more divisive war than the conflict fought over nearly a decade and a half in Vietnam. It was a war that saw tens of thousands of young men drafted, and it brought tens of thousands of people into the streets. It divided and scarred the nation in ways they are still struggling to understand and forgive. With so much bad blood, it might have seemed inconceivable that within five years of the final painful and humiliating departure of helicopters from the roof of the U.S. embassy in Saigon, someone would want to build a monument to such a calamity. Yet it happened.

Conceived in the late 1970s and opened in 1982, the Vietnam Veterans Memorial in Washington has proven to be a gathering point for both supporters and opponents of that war. There is an enormous power and grace to the sight of 58,220 names (as of May 2018) carved into its black granite face. It was the brainchild of Jan Scruggs, a U.S. Army veteran, who is often quoted as saying he believed it would be unconscionable for anyone to be allowed to forget what happened: “Veterans needed this, and so did the nation. Our country needed something symbolic to help heal our wounds.”

It has been five years, almost six, since the last Canadian boots left South Asia, and nearly nine years since the end of major combat operations. There is, at the moment, no permanent, readily accessible national monument to Canada’s war in Afghanistan. The Conservative government in Ontario plans to build a monument in Toronto, but Queen’s Park did not send young men and women to war — Ottawa did. Stephen Harper’s government etched the dates of the Afghan conflict into the National War Memorial but promised a separate, permanent remembrance in the capital. It has been held up in bureaucratic wrangling, which takes up three-quarters of any good day in Ottawa.

Maybe we shouldn’t be surprised. It took over twenty years of political and bureaucratic arguments for the federal government to build the national memorial, from concept in 1919 to ribbon cutting in 1939. And that was at a time when the country as a whole keenly felt its losses. Yet if there is something to be gleaned from the outcry over the Kandahar ­cenotaph, it is that the nation still feels a small but vital wound over the Afghan war. We may not want to talk about it, and we may not be able to explain it, but such a wound is a sign of enduring virtues. And that should be encouraging in this age of social media smirk, relativism, and overwrought ­activism.

Murray Brewster is a senior defence writer for CBC News, where he covers the Canadian military and foreign policy from Parliament Hill.