Any conversation about money that I can remember from my childhood was about whether we could afford something extra. There was never a doubt in my mind that there would be presents under the Christmas tree or roast beef on Sunday or skating lessons or a new winter coat. And then one day I realized we were able to help people who were poor.

I was six, and Mom piled us all (three girls, about a year apart) into the old Plymouth that had been my grandfather’s. We headed out to a different part of town with a huge turkey. My mother was somewhat evasive when I asked her what we were doing, but she said something about people who didn’t have a lot at the holidays. We were going to the home of a family whose kids went to school with me. Even at that age, I knew that their clothes were always a bit ragged. The strangest part of that outing was that when we pulled up to the house, Mom hoisted the turkey from the back seat and hurried up to the front door, placing the bird on the step without knocking. I don’t know if I fully grasped the lesson at the time, but it stuck with me as I grew up: our responsibility was to help when we could, but not in any way that would embarrass the people we were helping. 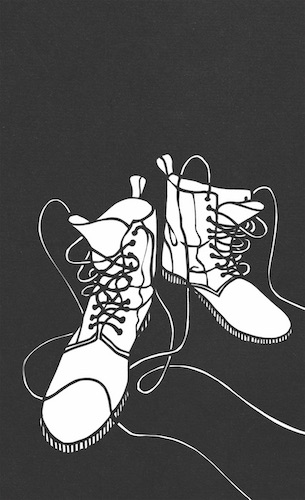 The proverbial boots and bootstraps.
Image by Annyen Lam

Hugh Segal and I are about the same age, but our childhoods were very different. He grew up in Montreal, always knowing that there was not enough to go around. He speaks about this in Bootstraps Need Boots, and about how his childhood experiences sowed the seeds of kindness and decency that grew into his political philosophy.

Born in 1950, Segal was named Hugh after his paternal grandmother. “Hudja had died earlier that year of kidney failure,” he writes early in the book, “the kind that poverty and malnourishment can produce.” His “very low-end, working-class family” lived in Montreal’s Plateau neighbourhood, and his parents rarely fought. “When they did it was about money, usually the necessity or suitability of some expenditure.”

Like me, Segal recalls moments that helped him to understand where his family fit in the city’s economic pecking order. Until his father gave away one of the boy’s treasured possessions to another family who had less, he had not “understood that there were people poorer than we in our triplex.”

With Bootstraps Need Boots, Segal draws a detailed and compelling picture of his early life — one that makes it clear why he has fought his whole career to eradicate poverty. By the time he hit adolescence, an economic philosophy had begun to form:

I realized that poor people had far fewer choices than everyone else. That money pressures took their toll: on relationships, on outlook, on day-to-day life, on parental harmony, and on future prospects. That how well off or connected your parents or grandparents were made a huge difference. That working hard mattered, but it was not always enough.

Segal realized that “being on the cheery edge of poverty is not, as some bootstraps proponents assert, about building character and ambition.” The proverbial bootstraps mean nothing if you can’t afford boots in the first place. It’s a realization that would drive him and fuel his convictions. Financial insecurity, he explains, is at the centre of one’s existence. “Once installed in your memory bank, [it] never leaves.”

Hugh Segal has worn many hats since his days in Montreal: political strategist, television pundit, senator, principal of Massey College. Anyone who meets him, regardless of his or her own political inclination, can recognize that he is a decent, caring, principled man.

Throughout his career, Segal has asked himself, “Can this help make a difference to those outside the charmed circle? Will it matter? Can I be the one to make it matter in the larger battle against the cruel unfairness of the poverty that affects millions in Canada and worldwide? Is it worth doing? Would Mr. Diefenbaker have approved?” It’s by asking these questions that Segal has been a champion — arguably the pre-eminent Canadian champion — for a guaranteed annual income.

“In 2016, I decided, as premier of Ontario, that our government should explore a basic income pilot.”

Of course, there has been a long discussion in Canada about the best way to tackle the persistent reality of poverty. One criticism of existing social assistance programs: they trap people in an intergenerational cycle of poverty, because they are demeaning and never allow for the leg up that could mean a transition out of social assistance. And while the notion of a basic income is strongly associated with today’s political left, its origins can be traced to the progressive wing of the Progressive Conservative Party.

Segal points to the heart of a speech by Robert Stanfield in 1969 and a paper presented by David MacDonald at the Niagara Conference of Progressive Conservatives that same year. He traces his commitment to the basic income through his own political campaigns in Ottawa Centre in 1972 and 1974, when he ran on making poverty a priority and “outlined new ways, including a guaranteed income, of reducing its most serious effects on people, families, and communities.”

Segal and other Progressive Conservatives at the time saw some version of a guaranteed annual income as a practical solution that would ultimately move more people into the workforce, with dignity, thereby benefiting the economy and cutting down on wasteful administrative costs.

In 1975, as a staffer in the office of Ontario premier William Davis, during a minority government, Segal played a pivotal role in ushering in the guaranteed annual income supplement for seniors. “Ontario became the first Canadian province to go this anti-poverty route,” he writes. “The approach spread to other provinces, and was finally incorporated in the federal guaranteed income supplement.” This success improved the lives of millions of seniors in this country.

Forty-one years later, in 2016, I decided, as premier of Ontario, that our government should explore a basic income pilot. I felt it was time to stop talking about what we could do differently and try an idea with demonstrable merit. My first call was to Hugh Segal. I asked him to work with us to design a pilot project that could give us valuable information about what might work to make social assistance in our province more effective, more efficient, and more dignified for those most in need.

The pilot was designed to run for three years and would provide $16,989 per year for a single person and $24,027 for a couple, minus 50 percent of any earned income in either case. In addition to benefiting 4,000 people — in Hamilton, Brantford, Thunder Bay, and Lindsay — it would produce important data on how Queen’s Park might better design social support for people living on the margins. Although the project was cancelled by the government of Doug Ford, elected in June 2018, it was already clear by then that the certainty of a more adequate income was helping participants get on their feet, feed their families, find jobs, and participate more fully in their communities. The Basic Income Canada Network reported, among other results, that 58 percent of pilot recipients had improved their housing situation, 34 percent had used the support to help find employment (because of new access to transportation or child care, for example), 74 percent were able to make healthy food choices, and 28 percent could stop using food banks.

“These are not easy times for those who support progressive public policy.”

Because a formal evaluation of the pilot was never done, we cannot easily draw conclusions from the reported results, nor can we speculate on exactly how the data from the pilot would have changed our social assistance framework. Indeed, the premature cancellation was unexpected, since Ford had explicitly promised during the campaign that the pilot would remain in place.“Ford had campaigned on a slogan of ‘For the people,’ ” Segal writes. “Obviously, this didn’t extend to low-income people.”

In the wake of the pilot’s cancellation, a strong network supporting the larger basic income project is growing across Ontario. Because the program was well designed — and would have provided government with valuable information — researchers, poverty activists, and community groups are determined to keep the idea alive. Indeed, Segal and his team, including the researcher Evelyn Forget, planted a seed in the imagination of everyone in Ontario who cares about eradicating poverty.

These are not easy times for those, regardless of party stripe, who support progressive public policy. We have no option but to search for solutions that can help mitigate the effects of global economic, technological, and climate change on the most vulnerable. The quest for progressive policy has always been a difficult one, but the loss of decency in political discourse and the diminution of fairness as a worthy goal make it even harder. The small-l liberalism that helped shape much of the progress in our country for a century seems to have lost ground to resentment, division, and suspicion of good government.

Yet a progressive vision of society is still possible. Young people, who are the most anxious about the challenges we face, are challenging the meanness of political debate in the United States, and increasingly in Canada. Like the young Hugh, they will push their elders to confront injustice head-on.

Bootstraps Need Boots is more than the story of one man’s place in Canadian politics. It is the story of an idea — the story of fairness. Hugh Segal has persevered in his commitment to a progressive society, and his book helps us all understand more fully what that means.

Kathleen Wynne served as the twenty-fifth premier of Ontario and leader of the province’s Liberal party from 2013 to 2018.