Resisting Canada: An Anthology of Poetry

When Harold Bloom died last October, the word “canon” was suddenly everywhere. Invariably, the obituaries and reminiscences that eulogized or reviled him mentioned The Western Canon — his popular and thoroughly Eurocentric account of Great Books, from Dante to Beckett, with Shakespeare, like God, everywhere and nowhere at once. Well before The Western Canon appeared in 1994, the classificatory impulse had fallen out of fashion in literary studies, especially categorization used not simply to describe but instead to establish an aesthetic hierarchy.

Bloom’s relentless list making is easily lampooned, and his self-presentation verged on caricature, as in this passage from The Anatomy of Influence, published in 2011, in which he spurns Northrop Frye, the great Canadian taxonomist of literature:

Frye’s influence on me lasted twenty years but came to an abrupt halt on my thirty-seventh birthday, July 11, 1967, when I awakened from a nightmare and then passed the entire day in composing a dithyramb, “The Covering Cherub; or, Poetic Influence.”

No matter how preposterous the canonizers, it is easier to reject the canon — Shakespeare and all that — than to escape the problem of selection. Readers can renounce the classics and delight instead in the innumerable worthy books found in all times, places, and languages. But life is short, and decisions must be made. What should we read, and why? Canons guide our choices, keeping us from having to rediscover perpetually the difference between The Spanish Tragedy and Hamlet, or between Mazo de la Roche and Mavis Gallant.

What happens, though, when that notional list of essential works, those of permanent value to a people or a country, is bankrupt? In Refuse: CanLit in Ruins, perhaps the most visible recent book in Canadian literary studies, Hannah McGregor, Julie Rak, and Erin Wunker contend that Canadian literature, “as part of a larger colonial project,” was “built on a foundation of injustices, including settler colonialism, anti-Blackness, and ableism.” If writing in Canada is stained by these and other original sins, then what good does a national canon do? 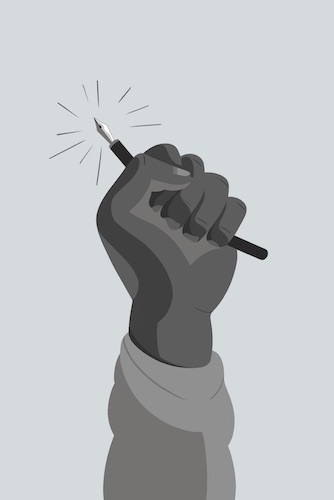 Anti-canonical at heart, Resisting Canada: An Anthology of Poetry is concerned less with literature’s ostensible timelessness than with its immediate social and political functions. Like all anthologies, it includes some works and, by definition, excludes others; the guiding principle of selection is poetry’s ability to resist Canada’s governing ideologies. The collection propounds an anti-Canadian literature, with Indigenous writers granted due prominence. In doing so, it and its editor, Nyla Matuk, make a significant and somewhat paradoxical contribution. The anthology belongs axiomatically to the era of Truth and Reconciliation, yet it continually evokes the Canadian canon. An invaluable and provocative compilation of oppositional poems, Resisting Canada is haunted by the literary past that it seeks to jettison.

In her introduction, Matuk asserts that “to resist Canada is to first acknowledge that the Canadian state was, and is, a settler-colonial endeavour. It was created atop the territories whose caretakers were or are Indigenous Peoples, sovereign bodies who populated the land and cared for it before European colonizers arrived.” She notes further that colonization is “an ongoing set of practices negatively affecting human beings and the environment.” The anthology therefore aspires to “re-orient a settler society to bear witness to the standpoint of the colonized.” It gathers poems that “question the triumphalist, nation-building narratives typical of Canada’s historiography,” and although it includes authors from various cultural backgrounds, it forgoes the tendency to celebrate “a mosaic of ethnic or cultural ‘diversity’ as we might find under the Canadian liberal ‘multiculturalism’ label.”

Twenty-eight authors and nearly a hundred poems appear in Resisting Canada. Indigenous writers come first, from Jordan Abel to Leanne Betasamosake Simpson, and a second section contains writing by non-Indigenous poets, from James Arthur to Rita Wong. “I have placed the work of Indigenous Peoples at the beginning of the book,” Matuk explains, “not because I perceive them as a monologic entity, but because their voices are the most urgent, frequent, and rooted in resistance activities.”

Matuk is an accomplished poet herself, but Resisting Canada has little stylistic relation to her Sumptuary Laws, published in 2012, and Stranger, from 2016. In “Sumptuary Crossword Clues,” from Stranger, Matuk proposes “L’enfer c’est les autres” as a cryptic clue for “Tied to the railway tracks.” In her commentary on the poem, she glosses the connection between the two phrases. First, the French enfer embeds the word fer, meaning “steel,” and tracks are made of steel. Second, “what worse hell is there, besides people, than being tied to railway tracks?” Readers must recognize the line from Sartre’s Huis clos and follow the bilingual chain of associations.

Such poetic games are largely absent from Resisting Canada, although in her introduction to the anthology, Matuk writes intriguingly of the “latent politicized allegory” in Stranger — further evidence of the variety of poetic modes that can be brought together under the umbrella of “resistance poetry.” Linked primarily by theme, the selections in this book occupy a range of forms and registers. Matuk observes that “at times, their beauty turns more to narrative truth than anything that is sensually pleasing or using metaphors, alliteration, rhyme.” If beauty resides primarily in “narrative truth,” then evaluation of the poetry in familiar terms is precluded. In fact, the anthology suggests that conventional aesthetic criteria — whatever lingers, for example, of New Critical or postmodernist orthodoxies — are inadequate here, even if certain poems would not be out of place in one Norton Anthology or another. What matters is political orientation, or more precisely the capacity to “re-orient a settler society.” The shift away from art for art’s sake serves to condemn political quietude in literature and its criticism. But a question does arise: What is poetry’s distinctive contribution to the project of resistance?

“How can a nation be resisted when its cultural apparatus tolerates protest?”

Another question is prompted by a note that dutifully acknowledges the support of the Canada Council for the Arts and the Department of Canadian Heritage. Poetry in Canada, like other genres with little commercial potential, virtually requires assistance from the state. How can a nation be resisted when its cultural apparatus tolerates protest? Indeed, many authors in Resisting Canada have been acknowledged by CanLit’s most august institutions. Billy-Ray Belcourt, Louise Bernice Halfe–Sky Dancer, Sachiko Murakami, and Armand Garnet Ruffo, for instance, have been finalists for the Governor General’s Literary Award, which Arleen Paré has won. Resisting Canada includes an excerpt of Jordan Abel’s Injun, which won the Griffin Poetry Prize in 2017, as well as three poems from Belcourt’s This Wound Is a World, which won the following year. Karen Solie won the Griffin in 2010 for Pigeon, having already been a finalist in 2002 with Short Haul Engine.

Deserving of praise as these poets are, it is striking that purportedly dissident writing is subsumed so readily into the literary firmament; one may become cynical about CanLit’s tendency to brook some measure of dissent. Solie, moreover, is as big a deal as it gets in Canadian poetry. Writing about Solie in the London Review of Books, Michael Hofmann dubbed her “the one by whom the [English] language lives.” More recently, in The New York Review of Books, Ange Mlinko compared her poetry to that of Moore, Bishop, Ashbery, and Heaney. If Solie is resisting Canada, she is being lauded for it.

The textbook I use to teach Canadian poetry is snow white — both because it reflects the demography of literary Canada at a particular historical juncture and because it adheres to an established view of the canon. I will happily teach Resisting Canada alongside that book. Of course, it would be more radical to abandon the textbook altogether. Do students today need to know the works of E. J. Pratt and A. J. M. Smith? Not necessarily. Will they learn as much, or more, by reading Wayde Compton and Marilyn Dumont? Probably. But focusing on contemporary resistance poetry risks overlooking how poets have long resisted Canada, even if the terms of their objection are not identical to ours.

Scholars and teachers of Canadian literature have been resisting Canada for decades. Today, a university literature course that celebrates the country is rare to the point of non-existence. If at one time Duncan Campbell Scott’s poetry was considered distinct from his bureaucratic career, now it is impossible to imagine teaching his poems without foregrounding his responsibility for the system of residential schools. Students are quick to see that “The Onondaga Madonna” is racist, and so Ruffo’s chilling “Poem for Duncan Campbell Scott” (included in Resisting Canada) is perhaps less a reorientation of current perspectives than an affirmation of them.

Other poems in Resisting Canada are likewise tied to the canon. Dumont’s “Letter to Sir John A. Macdonald” includes lines from F. R. Scott’s “Laurentian Shield,” a staple of CanLit classrooms. Jim Johnstone’s “Speaking Distance” involves “the sculpture of Al Purdy” in Queen’s Park, in Toronto. Michael Prior’s “Tashme,” meanwhile, refers to the communities of Osoyoos and Tulameen, and to the Similkameen River, all of which are invoked in “Say the Names,” one of Purdy’s late poems. Connections like these are gifts to teachers, who can encourage students to ponder adaptation and revision, and to assess differing political stances. Such exercises can also defang the element of protest in political poetry: we compare, contrast, and move on. Not unlike the Canadian state, Canadian literature as an academic field has been cunningly successful at absorbing historical injustices into the disciplinary narrative. “Tashme” and other poems in Resisting Canada would fit neatly in traditional anthologies; they are amphibians, at home both in the dirty waters of CanLit and on the dry land of resistance.

These tensions suggest the idealistic nature of the book. Resistance may be imagined through poetry, but poetry itself resists being reduced to a political program. Matuk writes that these poems “often express a highly collective, public, political struggle. But such a focus doesn’t necessarily prevent a politics of resistance driven by one’s subjective experience as a witness, agent, victim, or dreamer.” The subjective experiences of author and reader are essential to the power of poetry, which although real cannot be counted upon to make much of anything happen — at least not in a predictable, measurable fashion. One doesn’t have to dwell in a Bloomian cloud-cuckoo-land to observe that literature’s effects on the world are haphazard. Whether for or against the state, canonical or resistant, good poems make bad propaganda. Give the land back and start again? Yes. But it will take more than poetry alone to get it done.

Nicholas Bradley teaches English literature at the University of Victoria. His most recent collection of poetry is Rain Shadow.