The Problem with Everything: My Journey through the New Culture Wars

In 1993, when I was twenty-one, several of my friends and I appeared on the front page of the arts and life section of the Winnipeg Free Press. Wearing our army boots and band T‑shirts, we were illustrating a story on Generation X, the cohort born between roughly 1965 and 1980. The lighthearted piece, a primer of sorts for older readers on this newly named generation, depicted our supposed cynicism and disaffection with almost everything but irony. At the time, there was a lot of talk about my generation, the successors to the baby boomers. Demographers had named us after a Douglas Coupland novel, and Hollywood movies such as Singles and Reality Bites documented our many quirks and foibles.

We’ve since fallen off the demographic radar. Two years ago, Forbes called Xers the “forgotten generation,” in an article about targeted marketing; numerous newspaper and magazine pieces about home ownership, job security, and other metrics of success have skipped us entirely — charting only baby boomers, millennials, and Generation Z in their bar graphs. You might think this lack of attention upsets us, but we’re a notoriously apathetic group, the living equivalent of the “shrug” emoticon.

Although generalizing about generations can reduce a wildly diverse population to a collection of simplistic memes, Gen X has a particular perspective that’s often not part of the conversation. Say “Okay, boomer” to one of us, and we might bristle. But we might not be suited up for the social justice wars, either. 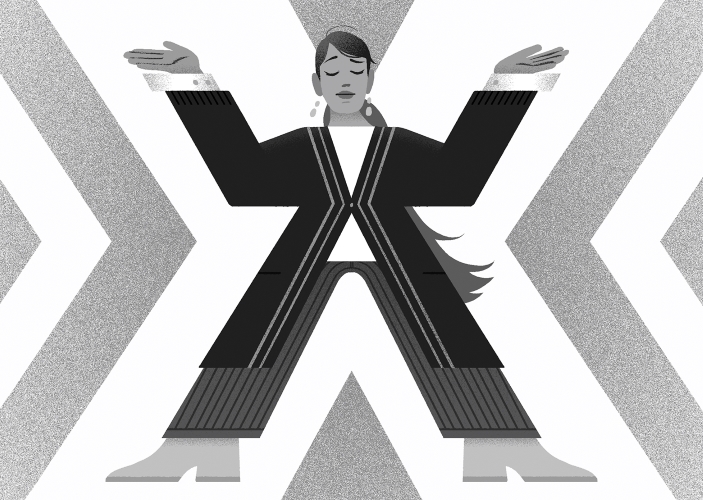 The shrug emoticon come to life.
Image by Mariah Llanes

Meghan Daum’s canny, intelligent, and often infuriating new book, The Problem with Everything, plugs into my generation’s idiosyncrasies as they pertain to today’s cultural climate: our antipathy toward one‑note, knee-jerk reactions to controversy and the hot takes in which talk-to-the-hand memes stand in for research or actual facts. (Put it this way: when the living, breathing shrug emoticon is motivated enough to wade into an argument, it doesn’t want to be reflexively shut down by the eye‑roll emoji.)

Born in 1970, Daum falls squarely between the perceived “Get off my lawn” fist shaking of the boomers and the perpetual outrage and high dudgeon of the millennials. Fellow Generation X readers may feel an uneasy but undeniable kinship with her as she elaborates on notions that many staunch liberals and ­feminists in their late forties and early fifties likely share but rarely express publicly, understanding that to do so would be as deadly to their “woke” reputations as unironically referring to themselves as “woke.”

Daum, author of five works of non-fiction and a long-time columnist for the Los Angeles Times, describes her collection of essays as part memoir, part manifesto. And, she says, its direction changed in the wake of Donald Trump’s election in 2016. Back then, many framed “Trumpism as a moral emergency that required an all-hands-on-deck, no-deviation-from-the-narrative approach to cultural and political thought.” But, however calamitous the Trump presidency has been, Daum fears “the left has cleared the way for a kind of purity policing — enforced and amplified by social media — that is sure to backfire somehow or other.”

Daum shrewdly lards her argument with examples designed to get sympathetic readers on board. She singles out the censure heaped on the actor and comedian Aziz Ansari after a “very bad date.” Recall that in early 2018, a reporter at the erstwhile site Babe.net related the story of an anonymous source who accused Ansari of “failing to pick up on her ‘verbal and non-verbal cues’ during a sexual encounter.” Most women have been in similar situations, and most know the weird line we tread as innate people pleasers; even a move that’s well short of overt coercion can still feel like pressure. But the story’s poor reporting, its clickbait tone, and its general vagueness made it difficult to parse anyone’s motivations. The Ansari story was not a uniting #MeToo moment, yet the women who challenged it were vilified as traitors to the cause.

That ease with which the mob excoriates the freethinking individual is a theme that runs throughout the book. Many Xers share a certain priggishness, a feeling that propriety has declined, to society’s detriment, but we recognize that saying so out loud makes us look fusty and old-fashioned. “Amen, sister,” I whispered as Daum recounted the 2017 scandal involving two teenagers who were told they couldn’t board a United Airlines flight while outfitted in leggings. The internet erupted with sartorial outrage, while Daum felt “peevish about overly casual dress on airplanes.”

From the start, the #LeggingsGate pile‑on bugged me as much as it did Daum. And then it turned out the girls were travelling on employee guest passes — passes that require their users (men and women alike) to adhere to a dress code. But the flurry of tweeters who condemned the airline for body shaming weren’t interested in the backstory or explanations.

For every relatable argument Daum offers, she has another that doesn’t quite land. At the outset, she acknowledges her privilege — white, cisgender, able-bodied — but she consistently analyzes situations based on her own experiences, and the analyses often fail to take that privilege into account. At one point, she asks if, given the strictures against punching down, “those of us perceived to be on the highest rungs are left just waving our fists in the air, with nothing to punch.” Isn’t that the dream? To be so — well, unaggrieved?

Daum admits that when it comes to complaints about male privilege, she tends to hold herself accountable: “It’s almost as if blaming myself strips the men of their power by rendering them too insignificant to even gripe about.” (Nice trick if you can manage it.) She’s also disdainful of swaggering “badass” feminism, with its pussy hats and no fucks to give, which she feels is a largely performative trend. I don’t disagree, but it’s hard to square her attitude with the fact that she portrays herself as a tough nut, unbothered by the bullying bosses and light misogyny she considers just part of life in the big city. If she’s not bothered, why are you?

“For every relatable argument Daum offers, she has another that doesn’t quite land.”

There’s some truth to Daum’s argument that giving outdated forms of misogyny any weight only serves to validate the idea that clueless men hold power over women. But this kind of “Suck it up, buttercup” attitude also calls to mind a recent viral tweet from the writer Daniel Swensen: “If you suffered in life and want other people to suffer as you did because ‘you turned out fine,’ you did not in fact turn out fine.”

In a chapter titled “You Are Lucky She’s Cool: Toughness, Toxicity, and the Fall of the Fall of Man,” Daum posits that “most women’s social and emotional manipulation skills are far more sophisticated than those of most men.” She then wonders if it isn’t “a little unfair that men are getting all the credit for being toxic.”

To answer her own question, Daum hypothetically polls female readers, asking them if they’ve ever engaged in manipulative behaviours, including acting badly and blaming it on their period; threatening to harm themselves if a man breaks up with them; being physically abusive to a man, knowing they are unlikely to face legal consequences; and faking a pregnancy scare to gauge a man’s reaction. Leaving aside the fact that Daum seems to be hanging around with some pretty awful women — and that this poll would work better if it weren’t hypothetical — it’s notable that all of her examples are domestic, not in the context of the workplace. Obviously, women can be exactly as terrible and manipulative as men, but even if they’re engaging in these behaviours en masse (and I’m not convinced that they are), the result isn’t the institutionalized suppression of men’s rights or their body autonomy. Daum is arguing a false equivalency — and she knows it.

Elsewhere, she laments the prevalence of the 900-word hot take or op‑ed, but even with many more words at her disposal, The Problem with Everything relies too much on anecdote, much of it singularly personal. Daum tells the story of a friend who, while working on Wall Street twenty years ago, arrived at the office one morning to find her workstation covered with ejaculate. Decades after the fact, the friend speaks of the perpetrator “almost with an air of pity.” And Daum tries to make another point: “Not once did she say she felt unsafe.” Is the reader really supposed to take this woman’s equanimity in hindsight as a recommendation to “just switch chairs and move on,” as the book suggests?

Sometimes, however, Daum’s personal approach is what saves the collection from sounding like a screed. Her point of view is not intended to stand in for all of Generation X: She admits to taking pride in being thick-skinned. She also admits, in the wake of her divorce, to feeling old, irrelevant, and left behind.

When Daum rails against a political or cultural left that has abandoned nuance or debate, it seems as if she’s forgotten that an inchoate anger against the system is part and parcel of being a young feminist. When I look back on the twenty-one-year-old in that Winnipeg Free Press photograph, I see a girl with a “No Means No” sticker on her binder and a renewed knowledge, thanks to the École Polytechnique massacre, that there were men out there who wished her ill. What that young me didn’t have was a way to let the world know about it, 280 characters at a time.

It’s Daum’s immersion in the scurrilous stew of Twitter and YouTube that’s fuelling her outrage; The Problem with Everything is actually about the problem with social media, what Daum calls the propagation of “undeveloped versions of already undeveloped thoughts.” As a fellow media worker, for whom Twitter is a necessary evil, I understand the feeling that the world lacks anyone with an appreciation for life’s grey areas. But I also know this frustration is easily assuaged by pulling away for a while.

Most of my friends in that Free Press photo have followed the vaguely anti-establishment path predicted for our generation: They don’t wear suits to work, they’re mostly unmarried and childless, they don’t seem driven by the need for wealth. They’re also, largely, offline — other than for occasional forays onto Facebook or Instagram. Daum’s arguments might engage (and possibly enrage) them, but they’re unlikely to hop online to air their views. They’d probably prefer to just shrug it all off.

Jill Wilson is a copy editor and arts reporter for the Winnipeg Free Press.