Strangers in the House: A Prairie Story of Bigotry and Belonging

When is a house not just a house? As a literary device, the house is often employed as an engine to drive a narrative or to generate a larger story outside its walls. Novels such as Laura Ingalls Wilder’s Little House on the Prairie and Charles Dickens’s Bleak House, as well as memoirs like Plum Johnson’s They Left Us Everything and Michael Pollan’s A Place of My Own, use houses to carry personal stories and recollections. Candace Savage, however, has a more ambitious aim. In Strangers in the House, where she writes about the place in Saskatoon that she has called home for thirty years, she admits the personal only for its warming glow.

Savage’s primary interest is not in her own story or even the structure she inhabits, but in Napoléon Sureau dit Blondin, the man who built it in 1928. She uses her house as a key to open doors that lead to eventual contact with his descendants — but even that’s not enough. She wants more, as her investigative imagination is caught by the oddity of sharing a home with a historic French Canadian family, who lived in an old British neighbourhood at a time when, thanks to the South Saskatchewan River, Saskatoon was even more clearly divided than it is now between English and the Other. Through painstaking research, Savage creates a chronicle larger and deeper than a story of specific individuals; as she traces the family’s movements across decades, she discovers government regulations and political documents that distress and alarm her. In this way, her house helps her better comprehend the ugly truths that are part of Saskatchewan — and thus Canadian — history.

As the book’s subtitle, A Prairie Story of Bigotry and Belonging, suggests, the curse that darkens our nation’s past is intolerance and discrimination. By following the fortunes of a single family, Savage shows how prejudice shaped and distorted their lives for several generations. Early settlers (French and English, Catholic and Protestant) arrived in Canada with distrust and hatred tightly woven into their perceptions and responses, bringing along their old feuds and clannish affiliations. They’d come, after all, from Europe, where the wars of religion had been waged, off and on, for centuries. Survivors, even those embarking for a new life in a new land, seldom held a neutral position. 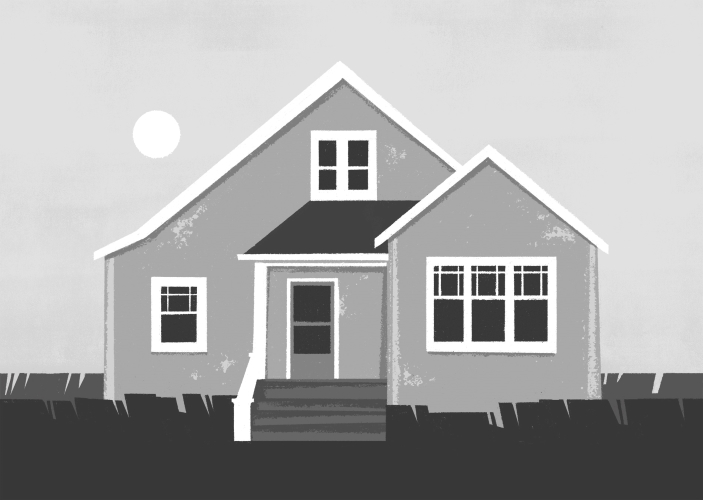 The revealing history of a single house.
Image by Christy Lundy

It’s a fact of life that we continue to witness in contemporary political struggles: whichever side holds power maintains it by pushing down the other. The Royal Proclamation of 1763 was the nail in the coffin for French control in Quebec; Savage shows how, from then on, the English continued to run the show by disempowering their former adversaries at every turn. Whether it was land or language, across the country from the St. Lawrence to the South Saskatchewan, federal, provincial, and local administrations always favoured the English.

Strangers in the House offers a multi-faceted family portrait that starts with the progenitor Hilaire Sureau, who was born near Poitiers, France, in 1650 and made his journey across the Atlantic in 1683. Thanks to the Research Program in Historical Demography at the Université de Montréal, with its registry of Québécois de souche (original families in French Canada from 1600 onward), Savage tracks her house builder Napoléon’s ancestors and acquires sufficient information to lead us on an oddly thrilling chase through Canadian history — from Sainte-Polycarpe in Quebec to Penetanguishene in Ontario, and onward to the western provinces.

I found myself reading into the night, as if this book were a mystery thriller. On the very first page, as Savage describes her arrival in Saskatoon after five years in Yellowknife, I knew myself to be in the presence of glorious prose: “My young daughter and I were lucky enough to arrive here in springtime, on a big, blue, blustery day when the trees were juicy with new-leaf green. I can still remember the sappy joy we felt the first time we walked down our street.” Yes, I thought, I’ll follow wherever you lead me.

With considerable skill, Savage takes us into the history books we think we know and the archives we’ve yet to explore. “Genealogical research is addictive,” she tells us. “Every discovery, no matter how insignificant, induces a pleasure rush.” She turns that research into lively and engaging prose; she transmits her delight at uncovering data so enthusiastically that readers feel part of the enterprise. We learn, for example, that among early settlers, “dit Blondin” was added to surnames to indicate that the bearer was a blond guy whom women found attractive. (For centuries now, many families have carried forward a designation meant only for that initial handsome fellow.) With the light touch of a journalist, Savage offers authentic details — including the weather — that give settings, situations, and characters alike credibility and texture. And with the sure hand of a novelist, she suggests how this person might have felt or what that one might have thought.

While full of compelling individuals, Strangers in the House is really about a fledgling nation in turmoil. As we well know, that turmoil continues, taking different forms in different parts of Canada. But Savage helps us understand the present discontent in new ways. I suspect I won’t be the only reader to raise my eyes to exclaim, “Good heavens, I didn’t know that!” My Ontario education presented some of the worst offenders, in terms of racial and religious bigotry, as national heroes. Savage reminds us how John A. Macdonald “staked his political future on filling the prairies” with “an energetic and civilised race” (for which we now read “white” and “Protestant”). But she admits that until she began her search for the house builder’s antecedents, she too was ignorant of the inequalities and injustices that are as much a part of our country’s fabric as the good and admirable.

In recounting the westward migration of settlers, in the late nineteenth and early twentieth centuries, Savage conveys their feverish hopes for a better future. Travelling by oxcart, wagon, and train, families uprooted themselves without any clear idea of where they were going. All that mattered was the promise of cheap, supposedly empty land ahead. In those days, if you were French in Ontario, it was understood you were papist — even if you became a freethinker, as did Napoléon’s father, Cléophas. Perhaps he thought to give his family a fresh start, free of religious prejudice, when he decided in 1904 to leave the southern shores of Georgian Bay and set out with his young second wife and several of his grown sons. Although most settlers on the prairies huddled together in arrangements based on language or religion, Cléophas chose to make his homestead away from other French newcomers. His was a determined independent spirit, ready to subject his family to a pretty tough existence in order to be free of constraint. In this, he was similar to thousands of other men rushing west full of dreams.

Eventually Cléophas and his sons began to prosper, but there were still obstacles they could not surmount. Chief among them were Protestant Orangemen, named for King William of Orange, who’d beaten the Irish Catholics at the Battle of the Boyne in 1690. There’d been lots of Orangemen back in Ontario, too, but here on the prairies, Loyal Orange Lodges had sprouted, blossomed, and multiplied so quickly that, in every segment of Saskatchewan’s public life, it seemed they, along with the provincial Conservative Party, were in the driver’s seat. The most terrifying aspect of their warped and narrow view of religion and race was that their extreme beliefs encouraged others of like stripe, including the Ku Klux Klan, who came up from the United States in the 1920s and caused havoc for a few fearful years. Although KKK provincial membership grew quickly to 25,000, and although a local Klan sprang up after the American contingent had slunk back over the border, its members eventually merged with the Conservative ranks. There the Klan’s attitudes continued to influence provincial policies, including the harsh treatment of French settlers: schoolchildren were denied their language and forced to speak English. Other severe policies were already in place, targeting the Métis and First Nations.

Savage exposes many cruel injustices with her record of prairie bigotry. She explains the wrongs that occurred within the context of their time and place, but she also produces a bracing reminder that Canada’s history is not as cheerfully multicultural as we like to imagine:

We live in a house of stories bequeathed to us by the past. It’s no mansion filled with wonders; in fact, it is a fixer-upper, in need of loving care. When we find cracks in the foundations and rot in the woodwork, then it’s good to face up to the defects and bring them out into the light. And it’s good, so good, to sit with one another and share our experiences. Stories are living things. They transcend boundaries and divisions; they seek out common ground. There is room in our house of stories for everyone.

Acknowledging those cracks in the foundations can be rather painful. It can also be something of an awakening. By the end of this well-researched and highly readable book — with its meticulous notes and an astonishingly detailed bibliography — one realizes that we do, in fact, live in an old rickety house that needs some cleaning, some repairs, and perhaps some serious renovation. But it is, after all, ours.

Isabel Huggan is an award-winning writer, now based in Orillia, Ontario.