What do the Old Spaghetti Factory, in downtown Toronto, Fallsview Casino Resort, in Niagara Falls, and St. Mary Immaculate Church, in Richmond Hill, have in common? All three feature stained glass artworks created by one studio, Josef Aigner’s Artistic Glass.

“Stained glass is one of the only art forms that relies entirely on light,” Cloe Joël Aigner, Josef’s daughter, writes in Artistic Glass, “particularly the infinitely changing presence of natural light, without which the expressions of stained glass art would not be manifested.” And with this full-colour, large-format homage, she sheds light on her seventy-five-year-old father’s impact on an art form that many have downplayed as nothing more than a craft. The imagery — wide shots of church windows, close crops of individual pieces, as well as glimpses of artisans inside the studio — on its own attests to the beauty and creativity of his work.

Over the last fifty years, Artistic Glass has created magnificent installations for over 265 Canadian churches, as well as in innumerable secular establishments. It started in 1968, when Aigner left Germany and arrived in Ontario, where he got a job with Toronto Glass Craftsman and started taking English classes at George Brown College. At the same time, “he was given access to the garage in the back of his apartment and used the space as a studio where he began creating his own collection of work.” He founded Artistic Glass the following year, in 1969. Before coming to Canada, Aigner had attended the Luisen School of Art, in Munich, and apprenticed with several of Europe’s renowned master stained glass artists, working on windows at the Louvre, Versailles, and Notre Dame. He also spent time in Amsterdam, where “he did extensive work on the beautiful and historical Town Hall, built in 1655.” In 1976, he travelled back to Germany to take his master’s degree in stained glass at the Meisterschule, in Hadamar. 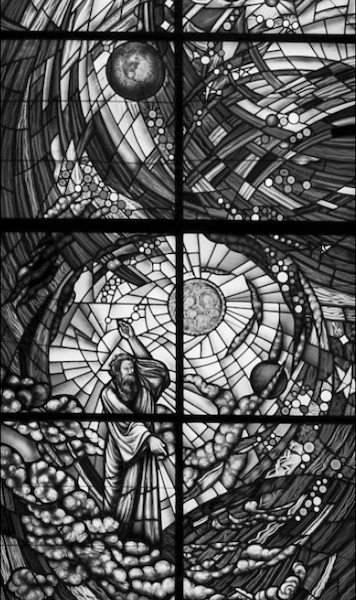 An intricate window into an ancient craft.
Image by Cloe Joël Aigner and ECW Press

Little has really changed in the thousand-year history of stained glass. Each piece of glass is still separately cut, whether by hand or machine. Aigner’s studio, on Dundas Street West in Roncesvalles Village, continues the practice of many European medieval methods but combines them with cutting-edge (forgive the pun) technologies, such as silicon adhesives, epoxy resins, full-size sandblasting stations, and huge kilns. The studio has “pushed the boundaries of possibility” through experimentation and by paying attention to trends. Today’s artist has another advantage over his or her medieval predecessor: lead-free materials that eliminate the occupational hazard of lead poisoning.

Stained glass likely originated in the Middle East, and it is thought that the Crusaders brought the art form back to Europe. “Byzantine and Romanesque art and architecture were the major influences that defined early Christian themes and aesthetics in medieval stained glass,” writes Cloe Joël Aigner. These themes continued into the Renaissance, when stained glass began to reflect increased secularization: “Donors were featured in the scenes of church windows depict­­ed in period clothing — and the same size as biblical figures.” Aesthetics continued to evolve through the baroque, Victorian, art deco, and art nouveau periods, into postmodernism and abstract, folk, and avant-garde styles.

Artistic Glass begins with the process of producing a modern stained glass window: from the design and illustration to the choice of materials, from drawing the patterns to cutting the glass, from colour treatments to staining and firing the pieces. “Once painted and put in the kiln, the grisaille fuses with the glass through the heating process, and while it can fade, the lifetime is well over 500 years.” The ultimate step is glazing — or leading — all the pieces together, and then using a liquid cement to ensure that a window is secure and weatherproof.

The second section of the book focuses on religious-themed stained glass. Aigner and his designers have worked on windows for all Christian denominations, along with Jewish, Buddhist, and Sikh places of worship, among others. Many churches continue the tradition of Biblical imagery, but, like Renaissance artisans who depicted donors, Aigner produces works that reflect their time and place. A panel in the Martyrs’ Shrine, in Midland, Ontario, for example, documents the relationship between the seventeenth-century Jesuit missionary Jean de Brébeuf and Joseph Chiwatenhwa of the Huron-Wendat First Nation, to tell a distinctive Canadian tale. The Old Spaghetti Factory also wanted to continue the Biblical tradition, albeit playfully, when it repurposed an old scene of shepherds and their flock — with the faces of Toronto Blue Jays. Even the sheep sport likenesses of the 1993 World Series champions.

The third part of Artistic Glass deals with decorative, mainly secular works found in places like hospitals, universities, and private residences, many of them in Toronto. In fact, the city “has been said to have more homes with stained glass and leaded clear glass in their windows than any other city in North America,” Aigner writes. “Most of these homes were built between 1880 and 1920, coinciding with Victorian, Arts and Crafts, art nouveau, and art deco movements.” Wealthy Torontonians would indicate their refinement and social status through their choice of windows. Just take a drive around the Rosedale neighbourhood to see the evidence.

Buried in Artistic Glass is a reference to Canada Stained Glass Works, another Toronto firm, established in 1856 by Joseph McCausland, an Irish immigrant. Now known as Robert McCausland Limited and based in Etobicoke, it claims to have the longest continuous history of any stained glass company in North America. Many other enterprises failed to survive the world wars and the Great Depression. But in the 1960s, the North American craft renaissance (remember macramé plant hangers?) led to a resurgence in stained glass. Hobbyists looked to established firms for supplies and opened workshops in many major cities: “A whole new generation of craftspeople entered the industry, applying traditional techniques with the latest technological innovations.”

Occasionally, Artistic Glass reads as marketing material for Aigner’s studio, but it nonetheless presents the considerable achievements of a master artisan. In these pages, we find literal windows into an age‑old art form.