Tender to the World: Jean Vanier, L’Arche, and the United Church of Canada

The timing was not propitious; in fact, it was catastrophic. Releasing a book on Jean Vanier just before demoralizing revelations came out — that the man many took to be a living saint was in fact far from it — does not make for good marketing. But that is neither the author’s nor the publisher’s fault. It was a trick of the gods.

And speaking of gods — or at least those who are perceived as closer to the Divinity because of the holiness of their lives — Jean Vanier was in a beatific galaxy of his own, as this book categorically demonstrates. He was internationally renowned for his humanitarian work as the founder of the L’Arche homes that span the globe — sanctuaries where intellectually disabled people and their diverse gifts can flourish. He was also celebrated as a peace activist, a campaigner for intercultural and interreligious harmony, a prolific author, and a winner of countless prestigious honours, including the Templeton Prize and appointment as a Companion of the Order of Canada. Courted by politicians of every stripe, pontiffs of both conservative and liberal persuasions, and princes royal, Vanier was a genuine Canadian celebrity before his death in 2019 and for a short time after.

And then came the disclosures, in a report by L’Arche International, that established on the basis of cumulative probabilities that Vanier, much like his “spiritual father,” the previously disgraced Dominican friar Thomas Philippe, used his spiritual charisma to manipulate six women into having sexual relations with him. For a man who had spent his life decrying exploitation of the vulnerable and who sought to correct the power imbalances that diminish the broken and exalt the privileged, this stark instance of hypocrisy precipitated a media whirlwind. The consequences are still playing out — nationally and internationally, ecclesiastically and politically. 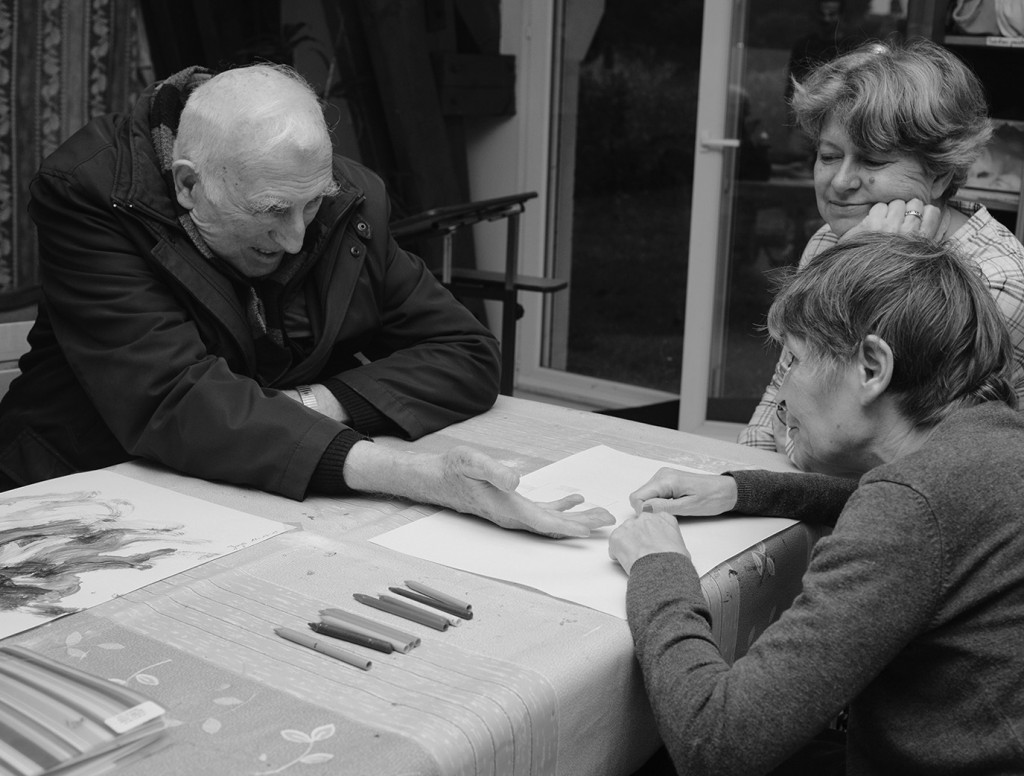 A spiritual man, though far from a living saint.
Image by Alex Cretey Systermans

The English Renaissance scholar and former L’Arche assistant Carolyn Whitney-Brown was unaware of Vanier’s sexual history when she wrote Tender to the World, and were she to undertake such a project with this new knowledge, it would certainly produce a very different book — but not entirely. After all, although Vanier’s vision, his intellectual and spiritual ministry, and his commanding presence and “holy” persona have all been compromised — although the multitudes have realized he was quite other than the saint they took him to be — much of his work cannot, must not be invalidated.

Although Whitney-Brown’s book is not a bio­graphy, Vanier’s life is key to its argument. She can take some consolation from the English writer Julian Barnes’s observation, in The Man in the Red Coat, about the French surgeon and pioneering gynecologist Samuel Jean Pozzi, that “biography is a collection of holes tied together with string, and nowhere more so than with the sexual and amatory life.” If Vanier’s ethically marred behaviour was a secret, so was a good deal of the rest of his life. Vanier’s Our Life Together: A Memoir in Letters, from 2007, is a masterpiece of evasion. A compilation of circulars that opted for the oracular and inspirational over the personal, it represents the genre Vanier was most comfortable with: the homiletic, peppered with the well-chiselled anecdote and dramatic snippets of spiritual heroism that he discovered in the L’Arche communities.

And so Whitney-Brown must rely upon the personal impact her subject made on others, his signature effect on their professional and prayer lives, his unmatched ability to inspire. In addition, there are her own personal encounters with Vanier, his bountiful publications and video presentations, and his legendary public lectures delivered to large crowds in a sotto voce and self-effacing manner. Electrifying drama.

It is a creative methodology, and Whitney-Brown shows a deft hand in managing it.

Where she quotes Vanier on weakness and compassion, the scandal adds a crushing irony that underscores the sense of betrayal that she and countless other L’Arche associates, scholars, and biographers share: “People who are powerless and vulnerable attract what is most beautiful and most luminous in those who are stronger.” Indeed.

Whitney-Brown’s study links Vanier to transformative changes in the leadership of United Church ministers and moderators. She meticulously examines key church documents that celebrate the gifts of disabled people and call for greater and more meaningful intercultural ministry at a time of institutional dissolution. But if Vanier is the cantus firmus of her work, it is in no way sundered by the man’s mystique. “The deepest gift of L’Arche for the United Church is not a set of ideas, practical tips, or philosophical insights,” she announces, quite rightly, early on, “but that L’Arche models a surprising way of being, inverting assumptions even about who is handicapped and where Jesus is embodied. For Vanier, these are not just ideas or tendencies, but experiences grounded in relationships.”

Whitney-Brown explores the United Church’s productive relationship to the Catholic thinker as a person — the encomia and rhapsodic homages border on sainthood by acclamation or canonization by vox populi — as well as through Vanier’s incarnated vision of a ministry to people with intellectual disabilities. She does this by combining scholarly and pastoral approaches, the former by deploying various disability and cultural theories and the latter through profile and storytelling. It is a creative methodology, and Whitney-Brown shows a deft hand in managing it.

The book quotes many theorists. Some are models of academic prose, while others show what happens when discourse is infected by what the philosophy professor and poet James M. Cameron, in On the Idea of a University, called “parasense.” Grammatically and syntactically correct prose can indeed generate intellectual fog or opacity, even as it has about it a patina of erudition. In sharp contrast to Whitney-Brown’s own style, an exemplar of intelligibility and lucidity, the leaden prose she sometimes quotes diminishes rather than enhances the force of her argument. This is not a major quibble, as many of the sources do add potency to the points she makes and underscore her wide familiarity with the current literature.

By identifying key concepts in cul­tural and disability theory — like agency, with its numerous iterations and deconstructions, inversion, and role reversal — Whitney-Brown solidifies her foundational pillars before she moves on to the more compelling and persuasive component of her book: storytelling. Cognizant of the story-creating capacity to be found in a L’Arche home and proficient in drawing on the insights of narratologists, she gives voice to the core members, their assistants, and other institutional leaders as she captures something of the joy and anguish, the constitutive dimensions of being human. In doing so, she reminds me of what the Nigerian novelist Ben Okri says in A Way of Being Free: “The fact of storytelling hints at a fundamental human unease, hints at human imperfections. Where there is perfection there is no story to tell.”

Donald Nicholl, an accomplished spiritual writer and one-time University of Santa Cruz professor, proposed that spirituality, like other subjects in the social sciences and humanities, can be approached in a scholarly and systematic way. Its modality is different, however, in that it must proceed by way of the heart and imagination, by way of storytelling and human narrative, by what he called the scientia cordis.

Complementing Whitney-Brown’s storytelling is the festive and the theatrical, that spirit that Mikhail Bakhtin called the “energy of carnival.” She is especially convincing when ­writing about this subversive dynamic, rooting it in the medieval and Renaissance worlds, showing its gift for turning things on their head, righting reality via the topsy-turvy. A perfect example of this mode of revolutionary fervour that presages the atmosphere, character, and vision of L’Arche is God’s tumbler, the jongleur de Dieu, whom G. K. Chesterton brilliantly highlights in his life of Saint Francis of Assisi. There is something that is quintessentially Franciscan about L’Arche homes, their carnivalesque freedom, their subversive exalting of the lowly and humbling of the mighty.

L’Arche and its denizens, visitors, supporters, and leaders are not exalted specimens. Its founder was flawed (more than he would have had us know), and its value as a movement is dependent on honest human transactions aching into wholeness and holiness. As Whitney-Brown notes in her preface, Vanier’s legacy is “not one story of saintly perfection, but instead can be found in thousands of stories around the world of people taking up his compelling vision to reconfigure structures of privilege and celebrate diverse communities across every kind of divide.”

Although Tender to the World is not a study in ecclesiology nor an exercise in church history, it does have a deeply church-flavoured subtext. The United Church of Canada built many new churches and achieved the zenith of its influence, attendance, memberships, and pastoral outreach in the mid-1960s and has been in steady, inexorable institutional decline ever since. In an effort driven by both inspiration and desperation, it has sought various life-giving strategies for revival, for making sense of a new ecclesia, or assembly of believers, attuned to its time. The model of spirituality exemplified by L’Arche fits perfectly. Doug Graves, a United minister frequently referenced by Whitney-­Brown, articulates the value of that model: “How do we live together in a way that isn’t one group swallowing the other, but actually living mutually and together, which is a huge thing for the United Church right now in trying to rethink ourselves.”

Michael W. Higgins is working on a book about Pope Francis.