The narrator of Back Roads is experiencing an existential crisis. So is the novel itself, Andrée A. Michaud’s eleventh. Originally published as Routes secondaires in 2017, it is part mystery, part exploration of its own creation. The writer protagonist’s identity is unclear, as is the question of whether the strange woman she encounters on a forest road is her double, or a ghost, or a figment of her imagination. “I must be called Heather. She must be called Heather.” These lines open the book, words that ring through the rest of the text, though they are occasionally distorted. “My name must be Andrée, Andrée A.,” she says later on, introducing a curious semi-­autobiographical element. This much we know: one woman was in a car accident, and another woman watched it happen. Or was that what actually happened? One of these women is Heather Waverley Thorne, and the other is Andrée A. Or maybe both are Heather, or both are Andrée. In the end, it’s hard to say.

What underlies the existential crisis is the event of the car crash, which defines the course of the novel and powers whatever identifiable plot there is. The narrator turns detective as she interviews the motley crew of local folk who populate the story, attempting to piece together what took place and solve the mystery of the identity of this other woman — who may or may not even exist. She camps out in front of people’s homes, questions them, and doesn’t tell her husband, P., what she’s doing. She doesn’t know exactly what she’s doing: she is simply following a compulsion, or an obsession.

The world here is dark. It feels as though it’s always night, that there’s about to be a storm, and that it’s either winter or nearly winter. “Have I really lived through two winters since I first wrote, ‘My name must be Heather,’ or did I merely imagine I’d lived them?” the narrator wonders. Michaud captures the vastness and isolation of Quebec’s boreal forest, as well as its timeless quality — the hope of spring forever in the distance, and the fleeting summer already tinged with the fear of “the fall and its fogs.” Her descriptions of the land, animals, and the weather are detailed and vivid. Her treatment of characters, on the other hand, keeps us at arm’s length: in cultivating a sense of uncertainty, she sacrifices any real connection to her protagonist. 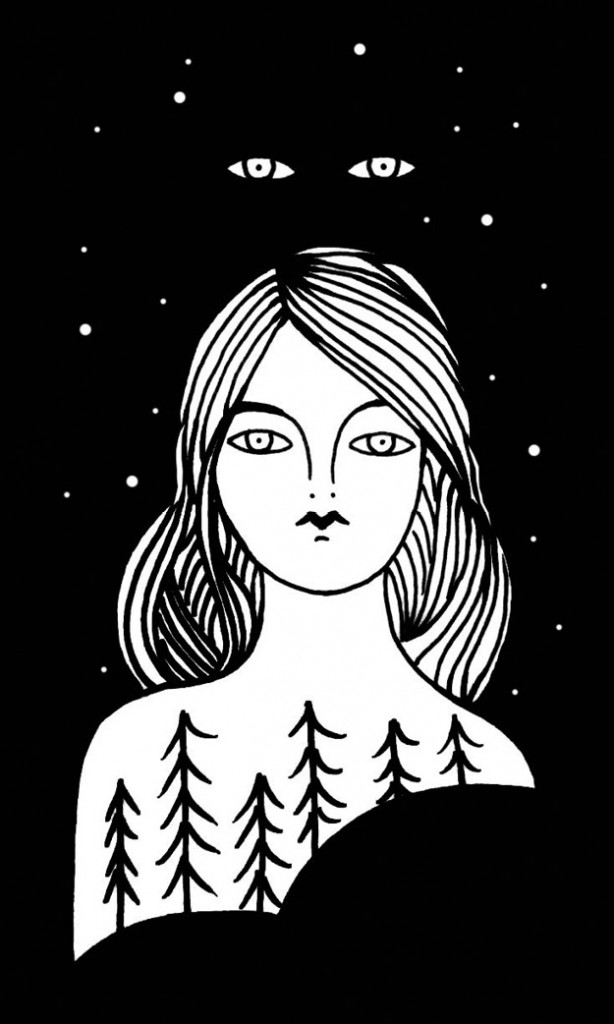 A crisis within the protagonist’s head.
Image by Lisa Vanin

The novel is more an interrogation of the mind of the writer at work than it is a character study. Michaud appears concerned with the power she has but also consumed by the debilitating doubt and confusion involved in the act of creating. A writer is able to give life; she questions what her responsibilities are to that life, and whether it is immoral to kill her creations. When an author invents a character, she asks, how much of a hand should she have in determining his or her fate?

Toward the beginning, the narrator states, “I write these sentences as a blizzard rages.” As the novel continues, she falls into many internal debates over whether she can determine the outcome of her story — and her life — or whether “it’s written.” The double meaning of “it’s written” in relation to both fate and free will is a driving force throughout the text, as Michaud constantly circles the question of who controls the narrative. Later, the laptop on which the narrator is writing her book is stolen. When it’s recovered, she clicks on the file named Back Roads and sees “all the corrections and additions I’ve made since the computer was stolen, all of them, including the pages of the last few weeks and the ones I’ve not yet written, but which are, I know, identical to the ones I shall write.” It is something of a non-­event when she discovers that “the novel is already there, complete, and can no longer be changed.”

For a writer, this kind of questioning and curiosity is vital; for a reader, it quickly becomes boring. Give us a plot, give us characters, give us detail. A self-­aware, metatextual approach can feel incredibly alive and compelling. But it can also undermine the nature of the work itself, tying the book in knots of introspection and becoming a barrier to the reader’s engagement with the characters and their story. Even when we know how the tricks are done, we still want to believe in the magic.

For much of the narrative, we are inside the protagonist’s head, following her as she goes about the mundanities of her life: drinking wine with her husband, fixing the fences of their property, examining the moths that fling themselves at the lamp on her writing desk. She is an isolated figure, both in her remote location and in how frequently she finds herself lost in the depths of imagination and memory. She has a loving husband but doesn’t spend much time with him, let alone confide in him. He is not even given a full name. She is forever searching for a kind of abstract meaning or an answer to the larger quandary, though this quest causes her to neglect the world in front of her.

It is not until later in the book that we finally gain more of an insight into the woman we think is Heather — the woman who was in the accident. We are trapped with her in her car, hoping for the best and fearing the worst, in the winter forest in the aftermath of the crash. It is here that Michaud’s writing and internalized structure are at their strongest, when we inhabit this character completely. These moments are quite wonderful, and they feel like at least part of an answer we’ve been waiting for.

Behind the exploration of writing, Back Roads is also about trauma and the way painful events have the ability to rewire the brain and rewrite the narrative. There is a hint at the end that the narrator has been trying to excavate the collective memories of this town, as well as her own, in order to find out the truth of what happened after the accident. With her, we are left wondering if these events were simply echoes, or ghosts, of an incident that occurred thirty years ago. The only thing we can say for certain is that it is impossible to know the full complexities of the past, especially one marked by tragedy.

Michaud’s writing captures the intangible, evanescent quality of life, of the seasons, of the limits of knowledge. The experience of reading Back Roads is circuitous, confusing, and at times very frustrating. Readers are kept in the dark, searching alongside the author and her characters for truth in an endlessly obscure narrative. But one person’s frustration may be another’s intrigue, and the novel will surely find readers who savour a haunting meditation on the process of literary creation.

Harriet Alida Lye is the author of Natural Killer: A Memoir.