On November 27, 1979, Robert Comeau was called upon for the second time to testify in public before the Keable Commission, the Quebec inquiry into police activities during and after the October Crisis. Previously, in four in‑camera hearings, he had denied any participation in the Front de Libération du Québec and had refused to speak publicly. He was nervous; another refusal could mean a sentence of up to two years for contempt of court.

Comeau, a history professor at the Université du Québec à Montréal, had in fact been a member of the FLQ, primarily delivering communiqués from the cells that had kidnapped James Cross and Pierre Laporte in October 1970. Before that, he was involved in a robbery of dynamite. Determined not to answer questions about his involvement, out of solidarity with his comrades, Comeau was stunned when Jean Keable announced at the last minute that the upcoming interrogation was cancelled: the commission had learned that François Séguin, Comeau’s closest friend, who had also been summoned to testify, was a police informant.

Comeau was shattered. “The revelation of the truth about François Séguin was the worst shock of my life,” he writes of the October Crisis. “It literally floored me; I had to be escorted from the commission’s hearing room. I was able to recover only after therapy that lasted two years.” The two had been friends and comrades since 1970, when they were both involved in the FLQ, and later when they joined En Lutte, the Maoist organization sarcastically called a groupuscule in French. Séguin had the key to Comeau’s apartment; he came and went as he pleased, often borrowing books. And he had been spying on the professor for almost a decade.

This fall is the fiftieth anniversary of the October Crisis, among the most dramatic examples of terrorism in modern Canadian history. Those few weeks in October have been the subject of commissions of inquiry, histories and novels, docudramas and documentaries. Memoirists have described the crisis, and biographies of Pierre Trudeau and other political actors have given it plenty of attention. Each subsequent decade has seen a fresh burst of retrospectives and reflections. The historian J. L. Granatstein, for example, publicly opposed the invocation of the War Measures Act at a York University rally, in 1970. “I have never before or since been afraid of a crowd, never feared being torn from limb to limb, but that day I was frightened,” he later recalled. “The shouts from the students that interrupted my speech were ­frequent and hostile.” By the 1990s, he had changed his position entirely. 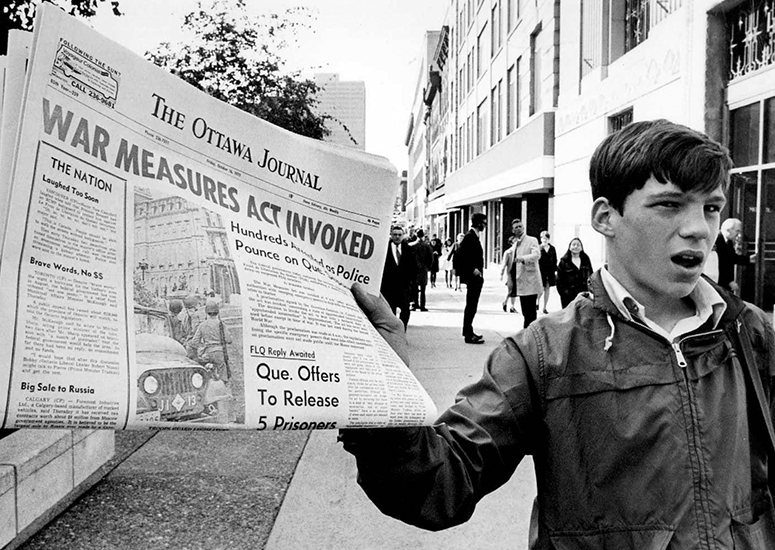 At the time, the prime minister justified the use of the act, which relaxed restrictions on the police and led to nearly 500 arrests, by suggesting there was a threat to overthrow the government. Peter C. Newman was sufficiently persuaded that he wrote a front-page story for the Toronto Star saying so. Later, convinced that he’d been manipulated by Trudeau and his senior advisers, Newman wrote in his 2004 memoir, Here Be Dragons, “I easily conclude that Trudeau invoked the War Measures Act as a partisan weapon to intimidate Quebec’s separatists for his own political purposes.”

Comeau was not a major actor in the FLQ or the October Crisis. In the 1994 National Film Board documentary La liberté en colère (available free online), he appears as an amiable minor figure in comparison with Pierre Vallières, Charles Gagnon, and Francis Simard. What clearly haunts Comeau is the fact that, of all those involved, he was virtually the only one to face no charges and to spend no time in prison. This has led a number of people to conclude that he was a police informer; the novelist Louis Hamelin, for one, explored this theory in the prizewinning La constellation du Lynx, from 2010, and more recently and more openly in Fabrications, a 2014 collection of essays.

“This fall is the fiftieth anniversary of the October Crisis, among the most dramatic examples of terrorism in modern Canadian history.”

On the contrary, Comeau argues. He wasn’t charged not because he was an informer himself, but because he was being spied upon by two others who were, Séguin and Carole de Vault. Bringing him to court would have put those sources at risk. In addition to challenging Hamelin’s conspiracy theory, Comeau also dismisses the idea that Vallières, the writer and intellectual heart of the FLQ, clung to: that Laporte was executed as part of a federal plan to discredit the organization and the separatist movement. No, the provincial cabinet minister was killed by Jacques Rose and Francis Simard after he tried to escape. While the details have never been revealed, all of the kidnappers — including Paul Rose, who was not present at the time — took responsibility.

A few months after Comeau’s traumatic experience at the Keable Commission, there was a party in Quebec City for reporters who were about to cover the 1980 referendum campaign. William Johnson, the Globe and Mail columnist, was there with a dark-haired, exotic woman who was introduced as Jeanne du Sablon. When asked what she did, she smiled coyly and said that she was a dentist.

Afterwards, one of those at the party said that whoever she was, she was no dentist: she had bad teeth. But the mystery did not last long. A few days later, the reporter Michel C. Auger was in a doctor’s waiting room when the receptionist called the next patient: Carole de Vault. It turned out she had met Johnson at the skating rink outside the Château Frontenac, where she was being kept incognito. They became romantically involved, and he later helped her write The Informer: Confessions of an Ex‑Terrorist.

It was de Vault, a twenty-five-year-old UQAM student in 1970, who had harassed Comeau to give her dynamite. In what he calls “an unfortunate attempt” to brush her aside, Comeau lied: “I invented a ‘leader of the FLQ,’ claiming that his directives were to not follow through with the operations she wanted to launch.” When they heard this, the police concluded that the leader must be Comeau’s friend and colleague Noël Vallerand, a historian who went on to become a senior deputy minister in the PQ government, but who had absolutely no connection with the FLQ.

Comeau vents his indignation at de Vault’s betrayal, and at Johnson’s participation in the writing of her 1982 book, which he argues is a tissue of lies. In it, de Vault claimed that Comeau recruited her into the FLQ; Comeau argues that she actually approached him, suggested a robbery at a company where she was working, constantly asked him for dynamite, and wanted him to relaunch the FLQ after he had dropped out in December 1970. According to Comeau, she repeated “a good number of these lies” in a television interview with Paul Arcand of TVA, in September 2017.

In November 2018, de Vault threatened to sue Comeau if he published Mon octobre 70, and her lawyer complained that Comeau “speaks often about her sexuality.” In her own book, she talked about her affair with Jacques Parizeau. Comeau adds only that he also spent a night with her and that she had an affair with a former bodyguard of the crime boss Donald Lavoie, about whom she co-wrote another book.

Comeau also writes about the still mysterious murder of Mario Bachand, a felquiste who was shot in Paris in 1971. Conflicting theories have suggested that Bachand’s killing was officially sanctioned by Ottawa or was an attempt by the FLQ to settle scores internally. While appearing to lean toward the second scenario, Comeau is indignant that no effort was made by federal or provincial authorities to pursue the investigation.

After the October Crisis and the Keable inquiry, Comeau continued his work as an academic, editing a series of publications, organizing conferences on political leaders in Quebec, and winning numerous promotions and awards. Tucked inside this concise account, intended to set the record straight, is the narrative of a man who made a convoluted journey from terrorism to Maoism to nationalism — and who eventually came out of the closet. Comeau concludes by writing that while he categorically condemns the acts of the FLQ, “as much for their inefficiency as for their murderous consequences,” he still does not question the goal of an independent Quebec.

A half century has passed since the traumatic events of October 1970, and it is time for a major history that pulls together all the strands: the terrorist cells of the FLQ, their infiltration by informers who were controlled by the police, the complex relations between Ottawa and Quebec City, and the scandalous behaviour by the RCMP — the break‑ins and barn burning. Although he is a historian, Comeau has not written that book. But this memoir adds fascinating details to a key event in Canadian history.