A Theatre for Dreamers

In The Colossus of Maroussi, Henry Miller calls Hydra “aesthetically perfect,” as if it had been designed to inspire artists like him. Generations of poets, painters, and artists of all stripes seem to agree, having gone to the car‑free Greek island to create, and to get in the way of sponge fishers for whom aesthetics are beside the point. Sophia Loren and Maria Callas often frequented it, while Lawrence Durrell lived among the ruins. So did Leonard Cohen. In September 1960, having just turned twenty-six, he bought a house with no electricity for $1,500 (U.S). “All through the day,” he wrote to his mother, “you hear the calls of the street vendors and they are really rather musical.”

Hydra has survived, in the post-sponge era, on the muse economy: feeding and watering foreign artists. The heyday was the late 1950s and early ’60s, when Cohen was there and met Marianne Ihlen, whom he would make famous in song (“Bird on the Wire” and, of course, “So Long, Marianne”). On Hydra, he hung out with the troubled writers Charmian Clift and George Johnston. This was before bohemian went mainstream, but just barely. It was bright sun, blue water, and retsina. It was young, attractive, and barefoot people spending trust funds while writing poetry, before going home to work in advertising. But there were exceptions: Cohen’s crowd, for the most part, were the real thing.

Polly Samson’s A Theatre for Dreamers is a novel of that moment. The English writer knows the place. She and her husband, David Gilmour, from the band Pink Floyd, have a house on the island. Her ease with location makes for vivid scenes, where octopuses are “strung like old tights along a boat rope at the jetty” and “marble slabs shine from centuries of use.” This is a coming-of-age story. Samson’s narrator is her stand‑in, Erica, an English teenager who arrives with a brother who wants to be a painter and with a boyfriend who wants to be a poet. Her mother has just died and left her some money. The trip is a quest, to find her mother’s friend Charmian, a writer who can help Erica better understand who she’s lost. 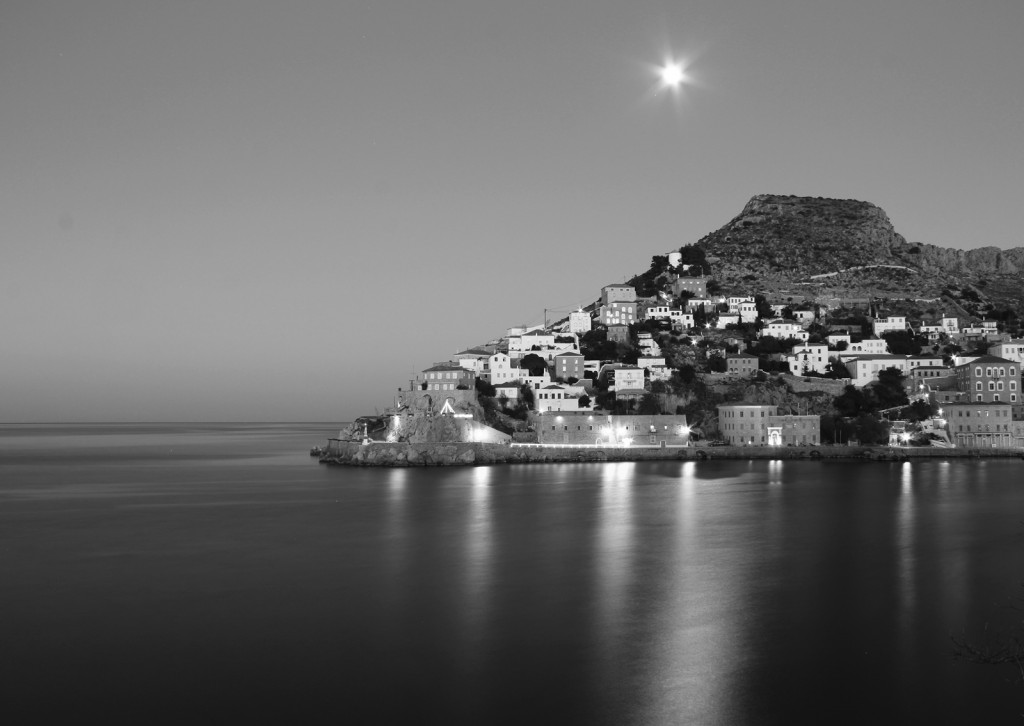 The rather musical island of Hydra.
Image by Richard Cotman; Flickr

The real Charmian Clift was married to the Australian journalist George Johnston. Their home on Hydra was a clearing house for young talent. Marianne Ihlen, for one, showed up with her husband, Axel Jensen, an abusive Norwegian man-baby who left Marianne for another woman, in plain sight. Leonard Cohen arrived the same year, carrying a typewriter and a guitar with a rope as a strap —“his charisma relentless,” in Samson’s portrait.

The novel is the fictionalized story of Erica and Charmian as her surrogate mother, set against the domestic drama of young artists wrestling “with the muses on their home turf.” This, after all, is the attraction of Greece: art starts here, and only a loser fails to be inspired. But the book digs deeper and asks, What are the human costs of art?

Early on, Marianne gifts Erica, her new friend, a heart-shaped rock that she has found. She calls it “a talisman” and adds with a giggle that “maybe it’s the petrified heart of Orpheus.” Samson calls on the Orphic myth more than once, to good effect. Remember, Orpheus is given a free pass to the underworld to retrieve Eurydice, his lost love. But the rules are clear: He can’t look at her. If he does, he loses her. Of course, he looks at her and is punished as promised.

For the philosopher Maurice Blanchot, that’s the story of art right there: Eurydice is what art can achieve, and Orpheus, the artist, has to travel to the darkest place to find it. In the end, if his approach is too direct, he loses it — the poem, the song, the painting. He can only ever hint at the truth, translate it obliquely, never actually touch it. In short, the story of Orpheus is about the impossibility of art and of being an artist, except for those who know not to look it in the eye.

Marianne’s faithless Axel Jensen fits the bill: barking mad and threatening suicide (“a bit Kerouac for my taste,” says the fictionalized Charmian). Then there’s Charmian’s George Johnston, a difficult man who needs care, feeding, and daily antibiotic injections. The male poets and painters on Hydra need their women to take care of the day-to-day details — the cooking of lamb and the laundering of sheets — while they work at their often violent visions. Charmian is only half joking when she refers to the women of Hydra as “ministering angels.” This is another of Samson’s recurring themes: the women who roll their eyes at the men who make noise and precious little else but are nonetheless their nursemaids. The exception is Cohen.

“When you want an unassailable good guy in your fiction, make him a Canadian artist.”

Cohen is a sensible, smarter Orpheus, with lyre strung over his shoulder on a rope. He knows the rules of the underworld: don’t look back at Eurydice, find your art not through hubris but by indirection. After all, he is Canadian. Tell a Canadian not to look at Eurydice, and he’s not going to look at Eurydice. “Our Canadian friend,” his island mates call him. Unlike the hedonists on Hydra, he spends his time at work, writing. We see him lowering his eyes through cigarette smoke in silent observation. He is a man of few words, and those he offers are Talmudic. “Leonard gives off an unmistakable air of a man who has always been there before you,” Samson’s narrator, Erica, tells us. “He possesses that old-soul thing of wisdom more ancient than his body and his face.” At one point, while discussing Sartre’s story “Intimacy,” Charmian quotes his line that “a woman doesn’t have a right to spoil her life for some impotent.” And for his part, the fictionalized Leonard Cohen doesn’t want to be that: “If there are things to fight against, let’s do it in health and in sanity. I don’t want to become a mad poet, I want to become a healthy man who can face the things that are around me.” Cohen is the good guy, if deliberately cryptic.

Of course, the Canadian ends up with the girl, Marianne, but that part is fated. “When there are meals on the table, order in the upkeep of the house and harmony, it’s the perfect moment to start some serious work,” he says to his friends over a fireside meal. “When there is food on the table, when the candles are lit, when you wash the dishes together, and put the child to bed together. That is order, that is spiritual order, there is no other.” With a fishing boat called The Twelve Apostles moored nearby, the scene is a kind of last supper, with L. C. as J. C. — maybe a bit heavy-handed, but the times call for it: the world is about to change.

When you want an unassailable good guy in your fiction, make him a Canadian artist. It’s what the Austrian writer Thomas Bernhard did with The Loser, his novel from 1983. The Loser is a feverish (it’s nearly a single paragraph) first-person rant about two men who study music under Vladimir Horowitz in the early 1950s, and whose fellow student is the pianist Glenn Gould, whom the narrator refers to as “our Canadian friend.” Let’s not ruin a darkly funny and unsettling tale with too much plot revelation, except to say that the two friends immediately give up the piano once they hear Gould play, so overwhelming is his talent. The Loser is a book about the broken promise of artistic ambition. Except for Gould, of course. “Year in, year out,” says Bernhard’s narrator, “he wore the same kind of pants, if not the same pants, his step was light, or as my father would have said, noble. He loved things with sharp contours, detested approximation.” Like the fictionalized Cohen, this version of Gould values spiritual order.

Bernhard, though, is caught up with the story of the losers: the narrator and his friend Wertheimer, the two who can’t match Gould’s talent and confidence. Gould just plays the piano, nothing to it. The notes fly off the oddly held fingers. It’s as if he’s untroubled by music, life, the mystery of art. (In real life, of course, Gould was troubled by everything, including the weather. But this is a novel.) For the other two, the piano is a hopeless battle. Wertheimer can’t take it. He kills himself.

Troubled, complex, and difficult characters — like Axel Jensen in A Theatre for Dreamers and Wertheimer of The Loser — are less perfectly dull, less Canadian than the holy man Leonard Cohen or the genius Glenn Gould. Perhaps the Canadian who appears in non-Canadian fiction has a purpose: to look smarter and more together than the mucked-up romantic hero, to fulfill some kind of global stereotype of sensibility and righteousness. That’s Cohen, that’s Gould, that’s Marshall McLuhan showing up to set everyone straight in Annie Hall, that’s even Dudley Do‑Right in the Bullwinkle cartoons — dim-witted but loyal and true to Nell and his country. Quiet Canadians, the world thinks, have it all figured out (don’t tell them the truth). And when we turn up in fiction, film, and pop culture, we are the most together and least interesting characters in the mix.