Whom Fortune Favours: The Bank of Montreal and the Rise of North American Finance

Imagine it’s revealed that your staid, quiet grandparents were once wild and crazy. It’s the kind of startling revelation you want to have about grey-haired banks when you open Laurence B. Mussio’s Whom Fortune Favours, a two-volume hist­ory of the Bank of Montreal. Once omnipresent in business and society, Canadian banks were far more distinct from one another than they are today. The outsize characters who ruled them were revered or reviled by the public and comparable only to government in their influence. Now banks seem to be bland corporate citizens that deliver commoditized products with very little to differentiate them. Not even vast amounts of branding and marketing — with what look like images of the same happy families and smiling faces — can lend banks individual personalities.

Established in 1817, the Bank of Montreal was Canada’s first financial institution. All these years later, it’s the forty-seventh-largest bank in the world, having been surpassed by three upstart compatriots: the Royal Bank of Canada (twenty-third), the Toronto-Dominion Bank (twenty-fifth), and the Bank of Nova Scotia (fortieth). In some respects, it’s remarkable that BMO has survived all this time. “In the North Atlantic world, the small number of private and corporate institutions that have persisted for two centuries form an elite club,” Mussio writes. “In Canada, very few companies can claim such a long pedigree: the Hudson’s Bay Company (founded in 1670) and Molson (1786) come to mind. Yet even these are now managed, or owned partially or wholly, from the United States.”

The early dominance of the Bank of Montreal is somewhat difficult to appreciate from today’s vantage point: “This is Canada’s first bank, its most influential bank, for a century or more the coordinator-in-chief of the Canadian chartered banks before the establishment of the Bank of Canada. The Bank of Montreal was the government’s banker, the financier of vital public infrastructure from the telegraph to the railroad to innumerable public-work projects.” The institution’s founding involved the most prominent businessmen of the era; its history is the hist­ory of nascent capitalism in North America, under the watchful eye of English colonialist overlords. Its history is the history of a nation. 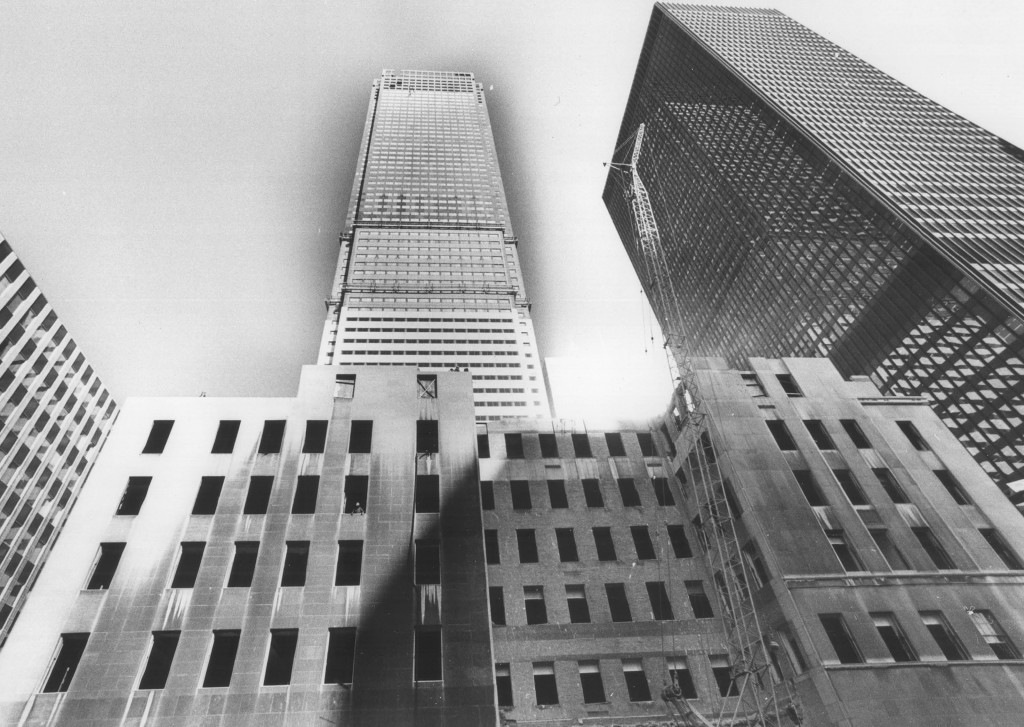 To study our banks is to study our nation.
Image by Graham Bezant, 1975; Toronto Star archives

Our banks have always had a greater impact on business and communities than their American counterparts. After all, it’s a consolidated industry with monopolistic sway. There are only a few major players here — the Big Six — and each has thousands of branches across the country. The United States, by contrast, has hundreds of local and regional banks, many with only a handful of branches, and the overwhelming majority are small compared with the Big Six; only a few are large enough to have national prominence. With good reason, Canadians long believed that banks ran the show, and conspiracy theorists still maintain they are in collusion with the government and the churches to control our lives. And however diminished they are in their obvious dominance or flamboyance, they still support everything from the local minor-league hockey team to major-league cultural and health institutions, so you simply can’t avoid the Big Six (even if you don’t bank with them).

Are our banks as competitive or innovative as their U.S. peers? While it depends on what measures are used, the judgment is usually “no, but”— and that “but” is crucial. Our financial system’s advantage is superior regulation. The government’s payback for allowing an oligarchy — and for permitting consolidation of brokerage, trust, insurance, and other services in a single institution — is the banks’ subservience to oversight and the expectation that they be model citizens, rather than risk takers aggressively pursuing growth à la Lehman Brothers.

Less competition and closer scrutiny meant that our banks did not recklessly grow their businesses, in the years leading up to the 2008 financial crisis, by giving out mortgages indiscriminately. The recession wasn’t restricted to the U.S., but Canadian banks (and Canadians) did weather it better. Will Canadian banking ever suffer major calamities? Will Ottawa ever need to bail out our proudly sound institutions? Mussio doesn’t engage the potential drama of such questions.

Whom Fortune Favours begins with a note to readers from Darryl White, the current chief executive officer of BMO Financial Group:

What . . . remains the same — and shines through in this history — are the values shared by ten generations of BMO bankers which motivated their actions. Today, we define them as Integrity, Empathy, Diversity, and Responsibility — but, whatever labels are used, they form the foundation that inspires us to help businesses and individuals to succeed and, by doing so, to make our nation and society more prosperous and purposeful.

If you’re a survivor of the uber-capitalist rigour of the modern financial sector, you might think that White is speaking about attributes needed for social work, not banking. Lowly branch staff struggling to meet their sales quotas might be more cynical about the so‑called BMO way. They likely don’t subscribe to the self-mythologizing notion that their job is far above the squalor of making a few cents on every transaction or the relentless pressure to cross-sell products.

Mussio, who previously published A Vision Greater Than Themselves: The Making of the Bank of Montreal, 1817–2017, had full access to BMO’s archives and with it the potential for new insights. However, writing about an institution when you have the boardroom’s full cooperation is like writing an authorized biography of a celebrity. There are limits: Too sanitized, and no one is going to read it or believe it to be creditable. Too revealing or provocative — well, that’s just not going to happen. The arrangement makes it difficult to communicate the reality of decision making , as Bryan Burrough and John Helyar did brilliantly with Barbarians at the Gate: The Fall of RJR Nabisco, in 1989, or as Liaquat Ahamed did with Lords of Finance: The Bankers Who Broke the World, which won the Pulitzer in 2010.

By contrast, Whom Fortune Favours makes it seem that all decisions are rational, that all executives are collegial. The inner workings of First Canadian Place come across as rather boring , especially when the reality in most financial institutions — in most large companies, for that matter — is a continuing tumult as rapacious executive egos attempt to overturn whatever illusory methodology exists.

Mussio’s first volume includes valuable historical material, but the second volume, covering 1946 to 2017, is more engaging: we’re more cognizant of the newsworthy situations being described. For instance, it was a seminal moment when BMO decided, in 1984, to take over Harris Bankcorp. Canadian companies rarely bought U.S. ones; it was usually the other way around. “More than any other single acquisition, event, or initiative,” Mussio explains, “the purchase of the Harris Bank of Chicago has been seen as the kind of big move that many banks and bankers are called to aspire to, but that few actually have the opportunity to realize.”

“The inner workings of First Canadian Place come across as rather boring .”

On paper, the acquisition seemed promising. BMO would have access to Harris Bank’s well-respected trust business and trading acumen and would gain its U.S. cash management skills and domestic loans experience, as well as money market, bond trading , and underwriting capabilities. With a solid position at home, significant international exposure, and superior account management and operations savvy, BMO believed it could exploit Harris Bank’s attributes both in Canada and worldwide.

Although Harris grew to contribute about 25 percent of adjusted company earnings by 2017, the merger didn’t start off well: “For many years, the culture at Harris Bank was reluctant to accept that a Canadian bank had taken over this Chicago institution. One veteran of the BMO-Harris experience recalled that more than a few Harris executives of the era seemed to ‘resent being acquired and resentful that [BMO] was going to manage them.’” Perhaps the new bosses were guilty of “trying to be way too nice.”

Through the 1980s and 1990s, many BMO suits thought the acquisition “a disaster” and let Harris continue to chart its own course. Not everyone believed the rocky relationship was the fault of the Canadians or an issue with their non-assertive demeanour; many just didn’t think Bay Street could cope with the rougher world of American finance. While things have improved since those early days, the Harris Bank story remains a cautionary tale for capital heading south — one that perhaps informed TD Bank’s more successful move into the U.S. in 2008.

One of BMO’s most innovative initiatives was its early foray into online banking , well ahead of most others and certainly as the leader of the Big Six. In October 1996, it launched mbanx, “an entirely new virtual banking enterprise designed to meet the needs of financially active consumers across North America at the highest standards of speed, convenience and service quality.” The bank promised a game changer, telling customers that “you deserve better” and “maybe it’s time for a new relationship.” But BMO’s operations and culture weren’t prepared for the advertised revolution: “mbanx was almost certainly a visionary and bold move, but the project also proved to be a serious overextension.” Mussio quotes one insider who said that “the launch looked very well done” from the outside, “but behind the scenes it was chaos.”

It would be a mistake, Mussio argues, to view the digital experiment as a failure. In many ways, it “crystallized some of the enduring qualities of an evolving purpose for the Bank. One of the most persistent legacies of the mbanx era was the kind of cultural values that began to be articulated as a conscious program of organizational life. The five values were: (1) change is good; (2) we believe in better; (3) a promise is a promise; (4) make simple rules that work; and (5) everyone is important.” Of course, only in Canada would a humiliating debacle like mbanx be seen this way, rather than getting the senior management fired or shaking public confidence.

“Public opinion was clearly worried about fewer banks — with even less competition and choice.”

Another high-profile failure: the unconsummated merger with the Royal Bank in 1998. To compete internationally, the argument went, Canadian banks needed to be larger, more capitalized. When it became known that BMO and RBC planned to merge, CIBC and TD didn’t want to be left behind and decided to elope too. Public opinion was clearly worried about fewer banks — with even less competition and choice. In light of the prevailing sentiment, Paul Martin, then finance minister, declined to approve the mergers. The potential BMO-RBC deal involved high-stakes politics and finance, as well as a glamorous Irish Canadian big wheel in the form of Matt Barrett of BMO. But Mussio’s scholarly recounting of events can feel more textbook than revelatory. You want to be taken behind the scenes. You want Barrett’s titillating marriage with the playgirl Anne-Marie Sten, just the year before, to help spice things up.

One of the most fascinating aspects of Whom Fortune Favours is the photographs: all white guys all the time, except for the last few pages. One, a picture of the main Vancouver branch, in 1952, is captioned “A bustling workplace.” But the word “bustling” feels incongruous with the book as written. As Whom Fortune Favours would have it, the bank business is always a dispassionate undertaking. There is little sense of the emotional impact it has on the people inside or their customers, let alone of what Canadians expect of a perpetually profitable enterprise. A hist­ory that truly places the storied institution within the broader societal context is yet to come. What Mussio has produced is a meticulous business case study, rigorously documented, that suggests the Bank of Montreal is best understood in its own world, not necessarily in the real one.