Professional Heckler: The Life and Art of Duncan Macpherson

In the Bora Laskin Law Library, at the University of Toronto, there hangs a mischievous portrait of Pierre Elliott Trudeau. The work is a curiosity. Painted in the 1980s, from photographs and memory, it was a guerrilla commission by Duncan Macpherson, the legendary (and by then semi-retired) Toronto Star cartoonist. The prime minister is shown seated and full-face, like a Tudor monarch. “A rose in one hand and a twinkle in his eyes,” the critic Christopher Hume said of it. “Trudeau and the Commons have refused to have anything to do with the work.” To library staff and patrons, Macpherson’s rebellion in oils is probably more familiar than his life’s work: some three and a half decades of brilliant, fleeting editorial cartoons. Yet Macpherson was both loved and feared as a master satirist.

Professional Heckler is the first biography of the celebrated cartoonist. It is also the first major writing project for Terry Mosher, who draws as Aislin for the Montreal Gazette. Mosher has been the unofficial historian of Canadian editorial cartooning since he worked on The Hecklers, an NFB documentary from 1975. Here he pairs interviews and reminiscences about the influential artist, who died in 1993, with material from an unpublished autobiography. He has also uncovered fresh troves of Macpherson originals at the Star offices and an unnamed New York institution. But don’t expect too many scholarly details: Mosher is a raconteur and fellow satirist.

An ephemeral business, editorial cartooning: its subject is the politics of the moment. The Cold War era, neatly spanned by Macpherson’s career, afforded ample opportunities for send-ups. Cartoons sold papers in 1958, when Macpherson was recruited to the Star by another legend, Pierre Berton; Time reported on his starting salary, which was equivalent to six figures today and rumoured to exceed the editor-in-chief’s. The thirty-four-year-old had spent only two months on the job when he drew his most famous cartoon: John Diefenbaker, having just scrapped the Avro Arrow, exquisitely rendered as Marie Antoinette. The cutline read, “Then let them eat cake!” Berton later recalled, “The prime minister had been revered up till then. Macpherson turned him into a clown.” Or as the cartoonist Guy Badeaux (known as Bado in the pages of Le Droit) has put it, the image is Canada’s own Mona Lisa. 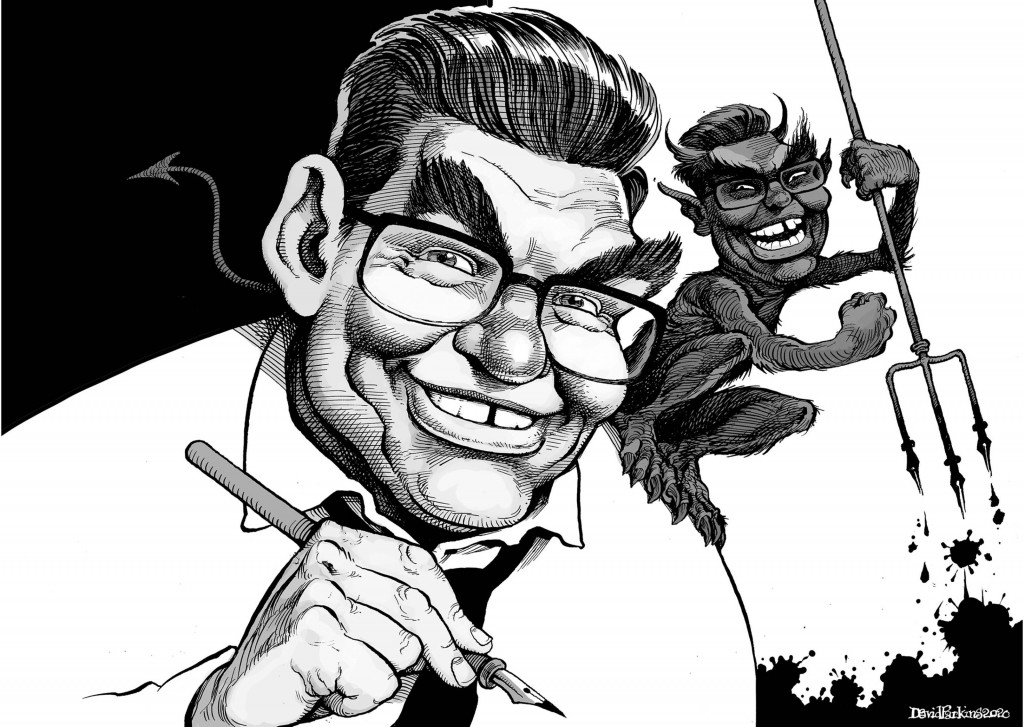 The devil was in the details.
Image by David Parkins

Such panto fantasies became Macpherson’s trademark and gave rise to the much-quoted epithet “a combination of Mary Poppins, Mark Twain, and Attila the Hun.” For staid, mid-century English Canada, this savagery came as a shock — although somewhat of a welcome one, considering the acclaim Macpherson received during his lifetime. Feted with solo shows at the McMichael and the Art Gallery of Toronto (now AGO) and a career retrospective at the Public Archives of Canada, he was the first editorial cartoonist to join the Order of Canada. When he won the Molson Prize, in 1971, the award committee dubbed him “a stylist in chastisement.”

While Macpherson’s punishing world evokes the carnivalesque of fairground and vaudeville, his style — honed in London, Boston, and, of course, Toronto — is in the grand tradition of Anglo-American satire. The New Yorker ’s Edmund Wilson once praised him as a more “grotesque” Lewis Carroll —a view reinforced by Macpherson’s own nods to the British writer and his illustrator, John Tenniel, like the “Cheshire banana” (Tory leader Robert Stanfield disappears; only his banana remains) or Stanfield and Trudeau as Tweedledum and Tweedledee, with the NDP’s David Lewis as Alice. The latter work won Macpherson his record sixth National Newspaper Award. Printed in tangerine, it forms the very ’70s cover of his 1973 annual.

Shy but physically imposing , the hard-drinking Macpherson was both mentor and enigma to Mosher, who was twenty-eight when they met. Mosher traces Macpherson’s early years in Scotland and in Toronto, where, in defiance of his father, he secretly studied art at Central Tech. After enlisting with the RCAF, in 1942, the championship high jumper won a war bond poster contest, which took him to London. Later, veterans’ funding sent him to art school. Beyond the homosocial antics of the press club, the book tells us little of Macpherson’s personal life. But he had a complicated marriage to Dorothy Blackhall, a friend of his younger sister, Fiona; their son, Ian, also became an artist.

Revival is Mosher’s aim, and his book furthers it in spades with a wealth of Macpherson works — though, regrettably, it provides neither publication dates nor an index. The emphasis is firmly on politics and public life, yet Mosher’s most arresting selections transcend the politics of their day, especially those dealing with war or human rights: an immigration minister building a wall, or the skull of an ancient soldier. These pieces show peerless draftsmanship in the classical tradition — savagery made sublime. Macpherson wanted to be a painter, but “making a living got in the way.”

It is a measure of Macpherson’s legacy that, many prime ministers later, it is his images that endure; the details forgotten, his subjects still resonate, as Professional Heckler shows. When he retired for the second time, in 1993, the Star published a special section. “A brawler and a gentleman,” wrote one of his few close friends, the journalist Jack Brehl. One rival simply said, “He drew so bloody well.”

Sarah Sheehan is a critic and former academic living in Hamilton.