Ice Walker: A Polar Bear’s Journey through the Fragile Arctic

As a parent, I remain a dud when it comes to shopping with my fashionista daughter and playing sports with my athletic son. What I loved, when they were younger, was reading with them — especially snuggling together in bed with chapter books long after they knew how to read by themselves. We had ground rules: no skipping ahead (I still blush at being caught in the act more than once by a wakeful offspring) and, most important, the choices had to appeal to both adult and child. I wasn’t going to waste my time with a series like the Baby‑Sitters Club; my kids could indulge in those guilty pleasures by themselves. Instead, we plunged into Lloyd Alexander, Susan Cooper, Philip Pullman, L. M. Montgomery, Janet Lunn, Farley Mowat, and C. S. Lewis. It’s a tradition that I have maintained with my grandchildren.

James Raffan’s Ice Walker is a happy addition to our reading list. That is not to suggest it is too elementary for grown‑ups — not at all. Like the best multi-generational books, it creates charismatic animals, thrums with an enticing narrative pace, and instills an imperative moral choice. Ice Walker is elegant in its telling, heartbreaking in the dangers its characters face, and compelling about our shared existential threat. It belongs to the naturalist genre that includes Fred Bodsworth’s Last of the Curlews, a haunting tale about a lonely migratory bird, the Eskimo curlew, on the edge of extinction and in a desperate search for a mate. As generations of readers know, a budding romance ends in tragedy when a farmer looks overhead, sees the couple swooping and trilling in a courtship ritual, and callously hauls out a loaded shotgun.

Nobody talked much about climate change when Bodsworth published Last of the Curlews in the mid-1950s. Back then, the threat was greedy hunters killing for adventure. In that sense, Raffan inhabits a different milieu than his literary predecessor. The son of Scottish immigrants, he grew up studying and exploring the natural world, travelling from sea to sea to sea by canoe, snowshoe, sailboat, and even icebreaker, and honing his skills as a geographer, explorer, and raconteur in books, articles, speeches, and podcasts. A modern naturalist who wears his erudition lightly, Raffan is a former curator of the Canadian Canoe Museum, in Peterborough, Ontario, an international fellow of the Explorers Club, past chair of the Arctic Institute of North America, and a former governor of the Royal Canadian Geographical Society. 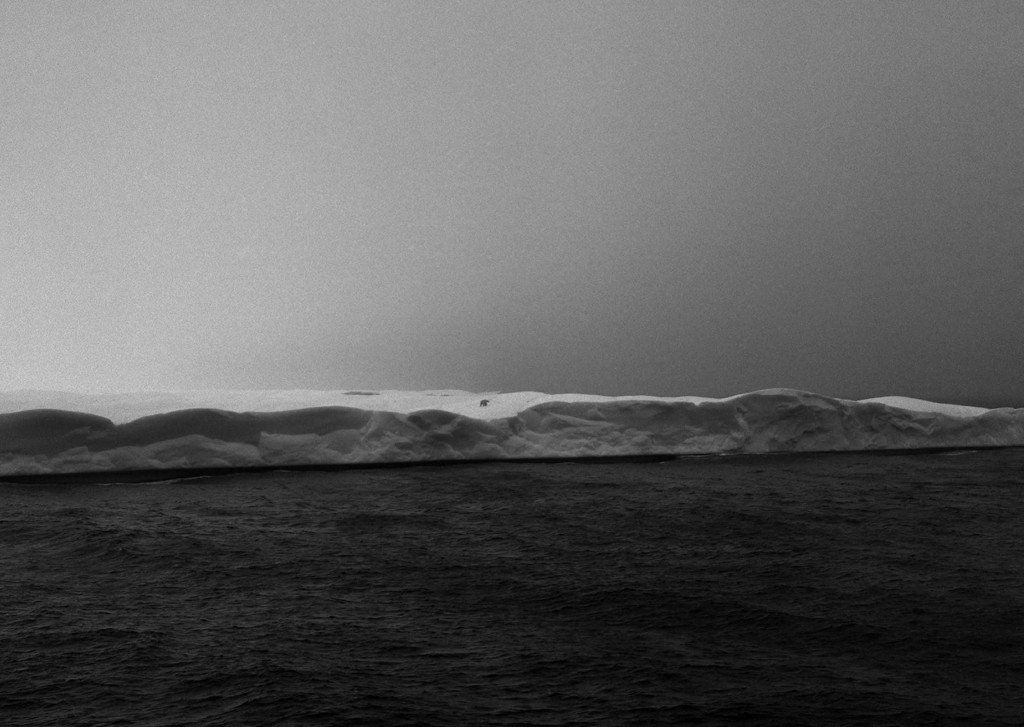 Survival in a fast-changing world.
Image by Bryan Dickie, 2012

With Ice Walker, Raffan introduces us to Nanurjuk — or Nanu — a seven-year-old polar bear who roams the shores of Hudson Bay north of Churchill, Manitoba. For thirty-six months, with the watchfulness of a 24‑7 camera, we follow her through the Canadian Arctic, learning fascinating details about her characteristics and her habitat. Early on, Raffan explains how bumps, or papillae, in the hair-covered soles of Nanu’s feet are a “two‑way communication system.” They sense crucial differences in the texture and temperature of the ice, and they send out messages, through her skin glands, to other bears crossing her tracks. They signal that she is healthy and ready to mate.

Nanu’s first pregnancy ended in the stillbirth of two cubs; she had not gained enough weight to nurture the fetuses. Now she must mate successfully and hunt more ruthlessly; then she must find a secure den in which to bear and feed her young.

In telling us Nanu’s story, Raffan reveals the underlying theme of his book: for many thousands of years, polar bears and polar people have cohabited in one of the most unforgiving environments on the planet, largely because of their common ability to hunt and harvest seals. It is this “triad of bear, hunter, and seal — and the ice on which they live — that is central to the survival of the Arctic world.” Raffan insists that each of them has “the right to thrive and to be cold.”

If only the ice today were as reliable as it was when Nanu was a cub. Her mother knew a spring world “of vast sky and ice with occasional leads of open water.” But Nanu “lives in a world with wet skies, more water and altogether less ice.” The climate crisis is a danger not just to one polar bear but to all of us, of course. The “drip, drip, drip of melting pressure ridges might as well be the tick, tick, tick of accelerated time in a fast-changing world,” Raffan writes. He describes an environment where almost everything is powered by diesel, a dangerous pollutant that can be devastating to the “feathers, skin or coat of a seabird or mammal.”

Thanks to Raffan’s storytelling skills, we engage readily in Nanu’s struggles to survive, along with the successful birth of her cubs, Sivu and Kingu. They are as real to us as a litter of kittens or puppies born to the family pet. They tumble, they fight, they snuggle into their mother’s belly when they want to nurse or sleep. And eventually they all emerge from the safety of the den and move into the lengthening daylight of a new and changing world, one in which high-powered rifles have replaced harpoons and noisy, smelly snowmobiles have mostly supplanted dogs and sleds.

As cute as the two cubs are, they are also an encumbrance. In the same way that toddlers slow down a woman trying to earn a living, Sivu and Kingu often distract Nanu in her hunt for seals, necessary to replenish her fat stores so that she can protect her cubs from marauders — including wolves and other bears.

By adopting a documentary approach, Raffan largely resists the temptation of anthropomorphism, so beloved by naturalists, although he does make occasional comparisons between bears and humans. Early on, for example, he points out that Nanu’s back feet step perfectly into the imprints left by her front ones, thereby saving energy that she would otherwise need for all four to break through the deep snow. The impression is that “she is on just two legs, upright like a woman.”

Still, Nanu is not chatty like Charlotte, the arachnid spelling champ created by E. B. White, or zany like Mutt, the Dennis the Menace wannabe in Farley Mowat’s The Dog Who Wouldn’t Be. No, Nanu is a real polar bear, or so she seems, a notion that is reinforced by captivating black and white photographs.

Raffan largely resists the temptation of anthropomorphism, so beloved by naturalists.

But is there something wrong here? Ice Walker is promoted as non-fiction, yet is it actually a novel in camouflage? Anticipating this tension between genres, Raffan explains in his author’s note why he, a writer who began his career as a marine biologist, “would be stretching the bounds of creative nonfiction with a story about a made-up bear.” The scientist in him couldn’t invent dialogue to put in Nanu’s mouth or include anything that he didn’t know to be accurate. But that left a gap between data and comprehension, facts and persuasion. So he created ursine characters with names and personalities and invited us to enter their world in the hope that we would share his apocalyptic vision.

Raffan has pre-empted questions about authenticity, a contentious issue in naturalist writing in Canada since the mid-1990s. That’s when the journalist John Goddard accused Mowat of “selling fiction as non-fiction” and having “broken a trust with his public,” with such Arctic-focused books as People of the Deer and Never Cry Wolf.* The magazine Saturday Night published Goddard’s devastating critique as its May 1996 cover story, with an illustration of an impish Mowat with a Pinocchio nose. The article unleashed a scandal that hounded the beloved and best-selling author until his death in 2014.

Thirty years ago, I was both shocked by Goddard’s accusations and troubled by Mowat’s justifications that the larger truth mattered more than a pedantic recounting of the evidence. Mowat was right to raise the alarm in the 1950s about starvation among the Ihalmiut people, because Ottawa had forcibly relocated them away from their traditional hunting grounds. He was also correct in defending wolves from the bad rap they had been given in popular literature as nothing but ruthless predators. But I wish he had explained up front the rationale behind his passionate storytelling. That’s why I appreciate Raffan and his author’s note about blurring some of the lines between fact and fiction. I also know I will be prodding my grandchildren for their thoughts once we have finished Ice Walker. After all, arguing about books is one of the great pleasures of reading them together.

Sandra Martin is the author of A Good Death: Making the Most of Our Final Choices.

Farley Mowat was a compulsive liar and a fraud. He is the Stephen Glass and James Frey of Canadian literature. Out of his own neurotic compulsions, and for his own aggrandizement, he slandered the work of federal departments and lied to present himself as independent of them. Mothers with happy memories of reading The Dog Who Wouldn’t Be to their children might feel inclined to defend Mowat and perpetuate his falsehoods, but Sandra Martin has a chance to serve her grandchildren better.

Martin says that James Raffan hopes we will share his “apocalyptic vision” of the polar bear. But according to the London-based Global Warming Policy Foundation, “Since 2005 . . . the...