There is a fundamental and irreconcilable difference between Americans and Canadians on the issue of freedom of speech or expression. Although both of our nations value and protect this human right, the limits to which we take it are markedly different. For Americans, it is inalienable, intrinsic to the dignity of the individual; while the Canadian Constitution subjects it “to such reasonable limits prescribed by law as can be demonstrably justified in a free and democratic society.” Rights discourse in Canada, although grounded in a conception of the individual, is more concerned with the welfare of the community than is its American counterpart. If the United States is founded on the myth of individual rights, then Canada is founded on the myth of social cohesion. And nowhere is this more evident than in libraries, where the tension plays out in surprising and consequential ways.

Founded in 1876, the American Library Association has had a Canadian presence since at least 1900, when its yearly conference was held in Montreal. (The lesser-known Canadian Library Association was founded in 1946 and, unfortunately, dissolved in 2016.) As the pre-eminent organization of its kind, the ALA sets the tone for libraries and, importantly, accredits university programs across Canada. This accreditation, which is granted only after an applicant school proves that it can reproduce the standards and values espoused by the ALA, is no small thing: most career positions throughout the country, in either public or academic libraries, now require an ALA-approved graduate degree. Through its outsize influence, then, the Chicago-based non-profit reproduces its ideology in our librarians and library administrators, while it directly and indirectly shapes the policies and views of the institutions they run.

The ALA’s position on freedom of expression is a severe one: it is “an inalienable human right and the foundation for self-government” and “encompasses the freedoms of speech, press, religion, assembly, and association, and the corollary right to receive information without interference and without compromising personal privacy.” Such absolutism requires a library to provide material of every kind and to play host to any group or speaker, since doing otherwise would interfere with its ability to impart information. Under this formulation, the content of what’s shared is value neutral, with all value being placed on its availability and transmission: fake news, racist hyperbole, and exclusionary ideologies have the same worth as more reputable and inclusive information. In this context, the only option for those who disagree with a speaker or group is to “respectfully challenge each other’s ideas and not the library’s democratic mandate to provide space for both,” as the head of the Toronto Public Library, Vickery Bowles, has explained. Thus, a library itself is somehow above criticism for what’s said inside it. 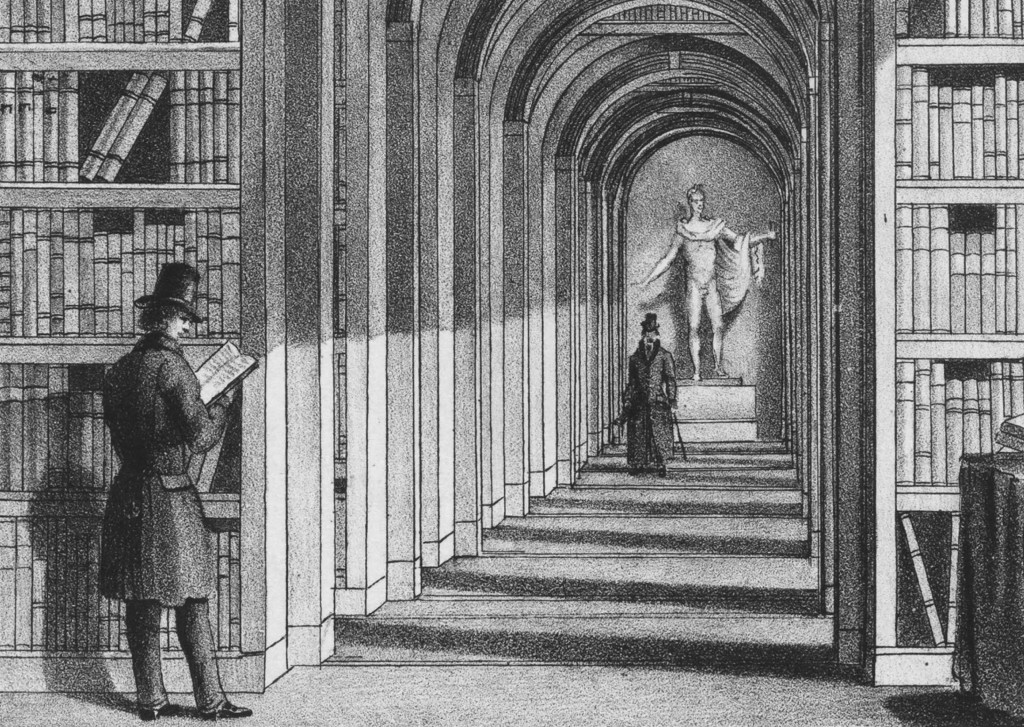 The tension plays out in surprising and consequential ways.
Image by Louis Samyn, c. 1825–50; The Rijksmuseum

But the Charter of Rights and Freedoms does not provide for absolute rights, inalienable from the individuals who hold them; rather, our rights are guaranteed alongside “reasonable limits.” (Those who crafted the Charter, of course, had the benefit of seeing how the American model had actually played out.) More fundamentally, it reflects our more social conception of the greater good, with individual rights being held in service of the protection of the whole. Remember, in Canada, your rights end where mine begin, and the contestation between them is an ongoing balancing act.

The creeping Americanization of how we understand freedom of expression has led to scandal, including that surrounding the controversial writer Meghan Murphy, whom Bowles allowed to speak at a Toronto Public Library branch in October 2019. (Consider that even Twitter has removed the welcome mat for Murphy, because of her repeated use of anti-transgender rhetoric and misgendering of her critics.) Elsewhere, a trustee of the Edmonton Public Library was forced to resign in early 2020 for her vocal criticism of free-speech absolutism. And in Ottawa, the public library was taken to court in 2017 when it cancelled a screening of the Islamophobic film Killing Europe. In that case, the Ontario Court of Justice declined to rule on the real Charter issue at hand, finding instead that the library had acted appropriately within the bounds of contract law and was within its rights to cancel the screening.

No doubt, many maintain, along with the ALA and its Canadian adherents, that libraries need to provide a full range of views that represent an entire community. And in the American formulation, this might be correct. But is it also correct that Canadian libraries, subject to Canadian laws and social mores, should provide platforms for groups whose messages hurt others? If by providing space for one you are effectively excluding the other, then you are not representing the entire community or diverse viewpoints; you are merely providing space for hatred to breed. If trans people or Jewish people or any other people are frightened (or otherwise unable) to make use of a library because that branch has hosted groups hurling hateful or violent claims, then the avowed goal of freedom of expression itself has been undermined.

What’s more, this is an issue of cultural sovereignty. Should Canadian libraries be subject to the ideological requirements of a foreign organization that promotes an imposed understanding of rights? Shouldn’t our libraries, available to all and certainly a linchpin in our society, be replicating our values based on our own Constitution? So long as Canadian libraries require their workers to hold degrees from ALA-accredited universities, this tension will remain and future confrontations will be inevitable.

Michael McNichol serves as co-chair of the Forum for Information Professionals.

As a retired librarian, I was pleased to see this piece. While pursuing my master of library and information science degree, I had a general introduction to the Canadian library scene, where people took pains to distinguish our approach from that of the United States, while recognizing how we were, essentially, all part of larger Anglo-American library traditions.

McNichol has raised two important points: First, the different ways we can view freedom of speech. I do not have a solution to the dilemma facing librarians. But libraries have dealt with this in many ways in the past; the tendency has been to safeguard their independence when making decisions about collections...