The Captain Was a Doctor: The Long War and Uneasy Peace of POW John Reid

Prisoner-of-war accounts of the Second World War fill a significant number of shelves, with some of the most shocking set in Japanese camps: Pierre Boulle’s The Bridge on the River Kwai, from 1952; Gavan Daws’s Prisoners of the Japanese: POWs of World War II in the Pacific, from 1994; Dave McIntosh’s Hell on Earth: Aging Faster, Dying Sooner, from 1997; Alistair Urquhart’s The Forgotten Highlander: My Incredible Story of Survival during the War in the Far East, from 2010; Richard Flanagan’s The Narrow Road to the Deep North, from 2014; Louis Zamperini’s two memoirs, both titled Devil at My Heels. The list goes on and on. It’s not that these novels and memoirs are all  identical — they aren’t. But in so many of them, there is a pivotal sameness that gathers around well-documented cruelty, as well as the stoic courage that inevitably envelops many of the survivors. The field has gotten to the point where any addition, especially so long after the war, is bound to be regarded with some initial skepticism. This is not to diminish wartime brutality or to belittle the survivors, but one does wonder if any new POW narrative can reconfigure what’s become something of a familiar story.

In The Captain Was a Doctor, Jonathon Reid has created a complex tale of his own father’s experiences and takes us into territory rarely seen. John Reid was stuffed into a soldier’s uniform just nanoseconds after he graduated from medical school in Toronto. Jack, as he was known, was then dispatched to Hong Kong, a posting “set in motion by a brief tropical medicine course he easily might have skipped.”

Reid arrived just three weeks before the British colony’s capitulation to the Japanese forces, in late 1941. The bare bones of his account track with what’s generally known to have happened during that bewildering and ugly time. The treatment of Canadian POWs was particularly gruesome. A year after capture, just when things couldn’t get worse, hundreds of Canadian and British military prisoners were unexpectedly evacuated to Japan for years of forced labour and further privation. Then the bomb to end all bombs fell in 1945. 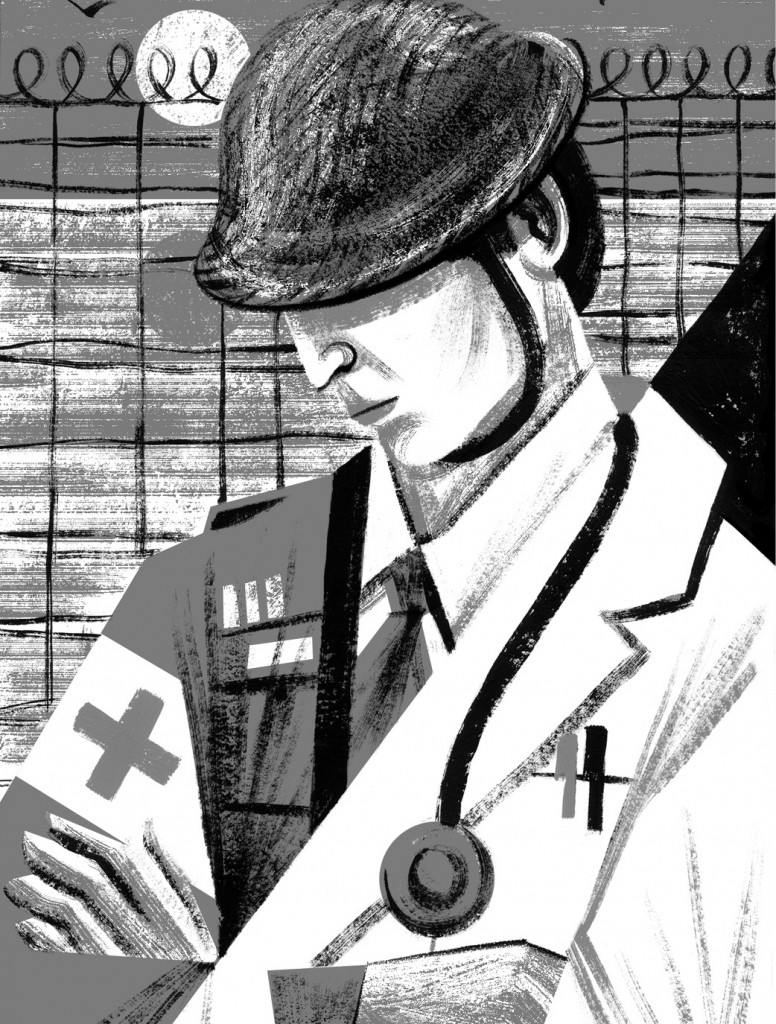 The dualities of a complex man.
Image by Chloe Cushman

But the bare bones are just there to hold up the tale of a man who started life with a proverbial silver spoon in his mouth, a man who nevertheless dreamed beyond his position of privilege. Born in October 1913, Jack was a strong humanist and poet manqué who fell helplessly in love with the artistic girl of his dreams. He went into medicine with a dollop of altruism and then, almost before he could pick up a scalpel, was whisked away from his sweetheart’s side to find himself in a world that was simultaneously cruel and an open canvas for a good man to conquer fear, sadism, and racism. The wartime transformation of Jack Reid was fashioned by necessity, dragooned as he was into a token POW leadership position, being the only officer among his men. Soon enough, and reluctantly, he was forced into playing God with people’s lives, which ate away at his soul. But in the end, the role enabled him to teach basic decency to even his captors — and to come to the rescue when one was subsequently accused of war crimes. This is a big part of why The Captain Was a Doctor is so compelling and so different.

The Enola Gay’s flight over Japan, in August 1945, barely gets us halfway through the book. We are then launched into Jack’s postwar transformation and the inchoate — almost equally cruel — consequences of post-traumatic stress disorder. No one called it PTSD at the time, of course. It was understood that war could screw people up, but they were also expected to get on with their lives. Damage wasn’t always easy to perceive at first, but Jean got more than a hint of what was ahead for her when her man phoned on the way home. He reached her from Pearl Harbor:

Reid’s low-key, almost cross-sounding murmurs were hard to understand, and what Jean could make out wasn’t what she was longing to hear. His voice was clipped, giving the basics of where he was, how he was coming home, handling this surreal reunion, hindered by technical difficulties, the best he could.

“Say something nice to me,” Jean finally blurted.

Reid’s questioning garble was lost on her, so she said again, “Please, say something nice to me.”

Her husband never managed that  simple act. Although he had married the young woman he adored — although he returned to her in Toronto and although they had two children — something had shattered inside him. He never really managed “nice” again. And it was her heart he broke, a few years later, when she discovered that he had created an entirely separate family on the West Coast — the whole kit and caboodle — while completing his residency.

Jonathon Reid, the son and author, has painted a picture of a handsome and charismatic father whose triumph over hate is matched by his mother’s matter-of-fact and faithful triumph of never blaming the damaged man who abandoned her and her two young boys. Jean Reid never looked upon Jack as anything but a shell of the husband she had once loved so fiercely, a remote and broken stranger who had been changed in ways she could never fully fathom.

Structurally, The Captain Was a Doctor is adroitly balanced between war scenes and penetrating close-ups of the home front, between the postwar life in Toronto and the hidden one in Vancouver. The dualities support the complex nature of Jack Reid himself. The son comes to share the conclusion of the mother: that the war had changed the father so much that he was incapable of returning to normalcy. For the doctor, pre-war life was an existence forever shrouded; for his abandoned sweetheart, it remained a light that glimmered from further and further in the past.

Quite wonderfully, Jonathon Reid has deployed his well-honed skills as a filmmaker and teacher to describe a complicated time. His glimpses of the home front reinforce some of the horrible things that happened in the camps a world away. His meticulous research captures the afflictions that attended POWs and that his sensitive father was almost powerless to cure without adequate medicines. And his detailed description of the war’s end is mesmerizing. The son quotes his father, who quotes the camp commandant, who announces it’s all over. This is a pivotal juncture in the account, and also something quite unlike the usual stories that have come out of wartime Japan:

It was of a different tone from any official speech we had heard before. [He said] we had been honourable men who had fought in a hopeless situation and that they honoured us, and there was no stigma to being a prisoner under such
circumstances, and saluted us when he got through his speech.

The men thought that was really something. They felt the war must really be over now.

This speech and the commandant’s tone is also a tribute to Reid’s own disciplined decency, which even the Japanese recognized throughout his incarceration.

As for the author’s own story of growing up within a dichotomized family, it is also moving. He offers evocative glimpses from a boy’s perspective of the tensions that inevitably arose, including a telling surprise visit by his father to a Georgian Bay cottage, to collect his sons. The boys were there with family friends, Jack’s former medical colleague and his wife, who simply could not bear to witness the unexpected arrival, such was her rage at the betrayal of Jean. (It’s a scene that really bores into your consciousness.) And after his father’s death, in 1979, it is Jonathon who has to negotiate with the Bureau of Pensions Advocates for a fair distribution of Jack’s pension between the two widows, an event that finally brings him into contact with the other Reid family on the West Coast and that “sowed the seeds of this book.”

A general lack of bitterness pervades The Captain Was a Doctor and is what marks the book as a very special addition to the ranks of POW accounts. During his incarceration in Japan, for example, Jack Reid used all of his quiet resolve and dignity to pacify the expected cruelty of the prison commandant: rather educated and able to speak English, Masao Uwamori “would prove over time to be someone Reid could manipulate and bend to his views and aims. The positive consequences of this influence on Uwamori’s thinking would be crucial to the men’s survival.” The doctor literally willed his captor into ordinary decency — reawakening the man’s dormant compassion and bolstering the spirits of those under Reid’s care. After the war, Uwamori was indicted on charges of “abusing prisoners and causing many of them to die” and was facing an almost certain execution. It was the doctor’s written testimony that kept the noose from around the officer’s neck — explaining how the commandant transferred the most sadistic guards and took risks to find better food and some medicines for his prisoners.

The Captain Was a Doctor is a powerful saga, especially at a time when charges of overt and systemic racism can be hurled about with abandon. It is an extraordinary and redemptive reminder of the basic decency in imperfect human beings that can come to the surface, despite a prevailing atmosphere of heightened distrust.