War: How Conflict Shaped Us

Canadians don’t like to think about war. As the historian Tim Cook shows in his most recent book, The Fight for History, this country largely forgot about the Second World War for fifty years. It was only in the mid-1990s that Canadians were finally moved by the CBC’s coverage of D‑Day and V‑E Day anniversaries — coverage that showed what our soldiers had done and how they were remembered by those they had liberated. The veterans’ parades in Holland and the crowds of cheering Dutch had a substantial impact. So too did the dedication of the Tomb of the Unknown Soldier in Ottawa, in 2000, and the watching crowd’s spontaneous placing of thousands of poppies on the granite memorial.

But when Stephen Harper’s government tried to commemorate the bicentennial of the War of 1812, most had a shared reaction of a different kind: people saw it as both an unimportant event and another of the prime minister’s attempts to glorify militarism. The government eased back, and the commemorations largely fizzled. That there would not have been a Canada if the Americans had won that fight did not seem to matter to scholars or the public. And by the time centenary celebrations of the Great War stirred other memories a couple of years later, there were no veterans left to honour in person.

Margaret MacMillan knows a great deal about such ambivalence. She once proposed a “War and Society” course at Ryerson University, only to have a visiting educational consultant advise her to change the name to “A History of Peace.” As she points out in her new book, War: How Conflict Shaped Us, the study of war is now largely ignored in most Western universities, because simply researching or thinking about conflict implies approval to too many. And even though courses on military history can put bums in seats, and even as fewer and fewer students choose to major in history, departments are reluctant to offer them. (When a chair of hist­ory at York University once suggested adding a few, his colleagues rejected the notion out of hand.) The disconnect is curious, MacMillan notes, because we live in a world shaped by war, and we need to study its causes, its horrors and glories, and its past and present effects. We need more research on the subject, in other words, not its removal from curricula. 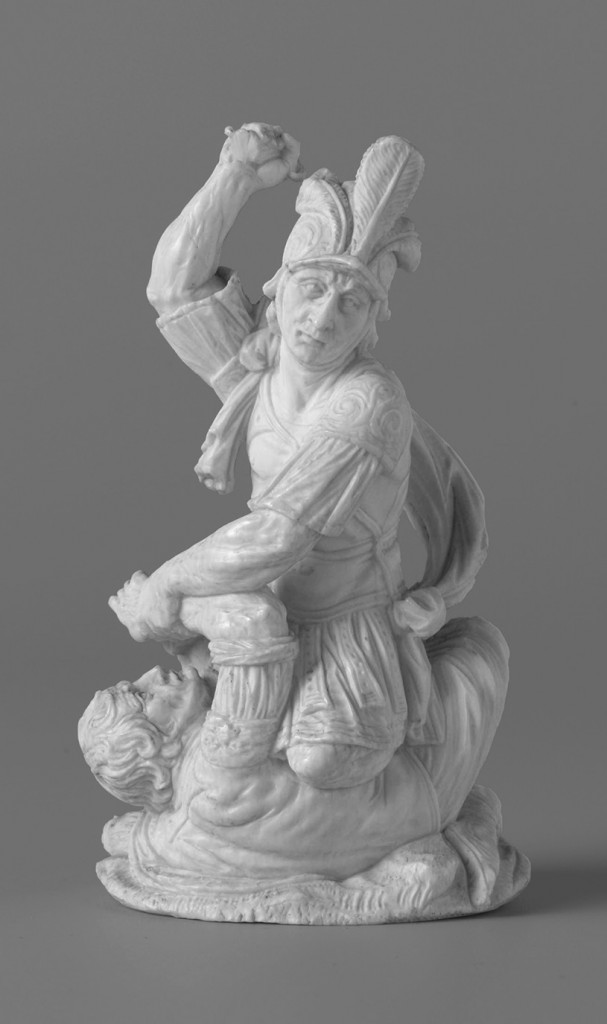 It's in our bones.
Image by Anonymous, Two Warriors Fighting; Rijksmuseum Amsterdam

MacMillan makes another important point: historians and readers must remember that those who lived in the past had their own values, principles, and attitudes, and they can be understood only in context. Soldiers were often brutal and licentious, but so too were the times they lived in. We can be shocked and horrified, but we should try to understand how and why they acted as they did. This takes work. Today, those wishing to pull down statues are often applying modern morality to another era. This makes for bad, easy history, and it is important for a historian of MacMillan’s stature to stand up for the way the past should be handled.

Margaret MacMillan was a little-known Ryerson professor when she applied to Canada’s Social Sciences and Humanities Research Council, in the 1990s, for research funding for a book on the Paris Peace Conference. She was turned down, SSHRC told her, because her approach was so old-fashioned. When she completed the manuscript of what became Paris 1919, early in the 2000s, she offered it to Harvard University Press, which said it could not afford to publish books that so few would read. (This was arguably one of the worst decisions in the press’s history, and one that says a good deal about academic publishing.) When her book finally found a home with a trade publisher, in London, it caught the public’s attention, became an enormous bestseller, and won a host of prizes. Soon MacMillan was provost of the University of Toronto’s Trinity College, before becoming warden of St. Antony’s College at Oxford, in 2007. Other bestsellers followed, notably Nixon in China and The War That Ended Peace.

Since publishing that first book that so few would supposedly read, MacMillan has received multiple honorary degrees and become an officer of the Order of Canada, in 2006 (she was promoted to companion in 2015). And in 2018, she became a Companion of Honour, one of just three Canadians presently recognized (the others being the retired general and diplomat John de Chastelain and Margaret Atwood). It seems that well-written and engaging narrative history isn’t so old-fashioned after all.

Certainly War, based on MacMillan’s 2018 Reith Lectures, commissioned by the BBC, is selling a lot of copies. Organized in thematic chapters, it is written with style and confidence, and it displays her encyclopedic knowledge, which covers thousands of years. We learn about the reasons for armed conflict, how technology is employed, and how warriors are made. War, MacMillan tells us, is not an aberration. It is in our bones. The need for security led people to organize themselves into tribes and eventually states and nations, which they discovered was an efficient way to wage battle. And when failed states fail at war, their civilians suffer the most (she estimates, for example, that 50 million on all sides died during the Second World War from bombing, genocide, disease, and starvation).

“It is important for a historian of MacMillan’s stature to stand up for the way the past should be handled.”

MacMillan is especially good on the role of women, noting that female warriors have played prominent roles over the centuries. In the Soviet Union’s Great Patriotic War against the Nazis, for instance, they served as front-line fighters and as pilots. Of course, as she also notes, the Red Army took a terrible revenge on German women, raping hundreds of thousands of the young and old as it moved west. After V‑E Day, Fräuleins, trying to survive in a ruined nation, had liaisons with Allied servicemen and were scorned: “It took six years to beat the German soldier,” one bitter joke went, “but it only took five minutes to win over a German woman.” Decades later, rape as a weapon of war has remained a potent tactic. In the savage fighting that followed the breakup of Yugoslavia, in the 1990s, “Serb rapists took pleasure in telling Muslim women that they would give birth to future Serb warriors,” and the Serbs carried out “public rape to intimidate and gain information as well as to encourage non-Serbs to flee.”

I was in the Canadian Army for a decade, beginning in 1956, and as I served only in Ontario, I never heard a shot fired in anger. What I remember is the pleasure of being among ­hundreds of Royal Military College cadets in handsome scarlet tunics, accompanied by a military band and pipers and cheering spectators, staging splendid parade-square ceremonials with the colours flying and swords flashing. MacMillan rightly talks about the importance of such time-honoured training and about the discipline it takes to make a warrior.

I also recall one particularly exhausting week-long exercise in the field and thinking that I might never get clean again. And I remember my friends who went to Europe as part of the 5,000-man NATO brigade. They knew they had only thin-skinned three-quarter-ton trucks to take on the Soviets — not armoured personnel carriers — but they fervently believed they were part of the best little army in the world (and certainly the best in NATO). They were convinced that they would beat the Red Army if it came to that. The utter weariness that’s inherent in soldiering and the esprit de corps that can overcome good sense don’t receive much attention in War but probably should have.

Organization is key to the conduct of war. Armies plan and prepare for a wide range of contingencies. Sometimes their leaders get it right, sometimes not, but discipline and organizational skill always remain. MacMillan notes the maxim that no plan survives contact with the enemy. France’s fortified Maginot Line is often cited as a classic plan that failed (although Alan Allport’s fine new Britain at Bay: The Epic Story of the Second World War, 1938–1941 convincingly argues the contrary). You could also point to just last summer: no soldier had planned for the death trap that long-term-care facilities in Ontario and Quebec became early in the pandemic. But in short order, the well-organized Canadian Armed Forces sent some 1,600 men and women into the homes, restored order, and began cleaning up the mess. It’s no surprise that the federal and Ontario governments went on to tap retired generals to manage the rollout of the COVID‑19 vaccines.

I also think of the impact my time in the army had on me personally. I was a feckless seventeen-year-old when I took the Queen’s shilling, and by the time I became a civilian again ten years later, I was a driven organizational whiz. “Get it done right, and get it done on time” had become my watchword. I planned almost automatically, did my work efficiently, and accomplished a good deal. As an academic, I found that I could organize a course or a conference or write an article or book quickly; unlike most academics, I delivered my work on time, and when asked for 1,000 words, I did not submit 5,000. I made my career out of the skills the military gave me. (Now I must admit my type A personality didn’t work quite so well when I tried to give my family a little military efficiency, but I eventually learned to control myself.)

That’s a roundabout way of saying that MacMillan is correct: today in the West, we see peace as the norm, but it’s really not. We rarely think about conflict, when we probably should. Nation-on-nation war has declined in the past seventy-five years, but there are small wars aplenty and civil wars without number. Indeed, controlling war is practically impossible. “Jaw, jaw” is better than “war, war,” Winston Churchill famously said. He was right, but the absolutely clear lesson of Margaret MacMillan’s book is that “war, war” will always be with us. There remains much to learn in that.

Re: “At Daggers Drawn,” by J.L. Granatstein

I read this review of Margaret MacMillan’s War: How Conflict Shaped Us with pleasure, and I have reflected on Granatstein’s remark that Canadians were uninterested in celebrating the War of 1812, even though there would be no Canada had it been lost. Remember that we academics give papers at meetings of American societies and that our scholarly worth is judged by them. How many attendees would there be for a session of the American Historical Association titled “Canada’s Genesis and the War of 1812”? That’s no way to get recognition as a historian.

Anyway, the consensus of American scholars has been that the United States didn’t want Canada; Canadians are wrong to...