Restoring Democracy in an Age of Populists & Pestilence

In his flight from the Furies, Orestes — who has committed a vengeful matricide — prays to Apollo for refuge. His prayer is answered, and he is whisked away to Athens, where Athena asks the “men of Greece” to judge “the first trial of bloodshed.” At her behest, the best citizens of the Attica peninsula come forward and place their pebbles into one of two urns. They vote.

Aeschylus tells this story in The Eumenides, the third play of his Oresteia trilogy. The Father of Tragedy grew up in the early period of Athenian democracy, as it was struggling to establish itself. His trilogy begins with Agamemnon, in darkness and suffering. But it ends with the light of wisdom and the establishment of political order and justice — and institutions to protect those things. It’s a story of the birth of a hero: not Orestes, but Democracy itself. The Furies and the destructive chaos they bring to their victims are banished; wisdom and moderation prevail over rage and excess. This is how democracy functions, according to Aeschylus.

His is not the only vision or version of democracy, of course. Nor is the Rubik’s Cube–like interaction between theatre, the courts, the people, and religion unique to ancient Athens. As the British archeologist David Wengrow and the late American anthropologist David Graeber pointed out in a recent Lapham’s Quarterly essay, participatory forms of government were and are more common than many previously believed: Mesoamerica, Mesopotamia, Ukraine, and the Indus Valley have all at some point organized their political lives according to some form of democracy. Closer to home, the Haudenosaunee Confederacy, of the Mohawks, Oneidas, Onondagas, Cayugas, and Senecas, has long existed as a participatory democracy and likely influenced the United States Constitution that was ratified in June 1788: “Both models stress the importance of unity and peace and provide freedom to seek out one’s success,” the confederacy’s website observes. 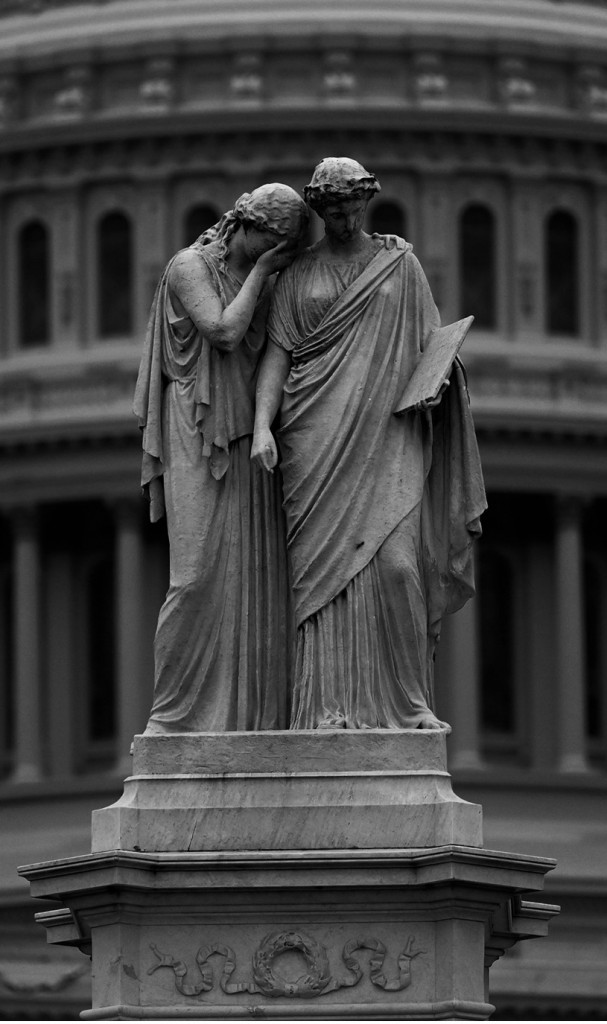 As rioters and insurrectionists stormed the U.S. Capitol on January 6, the Christian calendar’s Day of Epiphany, many wondered where all the wise men had gone. Would the Furies and chaos prevail after all? Enter Jonathan Manthorpe’s Restoring Democracy in an Age of Populists & Pestilence, a self-proclaimed “fast gallop over heavy ground.” This is the seasoned journalist’s response to the flagrant threats to democracy witnessed not only in Washington but throughout the United States, the United Kingdom, and Canada. A “fast gallop” it is: in some 300 pages, Manthorpe covers vast geopolitical terrain, beginning with the end of the Cold War, in 1989, and racing toward today. It is an extraordinary feat of endurance journalism born from years of watching democratic facades crack, and made even more urgent by the threat of COVID‑19, which he describes as a new “­central player” in democracy’s larger story. “The pandemic is a vivid reminder that a fundamental reason why humans created governments in the city states of Mesopotamia seven thousand years ago was for the protection and regulation of communal life. Among the essential responsibilities the authorities were expected to fulfil was maintenance of public health.”

Beyond the virus, what, Manthorpe asks, are the greatest threats to democracy? Increased inequality, for one: it’s no surprise that Thatcherite capitalism and Reaganomics, like a bad hangover, are in large part responsible for the malaise afflicting people in nations around the world; there’s less and less money to support them. Manthorpe looks to the International Monetary Fund to bolster his argument. According to a 2015 study on the causes and consequences of economic inequality, a country’s GDP actually shrinks by 0.08 percent every time the income share of the rich (defined as the top 20 percent) rises by a single percentage point. Translation: “The effect of giving tax cuts to the already wealthy is the reverse of claims made by advocates of trickle-down economics and of the equally fatuous idea that ‘a rising tide floats all boats.’ A rising tide does nothing for boats that have holes or that have already sunk.”

Governments that bailed out the banks during the 2008–09 global economic crisis only threw fuel on the fire (or water on the flood). While citizens suffered, a handful of predatory sociopaths were rewarded, and the average person was fed a lie. It’s as if government no longer felt the need to protect and regulate communal life; this had become the purview of banks that are too big to fail. One former investment banker, Rainer Voss, put it well in Marc Bauder’s documentary Master of the Universe, from 2013: “Je größer die Scheiße ist, desto dicker sind die Corporate-Social-Responsibility-Broschüren” (The deeper the shit, the thicker the brochures on corporate social responsibility).

The truly sad thing is that economic suffocation increases fear and fury. Growing economic disparity threatens communal life and leads to extremism — particularly of the right-wing, scapegoat-seeking variety — characterized by precisely those impulses that Athena once banished. And here we find another of the great threats to democracy: demagoguery. Manthorpe describes libertarianism and radical conservatism as “a snare and a delusion,” but he’s no more tolerant when it comes to “pure socialism.” Unfortunately, Manthorpe doesn’t exactly define “socialist,” a term that circulates with frustrating vagueness. It’s often used as a slur against Joe Biden, who’s anything but a socialist, and most of the policies considered socialist today would have been bog-standard centrist positions in earlier decades. Nor does Manthorpe identify instances of recent left-wing extremist violence — and we’d be hard pressed to actually find any. That’s because the bogeyman of the left-wing extremist isn’t the threat: right-wing extremism is. The violence of January 6 will serve as a reminder of that. (I imagine I’m not the only one with Yeats’s words on my mind: “The best lack all conviction, while the worst / Are full of passionate intensity.”)

As for the political centre, Manthorpe doesn’t see it holding: “Democracy’s tragedy over the last thirty years is the erosion of the centre as political parties and establishment classes have, to one degree or another, lost touch with large segments of their societies.” This trend tracks the disappearance of the middle class quite well. But the centre is experiencing more than just erosion: the entire political discourse has made a rightward shift. In other words, what once was centrist is now leftist; and what once was leftist is somehow radical.

“Western democracy lives and dies by the integrity of its institutions and of those elected to serve them.”

Manthorpe rightly worries about the middle class’s alienation and susceptibility to deceit and disinformation — what he describes as a “running battle” that taps into our human “propensity for blaming unexpected events on unseen forces with dominant powers.” At the heart of Manthorpe’s book is a kind of Hegelian notion of freedom: People are free when they can identify with their institutions. That is, they can participate and see that those institutions, in some way, reflect their values. This engagement is based on trust and truth. If people are victims of deception, that identification is invalid.

Western democracy lives and dies by the integrity of its institutions and of those elected to serve them. One of Restoring Democracy ’s most interesting discussions focuses on Canada, a country so often in the shadow of that shining beacon to our south. Drawing on Democracy in Canada, the recent book by the public administration scholar Donald J. Savoie, Manthorpe points to “defects that were built into Canada at its creation”: namely, the adoption of Westminster-style institutions without regard for the geopolitical context into which they were imported. Federal-provincial relations, especially, are a recurring point of judicial contention, so much so that there is a growing perception that the Supreme Court of Canada, rather than Parliament, is the real seat of authority. The shrinking role of elected representatives, together with the media’s celebritization and marketing of political leaders who are judged by their performance on screen rather than their platforms (if they have any), frustrates people still attempting to exercise their civic rights. Increasingly, we have to work harder to see past the smokescreens on our phones, computers, and televisions.

And it is tough to see through all the smoke, to say nothing of the Confederate flags that recently disgraced Capitol Hill, but Manthorpe has managed to spot a glimmer of hope. Oddly enough, it’s a glimmer of hope that the pandemic has revealed: in these dark times, we have a true opportunity to confront ourselves, our institutions, and our shared vision of the future. What do we want society to look like? How do we ensure the protection and regulation of communal life? Manthorpe recommends a top-down approach, in the sense that governments and their institutions must (re-)earn the trust of the people. The economic victims of COVID‑19 are “a ready-made audience for populists,” yes, but they can also be an audience for a different kind of spectacle: “A good place to start would be to revive the status of Parliament and the legislatures as the stages on which issues of the day are debated and resolved.”

Aeschylus ends his Oresteia trilogy with a spectacular transformation. The Furies become the Eumenides, or the Gracious Ones. Vengeance is superseded by grace, fear by wisdom. And the refrain “Cry, cry for death, but good win out in glory in the end” is transfigured into the celebratory “Cry, cry in triumph, carry on the dancing on and on!” Of course, there’s a catch: The Athenians have voted in equal measure for and against pardoning Orestes. The struggle between vengeance and justice is at a stalemate, even in democracy. It takes the intercession of divine wisdom to bring the trial to its end, and Athena casts the final ballot. Let’s hope she, or some other wise one, does the same for us.