Chasing Lemurs: My Journey into the Heart of Madagascar

In 2006, Keriann McGoogan, a twenty-five-year-old doctoral candidate in biological anthropology at the University of Toronto, led an expedition into the wilds of Madagascar. She undertook the journey to study lemurs, among the world’s most endangered primates, but her trip spiralled into a maelstrom of disease and political machinations, punctuated by masochistic hikes, traveller’s diarrhea, and one nasty evacuation. These calamities, and more, are retold in her engaging account of the trip, Chasing Lemurs. Readers unfamiliar with lemurs — or those whose knowledge of them derives entirely from the children’s TV show Zoboomafoo — will find a lot to chew on.

Owing to its eighty-eight-million-year separation from other land masses, Madagascar houses more endemic species than any other country. These include several hundred unique birds and reptiles and some 11,000 vascular plants. But lemurs are the island’s claim to fame: it contains 111 unique kinds. The indri, for example, is the largest living lemur and resembles “a two-year-old in a panda suit,” as McGoogan puts it. The aye‑aye, a nocturnal critter, drills holes in trees with its ferocious incisors and scoops out tasty insects using its long, bony middle finger. Most astonishing of all is the giant lemur, about the size of a gorilla, which roamed the forest as recently as 500 years ago — and might still be alive today were it not for human butchery. (Not for nothing, perhaps, “lemur” comes from the Latin word for ghost.)

McGoogan focuses her research on two subspecies. One, Von der Decken’s sifaka, is a “medium-sized diurnal lemur, with a beautiful, pure-white coat.” The other, the crowned sifaka, belongs to the same genus, Propithecus, but features a “chocolate-brown to black head, neck, and throat.” Both live deep in Kasijy, a wildlife reserve of fragmented deciduous forests. McGoogan is the first to collect behavioural data for the sifakas from within their natural habitat. This is important work; these species and others are critically endangered. 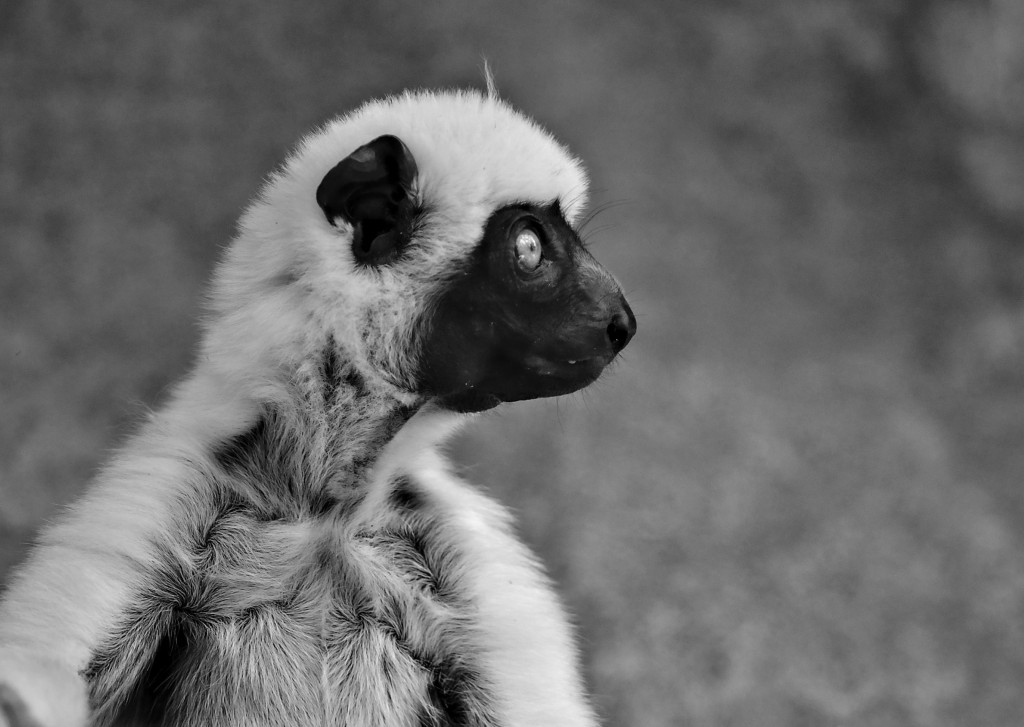 “Habitat edging” is a serious concern in lemur land. Since the 1950s, almost half of Madagascar’s forests have been converted to non-forest habitat, repurposed for farming or hacked away for charcoal production. Some lemur populations are “edge tolerant” and display no preference between the interior and the perimeter. Many others, including Von der Decken’s sifaka and the crowned sifaka, are “edge avoiders,” who are unable to subsist on the forest rim. For them, higher ambient temperatures along the edge may prevent “torpor,” a state of reduced body temperature and metabolic rate that lets them survive periods of scant food availability. Habitat edging also destroys leaves and insects, which tend to thrive on the perimeter and make up a significant portion of the lemurs’ diets. Out-of-control fires, meanwhile, lead to “forest fragmentation,” which McGoogan describes as “islands of forest surrounded by ‘seas’ of non-forest.” The conflagrations split pockets of habitat and create even more edges — exacerbating the problem.

But lemurs aren’t the only ones in danger. McGoogan notes several threats to the human beings who venture into their habitat. “Don’t get bit, don’t get hit, and don’t get lit,” a doctor advises her before she sets out. To that end, she prepares with countless prescriptions and shots. But even those don’t protect against everything. After returning to Canada, she contracts P. vivax malaria — to the astonishment of the staff at Toronto General Hospital, where she spends hours on a wooden bench, stomach reeling, head swimming, and waiting for a doctor.

As good edutainment should, Chasing Lemurs straddles the uneasy gulf between information and plot. The colourful cast of supporting characters includes McGoogan’s Malagasy research assistants, Andry and Sahoby, the jokester and the straight man, respectively; her doctoral supervisor, Shawn, a six-foot-five expert in primate conservation biogeography; and her supportive but worried fiancé, Travis, whose concerned emails pepper the narrative. McGoogan is the only woman on the trip. She relishes this status, even as it causes her some concern, knowing as she does that female travellers must navigate often shifting cultural norms and deflect unwanted attention. She worries, too, about being viewed as “less strong and less capable than the rest.” But her grit and determination dispel that worry rather quickly.

Madagascar, McGoogan notes, is one of the poorest countries in the world, with 85 percent of its population living below the poverty line. In a gut-wrenching passage, she describes two shoeless and malnourished six- or seven-year-olds in tattered dresses, their hands outstretched; one has a limp baby strapped to her back. This experience and others like it inspire McGoogan to organize a non-profit, Planet Madagascar, that conducts livelihood surveys and runs community conservation projects in education and fire management, among other ventures. (In 2016, it received a large grant from Ottawa.)

In spending time with playful primates and inspiring Malagasy, McGoogan isn’t monkeying around. While existential crises such as climate change and poverty may occur on an island, they’re not occurring in isolation. These are problems to be tackled worldwide — problems that will require the same bravery, creativity, and resolve she displayed in the wild. Madagascar and its lemurs are just the beginning.