Moment of Truth: How to Think about Alberta’s Future

This collection of thirteen chapters provides a window into the conservative brain trust that is helping Alberta navigate its relationship with the rest of Canada. Two of the three editors, Tom Flanagan and Ted Morton, along with Stephen Harper, were signatories to the five-point “firewall” letter, published in January 2001, that urged Premier Ralph Klein to seek greater autonomy for the province. Twenty years on, the current volume can be read as a fleshed-out version 2.0 of that missive.

As these contributors would have it, Alberta’s attempts to reach a better deal within Canada — captured by the phrase “The West wants in”— have failed. The province is worse off now than it was four decades ago, and it is time to seek a more independent relationship with the rest of the country; if that is not successful, Alberta should set in motion the formal secession process. Many of these writers are the same neo-liberal policy advocates who have shaped the agenda of the current government under Jason Kenney. Preston Manning, for example, chaired the Fair Deal Panel, which released its twenty-five recommendations in June 2020, and Jack M. Mintz, a co-editor, chaired the Economic Recovery Council, which provided advice for recuperation from the pandemic.

Manning’s opening chapter sets the tone for those that follow: Alberta is overtaxed and underrepresented in Ottawa. While it has transferred huge chunks of money over the past five decades to the rest of Canada, it lacks an adequate voice in Parliament, the courts, the public service, and other decision-making bodies. At the same time, it has been denied critical infrastructure for distributing its oil and gas. The so‑called Laurentian elite (from Quebec and Ontario) has consistently thwarted Alberta, leaving it three options: stay with Canada but in a new economic relationship that recognizes the province’s distinctiveness and the foundational role of natural resources; go it alone as an independent country; or join the United States. 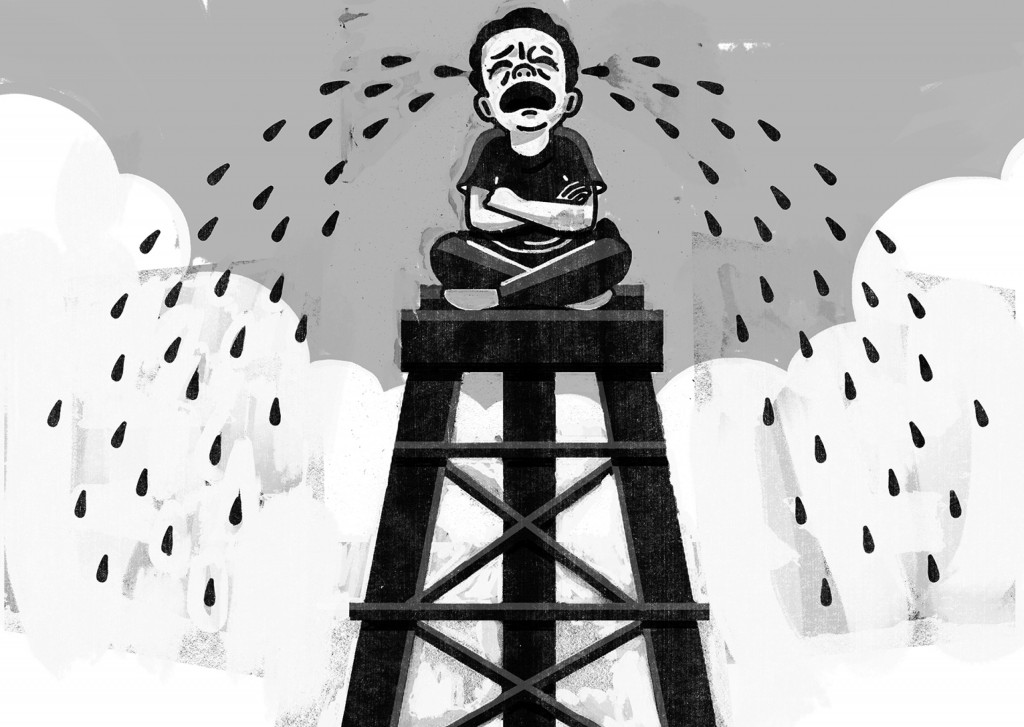 Tapping into some inconvenient truths.
Image by Pete Ryan

Mintz titles his chapter “Why Do Small Regions Secede from a Federation (Sometimes)?” He considers several “cases of federal conflict,” including Australia/­Western Australia, Malaysia/­Singapore, Norway/­Sweden, and Spain/­Catalonia. He draws five “lessons learned” from this overview: a wealthier region with limited political power must be protected from the national majority; fiscal transfers to poorer regions cause tensions if the richer region feels exploited; weak central institutions make devolution or separation more tenable; the lack of strong economic linkages leads to greater tensions; and separation can be peaceful if both parties are in agreement.

Elsewhere, the economist Robert Mansell analyzes the fiscal imbalances between Alberta and the rest of Canada from 1961 to 2018. The “substantial transfers from Alberta” during this time — $3,700 per person on average, and over $5,000 per person in most years after 1980 —“would appear to constitute the largest interregional transfer in Canadian history.” Later, the economists Herb Emery and Kent Fellows consider those fiscal transfers and the value of interprovincial trade; they conclude that Canada has much more to lose than Alberta does if the province separates.

In his chapter, “Secession and Constitution in Alberta,” Richard Albert, who teaches law at the University of Texas, outlines six steps to possibly leaving Canada: initiating the process, in which the Alberta government outlines its plans for a referendum; evaluating the question under the federal Clarity Act; voting, while ensuring the process is seen as independent, fair, and reflective of the will of Albertans; studying the outcome, including the size of a majority and the rate of voter turnout; negotiating terms with Ottawa, through what’s known as the 7/50 ­procedure; and constitutional amendment.

In “The Future of the Resource Sector,” the former energy executive Kelly Ogle argues that since Canada accounts for such a tiny portion of global petroleum production, aggressive reduction of oil sands activity would have negligible effects on climate change while damaging Alberta’s economy. The political scientist Barry Cooper, perhaps the most extreme voice in Moment of Truth, argues in “Challenges for Western Independence” that the deck is stacked: no legal path to an independent Alberta actually exists, so aggressive action may be required, perhaps even U.S. military assistance. “From the oil sands as a strategic North American petroleum reserve to the use of the third largest air base in the world at Cold Lake, Alberta,” he observes, “westerners certainly have military bargaining chips to offer the Americans.”

The University of Moncton’s Donald J. Savoie is something of a sympathetic eastern outlier in the collection. While reviewing the historical domination of Ontario and Quebec, he calls for national institutions — from Parliament and cabinet to the public service and the judiciary — to better represent regional economic interests. An example is Jim Carr’s recent appointment to cabinet as Justin Trudeau’s special representative for the Prairies. Such accommodation could forestall growing alienation in both the West and the East. Savoie writes,

Change can only come from two sources: from central Canadians who are able to see that Canada can only develop to its full economic potential if national institutions can better accommodate regional economic circumstances, and from Western and Atlantic Canadians joining forces to ensure that the country’s national institutions incorporate strong intrastate federalism requirements.

By and large, the authors here reject the federal government’s climate change policies, including emissions targets under the Paris Agreement, the carbon tax, Bill C‑69 (which they say blocks pipeline construction), and Bill C‑48 (which prohibits tanker traffic off the northern coast of British Columbia). In ways that echo the aftermath of Pierre Trudeau’s infamous National Energy Program, these policies have led to the exit of foreign-owned energy giants from the oil sands (Total and Shell), while at least fifteen other companies have shifted their investments outside of Canada since 2014.

In the final chapter, the three co-editors summarize what’s needed to undo the damage: a northern corridor for oil and gas pipelines; changes to the Supreme Court, including its composition, size, and how justices are appointed; an elected Senate; and provincial substitutes for many federal programs, including the Canada Pension Plan and the RCMP. Edmonton should also collect provincial income tax directly, exit federal cost-sharing programs, leave supply management for dairy and poultry products, and facilitate private health care. Then, following a referendum on equalization that’s slated for this fall, negotiations should be shaped by “autonomism,” by which the threat of separation could enhance Alberta’s position within Canada. “The autonomist option could be helpful preparation for some version of separatism if Alberta is forced to move in that direction,” the co-editors write. “In general, the more auto­nomous Alberta becomes, the easier it will be to contemplate full-fledged separation.”

On the whole, contributors to Moment of Truth largely ignore or downplay realities that inhibit or contradict their agenda. First, consider equalization. Back in July 2020, as the book was nearing publication, the University of Calgary economist Trevor Tombe pointed out in a CBC column that Alberta was on track to become a have‑not province for the first time in fifty-five years, thanks to the pandemic and the accompanying economic crisis (this conclusion was based on a report he co-authored with Robert Mansell and Mukesh Khanal). Traditionally, high average incomes and a young population have meant that higher income and consumption taxes flow from Alberta, which Ottawa then uses to offset lower revenues associated with more elderly populations elsewhere in Canada. But there’s nothing nefarious about this. “Federations allow us to pool risks,” Tombe wrote. “When a province’s economy is strong and its incomes are high, it will naturally contribute more than other provinces.”

Second, a major swath of the Alberta electorate — mainly from urban communities — does not support the direction advocated by these authors. According to multiple polls, support for Kenney’s United Conservative Party has plummeted since the May 2019 election. Other surveys have shown lukewarm support for separation, for scrapping the CPP, and for replacing the RCMP with a provincial police force.

“Alberta needs to find a way of working with other provincial governments and with Ottawa.”

Most critically, Moment of Truth largely sidesteps the climate crisis, through either old-style denialism or what the researcher Seth Klein calls the “new climate denialism”: saying one accepts climate scientists’ warnings while avoiding their public policy implications. As a whole, these authors seem willfully blind to the stark reality around the corner, as well as to what’s already occurring before their eyes: the loss of wildlife and Arctic ice, unprecedented natural disasters, even shifts in energy consumption. In 2019, the International Energy Agency forecast a future in which oil “demand growth is robust to 2025” but slows to a “crawl” after that. The intergovernmental organization anticipates demand for crude will fall from 97 million barrels per day in 2018 to just over 65 million barrels per day in 2040. High-cost Alberta bitumen would struggle more and more as global demand wanes.

Numerous global banks and investment funds, including Deutsche Bank, HSBC, and BlackRock, the world’s largest asset manager, are stepping away from Alberta’s oil sands. And any comfort Donald Trump’s administration may have offered the Kenney government has been quashed by Joe Biden, who has rejoined the Paris Agreement and cancelled Keystone XL.

Moment of Truth might have suggested ways the provincial government could assume a leadership role rather than reflexively continuing down dinosaur row. It might have proposed how Canada’s five biggest oil companies — all based in Calgary — could harness their know-how and adjust to a clean energy world. Instead, it simply sets a number of inconvenient truths aside.

In May 2020, Jason Kenney began slamming the “hypocrisy” of Norway’s sovereign wealth fund for pulling investments from the oil sands. Even as it continues to develop new oil fields, exclusively for export, Norway is widely regarded as a leader on domestic emissions reductions and carbon-free innovations. It has the world’s highest per capita ownership of electric vehicles, for example, which account for more than half of its domestic car market. It ranks eighth out of sixty-one countries in the latest Climate Change Performance Index (Canada is near the bottom, at fifty-eighth). Unlike Alberta, which squandered its mineral wealth on low taxes and corporate giveaways, Norway is using its fund — valued at over $1 trillion (U.S.) — to facilitate a meaningful transition.

The Kenney government and the Canadian fossil fuel industry generally dismiss the Norwegian approach. They continue to reject the climate science and demonize the Trudeau government. This position is misguided and dangerous. In order to navigate these precarious times, Alberta needs to find a way of working with other provincial governments and with Ottawa, instead of entertaining potential breakup scenarios. This is the actual truth that the authors of Moment of Truth ignore at their — and our — peril. The stakes could not be higher.

Bruce Campbell is a senior fellow with the Centre for Free Expression, at Ryerson University, and the former executive director of the Canadian Centre for Policy Alternatives.

Is it mere coincidence that two of the three editors of a book promoting Alberta’s possible union with the United States are U.S. citizens?