The Seventh Shot: On the Trail of Canada’s .22-Calibre Killer

Watching the Devil Dance: How a Spree Killer Slipped through the Cracks of the Criminal Justice System

The Biblical tale of Cain and Abel is the original true crime story. Murder ballads were once quite popular throughout Scandinavia and the British Isles. Victorian penny dreadfuls, with their grisly chronicles of wrongdoing, often sold millions of copies. Magazines from The New Yorker and Vanity Fair to True Detective, with its classic lurid covers, have long sated people’s appetite for deadly sins.

In 1966, Truman Capote struck gold with In Cold Blood, which details the gruesome murders of the Clutter family, outside of Holcomb, Kansas, in 1959. That “non-fiction novel” opened the floodgates even wider. Since then, countless bestsellers have followed, about the likes of Jeffrey Dahmer, Ted Bundy, and Charles Manson (Vincent Bugliosi’s Helter Skelter, from 1974, being the most successful of them all).

Of course, Hollywood has also mined the true crime vein. HBO’s The Jinx and I’ll Be Gone in the Dark and Netflix’s Night Stalker have enjoyed large audiences, as have feature films like The Boston Strangler and The Zodiac Killer. Charlize Theron won an Oscar for her portrayal of the serial killer Aileen Wuornos in Monster. But perhaps nothing has done more to expand the genre’s appeal in recent years than podcasting. Serial, which re-examines a single case over an entire season, helped lead the way back in 2014. Seven years later, Marie Claire magazine has just ranked its fifty-seven favourite true crime podcasts, explaining, “There are some things a Lifetime movie cannot capture.” 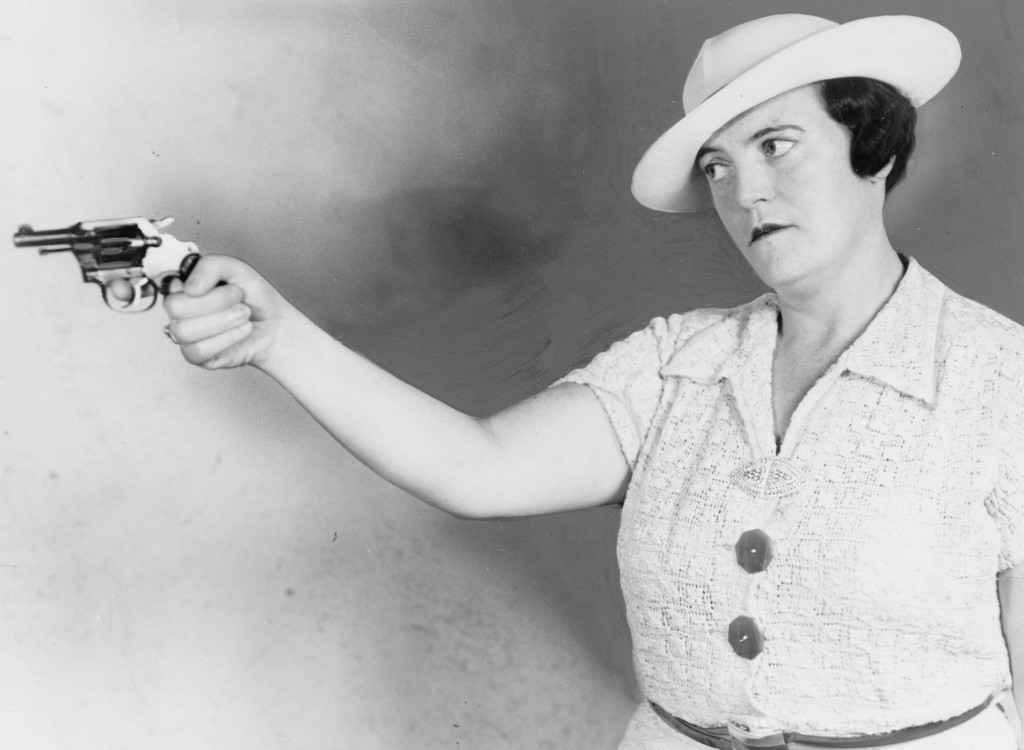 Okay, hand over all the details.
Image by New York World-Telegram and the Sun Newspaper Photograph Collection; Library of Congress

I’ve experienced the genre’s marketability first-hand, as a reader, watcher, and journalist. I was on staff at Maclean’s during the trial of Paul Bernardo, the serial rapist and killer who terrorized Scarborough, Ontario. From the time of his arrest, in February 1993, until well after his conviction, in September 1995, Bernardo was on our cover several times, as was his accomplice, Karla Homolka. There was never any question that the accounts of their misdeeds would do well on newsstands; we just knew that readers across the country wanted all the details.

“If it bleeds, it leads,” the adage goes. But what explains true crime’s deep-seated popularity? Does it speak to our inner Peeping Tom? Do we get a vicarious thrill from being present in our imaginations, witnessing what transpires from a very safe distance? Do we crave that little adrenaline rush we get when thinking that it could have happened to us?

However tantalizing for its entertainment value, true crime can also serve to bring genuine injustice to light. For a number of years, Robert Pickton preyed on marginalized women in British Columbia. Many of these women were involved in the sex trade or battled substance abuse. He was able to get away with it, in large part, because the authorities did not take their disappearances seriously. By writing about Pickton and his victims, Stevie Cameron and others showed how society — from law enforcement to social services and the justice system — too often dismisses those on the edges.

Done right, true crime can treat victims with respect and empathy; it can avoid sensationalism and make consumption of the genre a little less voyeuristic. Two new books do just this. Both offer detailed reports of horrific acts and provide insights into criminal motivations, as they trace the lives of infamous perpetrators, the impact of their crimes on their victims’ friends and families, and the successes and failures of the justice system in bringing them to account.

Ann Burke’s The Seventh Shot deals with the rapes and murders of two nurses, which took place north of Toronto in 1970 but remained unsolved until 2000. The killer proved elusive, in part, because he was a police officer himself and knew how to cover his tracks. The book reads like a procedural drama, as Burke highlights the importance of little details and dogged pursuits. And she shows how valuable luck can be for solving a case with few leads.

Burke’s title nods to the importance of luck and to what eventually helped authorities identify Ronald Glen West as the .22‑Calibre Killer. West shot his first victim seven times, which prompted one officer to ask, “Who shoots someone six times and then stops to reload and shoot a seventh?” Eventually, West’s gun — a nine-shot revolver — was found and helped answer the troubling question.

Burke, a former journalist and social worker, was drawn to the West case for a couple of reasons. For one, she attended high school with the killer in the early 1960s. “I felt a very personal and compelling call to document this story,” she writes, noting “the shocking crimes, the interminable wait for justice spanning nearly thirty years, and the actions of those who were to finally reveal the identity of ‘the ghost.’ ” This personal link was heightened when, as a social worker, she helped thwart another murder by another “homicidal cop.” These “strange parallels” inform her meticulous narrative.

“There was never any question that the accounts of their misdeeds would do well on newsstands.”

The Seventh Shot burrows into West’s personal life and criminal past, including a string of violent robberies. “I don’t leave witnesses,” he once told investigators. But Burke finds witnesses in the form of family members and ­colleagues who knew West, whom she remembers as “a rather odd young man who seemed particularly uncomfortable around women.” She thoughtfully profiles the officers who eventually solved the case — one of Canada’s oldest cold cases at the time — from their early careers to where they are now. As for her former classmate, he remains behind bars.

Will Toffan’s Watching the Devil Dance, meanwhile, tells the story of Matthew Charles Lamb and his June 1966 shooting spree in Windsor, Ontario, which left two people dead and one wounded. The description of his crime and his subsequent apprehension is riveting, but it is his trial and what transpired after his conviction that makes for a truly troubling story.

Lamb was acquitted of murder by reason of insanity, a verdict that saved him from the death penalty, on the books in Canada until 1976. Instead, he was sentenced, for an indefinite period, to the Oak Ridge Facility for the Criminally Insane, in Penetanguishene, Ontario. Six years later, he was released and joined the Rhodesian Light Infantry, where he served as a lance corporal until his death in combat in 1976.

Like Burke, Toffan has an association with the story he tells: he was next-door neighbours with one of Lamb’s victims, and he had talked to her as she left her house on the night of her murder. It’s something that has tormented him ever since: “With this book, I am going back to that first ghost that haunted me, to tell the whole story for the first time — now informed by modern understandings of criminal psychology.” Toffan combines his personal connection to his subject with his background as a historian and former RCMP officer. He draws upon numerous interviews with the killer’s family and acquaintances to produce a profile of a disturbed young man — one who seemed predestined to kill.

In detailing Lamb’s trial, Toffan betrays a slightly jaundiced view of psychiatry and its relationship to calculating criminals: “Law enforcement officers have long been familiar with the psychopath’s predictable antics and proven ability to con medical professionals,” he writes. “The psychopath’s objective is fairly simple: to portray himself as incapable of appreciating the nature of the crimes he commits in order to minimize punishment.” Toffan’s fellow officers used to describe this determination to confuse and manipulate as the “devil dance” (hence the book’s title). “According to his few friends,” Toffan continues, “Lamb learned the essentials of the devil dance at a much earlier age, mastering the manipulative verbal skills and hyper-physical displays of performance art at which the psychopath naturally excels.” Psychopath or not, Lamb ultimately received treatment at Oak Ridge that almost beggars belief.

In similar ways, The Seventh Shot and Watching the Devil Dance deal compassionately with those who were most traumatized by the loss of friends and family members. West’s victims had young children who grew up motherless, while Lamb’s targets had friends who witnessed the shootings and lived with survivors’ guilt for the rest of their lives. In both cases, the families had a nagging fear that the murderers would one day strike again. And that is perhaps the saddest and most compelling aspect of true crime stories, no matter what form they take: the gripping demonstration of how violence doesn’t end once a case is solved. It lives on, embedded in the psyches of the survivors.