Blue Sky Kingdom: An Epic Family Journey to the Heart of the Himalaya

In 2014, Bruce Kirkby set out with his family to live for three months at a Tibetan Buddhist monastery in the western Himalaya. Kirkby is a man who operates at extremes. He is an adventurer and photographer who crosses hot deserts by camel and cold mountains by horse; he is also a travel writer and the former host of the CBC’s short-lived version of No Opportunity Wasted.

Kirkby mines his many expedition experiences for corporate keynote addresses, mainly on the topics of grit and resilience. But the resilience he needed to properly support his own son, diagnosed with autism spectrum disorder, was being undermined by an addiction to his iPhone and social media feeds. He decided the best place to detox from technology — and to build stronger family ties — was in an isolated valley in northern India, far away from their home in the Rocky Mountain town of Kimberley, British Columbia. Since life is about the journey, not the destination, the Kirkbys eschewed air travel and made the Homeric trip over land and sea. In just two duffle bags, Bruce and his wife, Christine, along with their two sons, aged seven and three, packed “everything required to survive three months amongst the world’s highest peaks.” As an extra challenge, they invited along a sixteen-person television crew, which would film the whole trip for the Travel Channel.

The first third of Blue Sky Kingdom recounts the getting there. Starting out on two canoes lashed together, the family paddled down the Columbia River to Golden and took a train to Vancouver. They then boarded a cargo ship to Korea; headed through China, Tibet, and Nepal; and finally arrived at Karsha Gompa, a thousand-year-old monastery of the Gelug tradition. For the next three months, the Kirkbys stayed in the small guest room of a senior monk’s simple mud-brick home, witness to the daily lives of monks and villagers. The “abundance of time, stillness and attention” that the rural community afforded, a world away from the distractions of modern life, helped bring them clarity. Each day offered another bucolic and decidedly disconnected bonding experience: hiking, watching puja, taking a trip to a nearby village, helping local farmers thresh barley. When the iPad’s battery finally ran out, the boys discovered joy in a universal toy — the humble stick. At night, the family arranged themselves head-to-toe in their bedrolls and were lulled to sleep by the blowing winds. In a strange land, they found refuge in one another. 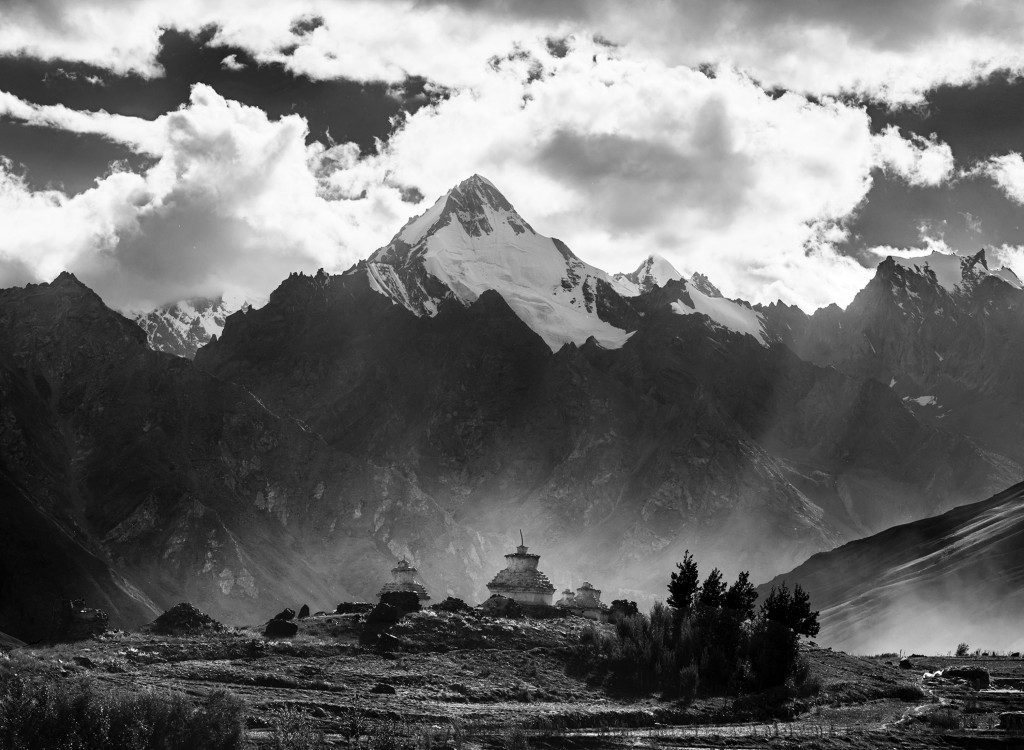 A world away from the distractions of modern life.
Image by Craig Lovell; Eagle Visions Photography; Alamy Stock Photo

Karsha Gompa clings to the cliffs along the Zanskar Valley, in Ladakh, the northernmost territory of India. The region was once part of the greater Tibetan Empire. Now it is hemmed in by lines of control, the tracings of past wars with Pakistan and China. Although remote, Ladakh is much easier to access than Tibet; many tourists visit to see how this “Little Tibet” continues its traditional culture. Despite his own temporary stay at the monastery, Kirkby scoffs at the bused‑in day trippers — with their expensive outdoor gear, stingy donations, and “insensitive use of cameras.” But he offers little more than cursory commentary on modernization, tourism, and Western notions of progress.

Kirkby and the camera-toting sightseers were not the first outsiders to visit Zanskar, of course. In early 1820, the Hungarian orientalist and father of modern Tibetology Alexander Csoma de Krös began an overland quest to compile the earliest Tibetan-English dictionary. He would spend sixteen months at Zarla Monastery — just up the valley from where the Kirkbys stayed — while learning Tibetan under the tutelage of a local lama. In the winter months, student and teacher took turns uncovering their hands to turn the pages of the canon. Csoma travelled under the moniker Secunder Beg (Alexander the Great) and was later picked up as a suspected spy by British authorities. This was during the buildup to the Great Game, the geopolitical competition between Russia and the Raj to control “the roof of the world.” It was also a time of worry for the German Romantics, who feared that the soul of Europe was being debased by the new “religion of progress.” In the face of modernism, they looked to the traditional cultures of Asia, funded expeditions and textual translations, and searched for spiritual succour.

Perhaps unintentionally, this is the tradition that Kirkby continues. Although his book touches on the history and culture of the region, too much of his research remains hidden away in his bibliography, which, admittedly, lists some of the classics of the field. With his photographer’s eye, Kirkby has a knack for describing scenery, and Blue Sky Kingdom includes some breathtaking images (complemented by highly detailed pencil sketches by Kirkby’s talented older son). But his formidable skills as an adventurer do not help him as a writer to manoeuvre through complex societal issues.

At one point, perched on a wind-shorn outcropping and viewing the dry valley floor, Kirkby muses on a new road below and the inevitable destruction of traditional life: “It doesn’t blend into the landscape the way a footpath can, giving way to rises and dips, gracefully following contours. Instead it ploughs straight ahead, an incongruous line in a world of curves.” While the journey is certainly a remarkable one, the book that details the impressive feat struggles with the cultural nuance of its location. In the end, Kirkby’s observations on creeping modernity are merely two-dimensional.