Picture it: 1960s Hollywood. The young, fresh-faced president of the Canadian Mae West fan club had just set foot in Los Angeles to meet his idol, befriend her, and become her personal assistant and all-round Agador Spartacus. Craig Eadie had seemingly done the impossible. He’d turned groupie-level infatuation into a real relationship. He’d left Toronto for the City of Angels, where he was brought under the wing of one of its most notorious icons. He needed a change of scene, a place where his talent for impersonation would thrive and his feminine side would be celebrated. And then — imagine — in sashayed Mae West, with an invitation to come up and see her sometime.

West was about to become a new mother — a drag mother, that is. Now picture a makeover montage, with wigs, dresses, jewels, where the star of I’m No Angel delights in turning her young protegé into a funhouse-mirror version of herself: brazen, sensual, and steeped in intrigue. Under her tutelage, Craig Eadie transformed into Craig Russell, who would become a legend in his own right. Before RuPaul brought drag to every suburban household in North America, Russell walked the mainstream drag tightrope. We might have been tuning in every Friday night to watch Craig Russell’s Drag Race if not for his self-sabotage.

There are many places in Brian Bradley’s meticulously researched and immensely readable biography that conjure up the now-classic Tyra Banks moment, when readers might find themselves screaming, “I was rooting for you! We were all rooting for you!” And it’s true: we do root for Russell. Throughout this account, from childhood trauma to tremendous talent, from the heartaches and disappointments to his marriage to his rock and number one fan, Lori, Outrageous Misfits delivers a Tinseltown fairy tale with a hefty dose of hard knocks. After all, in the immortal words of Mae, “Good girls go to heaven, but bad girls go everywhere.”

When Russell started out, “drag queen” wasn’t a common term. Later in his career, he actively shied away from it, as his artistry skewed toward masterful impressions rather than unique characterizations. (Bradley refers to him as a female impersonator or impressionist.) Whichever way he chose to identify, his singing and comedy, with his repertoire of more than thirty Hollywood dames, certainly make him a contender for the drag hall of fame. 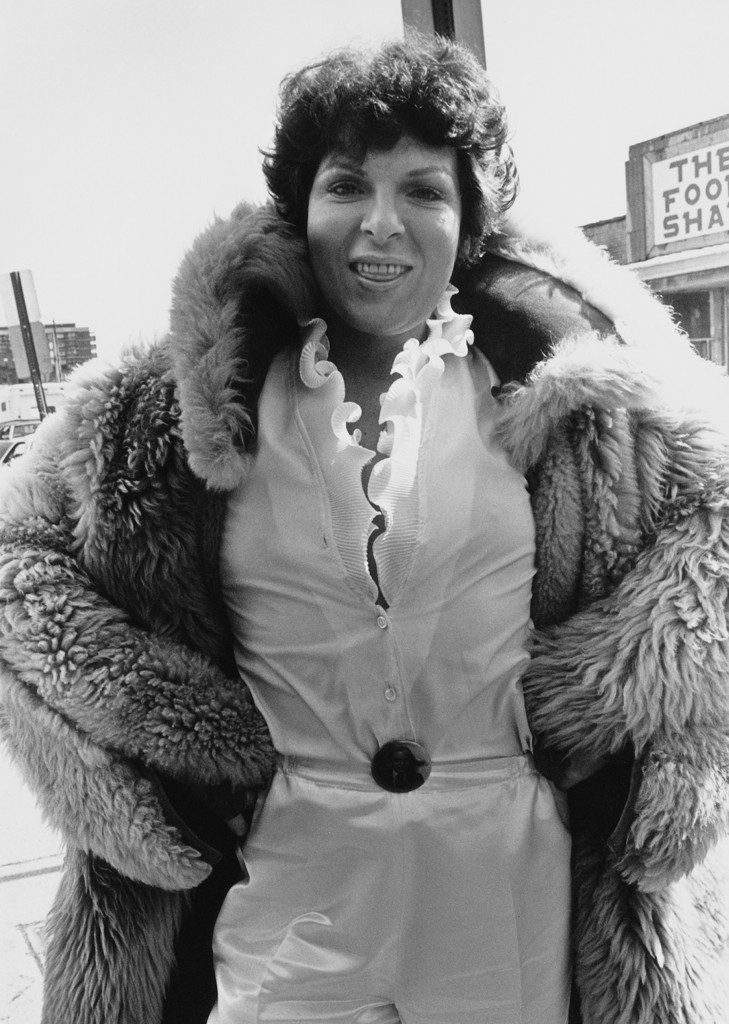 Something special, even magical.
Image by Barbara Alper, 1978; Getty Images

Back in Toronto, Russell’s star rose in the ’70s. With his act polished and his wigs coiffed, he delighted crowds at the clubs of Church and Wellesley as Carol Channing, Bette Davis, and, naturally, Mae West. Outrageous Misfits takes us on a gleeful walk through the gay village of yesteryear, before the fire at Club David’s and before even more condos replaced Zipperz. It was a time when the neighbourhood brushed up close, but not too close, to the straight downtown elite and served as a space where self-expression was key and drag ruled supreme.

For the price of admission and a watered-down vodka soda, plus a couple of bucks in tips, clubgoers could watch Russell bring his beloved broads to life night after night. Live vocals, glittering floor-length dresses, and immaculate impersonations were the staples of these shows, in contrast with the lip-synching familiar to modern audiences. In a period when the gay community was largely considered “out of sight, out of mind,” and when Pierre Trudeau’s remark “There’s no place for the state in the bedrooms of the nation” was still fresh, there was something special, even magical happening in the visibility of Craig Russell.

Many years after Russell’s reign, I had a regular gig at a little piano bar on the strip. Statlers, which closed its doors in 2018, was one of the last venues to focus on live music, transporting us back to a time of cabaret, to the moment when boundary-breaking acts like Russell’s were crossing over into public consciousness. In 1977, he starred in his first feature film, Outrageous!, which set up a typical straight woman and gay man trope: imagine Will & Grace, but Will is a female impersonator and Grace is a writer with mental health issues. The movie created buzz at Cannes and the Toronto Festival of Festivals and should sit firmly on the same cult classic shelf as Paris Is Burning, Pink Flamingos, and To Wong Foo, Thanks for Everything! Julie Newmar. Russell’s fame should have skyrocketed him to the same heights as Divine, named by People magazine the “Drag Queen of the Century.” Yet it didn’t. I’m embarrassed to admit that, before reading this book, I’d never heard of Outrageous!, despite being a devoted follower of this genre. The film’s failure to reach iconic status can be attributed partly to its distribution missteps, but the blame also lies with Russell — a man who could never quite get out of his own way.

As with any golden era, there comes a tipping point when the glory starts to fade. If Russell was a drag trailblazer in the ’70s, the following decade gave him pause. He was no longer the bright light in a relatively unknown subculture. Gay liberation was growing increasingly vocal in Canada and around the world. There were various riots and sit‑ins south of the border before “Toronto’s Stonewall,” in 1981, and activists like Marsha P. Johnson and Sylvia Rivera were breaking down societal misconceptions about gender. At a point when more gay voices were being heard, Russell’s drag, which was based on classic techniques and appealed to bourgeois, straight audiences, was falling flat. A Mae West act in the ’80s didn’t hold the weight of a Madonna performance. Funny how quickly the culture can shift from subversive to tame.

“He didn’t just play these women, he was them, pulling these personas from deep within.”

In ten short years, Russell went from being a big fish in a small pond to a big fish in a much larger pond — a position no diva wants to be in. He became increasingly erratic and more destructive, and Outrageous Misfits sparkles as a performer’s lament. “They don’t love me,” Russell once told a friend. “They love my characters.” What is seen onstage is a carefully calculated, practised, polished version of a performer. Beyoncé has Sasha Fierce, and Craig Russell had his arsenal of leading ladies. But he didn’t just play these women, he was them, pulling these personas from deep within. And he would lose himself in them too. Of course, substance abuse played a tragic part in Russell’s downfall, as he increasingly struggled with his mental health and turned to self-medicating with cocaine. He soon found himself on a path similar to the ­offstage life of Judy Garland, around whom he had built one of his finest characterizations.

This was not the end of the show. Waiting in the wings, as the spotlight beamed down on Russell, was Lori Russell Eadie. Where Russell is the face of the story, Lori is the heart. Where he shines, she supports; where he falters, she remains strong. They were two people who made each other whole, two “square pegs in a world of round holes.” As Lori said, “Nobody’s perfect. But we were perfect together.”

Lori Jenkins also grew up in Toronto and had a similar desire to break free from her old life — in her case, a physically and emotionally abusive parent. She first heard about Russell while she was still in high school, where she had stitched a tapestry of him, titled All about Craig. The poor girl was smitten, and she carefully planned a way to meet him. (Her pursuit was reminiscent of the way Russell had courted Mae West all those years before.) Lori was intense, she was persistent, and her efforts were ultimately rewarded when Russell took her on as his dresser and assistant. As Bradley’s cozy commentary acknowledges, “Craig loved to be loved.”

They were married in 1982 and remained together until Russell’s death, in 1990, of a stroke related to complications from AIDS — a part of the story that Bradley, a journalist at the Toronto Star, handles with the utmost respect and care. The pair didn’t live together for much of this time, and Russell would refer to himself and Lori casually as “just legal friends.” His sexuality was complicated and nonconformist. He had relationships with men and women, some serious, some casual. There was also a night with his Toronto roommate that gave him a daughter, Allison. But then his wife’s sexual preferences were a mystery too. Her family had assumed she was gay and had even given her a cake shaped like breasts for her sixteenth birthday. Lori never actually came out. It’s fitting that these two individuals, whom everyone else was trying to figure out, would find common ground with each other. Where Craig embraced a love of glamour and sequins, Lori cultivated a more androgynous look. As such, they made an unlikely set: a p­eacock and his hen.

The idea of a chosen family, a concept so important to the wider LGBTQ community, is central to the book. Craig and Lori’s connection was enigmatic and unknowable, and that’s the beauty of it. To explore their relationship is to dive headfirst into preconceived notions of what it means to be husband and wife and to emerge without any answers. Perhaps only this: there’s no such thing as one-size-fits-all.

As RuPaul famously says, reading is fundamental. In a world that is becoming ever more drag hungry, there’s an important place for Outrageous Misfits. If we are to truly appreciate the acts of today, we must learn more about the performances of the past, the forefathers and foremothers who paved the way for current gender expression. Familiar faces such as Carlotta Carlisle, Allysin Chaynes, and the Canadian legend Michelle DuBarry dot the landscape of the text, making it a homage to the working queens of today as well as a history.

“I believe that the desire to write a book, make a record, paint something beautiful or star in a film, is the desire for immortality,” Craig Russell said. “None of us want to get lost in that big world out there.” There is an immortality to his drag, and his contribution to the art of gender performance cannot be denied; nor can Lori’s unwavering support of the community. Outrageous Misfits gives the “king of queens” and his “number one” the credit they deserve. I’ll leave it to Mae West to take us home: “You only live once, but if you do it right, once is enough.” Craig and Lori: they did it right.

Leah Allyce Canali is a singer, songwriter, and producer, often to be found in Toronto’s Village.