Owls of the Eastern Ice: A Quest to Find and Save the World’s Largest Owl

Each spring, the birds return to nest at Oak Hammock Marsh, twenty kilometres north of Winnipeg. The first Canada goose usually shows up in March (there’s a contest for spotting it) and then thousands follow. They take over the wetlands, pair up, manage their offspring. In the fall, they’re loud and communal, making migration plans. But in the spring, they’re less social, keeping to themselves before heading even farther north, in some cases all the way up to Churchill.

It was dead quiet the night my wife and I were at Oak Hammock Marsh. As we drove back to the highway, windows open, a huge white bird suddenly flew through the beam of our headlights without making a sound. Not a goose. We figured an owl, like in Harry Potter (we’re not birders, clearly). What struck me most beyond its size was the silence, even as it flapped away.

This is evolution. The flight feathers of an owl are fringed and comb-like so that they displace the air before it reaches the wings. The effect is pure physics: the arrangement acts to muffle the sound. The result is practical: the quiet hunter catches the mouse. This fact turns up like a narrative gold coin in Owls of the Eastern Ice: A Quest to Find and Save the World’s Largest Owl by Jonathan C. Slaght, who reports that the bird’s characteristically round face is likewise the result of natural selection: it helps channel the faintest sound to the ears. Acoustics are everything for owls. They’re built to hear the slightest movement: built to kill without alarming their prey. 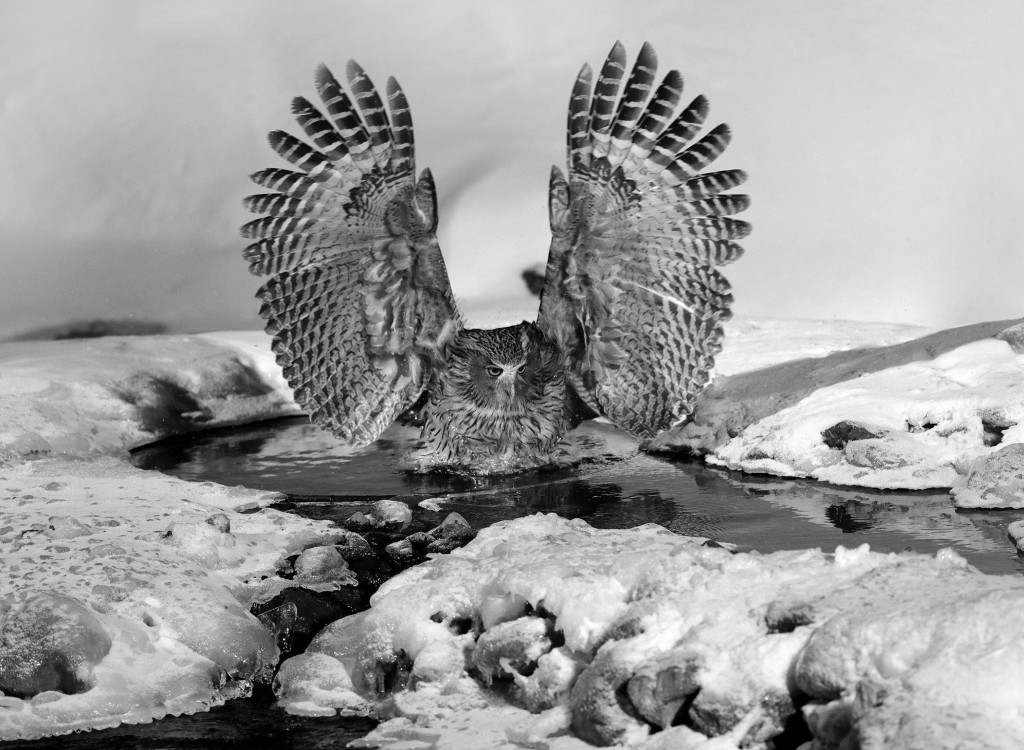 Who goes there?
Image by Ondrej Prosicky; Alamy Stock Photo

At least that’s the case for your run-of-the-mill Oak Hammock Marsh snowy owl. Slaght’s book is about a different, much rarer bird, the Blakiston’s fish owl, found in Russia’s Far East, an animal with no interest (or evolutionary advantage) in keeping itself quiet, since its prey is underwater. The fish owl eats salmon, so it can make as much racket as it wants. The biggest member of the parliament of owls, this is an odd-looking raptor, with a sharp face, massive eyebrows, and long dark feathers that bring to mind, Slaght points out, one of Jim Henson’s more bizarre Muppets. Slaght is an American wildlife biologist on a quest to track down, tag, and study the rare bird for his doctoral thesis. The result is an adventure tale about how, when it comes to human efforts to control and categorize the natural world, even with the best of intentions, nature always refuses to cooperate.

Owls of the Eastern Ice is obliquely part of a larger genre: the bird-as-metaphor-for-something-bigger book. A few years ago, the English author Helen Macdonald had a bestseller in H Is for Hawk, a richly written narrative about the year she spent training a northern goshawk — but it’s really about how she came to terms with the death of her father. Her follow‑up, Vesper Flights, is a collection of like-minded essays about birds and the natural world, and about how we (with Helen Macdonald as our stand‑in) make sense of the bigger issues of how we live. Which is fine. But what carries both Owls of the Eastern Ice and Vesper Flights is the details, the gold coins, like the reason for the owl’s round face. The books succeed on sharp observation more than on deep reflection.

In 1967, the English author J. A. Baker helped launch this bird-as-metaphor business with The Peregrine, which the filmmaker Werner Herzog credits as a cinematic ur-text: “In a way, it’s almost like a transubstantiation, like in ­religion, where the observer becomes almost the object — in this case the falcon — he observes.” Put another way, The Peregrine is about obsession. Baker tracked his subject daily, from October to April, for reasons he never fully explains. The reader is left to wonder, What is this all a substitute for? What’s he hiding or escaping from? Is it, as the wilderness writer Robert Macfarlane has written, an “act of self-destruction,” an attempt to run away from death? Follow your mood to the existential if you like, but Baker’s book is a masterpiece of observation.

Likewise, Macdonald’s best essays in Vesper Flights are about discovery — not so much about self-discovery as about the world outside. The one called “High‑Rise” is full of surprises. What is the nature of wildlife in Manhattan, she asks, above the skyscrapers and round-the-clock lights and noise? Surely it’s limited to surly pigeons, with a gull or two on a diet of cold french fries. “But like the ocean,” she discovers, “this is a vast habitat full of life — bats and birds, flying insects, spiders, windblown seeds, microbes, drifting spores.” She compares New York’s iconic buildings to “machines that work like deep-sea submersibles, transporting us to inaccessible realms we cannot otherwise explore.” It’s a striking image: in the city, one goes up, very high up, to find the wild ecosystem. It’s there. You just can’t see it from the street.

Researchers around the world use radar to study high-altitude movements of birds and insects. In England, they’ve determined that more than 7.5 billion bugs can pass over a square mile of farmland in a month, amounting to 5,500 pounds of biomass. But the numbers and density of those passing over New York are even higher. It is, after all, a gateway to North America: “The tallest buildings, like the Empire State, One World Trade Center and other new super-towers, project into airspace that birds have used for millennia. The city lies on the Atlantic Flyway, the route used by hundreds of millions of birds to fly north every spring to their breeding grounds and back again in the fall.” Up high, on the roof of a skyscraper, “the distinction between city and countryside has little or no meaning at all.” Depending on the winds, “birds, bats and migrant dragonflies all feed on rich concentrations of insects . . . just as fish swarm to feed where currents congregate plankton in the ocean.”

“When it comes to human efforts to control the natural world, nature always refuses to cooperate.”

With patience, Macdonald spots three pairs of black-crowned night herons, birds she’s seen only on rural lakes and ponds. Her guide, an ornithologist from Cornell University, uses a smartphone to study radar patterns out of Fort Dix, New Jersey. The system is so sensitive that it can detect a single bumblebee fifty kilometres away, and on a “big night,” it reveals flocks, too far away to see in the dark: “You’re talking about one thousand to two thousand birds per cubic mile potentially, which is almost as dense as it gets,” the ornithologist explains.

Slaght has more limited technology in Owls of the Eastern Ice, but he has human ingenuity and help from two Russian stalkers who lead him in endless ice and snow past logging camps and traplines in search of a breeding pair of fish owls to trap and tag. On a village road, outside of Maksimovka, they encounter a radon hot spring, below a looming Orthodox cross. There are no owls here but rather a lone drunken, naked man taking a soak in the radioactive waters. “Who the bloody hell are you guys?” he calls out, as he stumbles on the rocks. “Ornithologists,” they call back, by way of explanation. Struggling into a pair of boxer shorts, the man decides this makes enough sense in the middle of nowhere and, realizing that Slaght’s driver is from his own hometown, embraces them.

It’s hardly a spoiler to reveal that they do eventually find fish owls, but only with great effort. Along the way they meet up with more drunken Russians in the bush, who are there not to preserve nature but to cut it down, trap it, fish it, trade it, which Slaght doesn’t mind in moderation. People need to survive too, but some balance is in order.

Both Owls of the Eastern Ice and Vesper Flights follow grander themes: the fish owl is in danger of disappearing thanks to development and logging. Slaght is in a race to find them to protect them. And Macdonald makes it clear that bird migration over urban centres, however remarkable, is fraught with danger. “We cherish our cities for their appearance at night,” she says, of the bright lights of the Big Apple, “but it takes a terrible toll on migrating songbirds: you can find them dead or exhausted at the foot of high-rise buildings all over America.” More than 100,000 of these warblers die each year in New York alone.

In the end, detail adds up to a mission: To pay attention, not so much to ourselves (there’s an epidemic of solipsism, and we can all afford to take a break from it) but to everything else. To see nature not as something separate but as continuous and bigger than us — just like the gaggles of geese at Oak Hammock Marsh. It’s nature’s planet; we’re just wrecking it. That’s a take-away from Slaght as well as from Macdonald, who reminds us that “we are living in an exquisitely complicated world that is not all about us.”