In his 2007 book, A Secular Age, the philosopher Charles Taylor drew a distinction between pre-modern and modern people as porous versus buffered. Pre-modern people lived in an “enchanted” society where spirits and supernatural forces could cross over into our material plane. Individuals consequently believed in prayer, superstitions, alchemy, and talismanic objects that would protect them from evil entities.

Now, in our modern age, there is a firmer boundary between our selves and these forces. Our concerns are more for tangible threats such as disease and infection, which can be delineated and managed through science. (This has not stopped Internet conspiracy theorists from indulging in their own flights of fancy.) However, by cutting ourselves off from the demonic, we are also cutting ourselves off from the divine. What sort of angst and nihilism would be born of the complete death of God and the supernatural? Is a world of rigid materialism one we want to live in? A place where trees, water, and rock, because they do not think, therefore are not? Reducing the earth to crude matter seems to strip it of its vibrancy, of its inherent value. Nature without a sense of its own vitality becomes merely resources waiting to be exploited. As Pascal laments, “The eternal silence of these infinite spaces frightens me.”

The Baylor University professor Alan Jacobs argued that this is the precise itch that fantasy scratches. In his essay “Fantasy and the Buffered Self,” Jacobs wrote that speculative fiction “is an instrument by which the late modern self strives to avail itself of the unpredictable excitements of the porous self while retaining its protective buffers.” In other words, fantasy gives readers a pre-modern cake while letting them eat it from the safety of our current time. Works such as The Lord of the Rings, A Game of Thrones, The Chronicles of Narnia, and the Harry Potter series transport readers to enchanted worlds that feel spontaneous and mystical, without the baggage of inquisitions and draconian prejudices. How much these problems have really gone away, though, is a matter of debate. 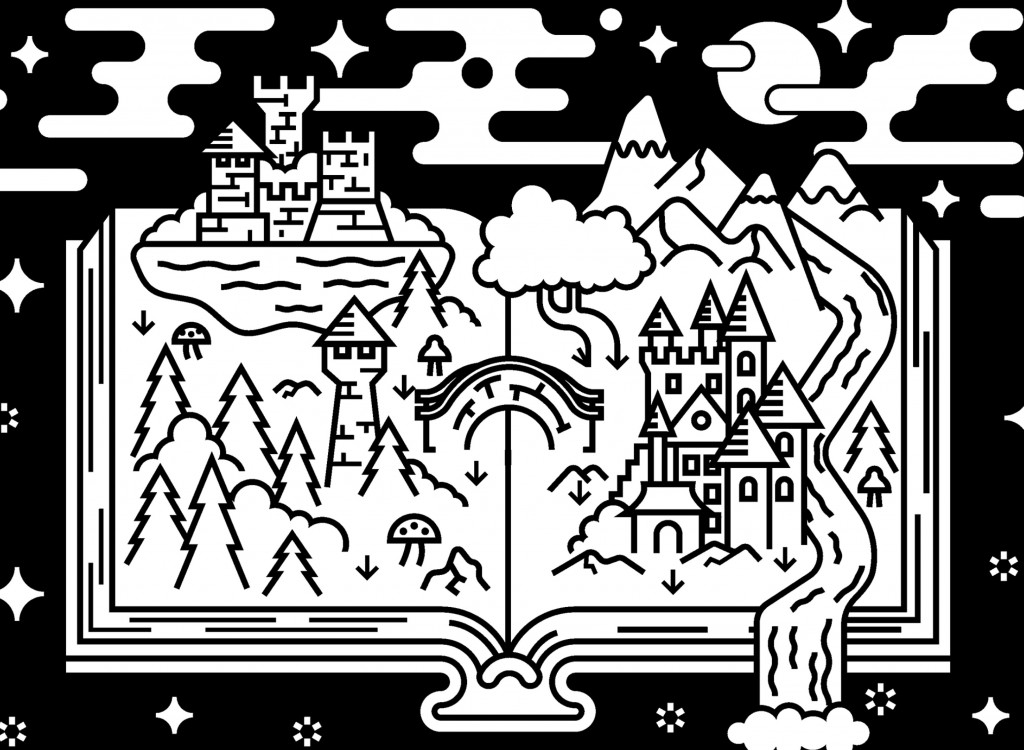 To fill pages with lore and storytelling.
Image by Alex Macaskill

The job of fantasy writers, then, is to create a setting where magic is real, to tailor an ontology specific to the story. The genre bifurcates into various subgenres. The Lord of the Rings is considered high fantasy because it is set in an entirely fictional realm with its own magic ­system — one that does not obey our laws of science. The attraction of high fantasy is that it fully immerses the reader in a world of heroes, gods, and titans: as Northrop Frye described in The Educated Imagination, “a world of powers and passions and moments of ecstasy far greater than anything we meet outside the imagination.” These imagined locales provide the author with a rich opportunity to create societies and metaphysical systems out of whole cloth. Tolkien called this “mythopoeic” writing, where he was creating his own unique mythology. (He didn’t stop at characters and plots: he created maps, languages, even a cosmology.)

By contrast, Harry Potter is a portal fantasy, where the protagonist journeys from our familiar, buffered reality to a parallel, magical existence. This approach allows readers an anchor point to situate themselves in relation to the magical realm and also highlights the disparity between the two. In the real world, Harry’s true self is repressed by his abusive aunt and uncle, but in the fantasy world he’s able to live an authentic life.

And then someone like the iconic Guy Gavriel Kay synthesizes fantasy with historical fiction, situating his novels in specific periods while taking advantage of the genre’s tropes. For example, Tigana is set in the fictional Peninsula of the Palm, inspired by Renaissance Italy, and draws upon the internecine battles between competing provinces and regions. He is able to challenge historicism by highlighting the inherently subjective nature of storytelling.

These unique mythological elements are categorized as lore, which is the soil from which story sprouts. And herein lies the challenge: how to balance lore with storytelling. Lore is not story. The task for authors is to take this raw material and fashion it into conflict, character arcs, and thematic exploration. As the video game writer and designer Matthew Colville says, “The work you did on your world, you did that work for you. And no one is going to care about it unless you can contextualize it dramatically. That’s the hard work.” The audience does not owe the creators interest in whatever rich backstory they have conjured for their settings. Readers want what they always want: narrative, character, conflict — the muscle and sinew of all storytelling. In that regard, fantasy is not unique, but this is where many of its authors go astray — they mistake lore for storytelling. Whether it’s from falling in love with their own mythos or from not trusting the reader to intuit backstory, a work fails when it collapses into exposition dumps that overwhelm the progression of the plot. Explanation is not engagement. The Force is an intriguing concept, but audiences fell in love with Star Wars because of Luke Skywalker and Darth Vader.

Timothy S. Boucher’s The Lost Direction is a new arrival in the field of Canadian fantasy. Boucher’s novel concerns a mysterious continent known as Quatria, which can be accessed only through the fifth direction, neither north, south, east, or west. It is the first volume in a series called The Lost Books of Quatria, published by Lost Books, an indie blockchain publisher in Quebec. Perhaps ironically, considering the premise and the name, the pandemic disrupted the title’s distribution when it was released early last year. As a result, it was stranded on distant shores for a time.

Boucher’s conceit is that these volumes are compiled from discovered manuscripts that detail accounts of visitors to an enigmatic, magical continent. (Remnants of the ancient seafaring civilization may be buried beneath the Antarctic ice.) Boucher is thus making a move similar to Kay’s, exploring the grey area of subjectivity and invention inherent to storytelling. The Lost Direction centres on Benda, a fisherman who haplessly arrives at Quatria while fleeing a storm. Benda learns about Quatrian hist­ory and comes to love the place and its people. However, he must journey home to his own continent, Kremel, to get back to his wife and son.

The book progresses episodically, as Benda encounters new characters in new lands, from medieval-style cities to castles atop mountains, and dark, dangerous forests. These characters also share lore — a lot of lore. Here is a typical passage: “All who commerced with Abdazon became themselves wealthy too, from Hundredth to Sheb (formerly a small fishing village — like so many in Quatria — which thereafter became a hub of sea-faring mariners), on up through the Threx Gate (the only other land passage to the upper level of the Cyrcic Cleft), to the city of Threx itself, which retained still old ties with Buorth across the Far Sea.”

This certainly seems like a great setting for a story to take place, but Boucher never gets out of his own way. So much time and effort is spent explaining the histories of these various civilizations and the tales of their conflicts and political milieus that the novel never settles into something resembling a compelling story. It reads instead like a textbook. The same passage continues with more exposition: “Abdazon, born of the House of Sorrow, at the Place of the Weeping Waters, had transmuted these tears into life-giving water which flowed outwards into its many tributaries. And the Hypogeum was contiguous with the Land of Men again for the first time since the Fall of Ederron, cast into the sea.” Boucher is in gross violation of a classic, albeit overused and oversimplified, maxim: Show, don’t tell. In order to enchant, the author must engage, not explicate.

Late in the story, Benda meets the novel’s arguably most memorable character, Tob Gobble, a sentient flute-playing potato. After a welcome moment of fun and engaging back and forth — something sorely missing from the rest of the narrative — Tob announces, “To understand my story, you must first know the story of my people.” Benda then “groaned inwardly, but did not let his new friend know that he was tired of tales.” It’s a good summary of how the reader feels.

Fantasy devotees have long endured haughty dismissal of the genre as too commercial, mere escapism, or childish make-believe. But these works re‑enchant a world that is in danger of being reduced to dull materialism. Authors can create rich playgrounds for thematic exploration and characterization within these imagined settings. But they owe their readers the hard work of crafting their lore into an absorbing story. Anything less is self-indulgent daydreaming.

Thank you for publishing the excellent review of Timothy S. Boucher’s The Lost Direction. It is encouraging to see a respectful discussion of science fiction, fantasy, and speculative fiction (and their myriad of subgenres) gracing your pages.

As someone who has used fantasy many times as an escape from life, when it felt like more than I could handle, I agree with Brad Dunne’s argument that fantasy can be a way for us to cross through a liminal space into worlds where magic is ever present and real. Although I would never want to downplay the positive role the genre plays as a form of escapism, I feel that viewing it solely through its ability to let us explore other...