Nothing the Same, Everything Haunted: The Ballad of Motl the Cowboy

The town of Radebeul, a suburb of Dresden, is perhaps best known as the home of the Karl May Museum. May, who died in 1912, wrote adventure tales of the American West, potboilers about the Apache chief Winnetou and his German friend Old Shatterhand — a kind of Teutonic Lone Ranger. His seventy books have sold over 200 million copies. From these tales, an “Indianer” sub­culture grew that still persists. In Bad Segeberg, in the north, a Karl May Festival gives fans the chance to play the cowboys and Indians game — complete with the Pony Express, the sheriff’s office, and the saloon. Kids in face paint sit in teepees or pan for gold. Like Wagner, May is a cultural icon.

Hitler was a fan. “On his bookshelf there are political and government publications, brochures and books about health and breeding German shepherds,” a 1933 newspaper report claimed. “And then — listen up, German boys! — a series of books by — Karl May!” The Führer spoke, with admiration, of how white Americans had “gunned down the millions of Redskins to a few hundred thousand.” He saw the Western colonizers as a model for creating Lebensraum, or “living space,” on his own frontier: the trick was to wipe out those already there. In a 2012 piece for The New Yorker, Rivka Galchen suggested that the shoot‑’em‑up shows at the Karl May Festival tap into fascist national sentiments or even act as a “working through of the trauma of the Nuremberg trials.”

Somewhere in here is what Gary Barwin calls “the delirious overreaching humour of tragedy.” His latest novel, Nothing the Same, Everything Haunted: The Ballad of Motl the Cowboy, is the deepest of black comedies, written as a cross between a grandfather’s embellished account of the Holocaust, the Yiddish tales of Sholem Aleichem, and a May Western. It’s a high-wire act. Barwin takes risks, most of which he pulls off. When he succeeds, it’s due in part to that ironclad rule of trauma comedy: no jokes unless you have a blood connection to the victims. (Barwin was born in Northern Ireland to South African parents of Ashkenazi descent; he now lives in Hamilton, Ontario.) 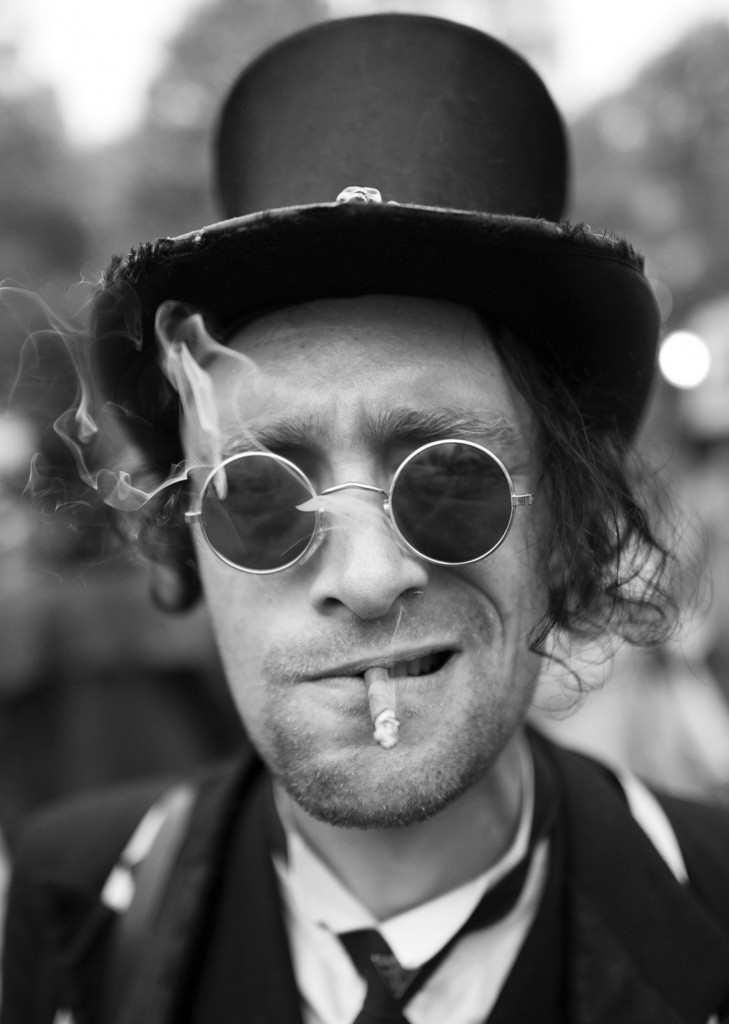 So he offers up the character Motl, a middle-aged man who lives with his mother, Gitl. The setting is Lithuania in 1941, and the pair have a quest before them: to retrieve Motl’s testicles, which were shot off in the Swiss Alps during the First World War and are presumed safely preserved in the ice. Meanwhile, he has a whole new war to contend with, as Nazi soldiers and collaborators are busy corralling and shooting Lithuanian Jews. From a pile of burning books, Motl saves a copy of May’s Mutterliebe (Motherly love). “You can burn a book or a library,” he thinks, “but to really destroy a story you have to destroy the language and its people.”

Motl is what in Yiddish is called a schlemiel: a sympathetic fool caught up in a fantasy. In this case, the dream is “the life of the cowboy.” Nothing, Motl says, “is impossible when it’s an illusion,” including survival. It’s up to Barwin to reveal how his protagonist discovers, over time, that he has more in common with the “Indianer” than he does with the gunslingers — that he’s more Winnetou than Old Shatterhand.

Nothing the Same, Everything Haunted is also a road story. With a horse named Theodor Herzl, Motl and his mother embark on their journey to escape terror and find his lost testes. In answer to the plan to wipe out his race, Motl will make a family: “While Nazis obliterated, he would create.” As they ride, he continues to dream, the scenes in his head always preferable to the ones in front of him: “Motl strode forward, his chest pushed out like a rooster’s, his two hands resting on the pearl-handled six-shooters given to him in gratitude after he perforated a scoundrel.”

The travellers reach a rutted wagon track and come upon a man carving a stick. “What are you making?” Motl asks. “A smaller stick,” the man answers. “We’re poor. It’s entertainment.” So the story goes, history as told through jokes, with alternating episodes of startling violence. There’s a moment when a man with an accordion climbs atop a pile of dead Jews, who were beaten to death with iron bars, and begins to play the Lithuanian national anthem. It’s a dark scene made darker by a quick Google search: true story, this happened in Kovno in July 1941. Barwin didn’t need to invent it, which is his point. For what purpose did God include the accordion, Motl asks himself.

In a frantic encounter with soldiers, Motl’s mother disappears, but soon enough he meets up with a young woman, Esther, who emerges as a love interest (with limitations, given Motl’s deficiencies). She becomes co-choreographer of a bizarre mission to deliver certain papers, which may save scores of lives, to Heinrich Himmler in Berlin. The pair pose as Karaites, members of a medieval Jewish sect that the Nazis determined to be just Muslim enough to escape massacre (a bureaucratic nicety that works in Motl and Esther’s favour; a historical fact that sheds light on the absurd arbitrariness of Nazi policy). Guess what — hijinks ensue. But it works.

How? The style is madcap, and there are too many puns: “And then the ‘blintz’‑krieg.” The whole tale operates at such a high pitch that it becomes mildly exhausting. And still, between fabulism and real-world tragedy, the light gets through. The Greeks knew how to pull this off, as did Sholem Aleichem in the Tevye stories (on which Fiddler on the Roof is based). Aleichem’s was Yiddish comedy, shtetl humour. He also had a character named Motl, a schlemiel, plus over-the-top colloquial scripture about a missing God and the need to create one in His place. This is Barwin’s style too:

The yellow sun climbed and fell, men were hung, homesteads were burned, men drank, fought on empty main streets, shot each other through the back or between the buttons, spared each other, helped each other, found love then lost it, while others sought a Hebrew God who thought it no longer possible to write His poetry in these times and gazed instead silently into His corned beef in some transubstantial cosmic cookhouse.

Any work that successfully wrong-foots you on your own complacency, when it comes to what you think you know about war and trauma, is vital, no matter how the story is told.