By and large, women’s coming-of-age ­narratives used to follow self-improving, redemptive arcs, but they have taken a darker turn in recent years. “I’ve come to believe one can take the sentimental temperature of a cultural moment by looking at its novels’ heroines,” wrote Stephanie Danler for the New York Times in 2019. And the tone of this latest breed of books is “a rebellion cut through with apathy.” In response to our hyper-digital, hyper-corporate, hyper-unjust reality, these protagonists have become “gloriously self-destructive” and “essentially alienated,” inching their way toward new and disturbing resolutions.

Two new novels are part of this rebellious turn: Marlowe Granados’s Happy Hour and Marie-Sissi LaBrèche’s Borderline (published in French in 2000 and translated by Melissa Bull last year). Both chart the course of world-weary women in their twenties — one with insouciance, the other with dark rage. Each has a very different take on youthful disaffection.

Isa Epley, Happy Hour ’s precociously self-assured narrator, arrives in New York in May 2013 with little more than her most cherished fashions and an eye for droll observations. She is joined by Gala Novak, her somewhat less worldly best friend (it is only Gala’s second time on a plane). Over the course of one sultry summer, the pair scrape by on a series of uninspiring jobs — selling clothes from a market stall, filling seats for a network television show — to fund their nighttime adventures with various actors, artists, writers, models, and aristocratic Brits with houses in the Hamptons. The business of going out, Isa tells us, is like “fieldwork.” She documents her findings in her not so reliable diary, which gives the novel its narrative form.

“At the end of the day, I want to learn!” Isa declares, before picking up a volume of essays on cruelty. After reading it, she remarks, “I would really like to ask an expert about why this is worth my time.” Unlike her friend Daisy —“a real ingénue”— Isa knows better than to believe in things like moral fibre, “which simply means a variety of fears instilled in you when you’re young enough to be scared.” She remains steadfastly unimpressed by most of her acquaintances, with a pointed disregard for those in the bloviating professions: “Gala had been talking to, of all people, a fiction writer.” The worst offenders are straight men, and, not incidentally, the girls don’t really care so long as their dinner companions pick up the tab (which, Isa notes, is something of a concern with those writers). Soon it becomes clear that Happy Hour is not about what its protagonist has to learn in New York; rather it’s about just how much she already knows. 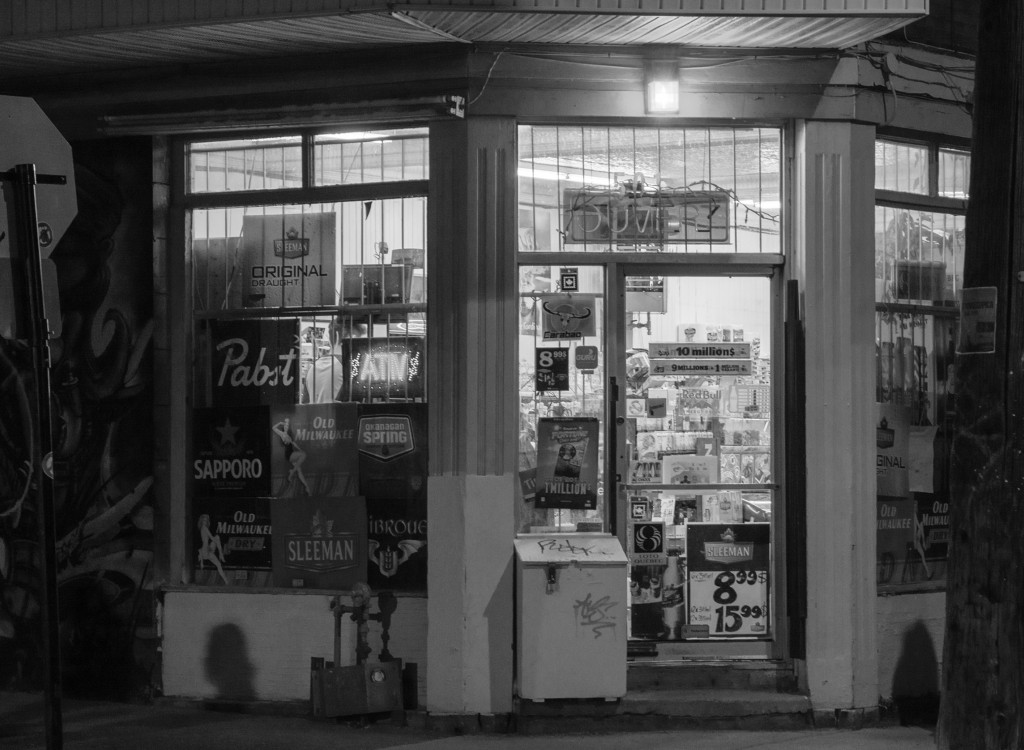 With much that’s funny and flagrant inside.
Image by Caribb; Flickr

Last year, Editorial Magazine described Happy Hour as “a bildungsroman for and by the party girl.” Granados’s literary influences are a throwback: she has cited Anita Loos, for example, the author of Gentlemen Prefer Blondes, the comic novel from 1925. And Happy Hour ’s lighter tone does seem to belong to another time. Isa and Gala are like modern-day flappers, for whom glamour and fun are as serious as any other pursuit. Not everyone agrees. The pair’s lack of professional ambition flummoxes the city’s social climbers, a reaction Granados plays on to hilarious effect. In one of the funniest scenes, the two friends attend a photography exhibition where they are repeatedly asked what they are doing in the city. When Gala responds, with no hesitation, that they are doing “absolutely nothing,” their interlocutors are unsatisfied, until Isa steps in: “No one seemed to understand what Gala was saying, and I thought perhaps she wasn’t enunciating to their liking. I know she sometimes warbles. So I repeated emphatically, ‘Nothing! Nothing at all!’” It’s certainly a refreshing take.

It’s hard not to warm to a story with such good intentions. Like Granados, Isa is Pinay and Salvadoreña, and she’s a heroine who would much rather talk about Escada and oysters than about trauma or displacement (very little space is given to reflections on her “heritage”). When Isa bats away the occasional microaggression, she decides exactly how or if she will engage with the terms of her rationalization. The literary marketplace too often expects a dissection of othering from its writers of colour. Happy Hour refuses to yield to that imperative, and it’s the better for it. And shouldn’t women of colour be allowed to give zero fucks too?

Yet the book fails to live up to its promise. As bold as it is to have a young woman resolutely set on a path of individualism, the novel falters in its delivery. For one thing, it’s painfully self-conscious. Consider the steady stream of Isa’s grating wisdoms: scrambling eggs (“you should always add a splash of milk to make the mixture a buttery yellow”), handling admirers (“you should never wear what someone gifted you in front of the person who gifted it”), and drinking wine (best done at home to avoid irresponsible behaviour). The prose occasionally veers into bald didacticism: “People think it is frivolous, but feminine things are often thought of that way; it is an important kind of knowledge that is overlooked.” And while Happy Hour is an interrogation of self-presentation — Granados purposely avoids any internal reflection — her narrator’s constant explanations demolish even the smallest bit of tension: “By not saving his number, I’d created a sense of distance.” Such relentless contrivance denies the reader any opportunity to lose herself within the narrative. We yearn for intimacy or emotional truth, for messiness or a flash of genuine joy, or indeed the forgetting of self that one associates with a good time. The tale ends up closer to organized fun.

Isa Epley might want to dispense with being Moral, but Happy Hour is a text that wants to teach its readers a Lesson. And that, as the narrator herself might say, makes it very tiresome indeed.

At times, it’s difficult to believe that Marie‑Sissi LaBrèche’s clever and devastating autofictional debut was written over twenty years ago. The book’s tone resonates fiercely with the current moment. As in Happy Hour, the protagonist of Borderline defies conventions (and wants you to know it). But where Isa issues her challenges with wryness and a lack of concern, Sissi leads with unrestrained anger.

At twenty-six, Sissi Labrèche is trying to come to terms with a traumatic childhood. Growing up, she lived with her mother and grandmother in a cockroach-infested apartment in Montreal’s east end, where she spent her days watching TV and playing with her Fisher-Price figurines. (The text is littered with references to 1980s pop culture.) Sissi’s mother, spaced out on antidepressants, figures more as an absence than as a presence; to her daughter, she appears “erased.” Her grandmother, who is by turns protective and manipulative, occasionally threatens to put her granddaughter in foster care or, worse, sell her to “the white slave trade.” The narrator is eight when her mother is placed in a psychiatric ward, eleven when she attempts suicide. While the other kids at school draw (bad) renderings of “The American Way of Life,” it’s always “The Russian Way of Life, The Concentration Camp Way of Life” for Sissi.

Haunted by her mother’s schizophrenia and bruised by her grandmother’s cruelty, Sissi has to contend with her own mental health struggles: she has borderline personality disorder, or, as she tells it, with characteristic bluntness, “a sick personality. A personality with the flu.” When emptiness and self-loathing come calling, she turns to sex, booze, and eventually writing, all of which she pursues compulsively and with creativity.

But Borderline is not a maudlin tale; there’s much that is funny and flagrant in its pages. The prologue lists Sissi’s fears, which include cows, whales, bills, the government, “butt-ugly rapists,” “butt-ugly killers,” and “foreigners who open dépanneurs and can’t understand you just want matches.” The story opens in a hotel room at the Château de L’Argoat, the narrator’s legs “spread so wide they’re almost on either side of my ears.” At her twenty-fourth-birthday party, fuelled by alcohol and a desperate need for attention, she strips down in front of her guests and begins to pleasure herself. The onlookers panic and try to get her off the floor, but not before an errant partygoer tries to cop a feel — just as Sissi had predicted someone would. In the forcefulness of the first-person narration, it’s easy to feel implicated in these moments of self-destruction. Her guests can’t resist her, even as they pity her; are we, the readers, any different?

Sissi is an utterly original character: bitter, honest, and mercurial. LaBrèche writes her in torrential, wildly associative prose that spills out “like puke out of a paper bag,” much like the narrator’s feelings:

I’m crying like a moron, crying to the point of making my eyeballs pop out of my head. My tears shoot out like machine gun bullets, it’s like I want to pierce all of humanity with my pain. I wet everything, I stain everything, too. My cheap mascara smears on my face, draws funny shapes over my skin, funny shapes that spread the storm inside my head across my cheeks. Because there’s a storm inside my head. That’s right. A big storm, with wind, rain, and even hurricanes. As soon as I close my eyes, it’s El Niño behind my eyelids. It’s El Niño with its millions of dollars’ worth of damage, its thousands of dead, and countless devastated territories.

At age eight, Sissi, fed up with her mother’s listlessness, declares that she would have sliced her parent in two and thrown her “evil-masked face into the fire,” if only she’d had Luke Skywalker’s lightsaber. On the page before, an unexpected string of expletives on the way to school —“Jesus-mother-fucking-Christ-fucking-goddamn-fucking-shit!”— occasions shock and laughter. And in the opening chapter, a hookup with a man named Éric —“super gross, super fat, super misshapen”— ends with him climaxing, rather unfortunately, in the narrator’s hair. “I hate that,” Sissi deadpans. “I looked like a colander dripping spaghetti.”

Ugliness rendered in fine prose or dressed up in personal charm — these are old tricks. Borderline goes full throttle with ugliness laid bare, but this is where the story starts to feel self-indulgent: it’s a bold novel but a thin character study. Isn’t there more to Sissi, we wonder, than fury and victimhood? Isn’t there more to her maternal figures than their pathologies? Readers in our #MeToo era will likely feel solidarity with Sissi’s spirited mid-coital misandry, but it’s not clear that Éric deserves such violent emasculation — especially when her anger stems less from the culture’s patriarchal leanings or its spiritual emptiness and more from her childhood abandonment and the alienation of illness. (And in its fat shaming, among other references, the book does show its age.)

Happy Hour and Borderline remind us that the stakes of women’s writing continue to be high, just as the prospect of reinforcing pernicious narratives remains ever present. But not all rebellions succeed. Both works, in the end, struggle to render fully realized and complex human portraits. But each, in its way, pushes the limits of representation.