Inequality in Canada: The History and Politics of an Idea

Share the Wealth! How We Can Tax Canada’s Super-Rich and Create a Better Country for Everyone

Canadians tell two stories about equality: one with conviction, the other with ambivalence. The first story is about rights, recognition, and representation — and we are wholehearted about it. We still struggle with racism and sexism, and we have yet to register the full horror of this country’s maltreatment of Indigenous people, but we generally share a moral conviction that all citizens are entitled to the same human and civil rights and deserve respect — even if we don’t always treat everyone that way. It is a core element of our identity as optimistic, multicultural Canadians.

The second story is about income and wealth, and it is more troubled and inconsistent. We nearly always talk about economic equality in the negative — inequality — as though some psychic injury prevents us from adopting any other perspective. There is no agreement on how much inequality is acceptable in Canada, nor is there agreement on how it should be calculated. Nonetheless, we know we have become more unequal over the years. While a tiny elite has grown fantastically wealthy, health and social services have deteriorated and employment has become more precarious for many. The consequences of these changes were thrown into sharp relief during the worst days of the pandemic.

Our political parties have responded with proposals to restore the Canadian middle class. But beyond a recent NDP proposal to redefine the so‑called super-rich — as those with more than $10 million in assets — none of them provide much by way of metrics to define the dimensions of the problem or targets to assess the chances of success. Perhaps that’s because we lack even a common understanding of whether inequality is a sign that our economy is unhealthy and unjust, or whether it is an inevitable companion of innovation and growth. 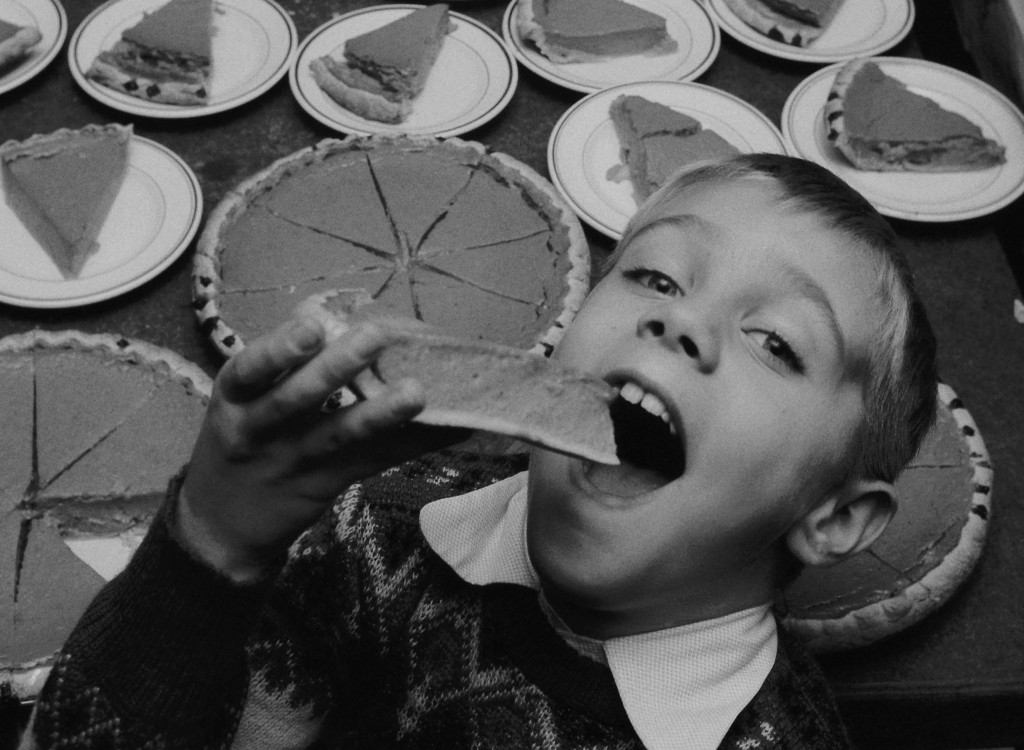 What goes into that slice of pie?
Image by Corbis Historical; Getty Images

If our thinking about economic inequality is confusing and thin today, that is in part because we gave it so little consideration for forty years. Inequality was irrelevant according to the economic orthodoxy embraced by the global business and political elites from the 1980s onward, until its credibility collapsed during the Great Recession. Neo-liberal economic theory claimed that government intervention to reduce disparity would just make things worse; the markets that were most free of political intrusion would deliver the highest levels of social justice. Neo-liberalism also pledged that the benefits elites acquired through personal and corporate tax cuts would trickle down to the majority of citizens and maximize the common good. That neither of these propositions was even vaguely plausible — both have now been widely repudiated by the same institutions that once promoted them — testifies to the tremendous charisma of neo-liberalism in its prime.

A great torrent of writing about inequality has flowed since neo-liberalism lost its grip on the imagination of policy makers. This is generally how a new orthodoxy emerges: through attempts to address the failings of the last grand theory.

If we as a country want to participate in the post-neo‑liberal conversation and help shape the next way of doing things, Canadians will need to develop more effective economic metrics and policies and a deeper knowledge of our circumstances. As we think about where we have been and where we want to be, one useful starting place is Eric Sager’s Inequality in Canada, which offers a detailed account of how politicians, preachers, economists, and editorialists have articulated and debated the issue since colonial days. Sager, professor emeritus of history at the University of Victoria, acknowledges the slipperiness of the concept and how our myopia has impeded a sure grasp of its importance. He calls his history “a salvage operation,” one that he hopes can “convince the reader that many British North Americans and Canadians in the past really did address the problem of inequality.”

Moving from pre-Confederation to the 1970s, Inequality in Canada is exhaustive and informed by recent studies that have shown how difficult it is to reverse disparity once it is firmly established. Because of its academic tone, the book might be a little forbidding for some, but Sager’s concluding chapter, “To Explore and to Know Again,” is so passionate, wise, sad, and engaging that readers should try to stay with him to the end.

It is a pity, however, that there is no companion volume to Sager’s that looks not just at the intellectual history of inequality but at the fact of it in the lives of Canadians, then and now. It would enrich our understanding of past and current debates if we better grasped the actual impacts that colonists and citizens experienced over the decades. In fact, throughout most of our history, the debate was about wealth and fairness, because wealth made British North Americans anxious. Both Roman Catholic and Protestant traditions viewed it as “a trust that people held in beneficial obligation” to the community. They considered it sinful to accumulate wealth for anything but the common good. Religious authorities also suspected that where fortunes were growing quickly, workers were most likely being cheated of their fair share.

Our forebears understood that in their society, as in ours, an abundance of wealth conferred great social influence and political power. Few wanted to recreate in the Americas the extreme hierarchies they had left behind in Europe. They were proud of how (relatively) egalitarian their society was. The nineteenth-century reformer Louis‑Joseph Papineau, for example, argued, “We live in a condition of society favourable to the nourishment of morality, peace, and the unity of citizens. We do not see those colossal fortunes that generate ambition and vices disruptive of social order; we do not see extreme poverty holding a large class in servile dependence.” But in the end, neither public policy nor religious sentiment was successful in restraining the growth of inequality. It would take two world wars, a global depression, and a pandemic to do that.

The modern history of economic inequality really starts in 1945, by which time there was as little of it in North America and Europe as there had been at any time since the hunting and gathering era of prehistory. For most of the next thirty years, inequality remained stable as Ottawa, like the governments of many other industrialized nations, kept taxes very high and capital tightly constrained while it built out the welfare state.

Eventually, however, we found ourselves in these present circumstances of low corporate and personal taxes, reduced public services, limited intergenerational mobility, and greater disparities. With Share the Wealth!, the economists Jonathan Gauvin and Angella MacEwen have an extremely simple answer for why that happened: “Our system has been rigged,” they write, borrowing the language of Donald Trump. Our economic inequalities “are the result of political decisions designed to purposefully favour the wealthy.”

Gauvin is the policy director for the New Democratic Party, and MacEwen is a senior economist with the Canadian Union of Public Employees and the party’s candidate for Ottawa Centre in the fall election. (The NDP’s Jagmeet Singh supplied the book’s preface.) Their text is clear, chock full of the latest statistical data, and carefully pitched to a general audience. They describe it as “a practical guide to building the foundation for a prosperous and equitable society.” But the echoes of right-wing American populism in their attack on our “rigged” system are disturbing.

“Whether we like it or not, we sail in the wake of an American economy.”

Generally speaking, American right-wing populism is strongly anti-government, anti-democratic, and increasingly racist, apocalyptic, and paranoid. Canadian left-wing populism has long condemned the “corporate welfare bums,” but it has typically refrained from calling the instruments of our democracy into question. A belief in the central role of government and a greater faith in its ability to deliver social goods efficiently and honestly have been points of distinction between our two countries.

Gauvin and MacEwen, however, suggest that our problems are entirely political: we have been victims of a conspiracy. They argue that if we simply root out the greedy, raise taxes (and they mean more than “higher taxes on expensive boats and cars,” which they describe as “an almost meaningless measure”), and increase financial regulations, better days will follow. There’s just enough truth to that notion to make it attractive, but it treats the real history of the past forty years — including slowing growth rates, stagflation, rising government indebtedness in an environment of high interest rates, continental economic integration, globalization, and the impact of technological change — as incidental to the inside story.

Share the Wealth! also fails to reflect on the unique policy challenges of a small but relatively affluent nation that sells 75 percent of its goods to a single trading partner. Whether we like it or not — and there are good reasons for both — we sail in the wake of an American economy that is more than ten times our size. Our corporate and personal income tax levels are necessarily influenced by decisions in Washington; our policy makers must try to set rates that prevent a brain drain to the south and that encourage business investments in order to create more jobs and wealth here.

The United States is now among the most unequal developed countries in the world, and Canada, though not so extreme, is more polarized than many of our European peers. We sit somewhere in the middle among OECD nations: not as unequal as the Americans or the Brits but much less equal than the Nordics.

There have always been ready arguments against endorsing a goal of economic equality. Some have argued that redistributing wealth could inhibit innovation and infringe on personal freedoms. Equality also conflicts with our common-sense acknowledgement that people have different talents and make different contributions to society. But the social extremes created by current levels of economic disparity threaten to undermine both the perception and the reality of civic equality. Inequality is acting as a subtle solvent on the bonds of our citizenship. It is evoking feelings of disenfranchisement and spawning conspiracy theories that can distract us from the hard work of seeking realistic answers for complex problems.

We need a clearer understanding of the nature and scope of the challenge and options for addressing it. The fact that Joe Biden’s administration is taking inequality seriously will provide us more room for action. Along with whatever party forms the next government, we must be ready to grab the opportunities that become available. Perhaps one day we might even find a way to make our two equality stories one.

John Cruickshank is a former publisher of the Toronto Star. He was recently Canada’s consul general in Chicago.