In Honorarium, Nathaniel G. Moore deftly juggles a multitude of erudite and pop references, orchestrates a mash‑up of prose styles, creates an obstacle course for the less than hip reader, and offers an acute glimpse into two decades of desperate creative activity. He writes of people experimenting at becoming people: that is, he writes of the semi-underground world of Canada’s small magazines, independent publishers, struggling writers, graphic novelists, and poets. Far removed, for the most part, from the cathedrals of CanLit and the postmodernist ideologues of academic literary criticism, these raw, intelligent strivers register searing particulars of the zeitgeist as it races onward — with technology and pop culture slicing generations, and attention spans, into thinner and thinner fragments and shards.

As a poet, novelist, short story writer, editor, book promoter, interviewer, former drug addict, and once-upon-a-time literary roustabout and macho prankster of the small press scene, Moore is well placed to take this particular pulse. Born in 1974 and brought up in Toronto’s then white-bread and mildly prosperous Leaside neighbourhood, in a dysfunctional and downwardly mobile family, with an alcoholic father and an alienated, gum-chewing mother, Moore struggled to climb out of childhood and invent who the hell he might become.

When you don’t have a real-life role model, it pays to look to culture — high and low. And Moore went looking. In 2005, he published Bowlbrawl, which chronicled the influence of Robert Towell, a bowling prodigy and later ruthless manager, who combined the cultures of wrestling and bowling into a spectacularly toxic brew. Eight years later, Moore published a novel, Savage 1986–2011, which drew upon his childhood obsession with the ultra-masculine pro wrestler Randy “Macho Man” Savage, who died of a heart attack in 2011. His most recent short story collection is Jettison. Along the way, the Globe and Mail has described his style as a cocktail mix of William S. Burroughs and Hunter S. Thompson. 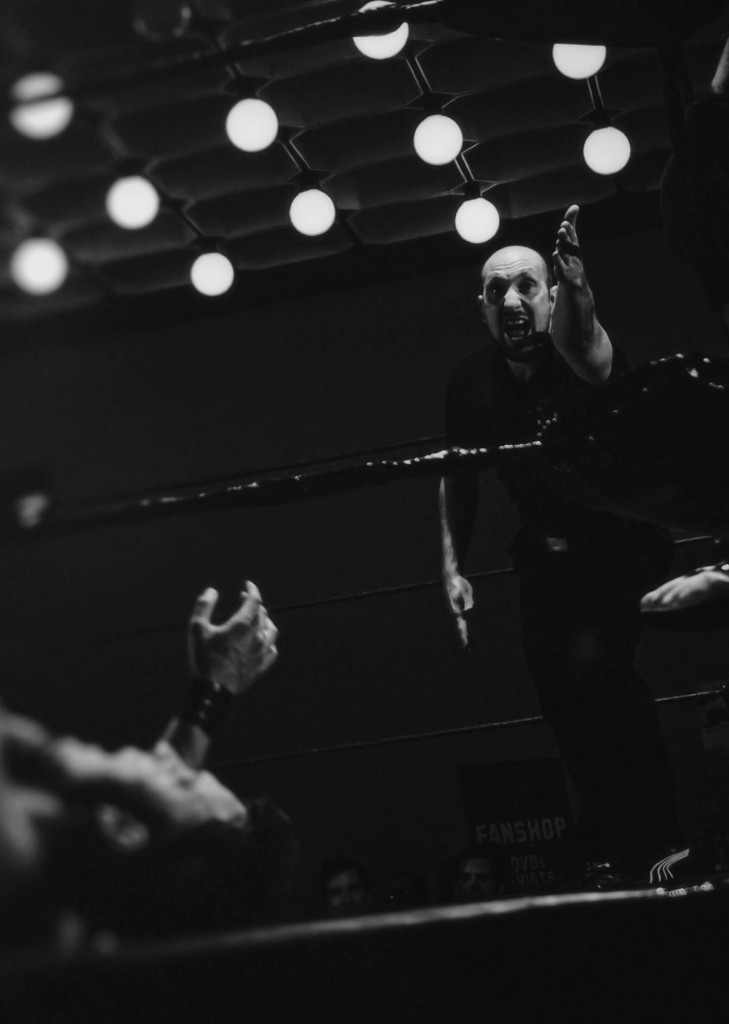 It’s not unlike great poetry.
Image by Martin Kníže; Unsplash

In one of the more than forty selections in Honorarium, Moore squares off with his 2,000-year-old idol. In what is essentially an exploration of gender fluidity, Moore concentrates on Catullus’s poem 63, where the poet tells us how the god Attis castrated himself, transformed himself into a woman, and was thenceforth referred to as “she.” Thus revamped, Attis became a worshipper of Cybele, the mother goddess, but also ecstatically merged with her and became her. The point is that gender fluidity is as old as the hills. But Yahweh banished it.

In a series of interviews, reviews, and articles, Moore deals with the state of small press publishing in Canada (basically, you should try to earn money from wrestling and hockey books to finance your volumes of poetry). He presents readers with a who’s who of recent writers and leads a guided tour of this literary scene today. He praises Randall Maggs’s Night Work: The Sawchuk Poems, a 2008 collection centred on the goaltender Terry Sawchuk, which makes for a dramatic and tragic uniting of “high” culture and “pop” sports. Moore also speaks with Heather Birrell about Mad Hope, her prize­winning short story collection from 2012, while inserting the dialogue into a self-reflective and perhaps narcissistic moment-by-moment diary of his day.

“Basically, you should try to earn money from wrestling and hockey books to finance volumes of poetry.”

A conversation with Jen Sookfong Lee about her 2017 book Gentlemen of the Shade: My Own Private Idaho analyzes the central characters from the director Gus Van Sant’s 1991 independent adventure film, My Own Private Idaho. The two young hustlers, Mike Waters and Scott Favor, troll the streets of Portland, acting as surrogate kin in their shared “search for temporary comfort in the chaos of life.” The lives and deaths of River Phoenix, the actor who played Mike, and Kurt Cobain, another artist who invented a stage persona, differed in their symbolism and pertinence, but they greatly affected Moore and Lee’s generation; the two wonder whether young people today can respond to such films as My Private Idaho as anything other than period pieces. “You can call it zeitgeist or whatever you want,” Lee tells Moore, “but no intense fandom exists in isolation.” Yesterday’s taste, today’s museum piece.

Moore also talks with Camilla Gibb, who was trained as an anthropologist and based her PhD on her work in Sudan and Ethiopia. They discuss the writers who have influenced her and her prizewinning novels, including Mouthing the Words, The Petty Details of So‑and‑so’s Life, and Sweetness in the Belly, and the concept of “otherness.” She explains her shift from academia to fiction and why she wrote, in particular, about a white Muslim nurse, Lilly, who works in Ethiopia.

The title of Moore’s piece about Sheila Heti is “How Should a Novelist Write?” It’s a question that plays off Heti’s 2014 novel, How Should a Person Be?, which, Moore explains, “covers a lot of different types of human thinking and human processing” as it “deals with obsession and purpose and a quest of self, a quest to belong and to find a life.” And he gets into a duet with the writer and editor Zsuzsi Gartner, author of Better Living through Plastic Explosives, among other books. In that conversation, Gartner defends the relevance of the short story, a wonderfully plastic form where you can put a life and a universe in a nutshell.

Derek McCormack’s 2008 novel, The Show That Smells, “reads like an experimental film of the Ed Wood variety,” Moore remarks. In two interviews, conducted years apart but combined here, the writers indulge in a Ping‑Pong match of cultural allusions that ironically evoke the sexual icons, real and imagined, of a carefully constructed gay life. It’s still the same old story: Who do you want to be when you grow up?

Moore’s developing sense of self and his effort to build a personal mythology permeate the book. Spinning onward from his youthful obsession with Macho Man Savage, Moore deals with pro wrestling in a cluster of essays. The sport, he explains, is a seismograph of social trends and conflicts, a sort of allegorical acting out of society’s ills.

The most subtle tremors of the zeitgeist, Moore argues — including shifting sexualities and social and gender roles, as well as the eternal struggle between good and evil — are registered in the delicacies of pro wrestling’s scenarios and stock characters, not unlike those of commedia dell’arte. In exemplary fashion, he plunges into the career of Bret Hart, a wrestling legend and Canadian icon, and into the publishing career of Michael Holmes, a writer and publisher who reveals why he too is obsessed with pro wrestling and why all true fans are continually rearranging the casting and scenarios of the morality plays they watch — booking and rebooking the villains and heroes in different combos. Great wrestling, then, is like good poetry, because both are staged. Like poets, wrestlers toil artistically toward a predestined conclusion; the art is to make the ending what it should be, to wrap up the sonnet. And of course the pro wrestling ring, like the theatre, has its own lexicon: assclown, kayfabe, mark, over, work, and so on.

“Pro wrestling sport, he explains, is a seismograph of social trends.”

Stylistically, the most linear parts of Moore’s book are autobiographical. He recounts his father’s alcoholism, the man’s loss of a job at an insurance company (because he got drunk and insulted the boss), and his decline into poverty. Moore also writes of his parents’ separation and divorce. Over and over, Moore sees a part of himself in his father. One begins to understand why he searched for alternative patron saints in Catullus, in hockey players, in bowling virtuosi and pro wrestling champs, and in a bare-chested macho cult of literature.

The family trauma moves backward, goes deeper. Moore tells the extraordinary but not unique story of his paternal grandfather, an Anglican minister who, impressed by a visiting evangelist, radicalized his own ministry and ended up creating a cult. There he practised faith healing and exorcisms; through ignorance, arrogance, and superstitious presumption, he killed a young woman who suffered from acute meningitis when he refused her access to medical treatment (he argued she was possessed by evil). With references to his own family’s past, Moore reviews Sarah Edmondson’s Scarred, from 2019, the story of her induction into and decade-long experience with the NXIVM cult, which reduced its adherents to branded sex slaves in the service of its charismatic leader, Keith Raniere (now serving time in a U.S. federal prison).

Taken together, the essays, interviews, and dialogues in Honorarium, remarkably free of jargon, sparkle with information and insight. They provide an indispensable guide to the worlds Moore depicts. Throughout, there are roiling energies — seething, promising, inventive. The extraordinary lack of ideological fervour sometimes gives the essays a dated feel. Moore’s discussion of “loaded words,” for example, is so innocent it appears to come from a pre-lapsarian universe. Militancy, ethnicity, and ideologies may now be replacing pop mash‑up, icon montage, and movie references as principal forgers of youthful identity. And if that is so, Moore’s collection captures a world that is already fading away.