Questions of Order: Confederation and the Making of Modern Canada

Toward the end of Questions of Order: Confederation and the Making of Modern Canada, the historian Peter Price notes that “every generation has a tendency to designate its position at the culmination of a dramatic narrative of human development.” Put another way, each generation sees itself at the end point of history and almost always has a difficult time overcoming its blind spots. It’s a telling observation.

With his book, Price targets what he sees as one of our blind spots today: our understanding of the nation itself. Canada was not “created in a single moment in 1867,” he writes in his introduction. “It was shaped instead by a gradual process in which many sought to explain the meaning of the new political jurisdiction and how those living within its expanding boundaries could or should identify with it.” Confederation was really a “mutable moment” with contested meanings; the idea that we share a “distinct nationality based on a constitutional framework and consisting of a community of people united by common citizenship and loyalty” is a modern myth. It is the result of “retroactive legitimation.”

Rather than blindly accept the importance of July 1 or the Fathers of Confederation, Price wants us to ask why someone would invoke the idea of Canada in the first place. What’s the goal? What purpose does it serve, and what does it obscure? Price draws upon the American scholar Antoinette Burton to insist that historians, in particular, should not “jettison the nation from their analyses.” Instead, Burton says, they need to “pay more attention to the question of who needs it, who manufactures the ‘need’ for it, and whose interests it serves.” 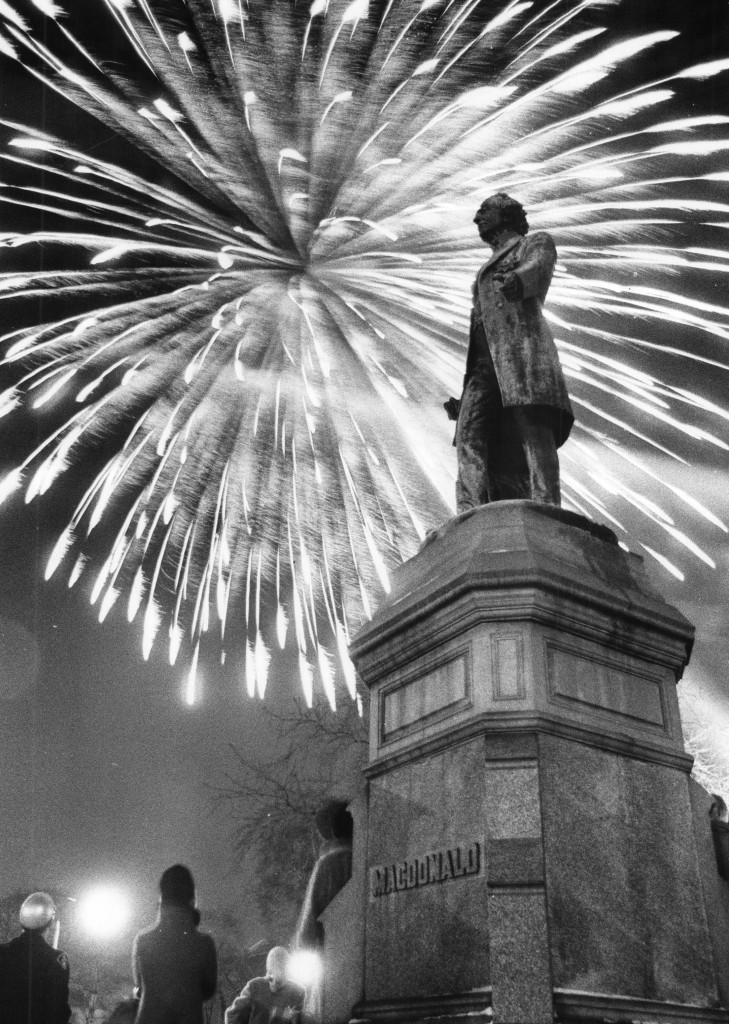 At its best, this kind of “post-national” history delves into actual primary documents: when studied with curiosity, the often foreign-seeming words and actions of the distant past can build up into a crescendo of multi-layered complexity that belies the simplifications imposed by a later age. On this front, Price delivers admirably. His book is a detailed exploration of how certain individuals (mostly highly educated and articulate) wrote about this new thing called the Dominion of Canada. He does a wonderful job digging into the magazines and books that were published in the decades after Confederation; Questions of Order essentially follows a nineteenth-century version of a scholarly Twitter debate, although, as was fitting for its age, the debate was long and drawn-out.

While Price doesn’t tell us much that we don’t already know, he does offer a nice refresher on how curious many of those older ideas now are. He cites debates about whether attention to one’s province (or colony, as many still called them) might get in the way of one’s commitment to the wider nation, for instance. And he presents a lot of talk about Canada’s place in the British Empire, on whether Confederation was just one step toward a wider imperial federation, and on the “conduciveness” of the new country’s “northern climes” for Anglo-Saxon peoples.

Perhaps Price’s most interesting reference is to William Norris, a lawyer from Woodstock, Ontario, who had the audacity to think that Canada ought to be a completely independent entity. Norris believed there was such a thing as Canadian citizenship, that it came out of a direct relationship to the Canadian state, and that the British were “foreigners” here and should be treated as such. He also complained that native-born Canadians, as opposed to the many born in Great Britain, “are pointed at as if they had committed some crime in loving their native land better than one three thousand miles away.” Norris wanted Canada to be able to sign its own treaties, to conduct its own foreign affairs. This stand made him something of an outlier.

With his final chapter, Price offers a rather unique look at the law concerning naturalization, which was incredibly confused at the beginning. Given that Canada could naturalize immigrants only within its own borders, what happened to Germans or Italians who immigrated here and then travelled abroad? Did they go back to being German or Italian? Did they now have no nationality? These conundrums highlight Price’s main point: that the idea of Canadianness and even Canadian nationality was not present from 1867 onward. It developed only slowly, over time.

If you were to read some of the excerpts in Questions of Order at your next Canada Day barbecue, you would receive a lot of odd looks. But putting it this way also exposes the weakness of Price’s work. Price writes about needing to correct a sense of the past that is today the dominant view, about showing how contemporary obsessions obscure the reality of the past. But in 2021, a year when certain scholars and activists organized a campaign to #CancelCanadaDay, are we really inundated with a generation of thinkers uncritically examining the idea of Canada in the way Price suggests?

This is a rhetorical question, of course. You need only compare the enthusiasm among historians for Canada’s centenary in 1967 with the reaction to the sesquicentenary in 2017. In 1967, book after book marked Canada’s creation, each one telling the story, rather proudly, of the nation. Fifty years later, there was almost no celebration. Instead, we had a few bits of commemoration that mostly complicated or disrupted previous narratives. The national events that did occur did everything possible to avoid mentioning history at all: travelling couches and moose statues were much more au courant.

For years now, historians of all stripes have been disrupting the idea of Canada by drawing attention to how the creation of this country went hand in hand with Indigenous dispossession. But now we find ourselves in a world where even having a Canada Day barbecue invites accusations of racism. A number of activist historians have been at the forefront of the Twitter brigade, amplifying calls to remove John A. Macdonald and others of European ancestry from any place of honour. While these historians might not be tearing down Egerton Ryerson’s statues in person, they are providing the intellectual ropes and hooks to the topplers.

Questions of Order is only tangentially about any of these contemporary debates. But Price too, in his own modest way, is focused on delegitimizing Canada altogether. Whenever the idea of Canada is invoked, he suggests, it is always with a political purpose. Even talking of our constitutional tradition, he insists, is “a rhetorical means of understanding and legitimizing the idea of nationality in Canada.” Studies of the Constitution, he warns, should “not be regarded as neutral and descriptive,” because there is nothing natural or real or legitimate about the Canadian nation.

“All nations are efforts of human imagination. They exist because people say they exist.”

In its own place, such reasoning is entirely fine. All nations are efforts of human imagination. They exist because people say they exist, because people live together and choose to identify collectively. Nations don’t just emerge naturally out of nowhere, and the idea of exactly what is meant by the “nation” will change over time. Intellectually, most of what Price tells us is accurate. But it’s what he’s trying to overturn that is most revealing.

Other nations could also be targets of revision: we could have scholars who pick apart the idea of Indigenous nationhood, who point to the ruthlessness of the Haudenosaunee Confederacy, or who study slave-holding practices in the pre-contact Pacific Northwest. We could be seriously coming to terms with the incredible levels of fighting that were simply accepted as part of everyday life on the Plains, where over a quarter of the population was expected to die by violence. Moralizing historians might, if they were more open-minded, be less parochial in their attacks on previous cultural evils. They could understand that there are plenty of examples of the sins that they attribute to European Canadians in every culture, including the victimized cultures they are devoted to. But this would be to expect a scholarly even-handedness from individuals who increasingly seem to be academics in name only.

Even in the light of such arguments, what Price is doing in Questions of Order is hardly wrong. He is no activist scholar, and although his book does dabble in the platitudes of contemporary woke politics, he is mostly offering solid research. But if Price were to take his main point seriously — that every generation feels the need to place itself at the centre of things, that the current generation falsely believes it has achieved the pinnacle of understanding — then his focus really ought to be on the growing number of activists who are absolutely certain that Canada is a horrendous country with a past so egregious that any figure associated with it needs to be ripped from any place of prominence.

We are quite clearly in the midst of a moral panic. Later generations will look back in amazement at how we’ve lost our sense of proportion. A truly incisive scholarship would target not tired tropes but the actual platitudes of today. What does the contemporary attack on historical figures — from Edward Cornwallis and John A. Macdonald to Egerton Ryerson and Wilfrid Laurier — say about contemporary Canada? In whose interests is this attack being carried out, and how does this moral campaign obscure the past? For obscure the past it does.

Every generation does indeed feel that it is at the culmination of historical development. It’s just that in 2021, as this panic unfolds and as individuals are singled out for saying the wrong kinds of words or for not mouthing the ritualistic slogans with sufficient fervour, neither nationalism nor anti-Communism nor even old‑school Canadian loyalism is to blame: it is the certainty of overzealousness. History will recover. It always does. But when? And at what cost?

Christopher Dummitt hosts the podcast 1867 & All That and teaches history at Trent University.

Christopher Dummitt wants to celebrate Canada Day, and I say, “Good! Let’s!” But what I will celebrate is what Canada may yet become, and not what it has been. I don’t want to celebrate the feats of Great Men who dishonoured the Crown and set a course for genocide.

Never mind questions like “Who were they and what did they do?” Who are we ? We are all treaty people, and this is the best ­paradigm I have encountered through which to reassess our national identity. Canada can survive self-­reflection; what it cannot survive is self-­deception. I really thank Professor Dummitt for his review and his thought-provoking analysis.