My dad passed away last fall, and my sister and I recently toasted him with a couple glasses of his favourite drink: Old Sam and Pepsi. The demerara rum is a popular tipple in Newfoundland, with its coppery red hue and flavours of molasses and tobacco. It can be a little harsh without ice, but it’s smooth when mixed with cola, which also gives the drink a distinctive frothy head. We call it Old Saucy because it had a way of bringing that quality out of Dad, especially when he was playing cards. As we topped up our glasses, I noticed that Old Sam had changed its label. For as long as I can remember, it had carried the visage of an elderly, laughing man, who we all figured was Sam himself, in the top left corner. Sure enough, this past summer, the Newfoundland Labrador Liquor Corporation opted instead for a simplified, text-based design.

The reason behind this new look, according to the regulator’s chief operating officer, was to avoid perpetuating racial stereotypes. But this statement left many rum drinkers scratching their heads. The face was sketched in black and white with minimalist features; the ethnicity wasn’t clear. Other big brand shakeups — including overhauls of Aunt Jemima, Uncle Ben’s, and the erstwhile Cleveland Indians (now to be known as the Guardians) — were aimed at shedding recognizable legacies, but Old Sam’s origins have proven to be more elusive.

Indeed, after researching the product’s history, the NLC could not determine who the elderly man even was. The retailer purchased the beverage in 1999, but the rum’s roots date back to the eighteenth century. As the tale on the brand’s website went, Old Sam was a man who sold the spirit in Guyana: “Merchants, naval officers and New World adventurers alike found their way to his post on the Demerara River to share a story, a laugh and a taste of the latest blend.” (This text has been removed, though the mysterious face still looks down from the top.) It’s possible that the likeness was based on Edward Young, the founder of the company that originally produced the bottles, but still, the verdict’s out. 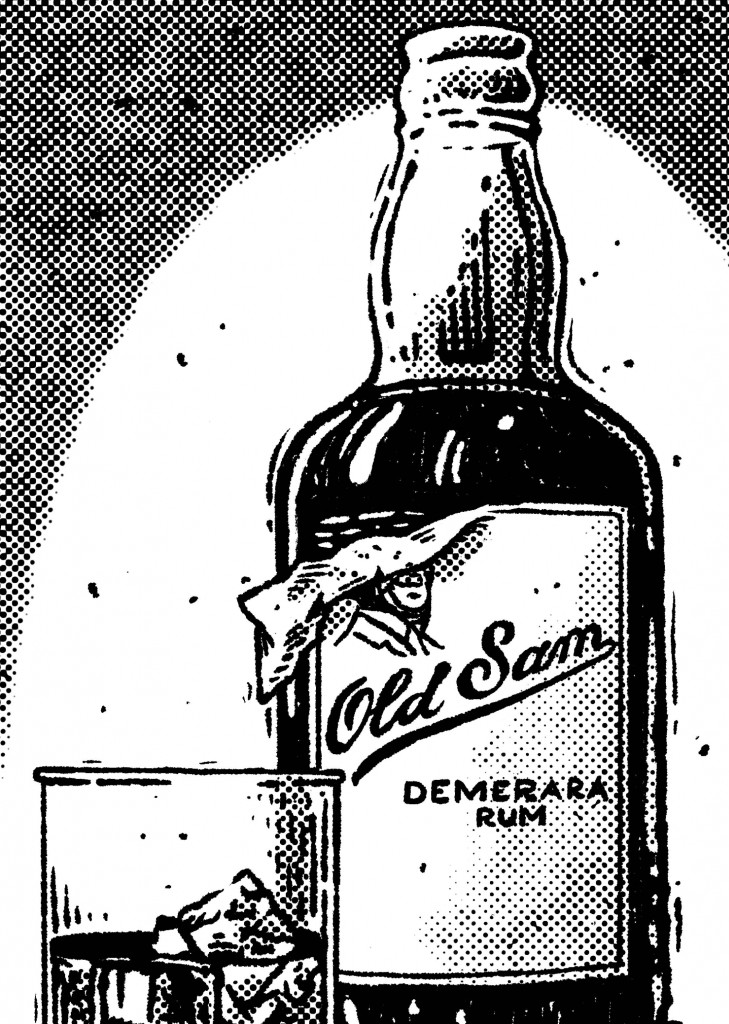 Peeling off a familiar label.
Image by Alexander MacAskill

Ultimately, since the NLC could neither confirm nor deny the caricature’s lineage, the liquor board chose to err on the side of caution. After all, just because the history behind Old Sam isn’t clear now, new information may still come to light down the road, and it is worth considering Newfoundland’s connection to the British slave trade. Demerara rum was imported as part of the triangular exchange that sent salted codfish down to the British West Indies to help feed slaves in the Caribbean and the Americas. It is not unreasonable to make the link. And while “Old” does not feel as demeaning as “Uncle” and “Aunt” for people of colour, it isn’t entirely free from connotations either.

If the face was meant to be interpreted as Black, then it would be playing into a type of branding that the University of Illinois advertising professor Jason Chambers has described as “ethnicity as authenticity.” In such cases, companies use stereotypes to solidify product associations. These can sometimes be fairly innocuous: Old Dutch Cleanser, which portrayed a clog-shod woman brandishing a stick to drive away dirt, drew upon the hackneyed idea of Dutch people as hyper-clean. Others can be more pernicious, like the image on the container of the household poison Rough on Rats, which depicted an Asian man eating a rodent.

Representation has become something of a buzzword lately, but it’s a very human need to not want one’s identity put in — or on — a box. The problem with brands like Aunt Jemima (now Pearl Milling Company), Uncle Ben’s (rebranded as Ben’s Original, with the face of the Chicago maître d’ Frank Brown removed), and possibly Old Sam is that they are limiting. It’s not that there are no women who look like Aunt Jemima who cook pancakes, but the product’s association with the devoted and submissive “mammy” archetype, as well as its very real connections to slavery, dominates the perception.

Tellingly, when I asked friends and family who they believed Old Sam was, most had assumed that he was Black. Others simply shrugged and admitted that they had never really thought about it. This seems to be the general reaction to the change: a shrug of the shoulders. Nonetheless, some of the predictable sound and fury erupted about capitulation to the culture wars. (Those who throw up their hands ought to remember how Newfoundlanders chafe at the image of the “goofy Newfie.”) Much of this irritation is fuelled, arguably, by a hostility toward being associated with anything labelled as racist — with the mindset being “I’m a good person and I like this; therefore it can’t be bad.” Whatever questionable rhetoric or ideas may be present in mainstream discourse, nobody wants to be called a bigot as opposed to simply “out of touch.” There’s a cognitive dissonance in acknowledging favoured brands as problematic: to do so would involve acknowledging something distasteful within ourselves as well.

These seemingly sudden changes have startled many, but debates over representation have been going on for generations. For instance, Paul Kenneth Edwards’s The Southern Urban Negro as a Consumer, published in 1932, surveyed African Americans’ buying power and preferences and highlighted Aunt Jemima’s depiction as particularly objectionable. With the recent incidents of police brutality and the resulting protests, we’ve reached a tipping point where brands are finally agreeing to switch course.

It is tempting to decide that the only safe pathway for marketers is to stick to text and forgo any imagery, but this would be a weak-willed and overly simplistic approach. The reality is that time passes, perspectives shift, and companies need to keep pace with hist­ory. No one should be surprised when consumers demand that advertisers develop more thoughtful campaigns. Easy answers are, as always, hard to find, but, at the very least, coasting on century-old visuals just feels lazy.

Personally, I won’t deny I’m a little sad to see the old label go. Obviously, I feel some nostalgia about my dad. There’s also something to be said about how we get attached to logos — a ­familiarity that companies undoubtedly leverage. But what is there to get worked up about? The name is the same and, more important, so is the recipe. My dad’s favourite drink still has its frothy head. Old Sam is second in sales to screech among local rums, but it’s not as if its namesake occupies a place in local history, like John Cabot or Joey Smallwood — although a strong contingent in the province would hold Sam in greater esteem. Whoever he was, and however saucy, the laughing old man has been lost to the vicissitudes of history.