Everyone Knows Your Mother Is a Witch

Six years ago, the English writer Sara Pascoe launched an online petition to clear the name of Anne West, who was hanged for witchcraft in Manningtree, Essex. In the two busy years between 1644 and 1646, West and some 300 other women were tried by the famed witchfinder general Matthew Hopkins (played with camp delight by Vincent Price in a 1968 film). Several disgruntled neighbours stepped forward to give their testimonies, including Anne’s teenage daughter, who also confessed to having “carnall copulation with the Divell.” One witness said that West’s dirty looks had caused her pregnancy to end in a miscarriage. For Pascoe, it was an unjust case of community paranoia and delusion and a familiar hunt for a scapegoat. What’s more, Hopkins’s own motivations were dubious (a witchfinder general is not much without witches).

Centuries later, Eric Pickles, an Essex member of Parliament, stood behind the online petition. “Since the majority of the Matthew Hopkins trials have been digitised,” he said, “we can see that all his victims were confused, bullied and almost certainly innocent. We should remember those convicted witches without titillation or Halloween nonsense but for what they were: victims of the hysteria that gripped people who frankly should have known better.”

Petitions come and go, and Anne West has yet to be pardoned. But in the current political climate, her case feels uncomfortably familiar. Are you up on your QAnon theories? How about the one where Democrats kill babies and harvest their blood? Or the “serpent DNA,” which led a father to execute his own children? The gory details of right-wing paranoia aren’t a far stretch from the witch hunts of the past: fringe conspiracies that threaten to go mainstream, vaccinated neighbours and health professionals called out as liars and traitors, and chants for the arrest of Anthony Fauci. Keep in mind too that the rioters at the U.S. Capitol on January 6 set up a makeshift gallows. 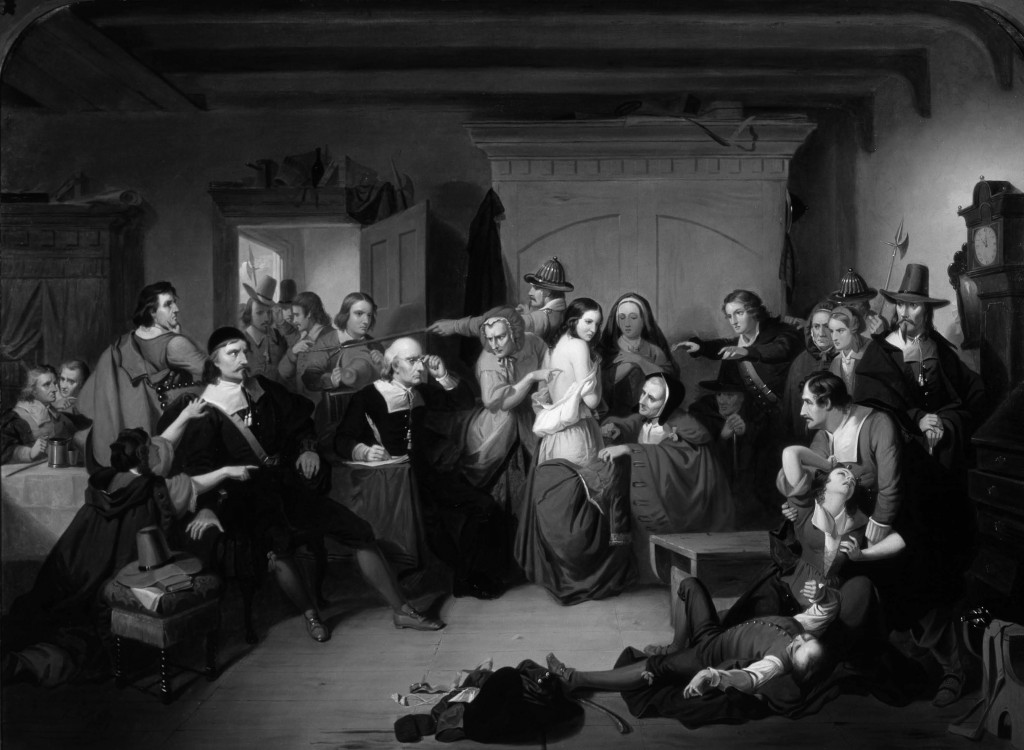 That familiar hunt for a scapegoat.
Image by t. h. matteson, 1853; Wikimedia commons

It’s no coincidence, then, that two current novels take the trials of the seventeenth century as their subjects. After all, Rivka Galchen’s Everyone Knows Your Mother Is a Witch and the English writer A. K. Blakemore’s The Manningtree Witches are just tapping into the zeitgeist.

Galchen’s book shifts the scene to the Protestant town of Leonberg, near Stuttgart, to tell the story of Katharina Kepler, mother of the astronomer and mathematician Johannes Kepler, who described the laws of planetary motion. The real-life Katharina was accused of sorcery when she was a grandmother in her seventies, and it fell on her famous son to launch a defence. Galchen imagines how the story might have played out. “From very early in life, I had enemies,” Katharina admits in the opening paragraph. Most of the tale is told in her voice, as she describes her life and trial to her neighbour and friend Simon Satler, as if in the form of a long letter. “Attributed to me,” she continues, “is the power to poison, to make lame, to pass through locked doors, to be the death of sheep, goats, cows, infants, and grapevines, even to cure — at will.” All nonsense, she tells Simon. “I can’t even win at backgammon, as you know.”

In May 1615, Katharina is summoned to see the ducal governor, Lukas Einhorn, whom she calls the “False Unicorn” for his questionable credentials. “It was a rotten spring that year,” she says. “The beets were wrinkled, the radishes spare. The rhubarb, usually a celebration, was like straw.” The winter was even worse. “I met a shepherd from outside Rutesheim,” she recalls, “whose nose fell off when he wiped it.” The warning signs are there: the times are hard, and someone has to take the blame. But Katharina has yet to put the pieces together. She dons her boots, kisses her cherished cow, Chamomile, farewell, and heads into town.

At the governor’s rooms, she is surprised to meet her first accuser. Ursula Reinbold, the glazier’s wife, claims that Katharina used dark powers (and wine) to make her “moan, weep, cringe, writhe, be barren, and cackle.” Katharina denies it. As for the False Unicorn, like any bureaucrat, he’d like it all to go away: too much paperwork. But rules are rules. If further accusations follow, the law requires torture — to yield a proper confession — followed by burning. On the plus side, some executioners were known to tie bags of gunpowder around the necks of those sentenced to the pyre, so that with an almighty bang, the explosion would take out the heart. This was a much more civilized death than a slow roast.

Of course, more accusations come. Rosina, the baker, declares that Katharina Kepler once rode a goat backwards. Topher Frick, the butcher, says that Katharina brushed past him and put a pain in his leg. There was also the time she made a horse and two cows sick. Claims pile up. Torture looms. So the onus for building a counter-case falls on Johannes, the educated son, as the historical record shows.

“This was a much more civilized death than a slow roast.”

The novel is deadpan, funny in the way that QAnon, with its otherworldly catechism, is funny: you want to find the humour in lieu of being left with only desperation. Superstition and accusation born out of rumour and self-flattery are ancient and contemporary both. The accuser is a big shot, a local hero. Check Twitter: right now! Someone may be denouncing you or someone you know for riding a goat backwards. And if it hasn’t happened yet, it will. Galchen knows the magic of this predicament. And if there’s a theme to Everyone Knows, it might be the folly of relying on the truth, on science, on common sense. The game is now stacked against empiricism.

Katharina is a scientist too; it runs in the family. She knows about natural remedies: celery root for gout, or sage that can “steady a hand” or “counter a fever” or even help “with a palsy.” She believes the truth will set her free. But this is an era poised on the line between religious certainty and new discoveries: truth depends upon which side of the divide one’s foot falls on. It’s political, conditional. The reader knows Katharina is not a witch but despairs that, in the end, facts won’t matter. “You can’t discover what’s true based on how many people think it’s true,” she remarks at one point. Sound familiar?

Rivka Galchen’s tone is plain-spoken, contemporary, while A. K. Blakemore embraces the gothic. The Manningtree Witches is embellished with faux period dialogue (“Mind thy tongue,” and so on), but it is rich in detail and psychology. The narrative voice belongs, mostly, to Rebecca, Anne West’s daughter and future accuser, who is, like any adolescent girl, struggling with maturity and sexuality and a need to see her parents as oppressors and fools. There are any number of men ready to use her for their own gain, including the witchfinder Matthew Hopkins and a conflicted young clerk named John Edes, with whom Rebecca flirts. “It is strange,” she says early on, “how you can want something terribly — like a man, or to die — and at the same time be frightened to the dipping point of the heart by it.” Here too, what’s true and what’s real are conditional and dependent.

The story turns when Thomas Briggs, a local boy, has a run-in with Anne (he shows her bad manners, so she scolds him for disrespecting his elders), takes sick, and then exhibits symptoms of possession: his body contorts, his eyes roll back to the whites, and, according to a witness, “he vomits up dusty feathers and miniature teeth . . . like to an owl’s leavings.” Concerned neighbours bring apples and cakes, pigeon pies and figs to help the poor Briggs family, and to catch a glimpse of the possessed boy. Rebecca is jealous of the attention. She too wants to witness the Devil’s work, but she wishes even more to be taken seriously. “I want something to happen,” she says, “that might prove I am still counted on God’s side.” Great power, even if imagined, comes from he or she who lays the charges.

In Essex, as in Germany, the mania that led to witch burning passed, and the “hysteria that gripped people who frankly should have known better,” as MP Pickles put it, morphed into other obsessions: the tulip frenzy in Holland, Tanganyika’s mysterious laughter epidemic of 1962, the North American panic over clown sightings in 2016, and whatever you want to call the irrational hatred of surgical masks during a crisis of communicable disease.

At heart, maybe, people just want to find their tribes: there is a sense of belonging in delusion, so long as others make you feel at home for it. Katharina Kepler and Anne West were independent thinkers, outsiders, and so they were targets. These two period novels, different in tone and poetry, make a good double-header — a two-book lesson in how we live now.