Year of the Rocket: John Candy, Wayne Gretzky, a Crooked Tycoon, and the Craziest Season in Football History

On a warm October night this past fall, the storied Toronto Argonauts hosted one of their perennial division rivals, the Ottawa Redblacks. COVID‑19 restrictions limited capacity for the event to 15,000 fans. It was a Wednesday, which can be a tough sale for most teams, but especially for the Argos. One has to wonder what sharp minds at the CFL head office decided to schedule a mid-week game for a club in need of every break it can get. The attendance at BMO Field that evening was 6,788, a figure that speaks for itself. And while the Argonauts had billed the contest as a tribute to their championship season from thirty years prior, the game served only to demonstrate how far the Canadian Football League has fallen in the country’s largest metropolis.

The irony of celebrating Toronto’s 1991 Grey Cup in front of such a small crowd only adds to the incredulous feeling one has when reading Paul Woods’s Year of the Rocket. Parties! Celebrities! Media attention! Fans! Controversy! Wins! (Did I mention fans?) “The craziest season in football history,” as Woods puts it in his subtitle, had it all, including one of the biggest sports stories in North America: the highly touted Notre Dame star Raghib “Rocket” Ismail had signed with the Argonauts for $4.5 million (U.S.) per season at a time when entire rosters in the CFL might cost just $3 million — Canadian. But there’s more.

The acquisition of a player expected to be the number 1 pick in that year’s National Football League draft was a story in itself. But added to this yarn was the fact that the new owners of the Toronto Argonauts included Wayne Gretzky and John Candy, who had minority positions, along with Bruce McNall, the American business exec and later convicted felon who also owned the LA Kings. “Uncle Buck is going to own us? I couldn’t fathom it,” one Argo recalls, with reference to one of Candy’s best-known movie roles. “And Wayne Gretzky and Bruce McNall? You couldn’t believe it could possibly happen.”

For those interested in football north of the border, the Argonauts have been a major concern for a long time. A team that drew 40,000-plus fans per game in the 1970s slowly saw its importance decline during the ’80s, as major-league baseball took a firm hold in Toronto. There were other issues, such as changing demographics and the sense that a self-styled “world-class city” had far better things to do than concern itself with something as authentic and picayune as the CFL. Woods nods to these topics, but he does not delve into them. Doing so would have produced a more textured understanding of the era and given the book more heft. Essentially, what he’s done instead is put together a football and business story, augmented by a host of interesting characters, that takes readers down memory lane. 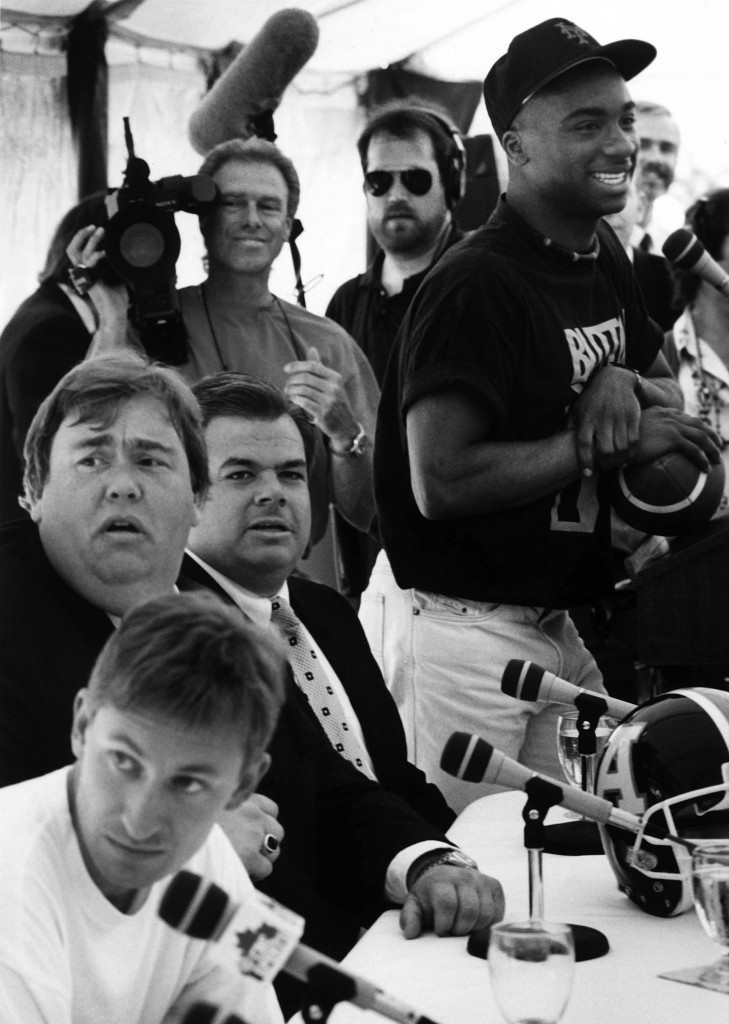 Would you look at that.
Image by Hans Deryk, 1991; Canadian Press

The completion of the SkyDome (now Rogers Centre) in 1989 was supposed to change the course of events for the Argonauts, much as a move to BMO Field in 2016 was, ironically, to rescue them from their former saviour. That shiny bauble of a stadium and the fact the Double Blue came up for sale in 1990 proved to be the propitious circumstances that brought a little Hollywood stardust to a susceptible local audience. The magic did not last long.

At the heart of this book is that incredible season when the new ownership made its splash with Ismail, whom Woods calls “the most-talked-about player ever to step on a Canadian football field.” The goal was to light up the city and the league with both money and star power. The night before the Rocket’s debut in July, McNall, Gretzky, Candy, and a host of celebs rolled into town. They were joined by Dan Aykroyd, one half of the former Blues Brothers, who jammed with assorted guests at the famed Horseshoe Tavern, on Queen Street West: “Drinks flowed. Aykroyd blew a mean blues harp at the front of his red-hot band. Candy sang and mugged from the stage.” The long-time Toronto sportswriter Doug Smith remembers it as “the single greatest sports party I’ve ever been at.” There was a game to be played the next night, when 41,000 fans witnessed the home side down the hated Hamilton Tiger‑Cats 41–18. “It was almost impossible not to come away believing it was the dawn of a new era in Canadian football,” Woods writes.

While Rocket Ismail was the star on the field, John Candy was the indisputable star off it. The comedic actor — who loved the Argos with a ­passion — turns out to be the most vivid character in Year of the Rocket. He may have died in 1994, but he almost comes back to life in these pages. Whereas Ismail is missing practices, sleeping in, and generally being a petulant young man with too much responsibility foisted upon him, Candy is buying drinks for the house, travelling to games across the country in private jets, and staying up all night having a good time. “I’ve never seen anyone party as hard as John Candy did,” observes the former Saskatchewan Roughrider president Phil Kershaw.

All of the components of a compelling story are in place, but Year of the Rocket never rises up to be much more than an average sports book. Woods explains what happened, who scored, and who said what, but he undermines himself to some degree with writing that needed to be sharper and insight that needed to go deeper. He includes numerous quotations without specifying whether they were contemporaneous or came via interview much later (interestingly, Ismail refused the request for his story), and he follows most of these with “says,” rather than mixing it up — a somewhat careless repetition that comes at the expense of context.

Woods does, however, pepper the book with numerous entertaining anecdotes: Adam Rita, head coach of the Argos, made Matt Dunigan’s wife and parents sign off on his playing in the Grey Cup, for example, after doctors cleared the quarterback despite a broken collarbone. Woods also spends a full chapter investigating the infamous frozen beer can that a mysterious someone threw at Ismail as he galloped toward a Grey Cup touchdown in Winnipeg. It’s a Warren Commission Lite — and a fun read.

Given the state of the good ship Argonaut in 2021, simply researching and publishing this book was an act of courage and faith. Diehard fans will enjoy it. But it’s the casual fan whom the Argos, writers, and publishers need to work harder and smarter to find.