Stephen Dale
Between the Lines
288 pages, softcover and ebook

Stephen Dale’s Shift Change takes me back to when I was an undergraduate at the University of Western Ontario, in the late 1980s, and spending my summers working in St. Catharines. Each fall, as I would make my way back to school across southern Ontario, a meandering and at times almost Homeric ride from St. Catharines would bring me to the Hamilton bus depot, which was downtown on Rebecca Street. Arriving there — at this way ­station in Canada’s best-known industrial city, still home to many major firms, most notably Stelco and Dofasco — was always a bit like time travelling. The smell of old-school foundries ­literally permeated the air.

Hamilton occupies a unique place in our national economic development because of its association with heavy industry. It is also unique among cities of similar size in receiving a disproportionate amount of attention from a wide variety of writers. Scholars, especially those who were part of the wave of labour and working-class history that began in the ’80s, have shown a lot of interest in the place. Concordia’s Steven High, for example, has lamented its manufacturing job losses and reflected on the social and cultural legacy of its plant closures. Arguably, we know more about the history of living and working in Hamilton than we do about living and working in Toronto.

Dale is based in Ottawa, but he is proud to have grown up in the Hammer in the ’60s and ’70s. He sees the economic and social changes experienced by the city in recent years as a “tectonic shift” brought on by deindustrialization, and he sets out to explain that shift in an accessible narrative divided into five chapters. In doing so, he covers a decent amount of ground. At times, Dale’s affection for his hometown hinders his analysis as much as it helps. Nonetheless, there are aspects of Canada’s tenth-largest city that are really known only to Hamiltonians, and Dale effectively reveals them for readers who may have little more than a passing familiarity with the place. For instance, anyone going through Hamilton on the major highways that pass through and around it will see the Niagara Escarpment — but not necessarily the geological formation’s socio-economic significance. Whether a person lives up or down the so‑called mountain has long signalled social position, with the working-class north side literally looked down upon by the bourgeois citizens on top. 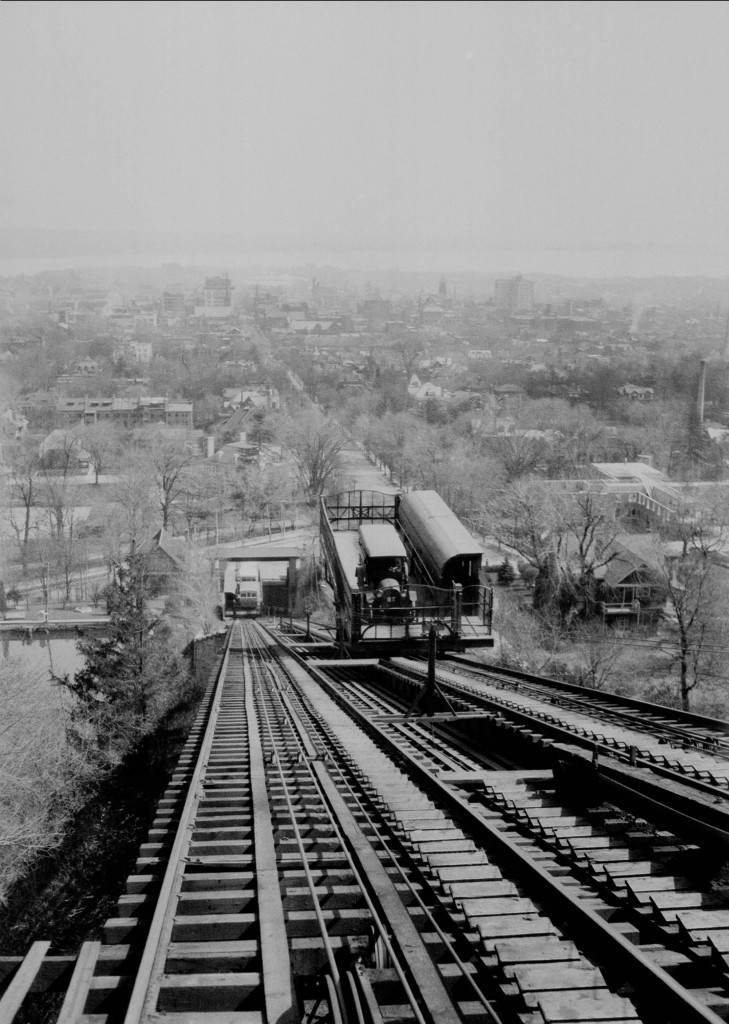 The ups and downs of an ambitious town.
Image by National Archives of Canada; the Canadian Press

Hamilton has been nicknamed Canada’s Pittsburgh, after another centre of the steel industry. But Dale also frames Hamilton as Toronto’s Brooklyn. His choice of comparison is noteworthy, in part, because of the communities he does not mention. Hamiltonians look up and down the mountain and around Lake Ontario to Toronto. How the city relates to the other towns and cities of the Niagara Peninsula, many of which have been hit much harder by deindustrialization, does not loom large in its collective psyche or in this book. And putting Hamilton in the same rust belt league as, say, nearby Buffalo would likely count as high ­treason for most locals.

Although its wealth and incomes have been unevenly shared, Hamilton was and continues to be an affluent city. The working class was at its apogee in the years immediately following the Second World War, and Dale devotes welcome space to the landmark 1946 Stelco strike —“the most formative historical moment, by common consensus”— that helped cement middle-class living standards for industrial workers throughout Canada. United Steelworkers’ Local 1005 represented those on the job and was also something of a social institution, running blood drives and supporting the city’s parks, libraries, and hospitals. The rise of Local 1005, he writes, “changed the way Hamilton functioned as a community.”

Hamilton’s steelmakers certainly built a sophisticated and profitable industry, but their relations with labour were often tense, even when their workers were not on the picket lines. Dale writes a lot about Stelco, but he spends less time on Dofasco, the port city’s other big producer. Dofasco never unionized, and, as the sociologist Robert Storey has revealed, its management made sure that the firm’s workers received compensation and other inducements on par with those of their counterparts at Stelco — to dissuade them from signing union cards. That a Canadian version of welfare capitalism was expertly honed by Dofasco executives, with ramifications for industry across the country, merits more attention than it receives here.

Although Dale laments the loss of the well-paid blue-collar jobs, he does not fall into the romanticizing trap that so often ensnares authors who write about deindustrialization. Hamilton’s factory work was often dangerous, as it was throughout Canada, and employees were divided by ethnicity, with eastern and southern Europeans (among others) facing discrimination on the job. One of the cruel contradictions of Hamilton’s past is that the same Italian immigrant population that established countless beloved restaurants and bakeries was marginalized within the city’s flagship companies.

While industrial job loss is one key theme of Shift Change, the gradual gentrification of Hamilton is another. Dale even does his readers the courtesy of explaining the word, which is often poorly defined in popular discourse. Simply put: Older neighbourhoods are gradually inhabited by upper-middle-class professionals and managers who renovate the homes they’ve recently acquired, which drives up their value. Small independent businesses gradually disappear as more upscale shops replace them. Public transit is often weakened because wealthier citizens prefer cars, and former working-class areas gradually become too expensive for ­average people. In this sense, Hamilton has indeed become like Brooklyn: too expensive for a ­person making average wages.

Every city has both heroes and villains, and Dale links several of the latter to gentrification. Despite his sympathies for organized labour, he rather unexpectedly points a finger at the Laborers’ International Union of North America, or LiUNA, which, in 1998, purchased and then renovated the former Canadian National Railway station in the city’s north side. This venture transformed the James North area into what he describes as an epicentre of hipness. “With a few strategic land purchases, a shrewd reading of emerging trends, and, apparently, a bit of luck, LiUNA arguably set the stage for the current frenzy of gentrification,” Dale writes. Nonetheless, he is generally approving of the union’s overall economic impact on the city.

“Local activists with scarce resources and considerable determination are trying to hold back the tide.”

Dale is decidedly enthusiastic about Hamilton’s artistic community and non-profit sector. As they do in cities across the world, local activists with scarce resources and considerable determination are trying to hold back the tide of social, political, and economic inequality. And even with the loss of industrial jobs, organized labour remains influential. In 2003, for example, 1,200 support staff at McMaster University were certified as a union; they are now represented by Unifor. In the process, they have made themselves strong advocates for workers across Hamilton and the higher education sector in Ontario. McMaster’s School of Labour Studies has also engaged in significant outreach to the workers’ movement in the city. “In this respect, at least,” Dale comments, “Hamilton is a more egalitarian place than it once was.”

Considering the many challenges facing the Ambitious City, Dale offers thoughts on policy solutions, which he pairs with interviews with local policy experts. He is a firm advocate of public transit throughout the region: “Transit has the ability to put the poor on a more equal footing with the rich.” As access to transit increases, another policy goal — affordable housing — should become more viable. But he does wonder if the political will that’s necessary for fostering a renewed sense of community exists. “Or will those great ideas stay confined to briefing booklets, of little interest to anyone in the real world?”

Ultimately, Dale is kind to Hamilton, but writing a book like this means leaving plenty out, including lessons drawn from other places. Like Pittsburgh, the city has emphasized health care services and education as it has gradually lost its steel plants. But other rust belt cities, such as Rochester and Baltimore, have pursued similar strategies to lesser effect. In countless ways, Hamilton has done better than Buffalo and many other Canadian communities that have seen both industry and population decline. “When you take a look at Hamilton,” Dale quotes the labour studies professor Wayne Lewchuk, of McMaster University, “you can see that it’s not falling apart. It’s certainly had some bumps, but there’s been a transition.”

Saying that things could have been worse is likely cold comfort for those who used to work at Stelco, Dofasco, Camco, and all the other factories that supported them. It is also easy to imagine a halcyon period when Canada’s urban areas were entirely full of bustling factories that employed scores and scores of well-paid unionized workers. In reality, there have always been marginalized outsiders in our cities. Precarious work is as much historical fact as contemporary trend.

Still, Shift Change: Scenes from a Post-industrial Revolution is a useful and passionate addition to those books on Hamilton that already sit on library shelves, although it is not especially engaged with those titles. Dale references the Wilfrid Laurier University historian Rob Kristofferson and the artist Simon Orpana, but he does not cite the scholarship of Craig Heron, of York University. Ignoring Lunch-Bucket Lives: Remaking the Workers’ City, Heron’s monumental look at late nineteenth- and early twentieth-century Hamilton, is especially curious, because no historian has done more to put Hamilton in the history books than Heron.

Steeltown may have suffered, but it is resilient. Even as Dale wants to see it renewed, a strong sense of community remains. As I learned on all those bus rides long ago, Hamiltonians are proud and unpretentious. They will be the first to hand you the shirts off their backs if you are down; they will also be the first to tell you to go to hell if you cross them. With a book full of unique characters and places — where the city itself is the greatest character of all — Stephen Dale offers new insights into a very special part of the Canadian landscape.

Jason Russell is the author of Canada, A Working History.