All the Quiet Places

Omar El Akkad opens his second novel, What Strange Paradise, with a young boy lying face down on a shore littered with bodies and wreckage. With this image, El Akkad, the author of American War, sticks his finger in an open wound. In 2015, photos of the drowned body of the three-year-old Syrian refugee Alan Kurdi made headlines around the world after the small boat that carried his family capsized in the Mediterranean. In this fictionalized story, though, the child is not dead. His eyes open suddenly, and he dashes into the woods before the shocked relief workers roving the beach in haz‑mat suits can take him to the holding ­centre. El Akkad’s protagonist is not Alan Kurdi but Amir Utu, an eight-year-old boy from Homs, who has washed up on an unnamed island that resembles Crete.

It’s one thing to invoke the image of Alan Kurdi, quite another to resurrect him and cast him as a central character. Capably handled, such a provocation could form the basis of a trenchant and deeply moving book; What Strange Paradise is not that book. That it received the 2021 Giller Prize is neither surprising nor undeserved, however. With its self-seriousness and transparent moralism — at one point, an islander dutifully peels off a flake of Amir’s sunburned skin, and “in the light she sees that it is not brown at all, but a translucent thing” — this novel is a worthy receptacle for the glittering superlatives of awards culture and the abiding notion of Canadian literature as vegetables: good for you, if not always good.

El Akkad’s story unfolds around the opening beach scene in alternating “Before” and “After” chapters. The “Before” parts describe Amir’s journey from war-torn Syria to Egypt to the ill-fated boat trip. The “After” sections follow Amir and Vänna Hermes, a local teenager who helps him evade capture. Chief among those chasing the two kids around the island is the brawny and cartoonishly villainous Colonel Kethros. Despite being tasked with containing a constant flow of migrant vessels, Kethros becomes singularly fixated on detaining Amir before he can take a ferry to the mainland, where better prospects await.

In case the religious connotations of a resurrection narrative are not obvious enough, the “After” chapters take place during “the holy weekend” in April. In effect, Amir awakes on the shore on Good Friday and must elude authorities until Easter Sunday, when the ferry will leave with or without him. The island, then, is a kind of otherworldly limbo, and with characteristic heavy-handedness the author furnishes the landscape with such a disorienting array of fictional flora and fauna — sleep-gum forests and cloudstone caves, flocks of sunheads and herds of snowshoe goats — that it starts to feel like Narnia. 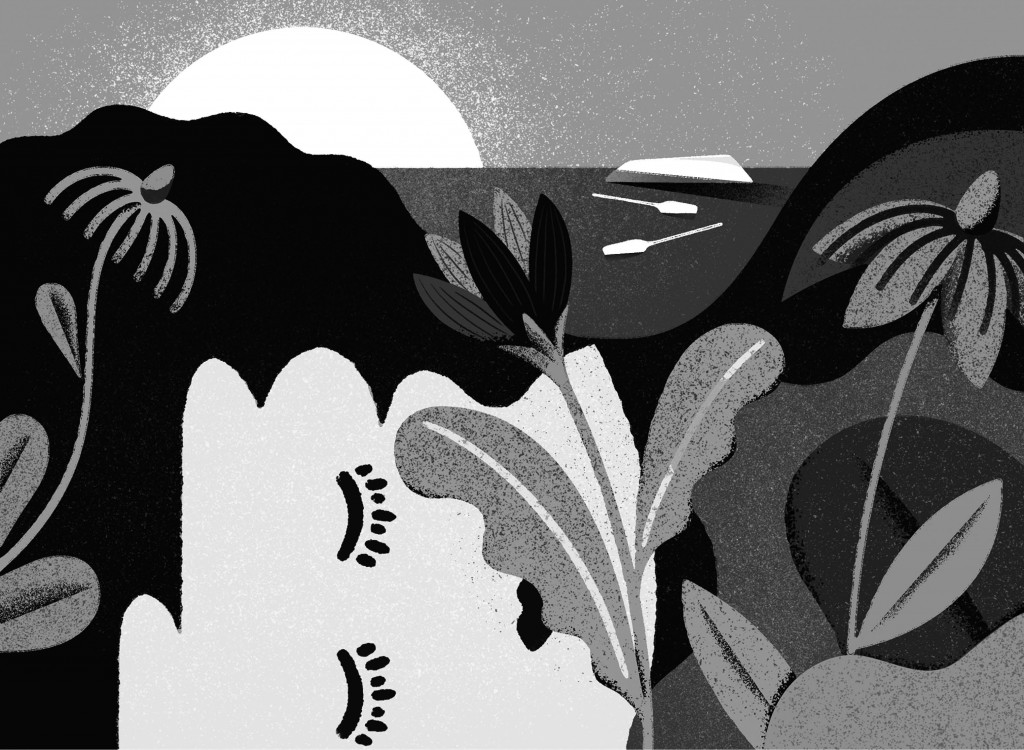 The story it tells is a vehicle for commentary.
Image by Karsten Petrat

The novel’s clunkier aspects are mitigated somewhat by the lushness of its prose. El Akkad has a gift for visual detail, occasionally complemented by epigrammatic flourishes. The ­chapters that document the beginning and end of Amir’s harrowing sea journey are easily the strongest. The sounds and smells of a dilapidated fishing boat overloaded with desperate passengers, the terror of drifting aimlessly in the pitch black — El Akkad renders this experience without laboriously explaining its significance. The action is engrossing. Death is palpable.

For the rest of the book, however, the author chews our food for us. The result is clumsy exposition, tension-deflating plot holes, flat characters, and wooden dialogue. Not content to relay characters’ feelings and observations, the omniscient narrator is prone to didactic interjections about history, war, and the meaning of arrival and departure. The descriptions, meanwhile, become lazy and repetitive: Amir’s uncle doctors a passport with “an air of ritual”; there is “an air of queer unreality” about the wreckage on the beach; Vänna’s father’s youthful appearance gives him “an air of ridiculousness”; the migrant holding centre has “an air of passive siege.” If someone expresses a particular world view in act 1, their archetypal counterpart will express a diametrically opposed view in act 3. Malevolence is tidily traced back to unresolved trauma. And it’s never made clear why Colonel Kethros, who appears to wield absolute authority over the island’s law enforcement, can’t intercept an unsanctioned ferry that docks once a week at a predetermined time on the northeastern shore.

Most implausibly of all, the characters in What Strange Paradise tend to deliver lengthy expository speeches at climactic moments. When the smugglers aren’t helpfully explaining why they use such rickety boats (“You think we’re going to risk the Westerners impounding the expensive ship?”), they’re eloquently holding forth on moral relativism. Although Amir is a traumatized boy with precious little grasp of what’s going on, other characters don’t hesitate to address him at length about politics. Because, ultimately, the people in this book aren’t speaking to each other — they’re speaking to you, the reader who has picked up an acclaimed book about a Very Important Subject, one in which technique doesn’t get in the way of ­righteousness and the damning image of a dead child is processed into an unthreatening cultural commodity to be consumed at a book club, with a glass of Chardonnay.

In contrast to the three-day timeline of El Akkad’s novel, the debut title by Brian Thomas Isaac, All the Quiet Places, spans a ­decade. It begins in 1956 in the Okanagan Indian Reserve, in southern British Columbia, where six-year-old Eddie Toma lives with his mother, Grace, and younger brother, Lewis.

While each of the long, episodic chapters revolves around Eddie, All the Quiet Places sometimes reads more like a collection of short stories than a novel. In one part, Eddie takes his mom’s hunting rifle and finds a hollow tree in the woods; in another, his family briefly migrates to California, where Grace and her friends spend the summer picking macaroni (harvesting durum wheat). Halfway through the narrative, Eddie’s dad shows up, done up like Elvis in a gleaming black car, after a decade of unexplained absence.

Looming over these developments are Eddie’s interactions with the white world. An Indian agent occasionally arrives at their home with small provisions and condescending remarks for Grace, who’s on a years-long mission to bring electrical power to the reserve. It’s no accident that the Toma family lives on the edge of the community: Grace decides to send her son to school in neighbouring Falkland rather than to the inadequate local school (where she went) or the church-run residential school (where her brother, Alphonse, was abused).

Although it’s a coming-of-age book, All the Quiet Places has the action of a Western. In addition to the fist fights — Eddie is the only Indigenous kid in his class — there are speeding cars, galloping horses, and plenty of gunfire. In one memorable scene, Grace chases down a car on foot and punches the driver through the open window.

Nevertheless, it’s the mundane details that give the novel its rich texture: the outhouse and slop bucket, the old stove that burns through armloads of wood, the tree scars that ooze pitch, and the shifts in the river where Eddie fishes with his grandma. The narrative subtly immerses the reader in Eddie’s life while maintaining a limited third-person perspective. We see what he sees and don’t know what he doesn’t know. Signalling across the chasm of his protagonist’s nascent understanding, the author builds ­tension and reveals his characters with minute gestures. When Grace introduces Eddie to his father, she rubs the back of her left hand with her fingers and nods to the man beside her. “Anyway,” she says, “this is your dad.”

Even though Eddie’s life is enmeshed in a seemingly boundless natural landscape, he is penned in by highways, cattle guards, and other barriers that conspire to keep him on the reserve. To catch the bus to school, he must cross a ­narrow, high-traffic bridge into town. If he doesn’t sprint, he could be killed by a tanker truck. “Make sure there’s no cars coming before you go across,” Grace tells him. “When the coast is clear, you run as fast as you can. You hear?”

But Eddie can’t help doing what he’s told not to do. As a kid, he touches an electric fence and plays near a bottomless slough. As a teen, he falls in love with a summa (from the Syilx word for a white person) despite his grandma’s ­warnings. So it’s only a matter of time before Eddie pauses on this dangerous bridge to look down at the water — that is, to face his conflicted ­identity head‑on.

Both of these novels are intrinsically political, but there is a grating artificiality to What Strange Paradise. The story it tells is a vehicle for commentary, which the action and dialogue painstakingly illuminate, and the characters are left out of focus, indistinct, slightly unreal. All the Quiet Places, meanwhile, is primarily a tale about people. The forces that shape their lives are evoked with the same clarity as the snowberry bushes and beaver dams, the Christmas concerts and smoky pool halls. The result is a heartfelt and absorbing work of art.

Bardia Sinaee is a poet in Toronto.