Michael Ignatieff is one of Canada’s chief intellectual exports. As a modern-day man of letters, he is a truly transatlantic thinker who gets too little credit at home for his various outputs, which comprise a bookshelf of some sixteen works of non-fiction, three novels, and two screenplays. The albatross of his political career, his urbanity, and his many postings abroad — from director of the Carr Center for Human Rights Policy at the John F. Kennedy School of Government, at Harvard University, to professor of history at the Central European University, in Budapest — were never going to increase his market value as a popular author. But his books are still worth reading, and reading well. His latest, On Consolation, is no different, though one can catch the twinge of lament when he writes that “it takes some time to accept the emergent sense of solidarity with the rest of humankind that begins to dawn . . . when you realize that your previous liberal protestations of abstract solidarity had been so false, when it finally hits you that you are yoked together with all others in a common fate.”

Consolation is the emotional balm that prevents us from reliving our most intense suffering. But if we remember nothing of our past, there is no need to console. Ignatieff has been deeply interested in memory for decades; it forms the basis of some of his best work, such as The Needs of Strangers, from 1984, and The Russian Album, from 1987, as well as his novel Scar Tissue, which was shortlisted for the Booker Prize in 1993. And that depth of knowledge makes for an engaging examination of how the sentiment we know as consolation came about — and how it has changed over time.

On Consolation takes as given that our feelings have a traceable past. How, for example, has sadness manifested itself over time? What about happiness? Grief? Emotions are mentally abstract yet physically tangible, indefinable yet definite. An emotional lineage is therefore hard to pinpoint, so any good detective needs a lead. Ignatieff finds his in language, as he tries to discern how seventeen great thinkers approached solace. Consolation can challenge the limits of communication: think of all those who, when in the doldrums, have muttered something like “I don’t know what to do” or “What do you want me to say?” But it’s certainly not mere back rubbing or tender fussing that concerns Ignatieff. As he puts it, “Comfort is transitory; consolation is enduring.” 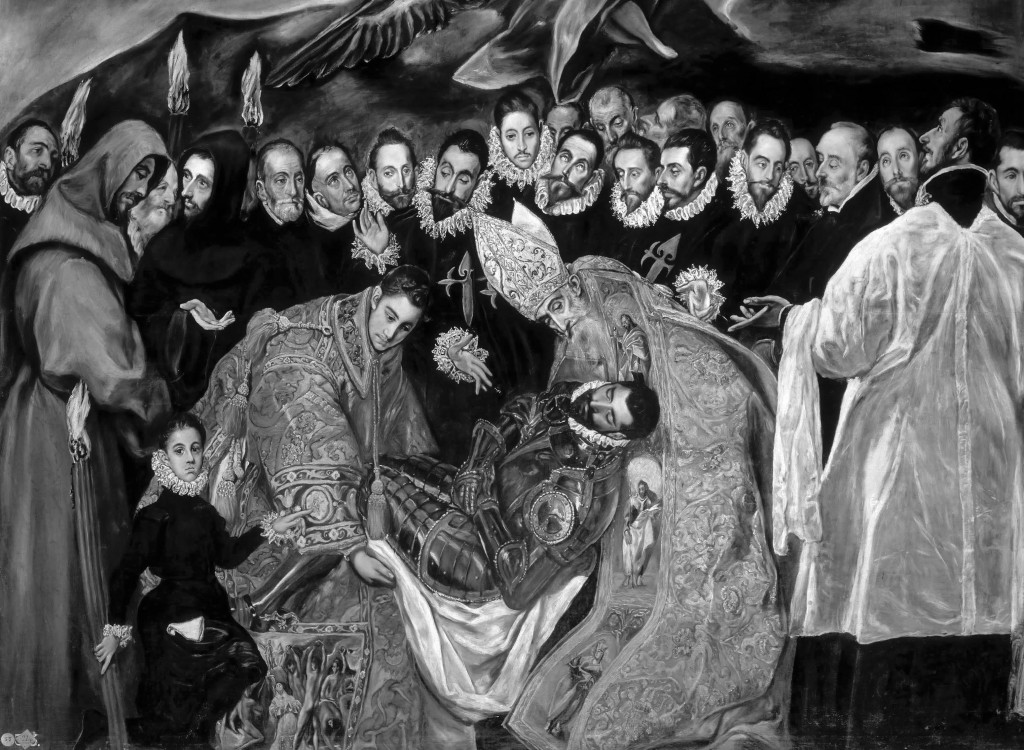 With one foot planted firmly in the past and another stepping into some better future.
Image by El Greco, 1586–88; Alamy

In tracking down the origins and applications of his subject, Ignatieff covers ground from the prophet Job to the philosopher Montaigne, then onward to the Czech politician Václav Havel. In its early religious sense, the concept was “able to situate individual suffering within a wider frame and to offer a grieving person an account of where an individual life fit into a divine or cosmic plan.” Increasingly modern and secular times, however, have required more. Whether the masses now find solace in science and politics is debatable, but Ignatieff argues the lack of a divine plan — or the lack of belief in one — has continually shifted where we look. “Consolation is what we do, or try to do,” he writes, “when we share each other’s suffering or seek to bear our own.” In other words, consolation is an active, not passive, accomplishment.

To a certain extent, On Consolation can be read as a list of extraordinary people who survived a litany of horrors. And how they managed to do so is just as varied: the peaceable emperor Marcus Aurelius wrote secret confessions on the battlefront, while the meticulous chemist Primo Levi recited poetry in Auschwitz. Others opted for the utilitarian, managing their grief by doing what they did best: the composer Mahler turned to composing music, and the painter El Greco dove into painting. There is no one-size-fits-all approach, and the tactics that soothe some do nothing for others. Time may have healed all wounds for Abraham Lincoln, but it left the widow of the Hungarian poet Miklós Radnóti, murdered by the Nazis, feeling hollow.

There is more to On Consolation than death, war, exile, and genocide. There is also inner ­turmoil, loneliness, and the realities of time. It’s the last of these — how we take stock of our momentary existence in history — that seems to provide the greatest consolation for many.

Time is something Ignatieff finds refuge in rather than from : “The recurrent subject of consolation is time itself — the fact that it goes one way and cannot be stopped, cannot be slowed down, cannot be reversed; that our losses ­cannot be made good; that the future is unknowable, the past is irrecoverable, and time for us ends in death, while it goes on for others as if we never existed.” Here he straddles a line, with one foot planted firmly in the past (with thoughts of El Greco’s The Burial of the Count of Orgaz) and one stepping into some better future (with an equal measure of hope and disillusionment). This style of thought is reminiscent of the English polemicist Roger Scruton, who, in 2000, told the Dutch journalist Wim Kayzer, “I think one of the saddest things about the modern world, partly the result of television, is that people live in a tiny time-slice of the present moment, which they carry forward with them. But nothing remains, and there’s nothing in their experience which reverberates down the centuries, because the centuries to them are completely dark. Just unillumined corridors from which they stagger into the single little sliver of light.”

Ignatieff sees the greatest meaning wherever one moment of comfort begets another — something he finds in Boethius and Dante, Condorcet and Marx, Max Weber and Primo Levi. And if Scruton’s dark corridors seem to extend forever, the sliver of light an ever-receding pinprick, Ignatieff is busy placing mirrors, trying to make the light bounce from one to another and illuminate the passage.

Even as his thinking has evolved in some areas, Ignatieff can’t help but be himself. On Consolation is clearly by that familiar writer of previous works — the one who is thoughtful and patient, somewhat bombastic, and slightly pedantic. (Ignatieff uses words like “eschatology” and “via dolorosa,” even though most of his readers probably don’t.) But he also shows considerable restraint in keeping himself to himself.

There is a mountain of self-help books on the topic of consolation whose authors, consumed by pathos, land instead on confession. The closest Ignatieff gets to the personal is in his final chapter, which centres on Cicely Saunders, the progenitor of hospice care and end-of-life dignity — things that have played an important role in his life. Even here, he doesn’t look for any solutions, just insight. Conceptualizing consolation as the antidote for misery is wrong, he explains, because “when suffering becomes understood as an illness with a cure, something is lost.” It may be that suffering is our unescapable lot in life or at least an inextricable part of it; we might all live in a constant state that Camus calls “outside Grace.” Consolation, then, isn’t a way to rectify that state but rather a way to come to terms with it.

Given the unfolding climate crisis, Ignatieff might have included thoughts on how we can console ourselves in the face of environmental catastrophe. As he points out, Lincoln’s “malice toward none” has been replaced in our day by “malice toward all”: leaders of all stripes seem intent on buck-passing and ideological cudgelling. But nature, in its ambivalence and brutality, will have the ultimate say. How to confront that fact would have been a particularly interesting subject, with no shortage of historical figures to consider, whether Henry David Thoreau, John Muir, or Jane Goodall.

Ignatieff makes mention of his book’s Eurocentrism in the introduction, and indeed one can’t help but notice the lack of other voices. Consider someone like the Nigerian writer Wole Soyinka, who finds consolation in hunting, or Nelson Mandela, who used exercise to keep his mind sharp on Robben Island. These are but two thinkers — hardly unfamiliar to Western audiences — who point to the globally cohesive power of consolation, to the transcultural fullness of the sentiment.

Nonetheless, On Consolation offers a ­powerful message for a world that can seem bereft of meaning, a world in mourning and playing ecological craps with weighted dice. Ignatieff ends on a hopeful note: “Consolation is always a gift,” one that “makes our lives worth living.” Whether we look for a path back to where we were before the pandemic, or directions to someplace new, we can do so the way Ignatieff’s subjects did: through work, through pleasure, through music and literature. That is our universality. There is consolation to be found everywhere, because, with the wind of history at our backs, we are never truly alone.