Crisis in Canada’s Policing: Why Change Is So Hard, and How We Can Get Real Reform in Our Police Forces

Anyone who takes a principled stand on a matter of public debate is bound to make enemies, and it would be an understatement to say John Sewell made some among the police during his time on Toronto City Council, which culminated with a short stint as mayor from 1978 to 1980. The police union hurled homophobic slurs at him for defending gay rights, labelled him a “cop hater” for criticizing law enforcement killings, and published a cartoon of a uniformed officer discarding his body in a garbage can when he lost his re-election bid. In other words, Sewell was a politician ahead of his time.

After being voted out of the mayor’s office, Sewell taught a class on policing at York University and published his first book on the topic, Police: Urban Policing in Canada, in 1985. He also helped found the Toronto Police Accountability Coalition, which he has coordinated for two decades. Indeed, his latest book, Crisis in Canada’s Policing, with research support from Christopher J. Williams, follows more than a half century of work aimed at reshaping law enforcement in this country.

Now in his eighties, Sewell is the first to admit his efforts to date have led to few ­changes, if any: “The police do not like to think about change or alternatives, and they challenge or deny every suggestion for how things might be done differently.” But following the murder of George Floyd, under the knee of the Minneapolis police officer Derek Chauvin, on May 25, 2020, the door to real, tangible change has opened. After decades of denial — and the dismissal of policing critics like Sewell as pie-in-the-sky ­radicals — some parts of society now seem willing to confront the problem head-on. 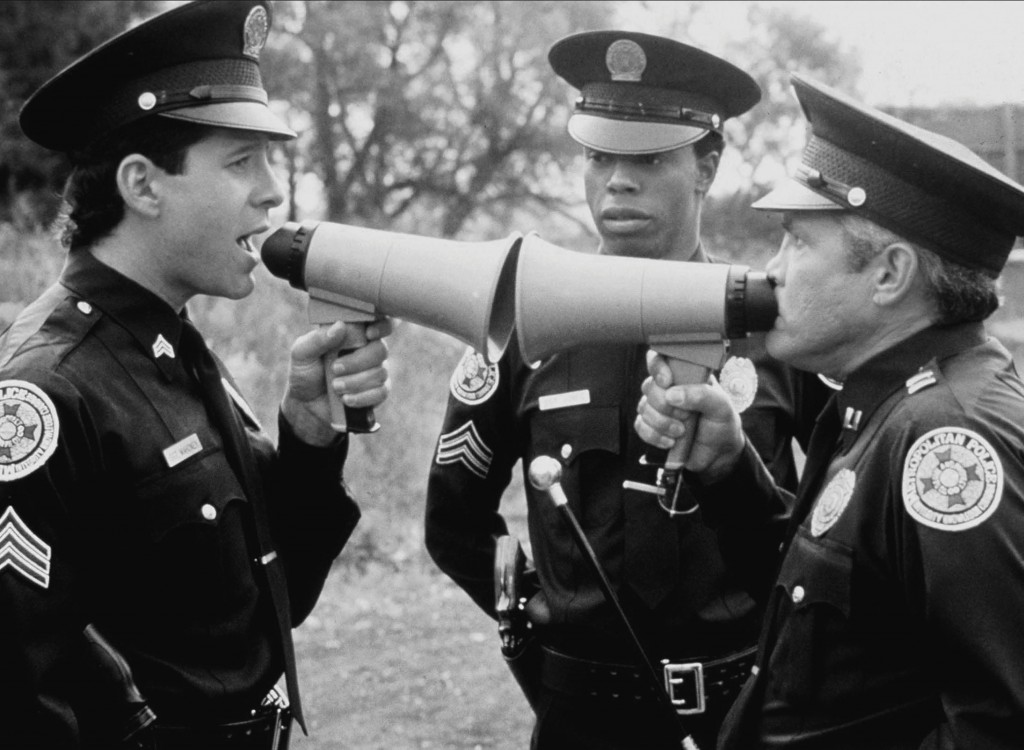 But will they listen?
Image by from POLICE ACADEMY 4; AA Film Archive; Alamy

Sewell’s book is divided into six chapters, some wide-ranging and others focused on a single topic. While the former mayor is not a great stylist — the prose is plodding and workmanlike — he nonetheless synthesizes a range of research and reports in an accessible fashion.

This is a man with a message — and he wastes no time getting to the point. He details a laundry list of problems within police departments: systemic racism and sexism, an insular and toxic culture, patterns of excessive force, a perception of the dangerousness of the job among the rank and file that does not match reality, “thin blue line” solidarity, the rejection of civilian oversight, weak and opaque disciplinary procedures, strong unions that protect bad cops, and so forth. He also identifies some long-term trends that contributed to this mess in the first place. For example, Sewell points to the deinstitutionalization of residential mental health facilities in the 1960s — a move that was not coupled with increased funding for community-based supports — as one reason we’ve seen a massive spike in calls to the police about people with mental illness. Is it any wonder so many Canadians are shot when people with guns and warrior mindsets are sent into volatile situations involving individuals in crisis, he asks.

Sewell’s main argument is that the crisis in policing boils down to dysfunctional attitudes that, unless fixed, will frustrate all other efforts at reform. And while there are other changes that must be made, we certainly don’t need more studies on this issue. After all, elected representatives have a long history of announcing reviews on hot-button topics to buy political cover so they can avoid making tough decisions. “More studies simply represent delays and a refusal to act,” Sewell writes. We already have the necessary evidence-based public policy proposals. What is needed now is action.

That said, some of the more talked-about fixes would have little practical effect. Body cameras have been rolled out in some jurisdictions, for example, but the research on them is sketchy at best. What we do know is that cameras have limited impact on police behaviour. And while critics have asked for more training among officers, Sewell argues that’s not nearly enough: “Culture eats training for lunch.” Even calls to diversify police departments, while noble, will accomplish little until the underlying way of doing things is changed. As it stands, unless new recruits submit to the dominant culture — and thereby reinforce it — they are simply ostracized.

So how do we solve the problem? Sewell is not short of recommendations, and a significant one is that police boards and other mechanisms of civilian oversight must be overhauled. Existing agencies are largely toothless, with limited ability to hold bad cops accountable. “There is not a police board in the country that does an effective job,” he writes. “Thus there are no currently existing models for making the board an effective mechanism.” A good first step would be to restaff such bodies, while ensuring they are predominantly composed of leaders from marginalized communities. Going forward, the people who oversee the police must be those directly impacted by biased practices.

He also argues that general patrol officers must be disarmed. This move would put Canada in line with nineteen other countries, including the United Kingdom. While weapons could still be carried by supervisors and emergency response teams, who could be dispatched to particularly volatile situations, the reality is that being a cop in this country is not that dangerous. From 2016 to 2018, four of our nearly 69,000 officers were killed on duty. Those deaths are tragedies, no doubt, but being a roofer, a line worker, a truck driver, or a farmer — among many other professions — is significantly more dangerous than police work. “The number of times a year a gun is fired by a large city police is in the single digits,” Sewell points out. “Yet more than two dozen people a year are killed in Canada because of police shootings.”

Sewell sees a good model in British Columbia, which has implemented pre-charge screening, a process that requires Crown prosecutors to sign off on criminal charges before they are laid. There are undoubtedly potential problems ­associated with this proposal — prosecutorial overcharging is common in Canada, and prosecutors often have cozy relationships with the officers who build their cases — but the move would add another layer of necessary oversight.

As so many have demanded, departments must also be de‑tasked and defunded. This is not the same thing as abolition, Sewell adds, but it is clear that cops need not be the ones responding to the vast majority of the calls they receive, including reports about persons with mental health issues, homeless people or youth and requests for well-being checks. Nor should police officers be conducting traffic stops, Sewell maintains. Instead, such tasks would be ­better handled by non-armed, community-based ­services, an approach that would have the added benefit of saving taxpayers considerable expense.

“The crisis in policing boils down to dysfunctional attitudes that will frustrate all other efforts at reform.”

These proposals, among the many others that Sewell outlines, are concrete steps that could be taken in the here and now. However, as he also notes, the real question isn’t whether such reforms would work but whether there is sufficient political will to make them happen: “The significant issue here is not the effectiveness of these other approaches, but rather whether it is politically possible to make such a large reduction in the police budget for reallocation, even if it is for a good cause.”

The obstacles to change are many — chief among them that toxic culture and those feckless politicians who are more concerned with ­re‑election than with necessary reform. And more needs to be done to combat the myths prevalent among the public — largely promoted by police unions and departments — that law enforcement funding affects crime rates. The truth is the vast majority of those dollars, roughly 80 percent, is eaten up by generous salary and benefit packages. Criminologists of various political leanings have long shown that, whatever the amount, money spent on the police has little impact on levels of social transgression.

As the headlines have reminded us with some regularity, the United States saw a 30 percent rise in homicides in 2020, which apologists for the status quo have pinned on Black Lives Matter and other efforts to defund the police. More research is needed to fully explain the spike in violence, including the strong possibility that the pandemic and record gun sales were significant factors. But what is clear is that a recent rise in homicides cannot be blamed on police reform: the trend began before any department had its budget reduced, and it was seen in nearly every major American city, both blue and red.

As a reporter for the Winnipeg Free Press, I have spent considerable time investigating the conduct of the police and the agencies tasked with oversight. I have learned that the ­destructive role that unions play — by siphoning ever more funds from the public purse, by protecting bad cops, by fighting against reforms — cannot be overstated. This perspective suggests to me that Sewell should have spent even more time on the issue of labour. Nonetheless, his book is an excellent primer for those interested in learning about the reality of policing in Canada.

“The more you learn about what police organizations do,” Sewell writes, “the more worried you become.” But however worried they may be, policy makers and citizens alike must come to understand that policing is downstream from crime. While downstream responses are undoubtedly important, we must invest in the upstream root causes if we wish to make progress. This can be accomplished only by ­de‑tasking and defunding the police, so that money from their bloated budgets can be used to fund healthy communities. People like Sewell — and, quite frankly, people like me — are often dismissed as unreasonable and out of touch. Canadian police have complained that they are facing unfair levels of scrutiny in the wake of George Floyd’s murder. But the reality is that the police have been under far too little scrutiny — by the press, the public, the politicians and academics — for decades. What is needed now is more scrutiny, not less.

Back when Sewell was making enemies among the police during his time on Toronto City Council, he was characterized by many as a “radical.” But, as he notes in the concluding passage of Crisis in Canada’s Policing, his opinions are now “comfortably part of the mainstream.” The Overton window on this issue has shifted. If nothing else, there is hope in that.