Imagine, if you will, that the small city of Terre Haute, Indiana, is home to a massive Dante-inspired theme park. The communities that surround the place are beyond depressing: closed storefronts, dilapidated houses, entire districts ravished by the opioid epidemic. But the structure itself is impressive, built from two retrofitted sports arenas connected by an underground tunnel. Visitors begin their journey in the Inferno, which is all ice and fire and headless demons that sell candy and hot dogs, as a roller coaster whizzes overhead. Once through the tunnel, they hear trumpets and French horns sound and marvel over “glowing constellations and laser lights” that fill the concourse. Welcome to Paradise.

The creation of this fictional park is the narrative backbone of Randy Boyagoda’s Dante’s Indiana, the sequel to his Original Prin and the second title in a planned trilogy. A satirical romp through contemporary America, the novel takes on the pharmaceutical industry, capitalism, and the academic world. At the same time, Dante’s Indiana is a love letter to the Italian poet and the power of social movements. As it follows Prin’s dealings with this unusual venture, the book is highly readable, highly enjoyable, and, like all good satire, highly insightful.

Prin is a middle-aged, Catholic Sri Lankan professor who specializes in “representations of sea life in Canadian literature.” His work has appeared in such publications as PMLA — not the illustrious journal but Papers in Marine Literature and Art. While Original Prin is set in Toronto, the majority of Dante’s Indiana occurs in the United States, mostly in Terre Haute but also in Wisconsin, where Prin’s wife, Molly, who is nominally separated from him, has taken their kids to live with her sister. The biggest structural change between the two books is the switch from a tight third-person narrative to the first person. Readers are now deep in the protagonist’s head, which partly explains this novel’s slower pace compared with that of its predecessor, as well as its fewer laughs per page.

Unfortunately, due to the events of the previous story, Prin’s academic career has taken a nosedive. He is now teaching seminars to the residents (who include his divorced parents and their partners) of the Toronto old-age home that purchased his erstwhile university. He’s also living there while his house is being renovated. Bored and looking for extra funds to build a pool — with the hope of luring back Molly and the kids — Prin accepts a one-year contract to advise the Christian millionaire (and Dante obsessive) Charlie Tracker on his Inferno park. Charlie’s son, Hugh, who now runs the family packaging plant, wants Prin to keep his father occupied with his “retirement project” so that Hugh can do what he wishes with the business. 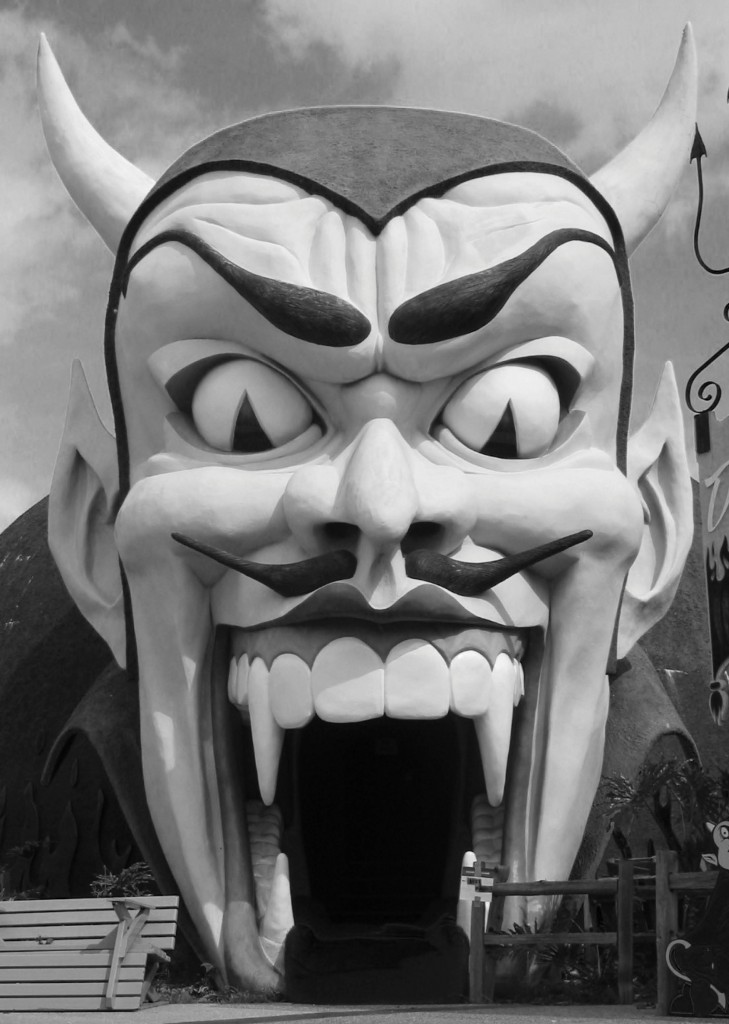 A mouthful of controversy.
Image by Marktippin; Wikimedia Commons

The machinations and power struggles between father, son, and firm play out with familiar intrigue. Hugh needs Prin to spy on Charlie; Charlie needs Prin to control the uptight Dante scholars attached to the project. As he helps to move the park design along, Prin befriends Justine, the Black project manager whose father worked at Tracker Packaging, and Frank, another former factory employee, whose daughter is addicted to OxyContin and has been missing for two years. Meanwhile, Prin’s marital troubles — which stem from the events of the first book, especially an illicit kiss with an ex-girlfriend who is killed in a terrorist attack in that novel’s climax — ebb and rise throughout. (This part of the plot is the least developed, its denouement somewhat disappointing.)

When Hugh makes a deal to produce cheap drugs with Jagiellon Capital — the Eastern European company that happens to have financed the park — things hit the fan. It’s a powerful indictment of late-stage capitalism, and a terrible irony, that the business keeping the town afloat also manufactures the drugs that are destroying it. The thematics of The Divine Comedy — where people are either punished or rewarded for what they do in their lives — ­resonate as the characters contend with the forces of class and material desperation.

Meanwhile, the Dante attraction slams into a controversy of its own when it collides with the racist geography of contemporary America. Justine finds out that the main draw — a roller coaster that features a demon’s black-painted face — will be called Geryon, a name suspiciously similar to that of Garyon Jackson, a young Black man who was recently murdered by the police. After Charlie refuses to change it, she quits: “You say Garyon Jackson’s murder is none of your business and you want me to work at Jurassic Jesus Park?” As the only character willing to stand up for racial justice, Justine has a heavy load to carry. Yet Charlie won’t budge. In fact, he does the worst thing one can do in such a situation: he hires a PR firm. A massive protest movement, as well as a counter-protest, ensues. As Prin describes it, the city “was now being attacked and defended for hosting a company and a theme park dedicated to celebrating dead white males and dead black males.”

Despite the fertile ground, the novel’s social commentary could have been pushed further. Boyagoda’s obvious love for Dante at times overwhelms the narrative and dilutes the satire. Nevertheless, the writing remains sharp and frequently hilarious: Prin meets Charlie for lunch one day at “the private dining room of a dry-goods factory that was now a museum of a dry-goods factory.” The engine of an old car sings “like Eddie Vedder.” Molly’s sister’s house, full of children over Christmas, “sounded and smelled like a waffle factory under attack.” Hugh grins “like someone was pulling a coat hanger through his mouth.”

In the end, when Prin returns to Toronto and to the old folks’ home, his elderly students ply him with questions about life in the U.S., asking “whether the people, the arguments, the portions, the handicapped parking, everything, were really as big and scary as they looked on television.” Perhaps Boyagoda provides the answer earlier, when Prin visits a different amusement park that has fallen into neglect: “The whole operation, the whole place, the people, the time: everything had felt out of joint with itself, busted, broken, stuck. But it was still going, like a still-ticking smashed-open clockworks.”

In Original Prin, it was academia, corporate sellouts, and the hilarity of ideological rigidness that captured Boyagoda’s imagination. In Dante’s Indiana, it’s the smashed-open clockworks of middle America. Whatever Prin gets up to next, one thing’s for sure: it’ll be a hell of a ride.