It is December 5, 1951, in a remote area of the Subarctic, “the most beautiful location on the face of the Earth, northern Manitoba where it meets Saskatchewan, the Northwest Territories, and what, since 1999, has been called Nunavut.” The Cree caribou hunter and dogsled racer Joe Highway — along with his wife, Balazee, who is pregnant with their eleventh child, and four of their kids — is travelling by ootaa-paanaask in minus‑40 weather from their traditional hunting grounds to their home base, the village of Brochet, Manitoba. Being Roman Catholic, they intend to celebrate the Christmas season with their extended family and to replenish their supply of food and other staples. Most of the Highway children were born in snowbanks on various lakes, and their mortality rates were high. How this memoir’s opening scene turns out is spellbinding, coloured by tension, violent comedy, and thrilling heroism before culminating in the arrival of the future memoirist, born two-spirited (“not male, not female, but both”) on the Feast of St. Nicholas (December 6), which is why and how it gives him “so much ­pleasure to explain to the world my favourite activity, which is laughing,” something he proudly shares with “the King of Laughter: Saanchi Giloss in Cree, Santa Claus in English.”

Another distinctive quality marks the book’s dramatic start, for Tomson Highway, a man of many talents, interrupts his story from time to time to act as an eager, diligent guide to the Cree world of landscape, history, sociology, mythology, and mores, mixing narrative voices and tones, while always exhibiting an existential optimism even in the shadow of pain and tragedy. In his author’s note, he describes Permanent Astonishment as “a shape-shifter book, residing in the space between fact and fiction, the fantastical place of memory and dream. It is a book imagined — and written in my head and in my heart — in what surely is one of the most joyful and funniest languages on Earth.” And he provides a bounty of evidence of this joy, beginning with numerous monikers that bring to mind the characters of Damon Runyon’s short stories: Meat Toss Yazzie, Happy Doll Gaazayoo, Salad Kipawm, Samba Cheese Weetigo, Archie Mosquito, Half Ass Sam Well, Mist Ass‑Lick Beksaka, and, of course, Tomson Highway, whose name sounds like an address.

It is easy to think such comic exoticism is too broadly satiric, but, as Highway points out, these appellations are mainly a hysterical result of rudimentary phonetics and mis­pronunciation, his native tongue being a “Trickster language.” Traditionally, Highway explains, anomaly and incongruity are not problems to be resisted but elements to be enjoyed, as when his beloved younger brother Rene (three at the time) is found peeing within earshot of Father Cadeau’s celebration of the Eucharist; or when a runaway sled with baby Rene aboard is stopped by their mother’s extraordinary strength and the dangerous incident is then celebrated with ­levity; or when infant funeral rites are joined by the “usual straggle of nosey onlookers including, inevitably, the notorious throat-clearing, phlegm-spewing, Libby’s-brown-beans-tin-can-as-spitoon-carrying Jean-Pierre Yazzie who loves funerals, weddings, and baptisms and has nothing better to do with his time than attend them.” Even death is “not a tragedy but a show, an extended entertainment. Until, that is, my mom’s first cousin, Flora Kamaa‑magoos, dies not of TB, as it turns out, but of thyroid ­cancer . . . , leaving behind her eleven heartbroken orphans aged twenty-four to two.” 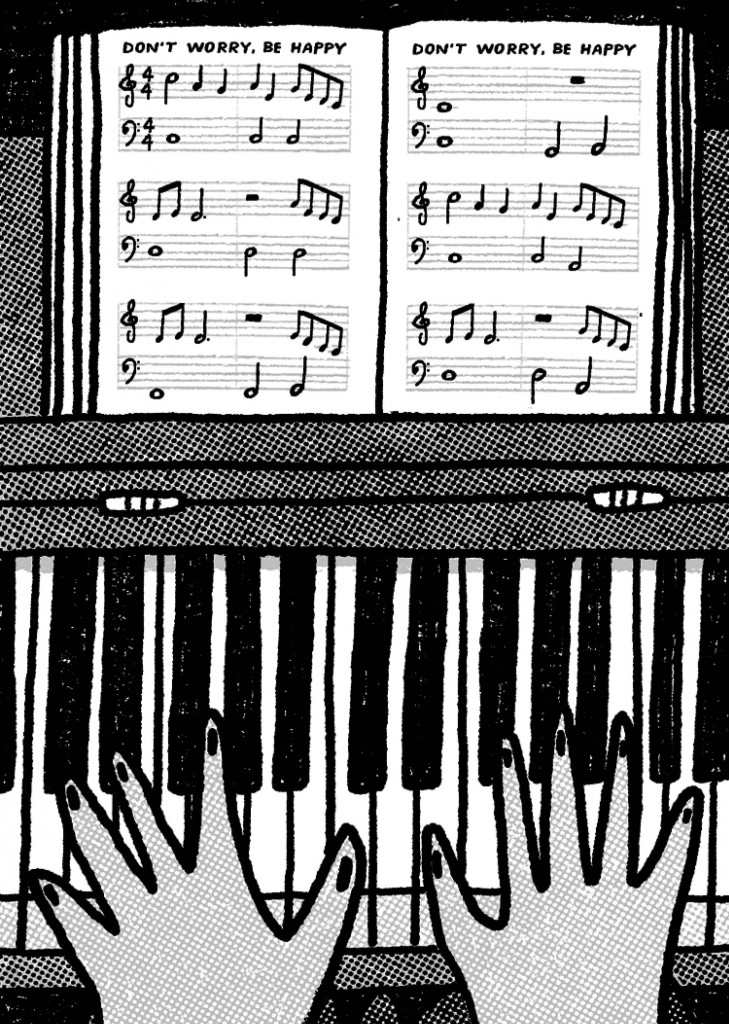 To be sure, there is much laughter in a memoir that relishes an idyllic Far North childhood, where the author, surrounded by love in a mesmerizing place that is “the world’s best-kept secret,” relives his pleasure of sucking juices from roasted muskrat tails, singing country music with his beautiful older sister and her teenage friends, going off joyously to residential school each year, and then reuniting with his cherished family for the summer. Permanent Astonishment is not ­simply a title; it is an existential attitude, a way of observing and reacting to land, life, suffering, death, ­triumph, the ­cosmos. The narrative is a radiation of the author’s own personality and ­psyche. “Far too often have I wished that I was blessed with a name like Bill Johnson, Bob White, Ron Cooper, or Mstislav Michiskovich,” he writes. “But no, I am just bizarre, unusual, ridiculous, multilingual, optimist unstoppable, laughter-loving, piano-playing — and utterly unique — Tomson Highway.”

Such a celebratory attitude was seen as far back as Highway’s award-winning plays The Rez Sisters, which was premiered in 1986, and Dry Lips Oughta Move to Kapuskasing, from 1989. His upbeat, sanguine humour stems radically from Cree teachings, which view life as an unbroken circle, a self-rejuvenating force. Highway impresses upon the reader a kind of Indigenous Divine Comedy, where his titular “permanent astonishment” is a leitmotif. The comedy issues from some of the characters and events and creates the book’s overall structure, which emphasizes a happy closure. It is not divine in the sense used by Dante or Hugh Hood, nor is it orthodox theology. It is divine in that it portrays humans as pilgrims who are continually tested, physically and spiritually, before they can claim triumph or grace in a universe granted by the gods.

From his first paragraph to his final chapter, Highway is fond of superlatives. His father, whom he adores as a “world-champion dogsled racer,” is idealized physically and morally: “Six feet tall, straight-backed, square-shouldered — a bull moose with antlers surveying his kingdom from a hilltop,” with his eyes revealing patience, kindness, and humility. Joe Highway shows the deepest “respect for God, respect for Man. Never does he have an unkind word to say of anyone; if something or someone peeves him, a dark cloud floats across his face and then is gone.”

Tomson Highway seems to love all his family deeply, but a special place is reserved in his heart and memoir for his talented but ill-fated brother Rene, whom he glorifies as “the most beautiful man ever to walk the face of this planet.” It is the spirit of Rene, the youngest of twelve, that hovers like an angel over these pages, ensuring that an ugly, dark shadow from the past is barely felt by the end. It is the shadow of sexual abuse and exploitation at residential schools.

Permanent Astonishment includes some hints of this sordid history at Guy Hill Indian Residential School on Clearwater Lake, more than 400 kilometres south of Brochet, where a sexual predator “ends up stealing the ­bodies of one hundred boys ten times each, at the very least.” Of course, there are horrific consequences for the boys, who grow up ­dysfunctional and confused, not knowing how to love, violent to the point of self-destruction. Highway recounts a disturbing experience at the hands of this man, but the incident comes almost three-quarters of the way into the book and is tamped down by a benign qualification: “As in every line of work, not all Brothers are virtuous. Brother St. Arnaud and Brother Menard were saints and we loved them dearly, as they did us. Brother Felix Lemoine was not.” Moments later, he asks,

Reflecting a charitable forgiveness more than a Pollyannaish view of reality, such passages consolidate a dominant tone in the memoir, anticipated, perhaps, by its dedication: “For all the families who have undergone an experience such as is described in this book, my heart goes out to you.” But Highway’s words are rather lame, considering the pain and eventual fate of Rene and countless other Indigenous youth who suffered psychological torment and disease, often resulting in suicide or death by AIDS. It is a pain that Highway cannot easily assuage.

He did address this subject in Kiss of the Fur Queen, his novel from 1998, but perhaps his reticence here is a result of Rene’s deathbed urging taking hold. A brilliant dancer who succumbed to AIDS in the prime of his life, in 1990, he uttered these final words to his brother: “Don’t mourn me, be joyful.”

Permanent Astonishment embraces this message wholeheartedly, sometimes at a literary cost, as when Highway insistently pauses in the middle of a tale to describe, at length, some historical detail, ritual, or activity, refusing to desist in the interest of sustained storytelling. But maybe I am overlooking Highway’s purpose and thrust. As he told me in 1991, during an interview in Toronto when he was the artistic director of Native Earth Performing Arts, “What I like to do is take a real situation and mythologize it, make it larger than life, twist it and exaggerate it so that it becomes magical.” Highway is certainly consistent in this aim, viewing his land as a godly kingdom, feeling blessed by what is given to him, despite immense hardships and challenges to survival and his own virtues. Ultimately, he expresses how one should live, whether Cree or Moony‑ass, in other words Caucasian. In providing details about his past, Tomson Highway has written a book that helps educate the human heart, enlarging a sense of human possibility or inwardness — subjects as vital to fiction as to real life.