You might think of Leonard Olive Keith and Joseph Austin “Cub” Coates as New Brunswick’s Tom Sawyer and Huckleberry Finn — but a queer Tom and Huck. That notion will certainly cross your mind when reading Len & Cub, a poignant collection of archival photographs that capture them having Twainesque adventures around Butternut Ridge, now known as Havelock. Throughout the book, they appear a besotted couple, bound by an unlawful passion rarely documented so openly a hundred years ago. Using Len’s trusty Kodak, they would take photos of each other, as if declaring their romance in a world that, for a time, blissfully ignored them.

That’s how things seem today anyway. We assume these fellows were in love, but we’ll never know the exact nature of their physical relationship. Is it prurient to wonder if they went all the way? Their families, at least, were too busy trying to make a go of it in tough times to care what the boys were doing on hunting and fishing trips, especially if they did their chores and stayed out of trouble. Besides, who in rural Havelock would have known anything about such perversion? Even I recall when “boyfriends” could refer to guys who were just best friends, with no arched eyebrows or snickers when the word was said. Then again, Len never married, and there are also photographs of him après Cub that ping one’s contemporary gaydar. Len must have been queer! Maybe Cub was too. Or was he going through a phase, gay for the stay, bisexual, non-binary, starved for affection, or whatever?

It’s a miracle these photographs have survived. In 1984, a Havelock resident named John Corey purchased some albums — Len’s albums — at a Keith family estate sale. Corey’s father had gone to school with Len, and he had told his son stories about his classmate and Cub. Years later, in 2011, Corey donated the albums to the provincial archives and described the two amateur photographers as “boyfriends.” An archivist took note of the word and the fact that Len had been “driven out of town for being a homosexual.” With these clues, Meredith J. Batt and Dusty Green, themselves experienced archivists and co‑founders of the Queer Heritage Initiative of New Brunswick, set out to write Len & Cub. 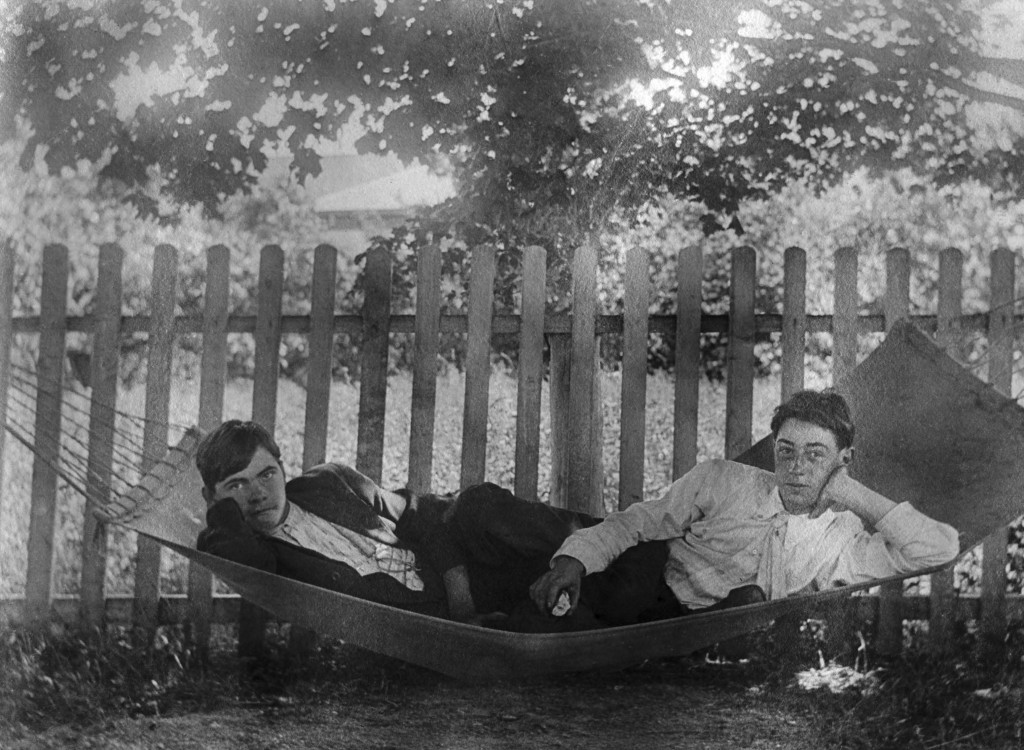 A remarkable collection of photographs.
Image by Courtesy of the Provincial Archives of New Brunswick; Goose Lane Editions

Although they must have known each other from childhood, given the size of their village, it wasn’t until 1914 or so, after Len had returned from Tilton School, in New Hampshire, that he intently trained his camera on Cub. Len’s family was prominent and relatively wealthy in a not so prosperous community; the Keiths had a large property for rendezvous and a car for day trips. Cub’s family was hard-working and respectable but had little cash. This is not E. M. Forster’s Maurice or Evelyn Waugh’s Brideshead Revisited, though there is a class aspect to the story. Another facet, one not explored by Batt and Green, recalls Gerald Hannon’s notorious Body Politic article “Men Loving Boys Loving Men,” from 1977. Len was a twenty-three-year-old hanging out with a fifteen-year-old. These were intimate photographs of a young man and his adolescent friend.

At the outbreak of the First World War, both Len and Cub joined the army, training together at St-Jean-sur-Richelieu, Quebec, and taking snapshots of each other when they could. Service sent them in different directions, and when they were eventually reunited, things weren’t the same. Maybe war changed them. Or maybe Cub simply grew up and didn’t want an older, dominant guy — a daddy — as a boyfriend. Either way, he began to drift away, so much so that he “remained seemingly untainted by scandal” when Len was dramatically outed.

Len fled to Vermont at first, in 1931, and ended up in Montreal. He had called Havelock home for nearly forty years. He had been tolerated, maybe even accepted, when he ran a service station and pool hall where young lads drank. But then he threatened the livelihood of a few straight neighbours when he showed an interest in fox farming, “an extremely important and competitive industry in the 1920s and 1930s.” If a gay war vet was somehow okay, a gay business rival certainly wasn’t.

Len and Cub’s story doesn’t have an uplifting final act. It’s not entirely clear what Len did after he was outed — the “trail goes cold”— but he never returned to Havelock, and the local newspapers made no mention of his death, from liver cancer at the age of fifty-eight.

Cub, meanwhile, was married at forty-one, to Rita, a thirty-eight-year-old nurse. When a new war erupted, he volunteered to serve once more. Was he motivated by a sense of duty or a desire to escape, however temporarily, the strictures of heteronormative life? Afterwards, he had a few failed business ventures and some health issues, but he eventually found himself in the world of horses, becoming “well known in Maritime harness racing circles.” Cub and Rita had no children, but they were married for twenty-two years, until her death. He died at sixty-six.

Forget about differences in age, sexual identity, historical context: a book like Len & Cub should be about two people who found each other in a bucolic setting for a blissful moment. Perhaps they never again felt a personal connection so strong. To apply twenty-first-century notions of sexuality and gender to their story, as Batt and Green have done, risks overshadowing the fragile humanity of their relationship, risks skewing a visual celebration of love’s resilience. The unapologetic gaze of Len Keith and Cub Coates endures in these amazing photographs, regardless of how we interpret their lives today.