Martha Wainwright has one of the most expressive, distinctive voices in the pop music pantheon. In it you can hear echoes of her famous parents, the performers Loudon Wainwright III and Kate McGarrigle, and hints of her brother, Rufus, the crooner, but its beauty has an unpolished aspect all its own, one that can surprise with its raw edge.

If only the singer’s narrative voice were so singular. In her slim memoir, Wainwright does get raw, dishing enough surface dirt to keep rubberneckers engaged. Despite the ample sex, drugs, and rock ’n’ roll, though, Stories I Might Regret Telling You is more bluntly revealing than reflective. Her candour and conversational style are appealing, but there’s a faint yet persistent tone of petulance or self-pity that undermines the book’s more touching moments.

From the first page, Wainwright sets herself up as an underdog with the revelation that her father had encouraged her mother to get an abortion when she was pregnant with Martha, who was born in May 1976. “I was surprised when Loudon told me this story, and it also hurt my feelings,” she writes. “I had always felt a little out of place in the world, and knowing that I’d only just barely made the cut didn’t help matters any.” 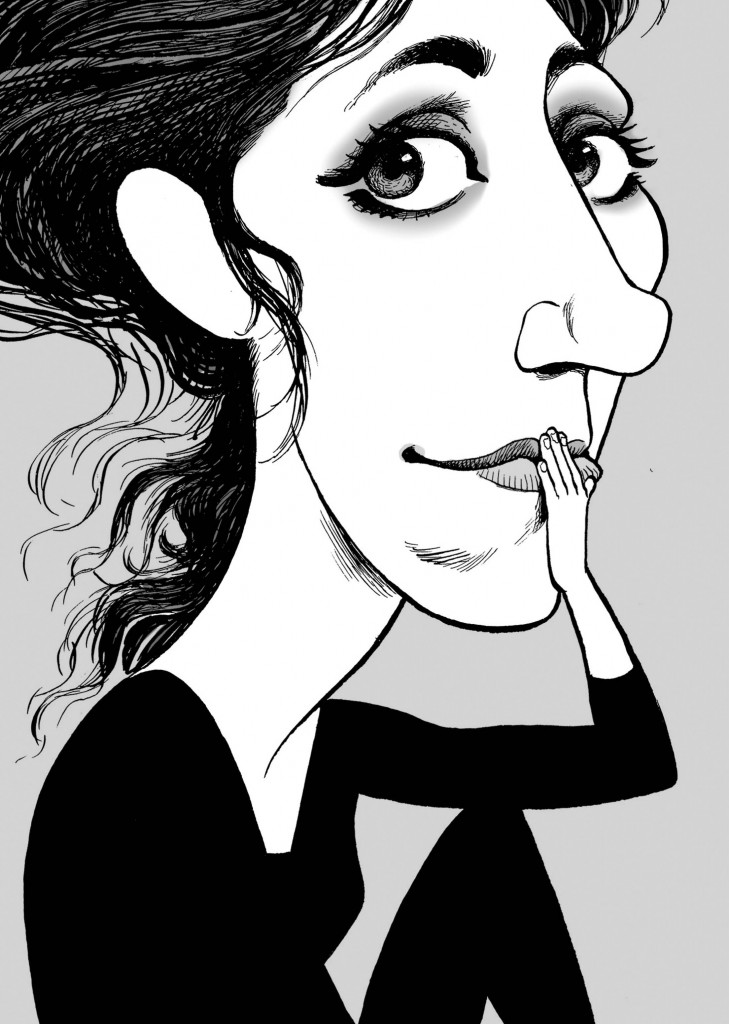 She’s got feelings too.
Image by David Parkins

That sentiment informs every chapter of this rambling life-so-far story, in which Wainwright refers to herself as “average across the board, really. Average in height and weight. Average at school. Average number of boyfriends. Average in looks and average in sports. Average in everything. I was definitely not used to being different or outstanding.” Such self-effacing assessment might be genuine, but it certainly comes off as disingenuous as the singer half casually details the world stages she’s played on, the beautiful, talented men she’s bedded, and the music career she’s carved out — perhaps not as starry as those of her brother, mother, and father but widely recognized with both critical and popular acclaim — all the while reasserting her inferiority, her unattractiveness, and her self-doubt.

She is a tangled web of contradictions. Aren’t we all, of course. But the eye Wainwright casts on herself is so at odds with the gifts — both literal and metaphorical — she’s been given that her memoir feels frustratingly myopic.

To be fair, Martha Wainwright comes by some of those contradictions honestly. Her American father is descended from the well-heeled Stuyvesant family, but that WASPy, moneyed side is countered by her mother’s earthier, Catholic, French Canadian side, which held more sway in her upbringing. One of the book’s more heartfelt passages recalls times that Wainwright spent with her maternal grandmother, Gabrielle, known as Gaby, at a rustic family compound in the skiing village of St‑Sauveur-des-Monts: “Everyone in my family still counts on the place to welcome us and comfort us and smooth us over whenever we’re feeling down.” She would eventually hold her wedding there.

Wainwright was born in New York State but grew up in Montreal with her mother after Kate and Loudon split up. Their big house in Westmount was filled with musicians, many of them family members, including Kate’s sister and singing partner, Anna. Later, Kate bought a three-storey home in Outremont, in which she and her grown children had apartments of their own. Martha eventually returned and lives there to this day.

In between, however, she had a wild life, often fuelled by alcohol, drugs, and, she admits, bad taste in men. Perhaps that’s not fair: The men weren’t bad, per se. They were just bad for her. At twenty-one, she fell madly in love with the singer-songwriter Dan Bern after meeting him at the Philadelphia Folk Festival, where she was singing with Kate and Anna. He was seventeen years her senior. Not surprisingly, their relationship didn’t last, and Bern essentially ghosted her after a year of good times. (His song “Smartie Mine,” from 1998, was written for Wainwright.)

Anecdotes like this pepper the book, but Stories I Might Regret Telling You falls prey to the frequent pitfall of celebrity memoir: a chronological litany of “and then this happened” without attention to crafting a cohesive narrative that grafts momentum and meaning onto experience. There is little sense here that Wainwright has ever kept a journal or diary; her memories are vague and scattershot, dishy but light on detail. They have the well-worn patina of oft-told tales among friends (Remember that time we did molly at Glastonbury? Man, we were so high!), and while they’re filled with familiar names, they’re not particularly meaningful.

“Martha Wainwright comes by some of her contradictions honestly.”

Although Wainwright’s early life is a string of fun times with music-world notables (one evening’s partying includes five famous sons of rock legends), all the crazy nights and bleary-eyed mornings are a bit wearying to read about. There’s little pleasure in living vicariously through someone who doesn’t seem to be truly enjoying the ride, who seems a bit out of control. And though the memoir’s title is accurate — Wainwright is not easy on herself or others — there’s a lack of self-reflection. She’s explicit one moment and coy the next. She acknowledges, for instance, that she’s a “mess,” but she fails to actually interrogate the instances when, after a night of heavy drinking, she had physical altercations with her aunt and her mother.

“Lorca and I used to be good friends, but no more,” she writes tantalizingly of Leonard Cohen’s daughter (who is also the mother of Rufus’s daughter, Viva). “Cross her and there is no coming back from it. If I were to paint her portrait, there would be a wide and deep backdrop of burned and still-burning bridges.” Later, she briefly observes that Rufus and Lorca’s decision to have a child together ruptured multiple friendships, but the lack of subsequent details makes one wonder why she’s mentioning it at all. Hinting feels like only a tease.

Wainwright’s family connections alone mean she moves in exalted company, and she drops many names. Her recollection of seeing Leonard Cohen at Lorca’s Los Angeles home is particularly wonderful: “Once, I saw him in the backyard in his fedora with a bowl of fruit neatly placed on a simple wooden chair beside him, a beautiful naked woman reclining on the edge of the hot tub nearby — as if every scene of his life was a photograph or a painting.”

Other celebrity references feel a bit braggy, as when she reports Jimmy Fallon’s attendance at her wedding: “We met through a mutual friend in the theater world and had immediately gotten very close. I must admit we had a thing for one another. Or maybe it was just me who had the thing, but he was pretty convincing.” Later, she describes Rufus’s nuptials with Jörn Weisbrodt as slightly more star-studded than hers in a way that sounds only half joking.

In her epilogue, Wainwright admits she’s written and rewritten Stories I Might Regret Telling You many times. Readers may be curious to know whether the previous iterations were as strongly coloured by her bitter 2018 divorce, which she first mentions on the book’s second page. Later chapters fairly bristle with hostility toward her ex-husband, Brad Albetta, the former bassist in her band, and her current animus clearly informs her memories of her early days with him. She imbues them with the dark shadows of hindsight, the implication being that she knew all along he wasn’t right for her.

She doesn’t shy away from detailing conflicts with her prodigiously talented parents and brother, either. Their personal grievances are tinged with professional jealousy, and vice versa. Recalling Rufus’s start as a cabaret artist in Montreal, Martha recounts admiringly how he captivated the room, with a mirror leaned against the piano —“an old show-biz trick” so that the audience could see his face. “With a face like Rufus’s, it really worked,” she writes, adding dryly, “And now he had a professional reason to spend time looking at himself, something he always loved to do.”

It’s no secret what an indifferent father Loudon was to Martha; he’s written about it himself in his own memoir. Martha’s most famous song, “Bloody Mother Fucking Asshole,” from her 2005 EP of the same name, was widely presumed to be about him. (She denies this: “The song is not ‘about’ my dad. He was just the springboard.”) What is surprising, perhaps, is how undermining and unsupportive Kate was, or at least how Martha often remembers her being. Kate fawned over Rufus and supported his career, while Martha was treated as the less loved, less talented second-born; her mother referred to her as “mediocre” on occasion, to her face. However, Kate also struggled with accepting her son as gay, an attitude that seems at odd with her hippie vibe and the bohemian way she raised her children. “She was wild, but she was wild within bounds,” Wainwright writes.

Nonetheless, Wainwright’s abiding, radiant love for her mother is clear, especially in the chapters dealing with Kate’s illness. Diagnosed with cancer in 2006, she died in 2010 at sixty-three. She lived long enough to meet her grandson Arcangelo, however. “She was truly, visibly dying by then,” Wainwright recalls of one of their final visits together. “It was almost as though she came to London in order to pass the baton to Arc before stopping the race herself, like a handoff, a transference of life.” It’s in detailing the circumstances of Arc’s birth that Wainwright is at her most vulnerable and open. Her first son, he was born premature and suffered a terrifying medical emergency; years later, her distress and fear remain palpable.

In moments like these, it seems almost churlish to criticize Stories I Might Regret Telling You, which is undeniably diverting and painfully honest. But the truth is that an open book is not always a great one.

Jill Wilson is a copy editor and arts reporter for the Winnipeg Free Press.