Raoul and Joséphine Dandurand were among the glamour couples of Edwardian Canada. He was a dashing senator for the division of De Lorimier, and she was a leading feminist and femme de lettres. He was Wilfrid Laurier’s Quebec homme de confiance, with contacts across the country, especially in business circles. She was belle époque brains and elegance personified — a perfect candidate to represent Canada at the Exposition universelle of 1900, in Paris. Together, Raoul and Joséphine were much admired, but their memory has long faded. Not even Sandra Gwyn referred to them in her superb The Private Capital: Ambition and Love in the Age of Macdonald and Laurier, which won a Governor General’s Award in 1984.

In addition to their exceptional careers in public service, the authors Marie Lavigne and Michèle Stanton‑Jean have contributed mightily to the writing of women’s history in Quebec, including with their 2017 biography of the suffrage pioneer Idola Saint‑Jean. With their latest, Joséphine Marchand et Raoul Dandurand, they help remind of a forgotten couple through appreciative analysis and talented storytelling. Dual biographies like this are valuable and rare, comparable to George Spater and Ian Parsons’s A Marriage of True Minds: An Intimate Portrait of Leonard and Virginia Woolf, from 1977; Rosemary Ashton’s Thomas & Jane Carlyle: Portrait of a Marriage, from 2002; and Terry Crowley’s Marriage of Minds: Isabel and Oscar Skelton Reinventing Canada, from 2003.

Born in 1861, Joséphine was the daughter of Félix-Gabriel Marchand and Hersélie Turgeon. The fourth of their eleven children, she was raised in St‑Jean, a prosperous little town southeast of Montreal that profited from the trade on the Richelieu River. For most of her childhood and adolescence, she attended the convent school run by the Congrégation de Notre-Dame and profoundly hated it. Her father was a gentleman farmer, notary, editor of the newspaper Le Franco-Canadien, a writer, and, not least, the local member of the Legislative Assembly of Quebec. Impeccably bilingual (his mother spoke to him only in English), Marchand considered himself a rouge, a radical Grit who advocated reforms of all sorts in the life of the province.

Joséphine had, like her father, a literary bent. She kept a journal most of her life and maintained a healthy and revealing correspondence, both of which are deftly handled by Lavigne and Stanton-Jean. Her body of work included dramatic comedies and essays on subjects of public interest, but she really shone when she wrote about the rights and place of women in society. 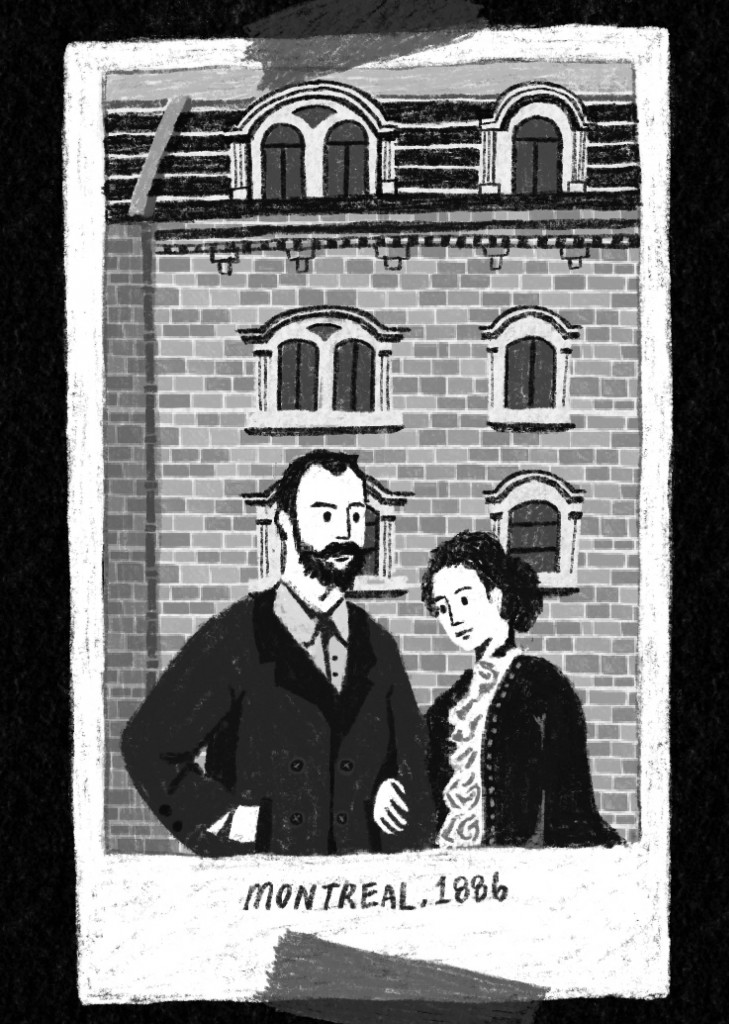 She published her first piece in 1879, a remarkable achievement for a young lady at the time, even if it appeared in her father’s newspaper. She went on to place material in many other publications, and she seemed to befriend all the leading Quebec authors. Her literary agent was none other than Honoré Mercier, the flamboyant leader of the provincial Liberal Party and the premier of Quebec from 1887 to 1891.

Joséphine met Raoul Dandurand (also born in 1861) in 1882, during a visit to Mercier’s house in Montreal. It wasn’t exactly love at first sight. She wasn’t looking for affection, and neither was he. But later that summer, when one of her first plays, Quand on s’aime, on se marie (When we love each other, we get married), was produced in St‑Jean, Raoul made a point of attending. Mr. “D” thus made his entry into her diary, though emotions remained distant. It would take two years for him to announce that he was in pursuit of her heart. There was a slight hitch when he finally did: Raoul came across as a bit of a radical himself. While Joséphine had her doubts about the Church and faith, she could not yoke herself to an atheist.

Raoul convinced her that he was a practising Catholic after all, and things took a turn in the summer of 1884, when passions erupted and commitments were secretly uttered. Arrangements were formalized the following summer (he even stole a kiss, something she regretted). They hoped to wed in Montreal later that year, but a smallpox epidemic delayed their plans. Instead, they were married on a bitterly cold morning in January 1886, in her hometown, and set off before noon to honeymoon in New York.

At twenty-five, Joséphine knew nothing about love. “Science and intelligence before love!” she wrote to her fiancé in November 1885, while everybody else was talking about the hanging of Louis Riel. Raoul likely had other ideas. The nuptial mysteries were revealed to Joséphine only a few months before she wed; Raoul, frustrated but kind, waited over a week before the consummation took place in Gotham. Her rage against such ignorance — the product, in her view, of an overly conservative society — would fuel her activism for the next forty years.

“The senate would be his political home for the next forty-four years.”

Raoul proved himself to be a rather traditional husband at first, quite content to give laundry directives to his wife, for example, but the couple’s power dynamics changed quickly. For one thing, Joséphine informed him, there would be only one child (born ten months after the wedding), and she expected their relationship to be governed by mutual respect.

In 1893, Joséphine gave a new voice to her independent views by founding and editing Le Coin du feu, a monthly magazine aimed at a female readership, the first of its kind in Canada. In it, she revealed herself as what we would today call a first-wave feminist: determined that women have a vote and a voice in politics; have the right to ride a bicycle; and, above all, have respect in the public sphere, including that of priests. “A woman’s brain is equal to a man’s,” she declared. Her convictions soon won over her husband, who would promote the rights of women for the rest of his life.

Raoul, meanwhile, developed a successful law practice in Montreal, busily collecting and serving a growing clientele. He wrote a few books and cultivated his political contacts among the Liberals and nationalistes in the Mercier government. In the early 1890s, he was called in by friends to sort out local political squabbles, and he discovered he was very good at delivering unlikely election victories. As Liberal popularity grew in Quebec, his services were increasingly in demand. He was asked to run for office several times but always resisted: he was too busy in law. Sir Wilfrid Laurier helped strike a happy medium in 1898, when he named Raoul Dandurand, still only thirty-five, to the Senate. It would be his political home for the next forty-four years.

Laurier came to rely on Raoul for advice, fundraising, and organization during his years in power, while the Dandurands became a fixture on the Ottawa and Quebec political, intellectual, and social scenes. Joséphine spoke English easily, and she was powerfully attracted to the feminism of Ishbel Hamilton-Gordon, Lady Aberdeen. The irrepressible wife of Lord Aberdeen, the governor general, Hamilton-Gordon used her influence to invigorate feminism in Canada.

In 1894, Joséphine addressed the first meeting of the National Council of Women of Canada. Speaking in English, she called for policy changes to support the arts — one of the many causes she championed throughout her career. She also volunteered her time with the Victorian Order of Nurses and the Oeuvre des livres gratuits project, which was dedicated to making free books available to impoverished children. She was outgoing, even exuberant, eager to learn and to share. For her troubles, she was viciously attacked in Quebec’s conservative press.

For his part, Raoul thrived in the three-ring circus that was his professional life. A workaholic, he often travelled for weeks at a time, away from the tony family home he had purchased on Sherbrooke Street West in Montreal (the building now houses the Galerie Eric Klinkhoff). He grew wealthy — in some eyes, suspiciously so — as his law practice and real estate investments flourished and as business and political interests seemed to converge so easily. Added to those tasks was service in the Senate. Finally, Raoul remained active in the politics of Montreal, where his talents as a political fixer were called upon routinely. Joséphine Marchand et Raoul Dandurand is comparatively weak on this topic, as Lavigne and Stanton-Jean don’t show a firm grasp of the tensions that ripped at the fabric of Liberal politics in Montreal and Quebec City and that demanded Raoul’s time.

The defeat of the Laurier Liberals in 1911 pushed the Dandurands into the background. Then Joséphine became mysteriously ill and, eventually, incapable of walking. The book does not offer a diagnosis — was it psoriatic arthritis or multiple sclerosis? — but Joséphine was a shut‑in by the end of the First World War. She died in 1925, at the age of sixty-four, after thirty-eight years of happy marriage (for decades, Raoul would sign letters to her as “your old lover”). Her funeral was attended by William Lyon Mackenzie King and numerous members of his federal cabinet as well as most of Montreal’s luminaries.

The Liberals’ return to power, in 1921, had helped revive Raoul’s political career. Mackenzie King liked Raoul enormously, making him government leader in the Senate and asking him to manage part of Canada’s foreign relations. Raoul Dandurand was Ottawa’s representative to the League of Nations, rising to serve as president of its assembly in 1925. From 1927 to 1930, he represented Canada on the league’s council, essentially its board of governors. He grew to love the organization and became its most eloquent promoter in this country. He died suddenly in March 1942, at age eighty. Today, Quebec’s leading think tank on international relations is named in his honour.

Patrice Dutil founded the Literary Review of Canada in 1991.

I expected better from the caption writers and proofreaders at the Literary Review of Canada. The drawing accompanying this piece claimed that the Dandurand home on Sherbrooke Street West was “tony.” It was no more “tony” than it was “micky” or “larry” or “percy.” It certainly was located in a high-class Montreal neighbourhood. That fact and the Dandurand achievements and fortune gave it a high tone. It was thus “toney,” not “tony.”

Mistakes such as this — along with sloppy writing, incorrect grammar, and negligent proofreading — are increasingly rampant, even in “national” newspapers such as the Globe and Mail and National Post. You can do better.