What we have been, or now are, we shall not be tomorrow.
— Ovid

In difficult situations, it is important to try to figure out what is going to happen next, especially if you have no idea. Anxiety is often the result. When you wake up and discover that you have become a horrendous insect, it’s wise to take a time out. A few deep breaths. Maybe a short snooze. The compound eyes will definitely be an adjustment.

I have been working from home for . . . well, a while now, and I can attest to a similar sense of disorientation. Especially in the mornings. “What has happened to me?” is a question with application to both a new thorax and the season-appropriate clothes I consider from the comfort of my pyjamas before getting out of bed. Both can involve a serious rethink. 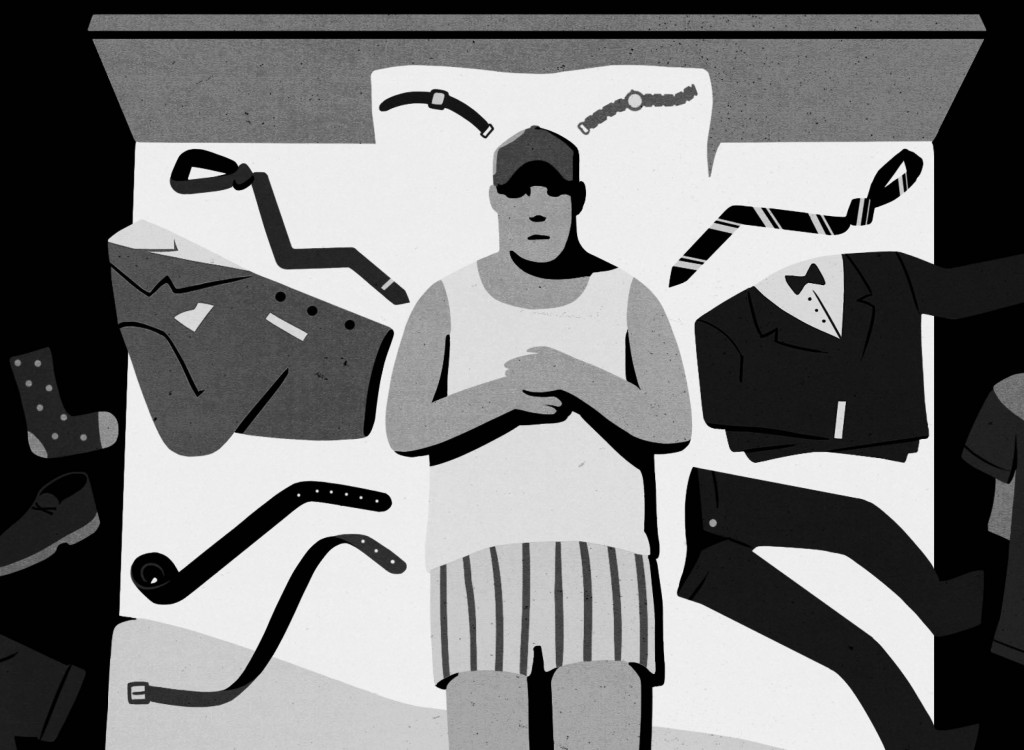 It was something of a shock.
Image by Min Gyo Chung

Stress is the silent killer, and if you don’t actually have to go anywhere, or see anybody, ever — if, in other words, you are a writer, the range of wardrobe possibilities you face each day can be disturbingly wide. It could include what you slept in. It could include what you’ve been sleeping in for . . . well, a while now. There are just too many options for the residentially employed. Bed is as good a place as any to weigh them.

In other respects, it was an ordinary beginning to an ordinary day. Another overcast dawn. Arterials backing up as arterials do. Yet as I lay in bed after a night of uneasy dreams and wondered what I was going to take out of my closet, I became aware that I was thinking in a way that was entirely different from the way I used to think. How had so profound a transformation taken place?

Take red ball caps. They were an early sign. (And I speak here as a former proud owner of a lovingly battered St. Louis Cardinals cap.) What was behind my personal boycott? Was it because I worried that a red ball cap, particularly a red ball cap of a very specific and altogether unpleasant nature, would make people think I was emulating you-know-who? Or that I was honouring the loathsome creep in the obscure way that grown men wear hockey jerseys? That seemed unlikely, I felt. He was too singularly awful for anyone not on Saturday Night Live to imitate. What next? Ties to my knees? No, what I worried about was looking like an asshole.

The language is regrettable. I understand that it may not be a word you expect to encounter in a publication such as this. In this instance, however, its usage is specific enough to risk offence. I beg your indulgence. Because not wanting to look like an asshole plays a vastly underrated role in what men choose to wear every day of their lives. For some, it’s the only standard applied.

Why no more red ball caps? Because I didn’t want to look like the kind of asshole who would wear a red ball cap, that’s why. And then I realized on that fateful morning that I was dressing specifically not to look like somebody. This was new. I’d been doing exactly the opposite for as long as I could remember.

“I might as well have grown antennae, an exoskeleton, and four more legs.”

As would be expected of a callow youth (the phase lasts a lot longer for men than we let on), part 1 of my life in clothes was about wearing things that made me look like somebody else. Not exactly, of course. Detailed replication was never a good idea, I learned in grade school. After I made the mistake of a Batman rain cape, my allusions to trends set by those whose style I admired were more subtle.

The low swagger of a belt buckle might be my only visual reference to how Bret Maverick wore a holster. I noted which striped trousers Brian Jones was wearing before selecting my own in the Teen Trends section of Eaton’s. When I recently went shopping for a suit, what I had in mind had to look good while running from a crop-duster.

There were always models to be emulated, fashion-wise. To my credit, they were not slavishly copied, Roger McGuinn’s tinted granny glasses excepted. The exemplars changed with age and fashion, but they were always there. I had Steve McQueen in mind when I pulled on a sweatshirt. Sean Connery was a presence when I rented a tuxedo. I probably did wear a tie around my waist once or twice during my undergraduate years, which seems a very Jeremy Irons way to hold up trousers.

My resemblance to these stars was lost on everyone but me. But that didn’t matter. I found their signals — from London, from Hollywood, from a motorcycle crossing the New Mexico desert, from a crumbling villa in the south of France — to be the only reliable guidance available as to what to wear. They were beacons in a sea of sartorial confusion. Should I turn up the collar of my white shirt? Well, let’s ask Alan Bates. I wasn’t sure about desert boots until I saw that Mick Jagger wore them. I’ve always thought Bernardo Bertolucci in a Borsalino is an image to keep in mind when buying a hat. And what’s the point of a trench coat that isn’t Alan Ladd’s? That’s what I wanted to know. Within the means available, and without alarming my immediate family unnecessarily, I did what I could to look a little bit like my style heroes. To this day: Why no vents in my suit jacket? I don’t know. Ask Cary Grant. There was a time when I dressed to be part of whatever style stream I thought I was dipping into. How long ago those happy days now seem.

Even before the morning when I came to understand that I was now dressing specifically to not look like people I don’t want to look like (which turns out to be almost everybody), I had developed some strong opinions about things I would never wear, even if you paid me. Are you kidding? Wraparound sunglasses? Cargo shorts? Goatees? At my age and with the hue of my ancestral blood in my grey and lifeless Scottish pallor, there are certain fashion decisions that are made for no reason other than to avoid being mistaken for a white supremacist.

A black Fred Perry twin tip? Right. It would go nicely with a Confederate flag shawl. Puff handkerchiefs? Forget it. You’d think I was trying to look like Piers Morgan. I recently sent a new pair of blue jeans to the dry cleaners by mistake. They are now laundered and pressed and unworn because they’d make me look like Ted Cruz flying to Mexico. And as a general rule: No Viking horns. Not even on Halloween. No suits that are two sizes too small.

These were not aesthetic decisions. Nor were they matters of taste. After all, who among us has not worn a flannel Eddie Bauer shirt on top of a Brooks Brothers oxford button-down à la Steve Bannon? What man of a certain age doesn’t think shaving is beneath him? I have to admit to myself that I have arrived at a point in my life in which wanting to look like Terence Stamp, as pertained to Julie Christie, has been replaced by not wanting to look like Steve Bannon, as pertains to Jordan Peterson. That morning — I was still in bed, still wondering what to wear — I was struck with the enormity of the change. I might as well have grown antennae, an exoskeleton, and four more legs.

Franz Kafka was never specific about what, exactly, Gregor Samsa turns into. Not a cockroach, apparently. The Metamorphosis was first published in 1915, in German, and “ungeheueren Ungeziefer” in its famous opening sentence has been a free-for-all for translators ever since. When Gregor awakes from uneasy dreams, he discovers that he has been transformed into a “horrific bug,” according to some. Others have said “gruesome pest.“ Or “monstrous vermin.” Nabokov thought it was more like a beetle.

I had a brave, overly optimistic English teacher in high school who put The Metamorphosis on the curriculum. I remember finding it unsettling. There was something so random (the word comes even more readily to high school students today) about the book’s central event. It was just plain weird that somebody would wake up so inexplicably changed. I wasn’t sure I got the point. But that’s the way things were in grade 13 English courses called “Existentialism and Absurdist Literature.”

Now, of course, all these years later, The Metamorphosis is unsettling because it doesn’t seem weird at all. “Hey,” my neighbour might say while we’re trying to keep the wildfires under control with our garden hoses. “Did you hear about Gregor? He’s a pancrustacean hexapod invertebrate.” And you know what? That might not be the weirdest thing I’d hear that day.

The point of a metamorphosis is that it’s a metamorphosis. What you are changing from — or into — is beside the point. An insect? Somebody obsessively devoted to not looking like Pierre Poilievre? Same diff. What is unsettling to the human soul is the dynamic of change, not its substance. Although my own metamorphosis was humdrum by comparison with Gregor’s, it was no less shocking to me. I’d been one thing all my life, and now I was something else. It would take some getting used to.