The poet George Elliott Clarke has won many awards and distinctions, but he has also found himself one of this country’s most excoriated writers in recent years. The backstory is a long one. In 1995, on the outskirts of Regina, Steven Tyler Kummerfield (“an ex-Crown minister’s grandson”) and Alex Ternowetsky (“a prof’s scion”) raped and murdered a young Indigenous mother named Pamela George. Some twenty years later, Kummerfield struck up a long-distance literary friendship with Clarke, who was completely unaware of the criminal past of his correspondent, now an aspiring poet. Not long after that, a new climate of guilt by association emerged, in which “hectoring, conjecturing rednecks — (some branded with protectorate doctorates)” could take up a bully pulpit and slander a figure like Clarke without compunction. “I praised good poetry by a bad man. / I wasn’t whitewashing Bloodshed. / I was trying to advise a poet — / not help him scrub up as sparkly as Liberace,” he explains in J’Accuse . . . !, a lengthy but formidable essay in verse.

Clarke, who has served as poet laureate of both Toronto and Parliament, was targeted by a contemporary horde that included the CBC reporter Bonnie Allen, the Toronto Star columnist Heather Mallick, and a gung-ho group of academics who formed something of a modern-day Inquisition: “(obscene rooks camouflaged as Kancel Kulturalists* ) — / would claw my preening books off library shelves, / would rip raw my quill-feathery attributes / down to the disjecta membra of persona non grata — .” The target of their wrath perhaps did himself no favours when he noted the possibility of quoting some of the offender’s verse at a scheduled academic conference, where Clarke was to be the guest speaker. Over the course of a two-hour interview with Allen, in early 2020, he refused to “say what he’ll say / in a lecture he hasn’t written.” He had to research further his topic of truth and reconciliation, Clarke pointed out, before he could actually decide on his talk’s shape and content. His accusers, however, assailed him for sounding flippant: “Thus suddenly unspeakable became my lecture — / yet unwritten, let alone unspoken. / The Ridiculous had become Sublime !”

It also didn’t help that Clarke had the wrong skin colour (“an off-colour Métis”) at a time of purity-seeking justice seekers. Nor did it seem to matter much to the “woke regime’s judge and jury” that the two actual criminals had seen their murder charges downgraded to manslaughter because

the trial judge — Ted Malone
(oft lambasted for alleged prejudicial, injudicious doublethink) —
ruled that because George was soliciting assignations,
she’d consented to sex acts the instant she’d assented
to get in the car,
and so she could not have been raped — per se.

Clarke was the principal target of criticism — as if the other players no longer mattered — but he’s no political or historical naïf. Throughout he makes numerous telling references, including this recollection:

P.E.T.’s 1969 “White Paper”—
its Putsch to bleach “Red People” into “White”;
and to liquid-paper-out the ruddy history
of the settler-wrought, mass die-offs of toddlers and pupils
(due to smallpox, TB, bone-show Starvation, and/or capital Battery )

Moreover, the poet points out, his own history as “a child of Struggle — / three-centuries Worth !” has helped position him as advocate, witness, victim. He reminds readers that his native Nova Scotia has its own racist past, just as Saskatchewan does. 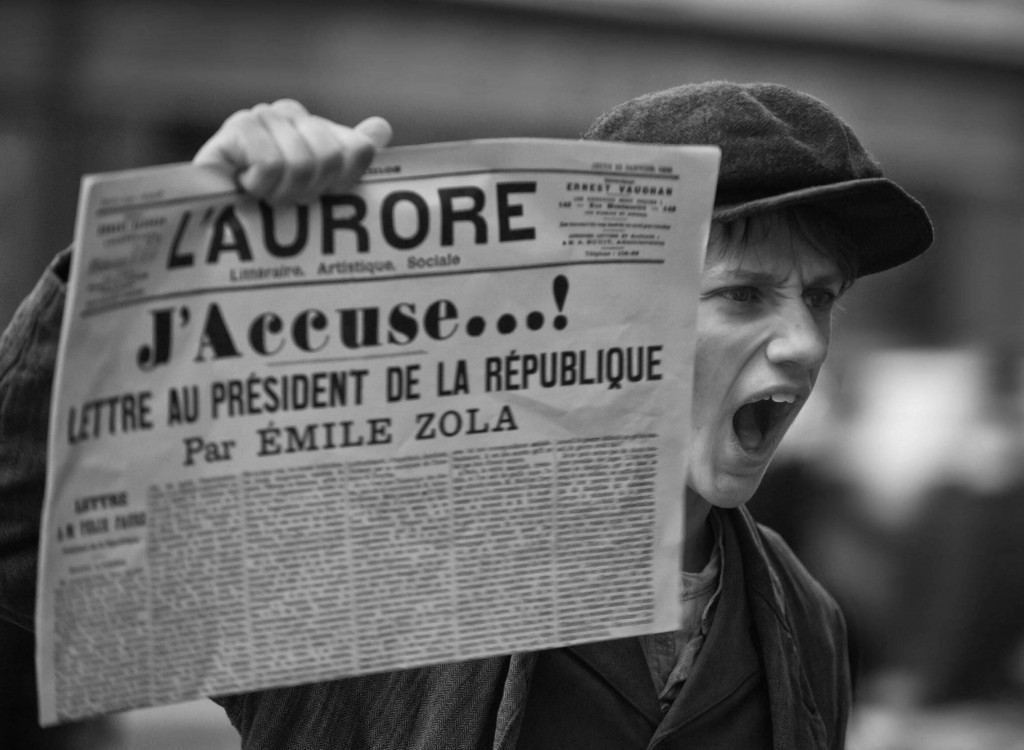 And so they shouted down a laureate.
Image by An Officer and a Spy, 2019; Legende Films; R. p. Productions; Alamy

Suddenly considered “a pariah poet, / a carious poet,” Clarke was “cancelled,” shouted down by the virulently self-righteous and permitted no fair hearing or defence — until now. J’Accuse . . . ! is an impassioned and technically daring piece of writing, which forces readers to confront many unpleasantnesses. Clarke borrows his title from the notorious Alfred Dreyfus case that scandalized the French Third Republic, but he shows how the obvious injustice of the George case is rancidly Canadian.

Reflecting on an imbroglio that he somehow survived, Clarke lends credence to the view that writing well is the best revenge. Just how well is, of course, open to discussion: one man’s meat can be another’s poison. But I can’t think of any other Canadian essay in verse — not even Dennis Lee’s Civil Elegies — with the same rambunctious acuity, skill in rhyme, roaring sonic ease, or sparkle. Casting himself as the poet Cinna — who is savagely killed in Shakespeare’s Julius Caesar by a mob who mistake him for a conspirator with the same name — Clarke clearly values poetry more than silence.

Consider the cover (designed in red, black, and white), the dedication to “three Indigenous martyrs” (Anna Mae Aquash, Helen Betty Osborne, and Pamela Jean George), the opening dirge (a hybrid spiritual), the Hitchcockian section titles (such as “Psycho” and “The Birds”), and the scholarly notes and documentation: this is a book that dares speak its own truth. Eschewing dandyism, academic puritanism, and bland good manners, Clarke displays some of Irving Layton’s sardonic vituperation. His literary antecedents — Swift, Pope, and Dryden, among others — are displaced in favour of persiflage with a very contemporary, very Afro-Canadian, Afro-Métis grittiness that combines high-powered lyricism (and some camp) with explosive satire. Shades of Jules Laforgue often come to the fore, especially because the substantial text (twelve main sections, framed by “Frontispieces” and “Backwords”) displays free verse that is alert, troubled, swaying, piquant, sometimes graced by a fluent elegance, and distinguished by rhymes co-opted to mock or instruct with sheer delight. The line lengths vary according to Clarke’s sense and purpose. And the diction ranges from the colloquial and demotic to the sophisticated and lyrical, drawing on Greek, Latin, French, and German when appropriate. A love of puns and other wordplay beats fervently throughout, with the poet’s virtuosity gleaming wittily — as in this example where the heavy consonance (with syllabic patterns) mimics a battering:

Disconsolate, discombobulated, disoriented,
I had to disown 14 years of discourse;
discontinue Comity, distance myself from Amity,
discourage any communication, discredit
a dishonest history, discard a cucaracha
Quasimodo, disbar his discrepant bonhomie.

Given his long-standing commitment to Indigenous rights and his generous mentorship of young poets, Clarke did not deserve the ire of “any dime-store Goebbels” or “their Panic or Fear / plaquing each in a Woke, insomniac bed — / their worries (gone scurrilous in each querulous head) / soon mounting La nouvelle trahison des clercs.” Thankfully, he did have a significant minority of supporters (whom he lists in a note) that included the Aga Khan Museum, the Association of Italian-Canadian Writers, the Delmore “Buddy” Daye Learning Institute, the Ontario Poetry Society, The Trinity Review, the University of Toronto, and Victoria University, as well as numerous individuals whom he salutes for “their rejection of Orwellian tactics.” But, he points out, “silent remained the League of Canadian Poets and the Writers’ Union of Canada.”

J’Accuse . . . !, while being a polemical rebuke of “Kancel Kultur,” shows how there’s little to gain by being publicly reviled and disgraced. But by railing against his failure to do a pre-emptive background check of Steven Kummerfield (who published work under the name Stephen Brown, including once in these pages), Clarke’s critics actually failed themselves in the matter of due diligence. Their own lack of careful research was a crime of omission. This sad case reveals how any writer of conscience can be railroaded, defamed, or worse by a reckless, unobjective condemnation that is utterly deficient in nuance. One hopes it can, at the very least, provoke necessary debate about uncomfortable social realities, including what any fair-minded person would recognize as collusive yellow journalism. And about how poetic craft can ultimately transcend the cheap, nasty headlines fashioned by those who cut their cloth to fit cheap popular taste.

I really enjoyed Keith Garebian’s review of George Elliott Clarke’s J’Accuse . . . ! I had heard about the accusations surrounding Clarke, but then the media moved on to a fresh controversy. I was unaware of how they impacted him in the long run. Garebian’s deft handling of a ­difficult topic is to be praised and is deserving of perhaps the best compliment a reader can give: it made me want to read Clarke’s book.