Ho-hum. Yes, I too acquired a pet during the pandemic. Formerly a cat person, I switched allegiances to canines when Tessa, an English cocker spaniel, came to live with us late in January 2021. She was eight weeks old, adorable, and lots of trouble, but what baby isn’t? Now almost two, she no longer chews rugs, tuques, and eyeglasses — knock on wood — although she remains an incorrigible swiper of shoes left on doorsteps, solitary gloves dropped on the floor, and underwear casually tossed onto piles of soiled laundry. She is also a retriever of twigs, tennis balls, and half-gnawed bones, which she buries under bushes in the backyard for future delectation or hides like land mines in the intricate patterns of our best Persian carpet. I share with my neighbours a futile hope that I will be able to curb her bounding morning barkfests as she defends our urban freehold against marauding squirrels, cats, and raccoons. Despite these annoying habits — well, maybe her hatred of raccoons is acceptable — I love her dearly. Belatedly, so does my husband, who is slow to accept change in most things, including household routines.

What I haven’t done during the pandemic is welcome an untamed animal into my life. And a good thing too, as COVID remains enough of a threat. Only days before I began The Animals, Cary Fagan’s cautionary tale about domesticating wild creatures, I read about Peter Eades, an Australian farmer and animal lover who was killed by the three-year-old male western grey kangaroo he had adopted as a pet. Apparently these Antipodean natives can grow as tall as two metres, weigh up to sixty kilograms, and wrestle you to the ground in a playful joust.

Tessa loves a rumble too, especially in the dog park with suddenly ubiquitous corgis (in what may be a homage to the late queen), but she sticks to her own species. Kangaroos, on the other hand, can rear up on their hind legs, kick with their feet, draw blood with their sharp claws, and trap humans in a headlock. If the result is fatal, who cares whether it is playfulness or a misguided mating ritual? Nobody knows precisely why Peter Eades was attacked by his marsupial, but emergency responders finally shot the boomer, which was preventing them from reaching the dying man. 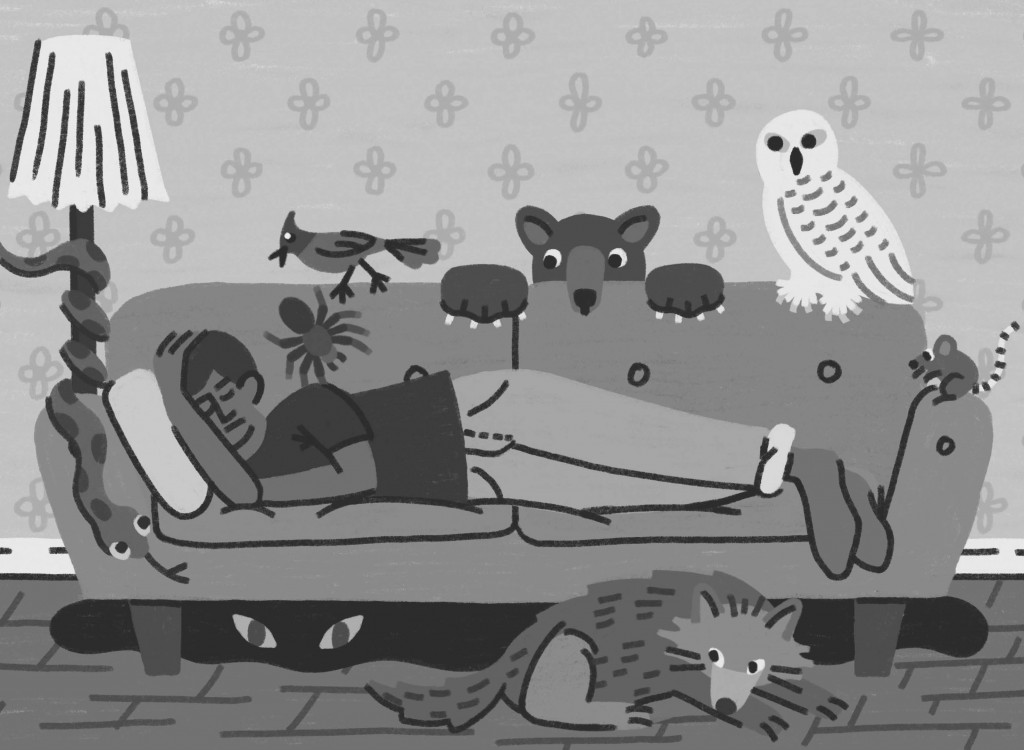 Are you alone in the house?
Image by Alex MacAskill

In Fagan’s short and addictive novel, all sorts of animals are being domesticated as pets through something called the Wild Home Animal Project. They represent a sanctioned yet mortal danger that a gullible citizenry is embracing because a bizarre social initiative has slid into being and become the norm.

The only person who seems oblivious to the weird project is Dorn, a dropout from architecture school who is self-employed as a maker of miniature scale models. These artworks are mostly commissioned by local shops and restaurants and displayed in their windows as emblems. As the book opens, Dorn is completing a model for a sex shop called the Velvet Touch, using his “finest brush to add shading to the man’s penis and then to the woman’s nipples” (a finishing touch that causes a stirring in his own gonads).

Dorn is thirty-seven, unattached, the elder son of a grumpy father who lives in the local old folks’ home, and the easy mark of a vain, misogynistic, and commercially successful younger brother. He lives in a village, which seems to be in England, and is in love with a “tall and willowy” long-haired educator named Ravenna, a former athlete who was once touted for the national team in the javelin throw. Like Dorn, she has toned down her ambitions, in her case abandoning her goal of representing her country at the Olympics, in favour of a more ordinary life as an elementary school teacher. Does Ravenna know about Dorn’s feelings? Hard to say, as the closest he has come to an overture is to show up at the local coffee shop, the Happy Café, when she is likely to be there, so he can engage her in a casual chat while she sips coffee and marks assignments.

When Dorn is not making models or mooning over Ravenna, he is reading an enormous volume called Vordram, a “medieval tombstone” of a book, according to Ravenna, that fortunately she doesn’t have to teach because it is part of the curriculum in the upper grades. Dorn, who finds Vordram ’s poetic style and thirteen-syllable lines fascinating, thinks it “illuminates the national character,” although he doesn’t reveal how. Over coffee with Ravenna, he relates a section of the book in which a half-starved woodcutter finds and eats an unusual fruit growing in the forest and then dreams he has sprouted large female breasts on his arms and legs. Suddenly, a dozen infants with wings fly down from the trees. They are “not angel-like at all,” says Dorn. They are “scary.” Each babe attaches itself to one of the woodcutter’s teats and starts sucking lustily. The woodcutter, appalled by “a normal maternal act,” as Ravenna points out, cuts off his own breasts. Disgusted by this assault on female body parts, the teacher gathers up her papers and heads back to her classroom of unruly children.

Poor befuddled Dorn keeps on reading as he finishes his coffee, buys a bag of beans for himself, and agrees to deliver another to a neighbour, Leev, who is mysteriously unable to leave his house. The reason becomes obvious after Dorn knocks on his neighbour’s door. Leev, lonely since his wife left him for the pleasures of city life, has succumbed to the Wild Home Animal Project. He has acquired a she-wolf, who has already torn his arm apart, as evidenced by the stitches Dorn observes when Leev cautiously opens his door a crack while simultaneously trying to restrain his new companion. The wolf, which, curiously, is not allowed to have a name (another contrast with our burgeoning domesticated pet population), is one of several wild animals, including a bear, a snowy owl, and a tarantula, that we meet in the pages of this decidedly postmodern novel.

Fagan is a prolific novelist, short story writer, and author of children’s books. This latest work, which oozes with oblique references to fairy tales, legends, and myths, doesn’t open with anything so coy as “Once upon a time” or end with “happily ever after.” That’s for us to dredge up from the recesses of our childhood memories. Instead, there is an adults-only sensuous adventure for Dorn’s father, which delivers a spanking to ageism, and enough storylines, including one that features Dorn as a hero, for readers to draw whatever conclusion they wish about his long-term romantic prospects with Ravenna.

At its heart, the novel is a puzzling and lively parable. Is Ravenna a substitute for Rapunzel, who stretches down her hair for the hero to use as a ladder to climb up a tower and rescue her? Is the woodcutter, in a tale that turns the Garden of Eden into a forest of horrors, an inversion of Little Red Riding Hood’s saviour? And why are wild animals encouraged as family pets? In a variation of inmates being in charge of the asylum, children, not adults, rule — not only in Ravenna’s classroom but in society.

The hapless Dorn learns the rationale for this queasy state of affairs when he chances to read a newspaper account that includes an interview with the unnamed village mayor, a minor character worthy of a cameo appearance in a Wes Anderson film for the way he extols the subversion of mainstream conventions and traditional experts. “We did not count on the influence they would have on their parents,” he says, crediting children for the “success” of the Wild Home Animal Project. “Kids these days are engaged and knowledgeable. They know all about climate change, pesticide damage, and poaching.” But do they understand the complexities of making an effective course change? Rather than thinking deeply about difficult problems, the mayor mouths platitudes. “Our children hold the key to the future of this planet,” he intones, as if youth by itself is a solution.

As a counterpoint to the political opportunism of the village’s duly elected leader, an aged and revered Atwoodian-style author named Horla delivers a strongly worded message about messing with nature. Dorn and Horla agree that the project is a mistake, but whether it is malicious or misguided is uncertain. Horla suggests that “sometimes there is evil and sometimes there is stupidity, and not infrequently the two are so close as to be impossible to tell apart.” Those are words the mayor would do well to heed before the wild animals devour the citizens who voted for him and perhaps finish him off too while they are rampaging.

I can’t help wondering if conceiving and writing The Animals is how Fagan occupied himself during the direst days of the pandemic. He pushed the “let’s get a pet” mania to a horrific extreme while some of us were endlessly saying, “Down, Tessa. Sit, Tessa. Good girl, Tessa.”

Sandra Martin is the author of A Good Death: Making the Most of Our Final Choices.