Looking for Alicia: The Unfinished Life of an Argentinian Rebel

With this fragmentary account of one of the countless victims of Argentina’s Dirty War, Marc Raboy gives readers two stories, one nested inside the other. The first is about a young woman, with the same last name as the author, who died at the hands of a bloodthirsty dictatorship in 1976; the other is about the author himself.

What prompts the desire to tell these stories, to spin this web? For Raboy, a former journalist and a retired professor of art history and communications studies at McGill University, it started with a tenuous link: a year-long visit to Buenos Aires that his Ukrainian grandfather made before he emigrated to Canada in the early twentieth century. Could Marc be related to the Raboys who still live in the Argentine capital? While there is some discussion of possible family affiliations through another putative Ukrainian ancestor, this topic soon recedes into the background of Looking for Alicia. What really sparked the author’s interest in writing this book was a Google search and the discovery of a woman, about his own age, who was “disappeared” in the early days of the military regime, which remained in power until 1983. Who was Alicia Raboy?

“I felt a strong and immediate kinship to Alicia,” Marc writes. But that kinship consisted of what? Other than a shared surname, it was primarily a “political and generational” affinity: born a month apart, both Marc and Alicia were involved in progressive politics, he at McGill (where I likely crossed paths with him, or at least attended some of the same demonstrations as he did) and she in the boiling cauldron of South American politics. 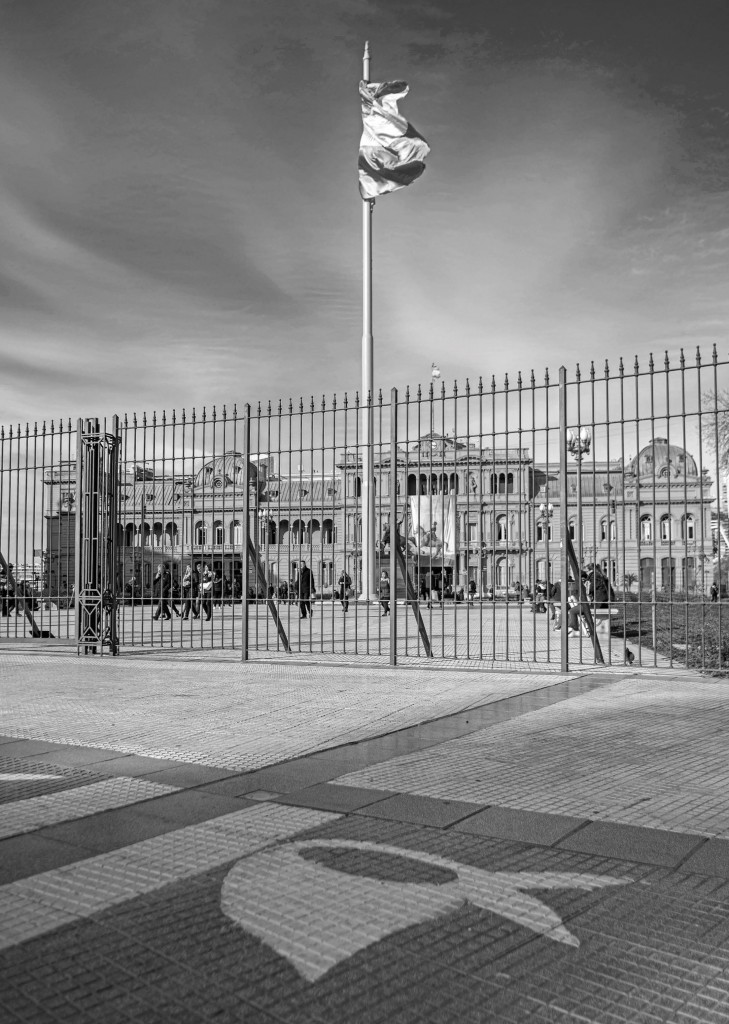 Readers will not find anything like a parallel trajectory here, despite the subjects’ shared surname, ethnic background, political sympathies, and journalistic interests. But that very fact renders the narrative more poignant.

Forty or fifty years ago, those of us in Canada who considered ourselves part of the international left were mostly on the outside looking in. Compared with numerous other countries, the Canadian state was relatively unmobilized. Elections continued. The police and the military did not run torture chambers and throw progressives out of helicopters.

To be sure, we went through the October Crisis in 1970. But after a brief flare‑up of ultra-leftism and Pierre Trudeau’s heavy-handed response, our government moved to replace the repressive War Measures Act with a softer version that requires parliamentary scrutiny of any emergency powers the government might give itself and guarantees Charter rights. In other words, we weren’t Vietnam, South Africa, Chile, or Argentina.

As the helpful timeline at the end of Looking for Alicia underscores, Argentina’s history since the Second World War has, until relatively recently, been turbulent, even chaotic: a series of coups, civilian regimes, and more coups, which culminated in the brutal, sadistic rule of a military junta. General Ibérico Saint Jean, who served as the governor of Buenos Aires Province for much of the dictatorship, summarized the military’s approach this way: “First we will kill all the subversives; then we will kill their collaborators; then . . . their sympathizers; then . . . those who remain indifferent; and finally we will kill the timid.” Another general, Luciano Menéndez, who supervised the ensuing bloodbath, had a similar take: “We are going to have to kill 50,000 people: 25,000 subversives, 20,000 sympathizers, and we will make 5,000 mistakes.” He was nearly as good as his word.

“Hovering above this turmoil was the spectre of Peronism.”

Hovering above this turmoil was the spectre of Peronism. Argentine politics since 1943 has been dominated by one man — even after his death in 1974. Juan Domingo Perón began as a reforming minister in a junta in 1943, was elected president in 1946, was re-elected in 1951, and was deposed by the military in 1955, which initiated more than two decades of escalating repression and armed resistance. Peronism, a unique form of populism that to some extent colours the country’s political landscape even to this day, soon became a floating signifier, a self-applied stamp of approval that traversed the ideological spectrum from fascist to far left.

Born in 1948, Alicia Raboy grew up in this pressure cooker. From a respectable family in the capital’s Villa Crespo neighbourhood, she was somewhat rebellious by nature. By fourteen, she was reading Marx and had joined the youth wing of the Communist Party of Argentina, one of the oldest Communist parties in the world (membership was still relatively risk-free at this point). She was tossed out of high school that same year, possibly for an essay on pregnancy and thalidomide, but she eventually enrolled at the University of Buenos Aires, in 1966.

A coup also took place in 1966. Military rule continued for seven years, while the university became a hotbed of leftist activity. Alicia, an engineering student, was in the forefront, organizing for the radical National Student Front. (Around the same time, in Montreal, Marc Raboy was helping to expose a professor’s collaboration with the American war effort in Vietnam; he was fired from the McGill Daily for his pains.)

Alicia became single-mindedly determined in her politics. She was “not a dove,” a fellow student recalls in the book. “She was very strong. She had the flame. She was our Joan of Arc.” Alicia was also, by all accounts, a joyful person, even flamboyant, with looks that turned heads and attracted lovers. As the political situation grew more intense, around 1970, the student group split apart, with her faction supporting armed insurrection against the dictatorship. Further splits and new groupings followed. As her older brother, Gabriel, told Marc, “The Left always divides in two.”

Tensions continued to mount, but Alicia found her political home in 1972, as an above-ground member of the Montoneros, a left-wing Peronist guerrilla group. A year later, Perón triumphantly returned from exile in Spain and handily won another election. Events moved swiftly after that.

While Perón had opportunistically supported his left-wing adherents during his eighteen-year absence, his true sympathies lay elsewhere. From the moment he set foot again in Argentina, open warfare broke out among the factions; right-wing militias opened fire on left-wing Peronists at his return rally at Buenos Aires’s Ezeiza Airport (roughly one in eight Argentines attended that day, likely including Alicia).

Perón’s former private secretary in Spain, José López Rega — who later became the minister of social welfare and oversaw a paramilitary death squad, the Argentine Anticommunist Alliance, behind the scenes — organized the Ezeiza Massacre. Perón himself called for “ideological purification” against Marxism and denounced the left at a May Day rally in 1974. The declaration marked a decisive break with his erstwhile Montonero allies, who marched out of Plaza de Mayo and went underground once more.

It had become increasingly dangerous, in fact, to be a progressive in Argentina, but the worst was yet to come. The Montoneros were still confident enough, if increasingly apprehensive, to found a high-quality newspaper, Noticias, where Alicia went to work. It was there that she met Francisco “Paco” Urondo, a noted Argentine writer and the newspaper’s editorial director. They soon became involved.

Another coup seemed inevitable. When it came, it swallowed Alicia up.”

Juan Perón died in 1974, and Isabel Perón, his third wife and vice-president, became Argentina’s new leader. She also was under the baleful influence of José López Rega, and repression accelerated. Noticias was shut down. In 1975, the new president declared a state of siege, and the military was given carte blanche to hunt “subversives.” The Montoneros, having already returned to guerrilla war after Perón’s death, were formally banned. Meanwhile, the population was suffering the ill effects of disastrous government economic policies.

“Another coup seemed inevitable. When it came in 1976, it swallowed Alicia up.

The Montoneros, as Marc Raboy makes clear, were a rough bunch: a puritanical, patriarchal, homophobic, rigidly hierarchal organization. Perhaps annoyed by Alicia and Paco’s independence of spirit, or possibly just detached from the situation on the ground, the leadership rusticated them and their newborn child to Mendoza Province, ostensibly to rebuild the shattered Montonero organization in western Argentina. It was a fool’s errand. Even before the coup, the region had been the site of clandestine detention centres and right-wing death squads; it was rocky soil in which to regrow a left-leaning guerrilla force. Paco and Alicia were being sent, deliberately or otherwise, to their deaths.

On June 17, 1976, Paco was duly murdered, and Alicia was disappeared into a torture dungeon. Their baby was taken to an orphanage, likely to be given to a military couple, but through some miracle she was recovered by Alicia’s family and adopted by a cousin. This child was Ángela Raboy, who later had her adoption revoked, reclaimed her birth name, and became an important source of information for Marc Raboy.

The junta fell apart in 1983, in good part because of Argentina’s humiliating defeat when it tried to retake the remote Malvinas — or Falkland Islands — from the United Kingdom. Successive civilian governments dithered, but finally they did the right thing: junta leaders were tried and jailed, along with many of their underlings. In 2011, four military officers were convicted of Paco’s premeditated homicide and Alicia’s “illegal deprivation of liberty.” They were sentenced to life in prison. More than 250 trials have taken place since 2005, in fact. And they’re still going on — nearly four decades after the junta’s collapse.

By telling the tale of one person’s political awakening — her commitment, her energy and optimism, and her fate — Marc Raboy makes a distant and dismal period of violence and fear accessible. “The number is important,” he writes of the dictatorship’s victims, “but there is nothing as concrete as a single missing person.”

As its title suggests, Looking for Alicia is as much about an author’s search as it is about a country’s history. Marc Raboy’s academic and journalistic training is readily apparent as he sorts through records, conducts numerous interviews, travels, observes, and surmises. The result is that Alicia reaches us through countless filters and lenses. She can be seen, but only from a distance. We never really know her. Her life is “unfinished,” in more ways than one.

“In the end the most horrifying aspect of Alicia’s story is her absence,” Marc writes. He is referring to her disappearance and erasure by the state, but in many ways that erasure is replicated in the book. This isn’t meant as a criticism of the author. He went looking, and he was able to find only so much. The rich personal, familial, and historical context he provides masks, to some extent, how little we are left knowing about Alicia — her lived life, her adventures, her thoughts. The authorities tortured and murdered her, made her disappear, and left us only a few shards of other people’s memories and documentary scraps, like clues at a crime scene. In these pages, despite Marc Raboy’s assiduous research, the junta has effectively killed Alicia Raboy for a second time.