Revolution and Dictatorship: The Violent Origins of Durable Authoritarianism

The death this August of Mikhail Gorbachev reminded many of the extraordinary collapse of the Soviet Union, which began when Estonia declared its sovereignty in November 1988. While most Sovietologists at the time regarded the Communist regime as senescent and corrupt, few had anticipated its complete demise. Then it all crumpled with remarkable speed. Gorbachev’s reforms, which the general secretary hoped would address deep political and economic weaknesses, had the unintended consequence of knocking the props out from under the party and the Soviet empire itself.

That empire had survived for seventy years, through famines, bloody purges, a world war, and the Cold War. This longevity may seem more remarkable than the U.S.S.R.’s eventual fall, but as Steven Levitsky and Lucan Way argue in Revolution and Dictatorship: The Violent Origins of Durable Authoritarianism, it was no accident. Such durability is a common characteristic of “radical revolutionary regimes.”

To build their historical and comparative argument, Levitsky and Way looked at the life spans of revolutionary and non-revolutionary autocracies. They identify 355 that have existed at some point since 1900 and deem twenty of them to be revolutionary. And these regimes, they show, tend to survive on average nearly three times as long as non-revolutionary ones. 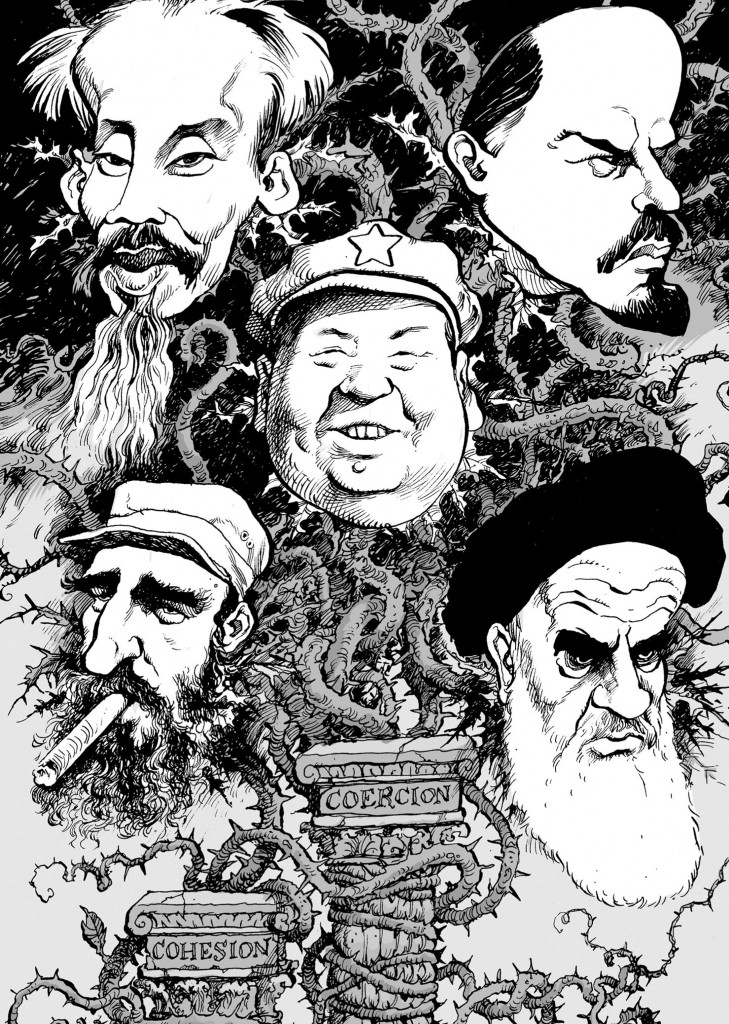 The three pillars of strongman survival.
Image by David Parkins

Revolutionary autocracies emerge through the “violent overthrow of an existing regime from below,” as well as “mass mobilization and state collapse, which triggers a rapid transformation of the state and the existing social order.” In some cases, early radicalism generates violent counter-revolutionary conflict. Regimes that survive this transitional chaos tend to possess three distinct characteristics: “elite cohesion, a powerful and loyal coercive apparatus, and the absence of alternative power centers.” These, Levitsky and Way argue, are the central pillars of durable dictatorial rule.

Not all of the twenty revolutionary regimes identified share these three characteristics, however. The revolution in Finland (1918) was quickly overturned by reactionary forces, while those in Hungary (1919), Cambodia (1975–79), and Afghanistan (1996–2001) succumbed to external intervention. Of the remainder, the authors distinguish between those that push through with their radical agendas and fight counter-revolutionary forces and those that temper their radicalism to accommodate powerful interests. The former develop all three pillars of revolutionary rule, whereas the latter fail to fully develop elite cohesion and coercive apparatuses or are unable to eliminate alternative power centres.

The authors describe revolutionary regimes that temper their radicalism as “accommodationist.” These include those that emerged following the Mexican, Algerian, Nicaraguan, Guinea-Bissau, and Bolivian revolutions. While accommodation might succeed in the short term, it leaves an autocracy vulnerable — and leads to significantly shorter lifespans than those of their more radical counterparts. Mexico, for example, eventually liberalized. The regimes in Bolivia and Guinea-Bissau fell to coups by disloyal armies. The Sandinistas in Nicaragua lost to an insurgency supported by American might. The Algerian regime is the sole survivor of this accommodationist group — and a bit of an outlier in that it showed a capacity for merciless crackdown in suppressing the Islamist movement in the 1990s.

“The most durable regimes follow the most radical revolutions.”

The most durable regimes follow the most radical revolutions, and Levitsky and Way describe how they become deeply consolidated. Typically emerging in weak states, ideological radicalism triggers a counter-revolutionary reaction, which poses “an existential threat that reinforces elite cohesion, encourages the development of a powerful and loyal coercive apparatus, and facilitates the destruction of rival organizations and independent centers of societal power.” This “reactive sequence” brings to mind the British historian Arnold Toynbee’s “challenge and response” theory on the rise and fall of civilizations.

The Communist revolutions in Russia, China, Vietnam, Cuba, and Albania; the Islamic revolutions in Iran and Afghanistan; and post-colonial revolutions in Angola, Rwanda, and Mozambique all modelled this behaviour. Other than Cuba, each country faced long and bloody fighting. Sometimes this occurred before a regime seized power, sometimes after, and oftentimes both. While the substance of Iran’s and Afghanistan’s religious revolutions differed completely from that of Communist uprisings, the reactive sequence was quite similar across the board. And though the character of the revolutions in Africa was more nationalist than ideological, they too fit the pattern.

Typically, the original elites of a revolution occupy key positions of power for decades and are bonded by a continuing sense of existential threat. With the exception of the Taliban being forced out of Afghanistan by American forces, these radical regimes are long-lived, despite major disasters and (often self-inflicted) challenges. Consider the Soviet famines and show trials; China’s Great Leap Forward, Cultural Revolution, and Tiananmen crisis; Vietnam’s wars with France, the United States, and China; Cuba’s harassment by Washington and the collapse of its Soviet aid; and Iran’s insurgency and war with Iraq.

Both political scientists, Levitsky and Way teach at Harvard University and the University of Toronto, respectively. (They previously collaborated on Competitive Authoritarianism: Hybrid Regimes after the Cold War, from 2010.) Their argument in Revolution and Dictatorship is clear and original: the revolutionary origins and early history of a regime are fundamental to its staying power. Those that survive counter-revolutionary conflict are more likely to develop the pillars of durability than those that initially follow an easier path.

More analysis of durable non-revolutionary autocracies would have rounded out Revolution and Dictatorship, especially since some of these have endured violent conflicts comparable with those of the radical revolutionary regimes. Think of Francisco Franco’s regime in Spain or the Kim regime in North Korea (which Levitsky and Way do not classify as a revolutionary movement, because it was initially imposed by the Soviets).

Given the contemporary focus on Xi Jinping’s China — which has certainly taken lessons from the Soviet Union’s demise thirty years ago — readers might ask what factors contribute to a revolutionary regime’s eventual collapse. Unfortunately, Levitsky and Way’s handling of dissolution is less satisfactory than their exploration of durability.

For example, the authors argue that the Eastern European countries with Communist governments imposed by the Soviets lacked the legitimacy of those with domestic revolutionary origins and were thus vulnerable to collapse, despite having all the instruments of state repression. But the archetypical indigenous revolutionary regime — the Soviet Union — was falling apart as well. Indeed, it was leading the way. So the authors’ explanations of various cases of collapse seem too ad hoc. Regarding Albania, Levitsky and Way note that the former regime suffered no coups, elite schisms, or serious social challenges, but they do not explain how it came undone. They view the Soviet regime of the mid-’80s as stable, though marked by pervasive cynicism and corruption, but “ideology and fear of counterrevolution no longer acted as a glue holding the system together.”

The demise of the Soviet regime was certainly tied to a loss of elite cohesion and to ideological rot, but institutional factors, which the authors underplay, were also important. Gorbachev’s reforms enabled alternative centres of power, and that led to a failed coup and then the larger collapse. As autocracies, both the U.S.S.R. and Yugoslavia had largely fictional federal systems under strong central control. As that control eased, local nationalist sentiments grew, and regional leaders took possession of major instruments of power, which they used to promote separation. While the story was relatively peaceful in the Soviet Union, it was bloody in Yugoslavia.

“Elite cohesion is often rooted in existential threats to group survival,” Levitsky and Way write. This seems true of China, where the upper echelons of the party were initially split during the Tiananmen crisis. When Deng Xiaoping and other hard-liners feared loss of control, they imposed a brutal crackdown. The reformist party secretary Zhao Ziyang, who had advocated an opening up similar to that of the Soviet Union, was purged along with his allies. More recently, Xi has shown a highly developed sense of existential threat, as he has imposed elite unity, ideological conformity, and harsh repression.

Levitsky and Way conclude by suggesting, “The demise of Marxism will undoubtably change the character of future social revolutions,” though that “does not mean the end of efforts to radically transform societies.” Indeed, the fragile states that have collapsed since the end of the Cold War create possible openings, notably for revolutionary regimes rooted in religious or nationalist ideologies. This prospect seems reasonable, but the durability of these revolutions would be open to question, especially considering that the current regimes in both Angola and Iran look increasingly vulnerable.

While the durability of some revolutionary regimes is remarkable, it is worth remembering that the world’s most resilient political regimes have been the liberal democracies, many with roots in the nineteenth century. And in what may seem a paradox, their sources of strength have been exactly the opposite of the three pillars that sustain revolutionary autocracies: elites are split, freedom is promoted, and opposition is plentiful. Nonetheless, the strength of democracies is increasingly in question, and concern is growing about backsliding, even in such citadels as the United States. In an earlier book, How Democracies Die, co-authored with his Harvard colleague Daniel Ziblatt, Levitsky showed how such autocratic behaviours as a weak commitment to democratic rules, denial of the legitimacy of political opponents, tolerance of violence, and curtailment of civil liberties can also corrupt democracies. No regime type is guaranteed immortality.