The Power of Story: On Truth, the Trickster, and New Fictions for a New Era

Our Voice of Fire: A Memoir of a Warrior Rising

Autobiography always entails a distance between two figures. There’s the narrator — the voice recounting the story of a life. And there’s the character — the person who is experiencing that life within the narrative. Yet the autobiographical act can also shape a life to come, which is a major theme running through Harold R. Johnson’s The Power of Story.

Johnson, who died in February 2022, lived many lives. He spent his childhood in his mother’s Cree community of “trappers and fishers.” As a teenager, he joined the Canadian navy as a marine engineer. Later, he became a miner, a “hard-working-provider-protector” to his family, then a Harvard-educated Crown prosecutor. Taken together, these different iterations make up what Johnson calls his “lifestory.” But the point, as he makes it, is not simply that he experienced a rich and varied life. Rather, it’s that “every time I changed the story I was telling myself, my life changed, sometimes in a fundamental way.” For Johnson, the power of story lies in its ability to both shape the future and recount the past.

Brandi Morin would likely agree. Like Johnson, she has lived many lives; she spent her childhood in foster care and her early adulthood as a single mom struggling with addiction and mental health issues. Amid these challenges, she became a journalist. With Our Voice of Fire, Morin relates these disparate realities, as she interweaves reminiscences of her career with memories of being a mother, daughter, community member, and intergenerational survivor of the residential school system. Morin observes how the stories she was told about herself exacerbated her early struggles: in one particularly wrenching scene, she discloses to a social worker that she was sexually assaulted, only to be told the assault was her fault. 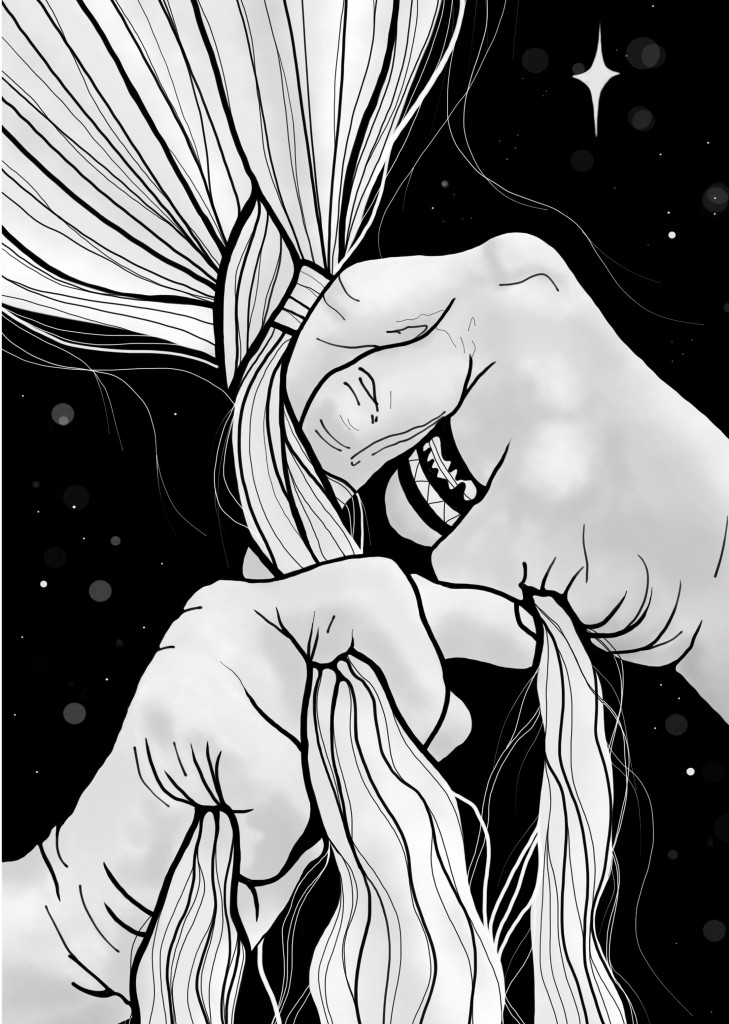 The intertwined arts of listening and telling.
Image by Mo Thunder Bedard

For Morin, as for Johnson, working as a storyteller has been transformative: becoming a journalist served as a route back to her heritage. After writing an Indigenous affairs column for a local paper in Alberta, she turned her researcher’s eye toward her own family and learned that her maternal grandmother’s community originated from unions between an Iroquois chief who travelled west and the Cree and Sekanaise women he married. This community’s land was seized by an Indian agent in the 1930s, and, as Morin eventually learned, the “convent” her maternal grandmother attended was in fact a Catholic residential school in St. Albert.

By taking the “macro view” and “calling the world’s attention to the devastation of inherited trauma on Indigenous peoples,” Morin ultimately lands upon the “micro view of all the ways it played out in my own life.” In doing so, she better understands her grandmother’s alcoholism, the volatility of her childhood home, and her own fraught relationships as an adult. Yet this is not just another memoir about an individual turning away from a tormented past to forge a new path for herself. Rather, Morin underscores the messy interdependence of community and family life.

Morin’s communal vision contrasts sharply with Johnson’s more individualistic ethos. Because he frequently deploys the second-person singular, The Power of Story can read like a set of directions: “You have your lifestory,” “You can edit a story after it’s told,” and “You can go back and make changes, important, relevant changes.” (This “you” is both the implied reader and an actual audience: the book is based on a talk that Johnson gave to an ecumenical society at his cabin in northern Saskatchewan.)

Johnson’s idea is a powerful one: that a person is not only the “author” but also the “editor” of his or her life, that reframing a narrative is enough to change it. It’s an idea with significant implications for an Indigenous person, who might turn the “victim story” into the “victimized story.” As Johnson writes, “It happened to you, but it is not who you are. You are still in charge of that. You can tell your own story.” Yet he also betrays an over-investment in the idea of life as individual authorship.

Good stories, Johnson claims, can cure disease and lengthen lives. But does this also mean that bad ones can aggravate disease and hasten death? Do people suffer simply because they have not adequately “edited” their life stories? Johnson literally says as much when describing the reader’s hypothetical end: “If in this moment you have regrets, it’s your own fault. You were the author.”

This heavy reliance on the power of individual choice is an unfortunate distraction in The Power of Story, one that sits in sharp contrast to Johnson’s overriding argument. “The dominant story right now,” he writes near the end of the book, “the one we need to change, is about the primacy of the individual and their personal rights.” He supports this argument most effectively not through sweeping claims made about the role of stories throughout human history but by turning to his own family, as Morin does to hers.

Johnson’s great-grandmother taught her daughters and granddaughters how to be good visitors and good storytellers. These intertwined arts are not merely domestic social protocol but are, he explains, the core of Woodland Cree governance — a system “based on storytelling, not on story-abiding.” This is the most compelling point of Johnson’s text, because we are indeed at an inflection point, a time of cultural upheaval. We need new stories to navigate this moment, and it makes complete sense to turn to those who are among the best storytellers, as Johnson shows the Cree to be. More than this, they are experts at reciprocal storytelling: narratives passed back and forth through visiting.

This same conceit informs Morin’s Our Voice of Fire. During her journey, as she learns about Indigenous histories, she comes to view her life story as intertwined with those of others, particularly other Indigenous women. Reflecting on something she wrote about Tina Fontaine, the teenager who was murdered in Winnipeg in 2014, she notes, “This was my life too. This was my story. It was our story.” In moving from the singular “I” to the plural “we,” Morin assumes a particular responsibility as a storyteller. In her candour, she calls on us, as readers, to be good visitors in her narrative.

Christina Turner is a postdoctoral fellow at the University of Manitoba. She lives in Toronto.